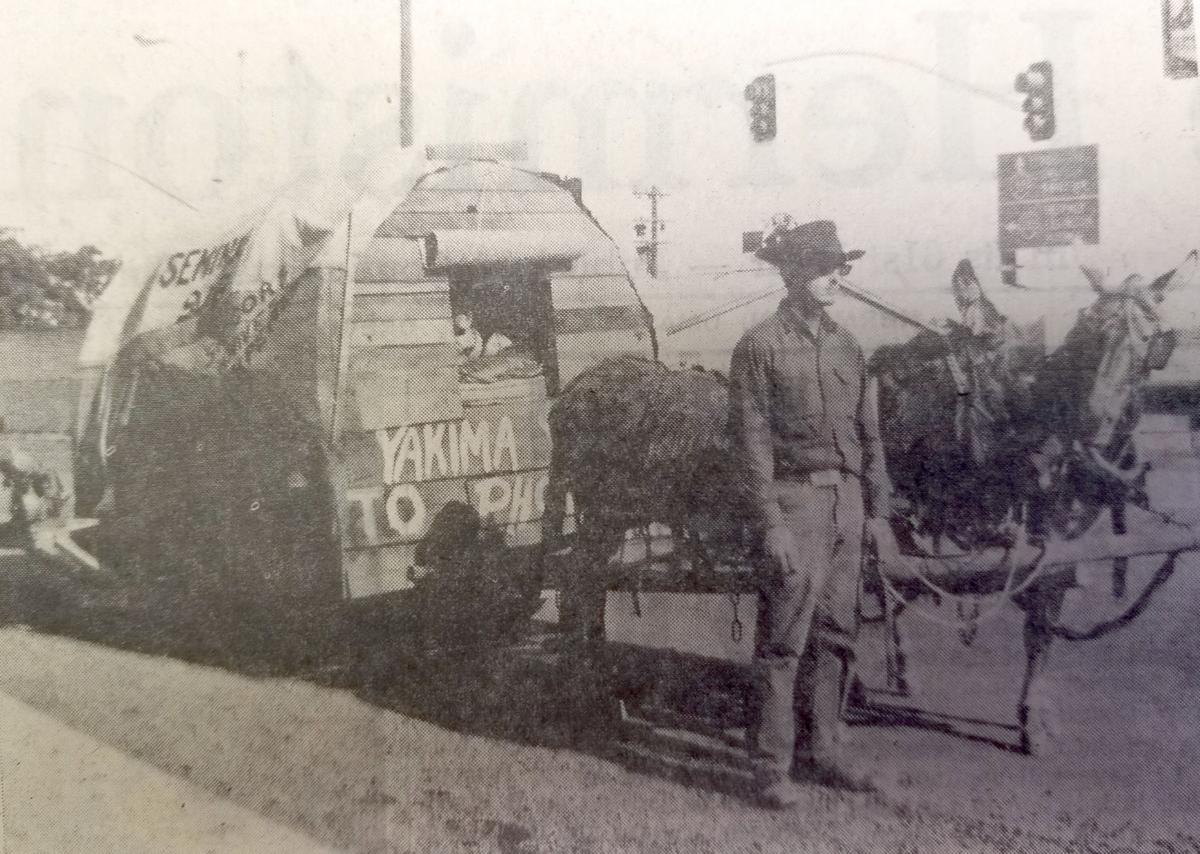 YAKIMA TO PHOENIX was the legend on the front of this wagon that passed through Hermiston last week. The owner identified himself as “Seminole Bob”, a long time wanderer. His wife Karen can be seen just inside the wagon. The small machine on the wagon's side is for Bob's trade, sharpening scissors, which helps support their wanderings.

YAKIMA TO PHOENIX was the legend on the front of this wagon that passed through Hermiston last week. The owner identified himself as “Seminole Bob”, a long time wanderer. His wife Karen can be seen just inside the wagon. The small machine on the wagon's side is for Bob's trade, sharpening scissors, which helps support their wanderings.

• Due to the intense heat and low rainfall, farmers are seeing an early harvest for spring crops. High water use crops such as watermelons are already being harvested across the area.

“It only takes so many heat units to grow a product,” said Tom Able, local farmer. ‘We’re already thousands of units ahead of last year. Watermelons are in the 3,000 range for heat units. Once they get ready you’ve got to bring them in. With all of the heat we’ve had this year, these just got ready.” Able said he planted the first group of watermelon plants on April 20, nearly a month before the end of frost season. “If you want to see a guy that plays poker, just try farming!”

• Winds gusting up to 60 miles per hour downed power lines and lightning started more than 25 grass fires across Umatilla and Morrow counties as a series of thunderstorms moved through the area Saturday and Sunday. Zane Suverly, meteorological technician with the national Weather Service in Pendleton, said a low pressure front moved moist air into the hot, high pressure system that is currently stalled over the Columbia Basin, causing the ferocious storms.

• Jeralyn Gardner of Hermiston was named Miss Umatilla County 1992 at the sixth annual county-wide scholarship pageant held in Armand Larive Junior High Auditorium Saturday evening. She was crowned by Andrea Reese of Hermiston, the 1991 title holder, before an eager crowd of about 200. “I’m really excited about being Miss Umatilla County,” she said. “But first some rest and ice cream sound really good.”

• Many of the citizens of Hermiston were treated to a strange sight Thursday and Friday of last week as a small wooden covered wagon, drawn by two donkeys and led by a bearded fellow in a cowboy hat , plodded slowly through town. According to words painted on the quonset shaped schooner, its journey was “Yakima to Phoenix.” This was affirmed by the driver, who identified himself only as “Seminole Bob”, originally from Tacoma, Wash., After spending Thursday night near the Dunes Motel, Bob and his new wife of just over a month, Karen, and their dog intended to continue their trek to Phoenix, Ariz., expecting to arrive there in September or November, or maybe December.

• District Judge Henry Kaye was appointed by Gov. Tom McCall Monday to the newly created second position as Circuit Judge of the 6th Judicial District, Umatilla and Morrow Counties. The appointment is effective July 1, Kaye will continue the probate jurisdiction in Umatilla County, which he held during his seven years as District Judge. The position of a second Circuit Judge for Umatilla and Morrow counties was created by the state Legislature in its recently concluded session. Judge Kaye will now be able to relieve Judge William Wells of part of his crowded agenda.

• The Umatilla County Housing Authority has called for bids for construction of 32 housing units to be located on B Street between Orchard and Hermiston Avenues in Hermiston.

• At a meeting of senior and junior wardens Wednesday night, it was decided to open a civilian defense control center in the vary near future. Hermiston coordinator, Sam Moore, was present and discussed various plans as to future activities of the local setup. Arm bands and other defense insignia has been ordered for use by Hermiston workers. The organization is becoming perfected rapidly and will soon be able to work efficiently in case of emergency.

• C.J. Jackson, 21 votes; N.R. Mueller, 21 write in votes; Mrs. Edith M. Fraker, 3 write-in votes. Mrs. Fraker wins. This oddity was the result of the annual election for School District U-9 held Monday at the high school. Mrs. Fraker receives the appointment because she represents the Cold Springs district which has not been represented for some years. Her term will be for five years. A.H. Norton easily won the election for a four-year term. Mrs. Fraker comes well recommended for the position. She has been connected with school work for many years and at one time was a candidate for county school superintendent.

• The U.S. Navy Cruiser No. 12102, a recruiting station on wheels with a fully equipped motorized trailer outfit, will visit Hermiston on July 2 for a one-day visit. The big land cruiser, immaculate within and without, is 9 by 50 feet and is equipped with a broadcasting system and a 16 mm motion picture projection machine. Free movies will be shown at night. “The Cruiser will bring a crew of four men, members of the Portland Recruiting Station personnel and immediately upon arrival will commence to operate as an active Recruiting Office. Applications for enlistment in the U.S. Navy or Naval Reserve will be received, and the applicants examined on the spot. Applicants who are accepted for enlistment will be given transportation to the main station in Portland where the oath of allegiance will be tendered by Lt. Cmdr. G.F. DeGrave, U.S. Navy, officer in charge of recruiting in this area.

• When the Red Cross was first organized in Hermiston the impression was general that men were not eligible. The ladies soon made it clear to the men that they could join and many have, Another source of membership is now quite apparent and also very gratifying. This is the number of children joining. Already a number of boys and girls have saved their pennies and nickels until a whole dollar was reached and proudly went to the secretary or membership committee to be enrolled. Most of these youngsters are under 10 years of age. Others have announced that they are saving and have almost a dollar.

• Last Saturday a deal was closed whereby the plant and business of The Hermiston Herald was sold by F.R. Reeves to M.D. O’Connell. Mr. O’Connell takes possession next Monday. He is an old newspaper man thoroughly experienced in the business. He is expected today. He comes here from Richland, Wash., and has a family of a wife and three sons. Mrs. O’Connell came Tuesday, returning Wednesday, to look around for a suitable home. It will probably be a month before the family moves.