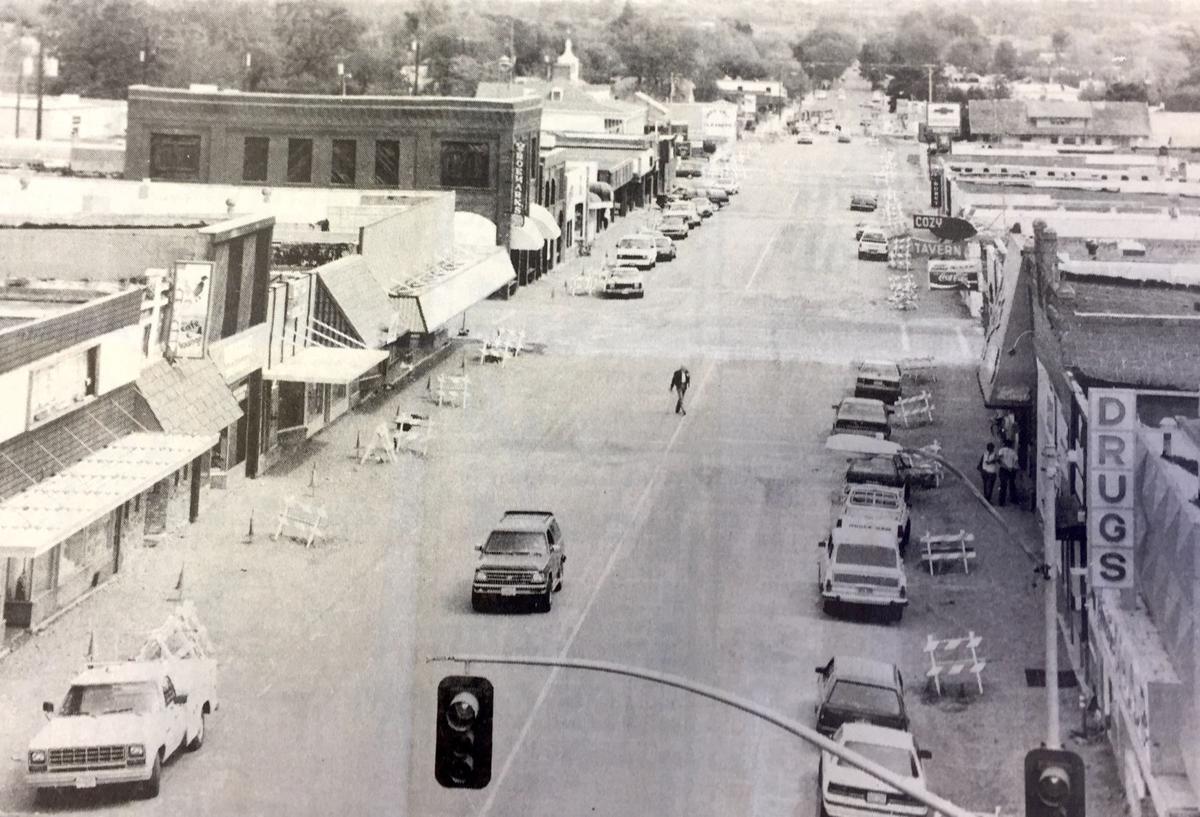 A project to renovate streets and sidewalks in downtown Hermiston brought out sidewalk superintendents of all kinds to survey the dilemma of a disabled loader stuck in a hole. 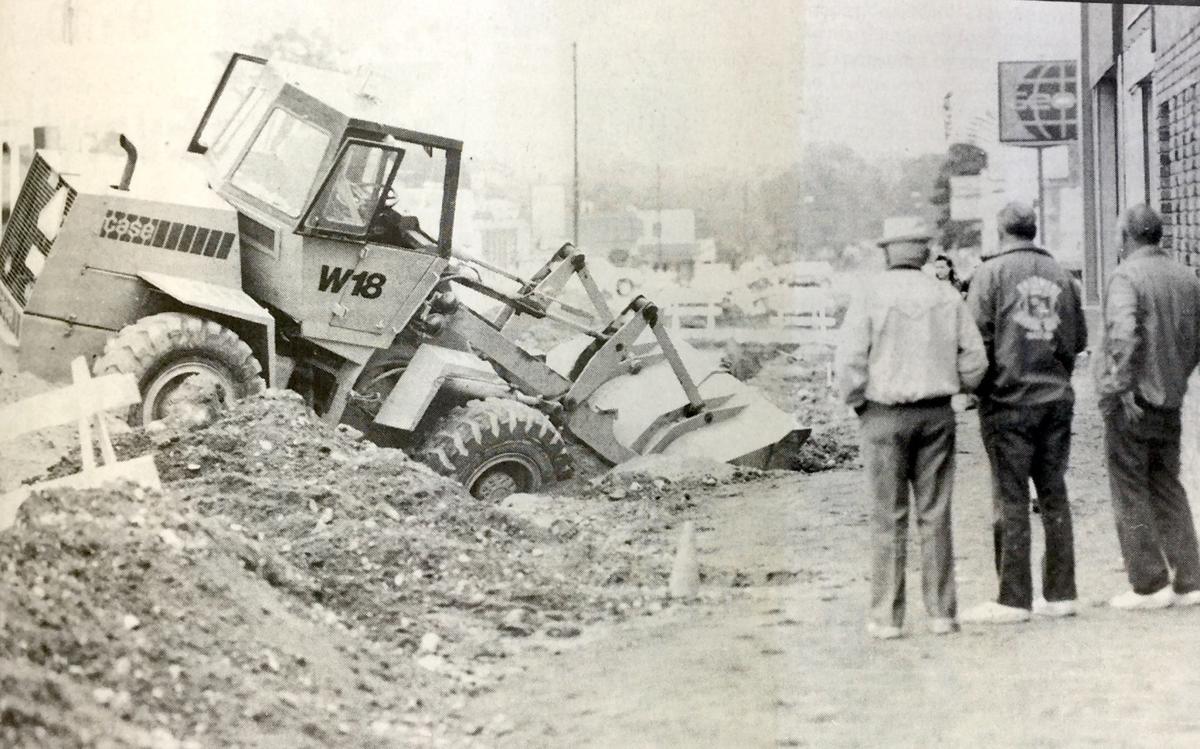 This is an elevated view of the disarray during construction on Main Street with barricades protecting work in progress.

A project to renovate streets and sidewalks in downtown Hermiston brought out sidewalk superintendents of all kinds to survey the dilemma of a disabled loader stuck in a hole.

This is an elevated view of the disarray during construction on Main Street with barricades protecting work in progress.

• Police and fire officials are investigating an arson fire Friday night that destroyed an Oregon state vehicle and damaged another car. Fire investigators say the blaze gutted a Plymouth Acclaim registered to the state Children’s Services Division and was intentionally set. The fire started at approximately 11 p.m. behind the Northwood Building at Beech St. “There are three kids that did this damage (to the cars),” Police Chief Grant Asher said.

• A semi- tractor trailer hauling agricultural products will tear through a ribbon barrier opening a new a new I-84 freeway interchange at 2 p.m. July 7th at the Paterson Ferry Interchange near Irrigon. The interchange is an example of community involvement making a change in how things get done, according to JX Wilson, Oregon Department of Transportation region engineer. “Individuals, county, state and federal officials and businesses joined forces to add this interchange to the I-84 system, Wilson said. The interchange is near the location of a historic ferry location on the Columbia River. “The location is called Paterson Ferry after the ferry that operated during the late days of the Oregon Trail.

• From a range of 75 feet, a police officer is required to hit a target three feet wide and achieve a near perfect score. Of course this is easier if an officer leisurely pull his gun out of his holster, sights his target and gently pulls the trigger. But most officers never have an opportunity to be so exact with their shots.

• According to Al Liebe of Hermiston, part time Umatilla Deputy sheriff’s deputy, a boating accident took place near the Shockman landing at Hat Rock State Park last Saturday, July 1, between 10 and 11 p.m. Liebe said that a sailboat was anchored for the night and the Morrison’s were about to board the sail boat from a canoe, when the sailboat was struck by a motorboat that apparently was unable to see the sailboat, Liebe said.

• Sale of the Roger J. Bounds Insurance Agency to the Schroth Insurance Agency was announced this week jointly by Doris S. Bounds and Norman Schroth. Decision to make this change, Mrs. Bounds said, was influenced by the fact that Mrs. Helen Howard, who has served as manager of the Bounds Insurance Agency, is retiring. The change in ownership was effective July 1. Schroth has been in the insurance business for 15 years. He said that he would continue to maintain his office at 411 Main street as well as being in his new location in the Inland Empire Bank building for sometime.

• At 1 p.m. Monday, July 3, Hermiston police discovered that somebody had smashed out the front door window at East Side Auto Parts, 505 E. Main. Fresh blood was noticed on the sidewalk in front of the door and fresh tire tracks going north on East 5th, according to Police Chief James Pollard. “We assumed that the person involved possibly became angry because the store was closed and knocked out the door with is fist,” Chief Pollard said. The owner was not immediately available so the police boarded up the broken window.

• Near flood conditions along the Umatilla River south of Echo resulted from the extremely heavy rains of last Thursday and Friday. An inch and a quarter fell here during the storm, and a rush of water down the east slope of the valley in the neighborhood of the Joe Ramos Jr. farm caused serious breaks in the Furnish ditch. The ditch was broken in six places, and a week or more will be required to repair the damage so that irrigation water can be turned into the canal. One square of alfalfa land on the Ramos place was covered with boulders and silt from a break.

• A total of 180 youths from ages 19 to 21 registered here Tuesday, according to JD Todd, who was in charge of the work. Only 93 of the 180 listed Umatilla County as their home address, the balance coming from outside. Of this group the 20 year olds will become subject to call for military service. Order numbers this time will be given according to dates of birth. A total of 968 registered in Umatilla County. Other figures listed were: Pendleton 254; Mission 9; Pilot Rock 39; Milton 240; Athena 206 and Stanfield 40.

• The army mule, long a standby for drawing escort wagons and other army vehicles but rather generally replaced a few years ago by motor transports, is now springing into the limelight as a beast of burden. Pack animals are assuming an increasing importance and because of this fact the Army Remount Service expects to begin the purchase of pack mules in the near future, probably about August 1, 1942.

• AR Coppock, chairman of the County USDA War Board, today appealed to the “pioneer neighborly spirit” of Umatilla County farmers, urging that they make their cars and trucks last longer by pooling their transportation whenever possible. He recalled the by-gone horse and buggy days when farmers, in going to town, always gave a ride to neighbors or did errands for them. This same cooperative spirit today will help “stretch” farm tires, save on repairs, and materially aid wartime food production and transportation, he declared.

• A committee of farmers of the Columbia district went to Pendleton Thursday morning by auto to interview the county court in regard to the needs of roads in that neighborhood. The committee claimed that most of the money set apart for use in their district has practically all been spent and a much larger appropriation is necessary to improve the roads for general use, and more particularly for the operation of the school buses. They contended that owing to the increased population of the district the school buses must travel great distances, and some of the roads over which they must go are nearly impassible. The county court promised to visit the district today and look over the situation, and , if possible, give some assistance.

• The members of Hermiston’s canning club are making valiant efforts to win the canning contest now being staged in this county. If they succeed they will go to the state fair and compete with the caning teams of other counties. Hermiston is the first town in Umatilla County to begin a canning club work. The local club established the record of being the first organized canning club to begin operations in this county. The young ladies of the club assembled Tuesday morning at the domestic science laboratory under direction of Mrs. Gunn and began canning, and to date have put up nearly 100 cans of cherries. In late summer the county competition will be held at a central point in the county and the winning team picked. Each team will be provided the same equipment and the scoring will be done on the following basis: Team work 20 points, skill 20, speed 20, neatness 20, finished product 20.

By the way: Tugboat sinks into Columbia River