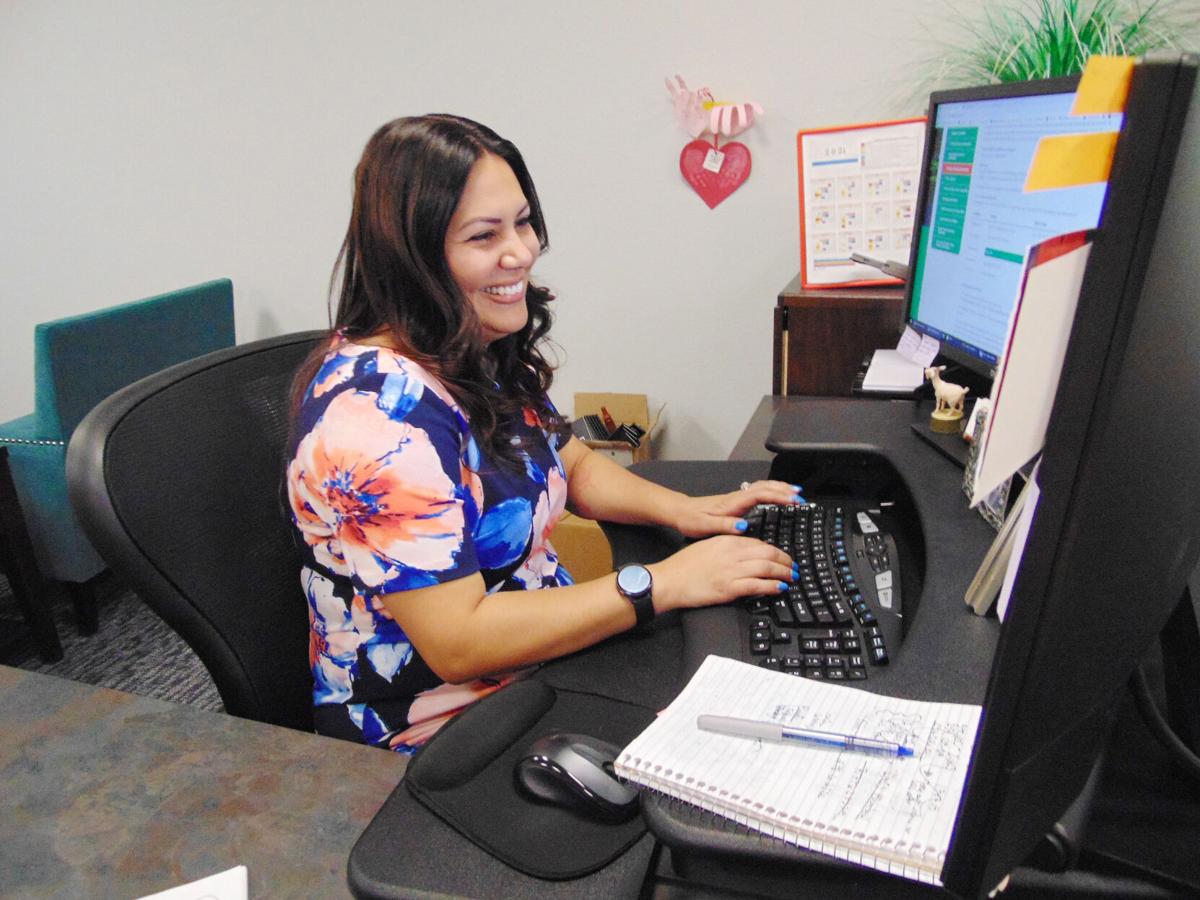 Lilly Alarcon-Strong is the city recorder for Hermiston and is a city representative for the Hispanic Advisory Committee. She was hard at work on Monday, Sept. 27, 2021. 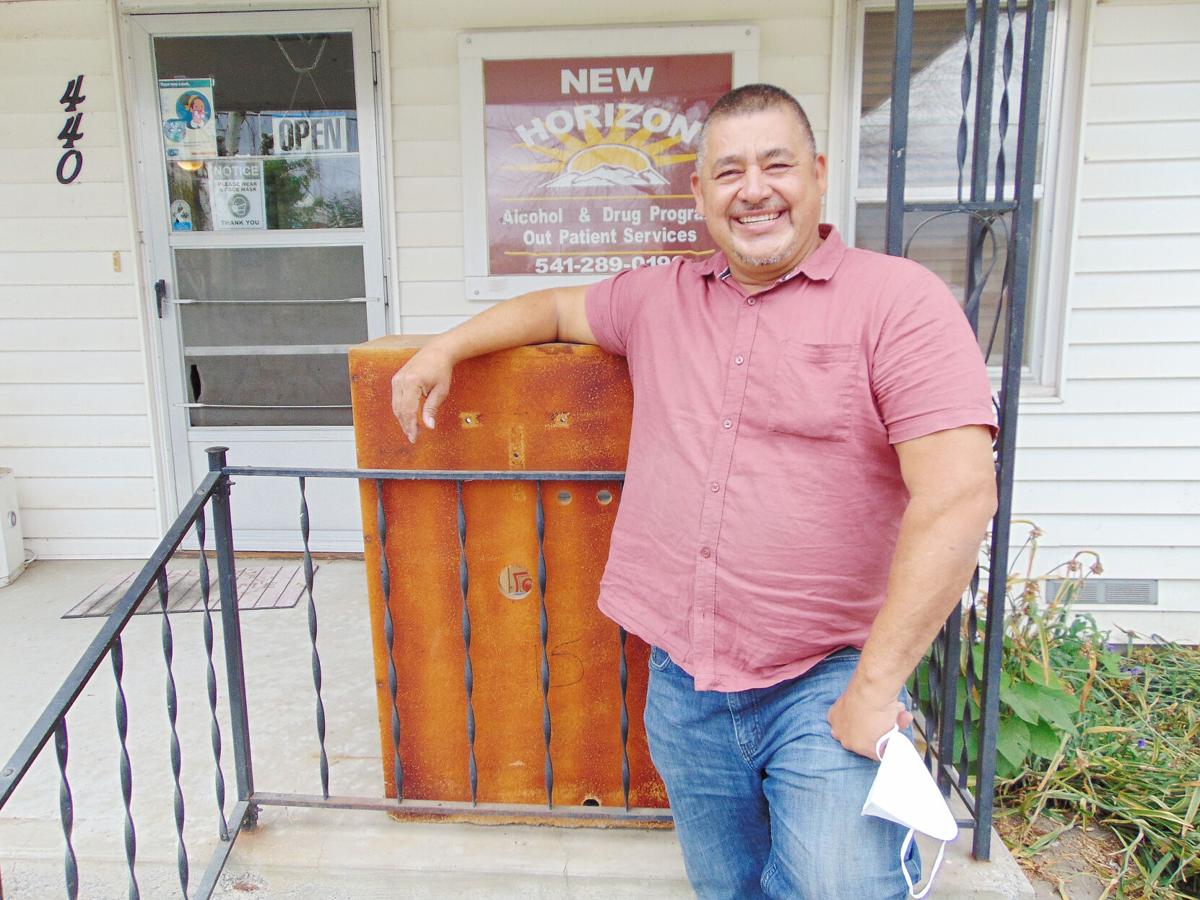 Jose Garcia, president of the Hispanic Advisory Committee, poses in front of his building on Monday, Sept. 27, 2021. He also is the program director of the New Horizon Alcohol and Drug Program in Hermiston. 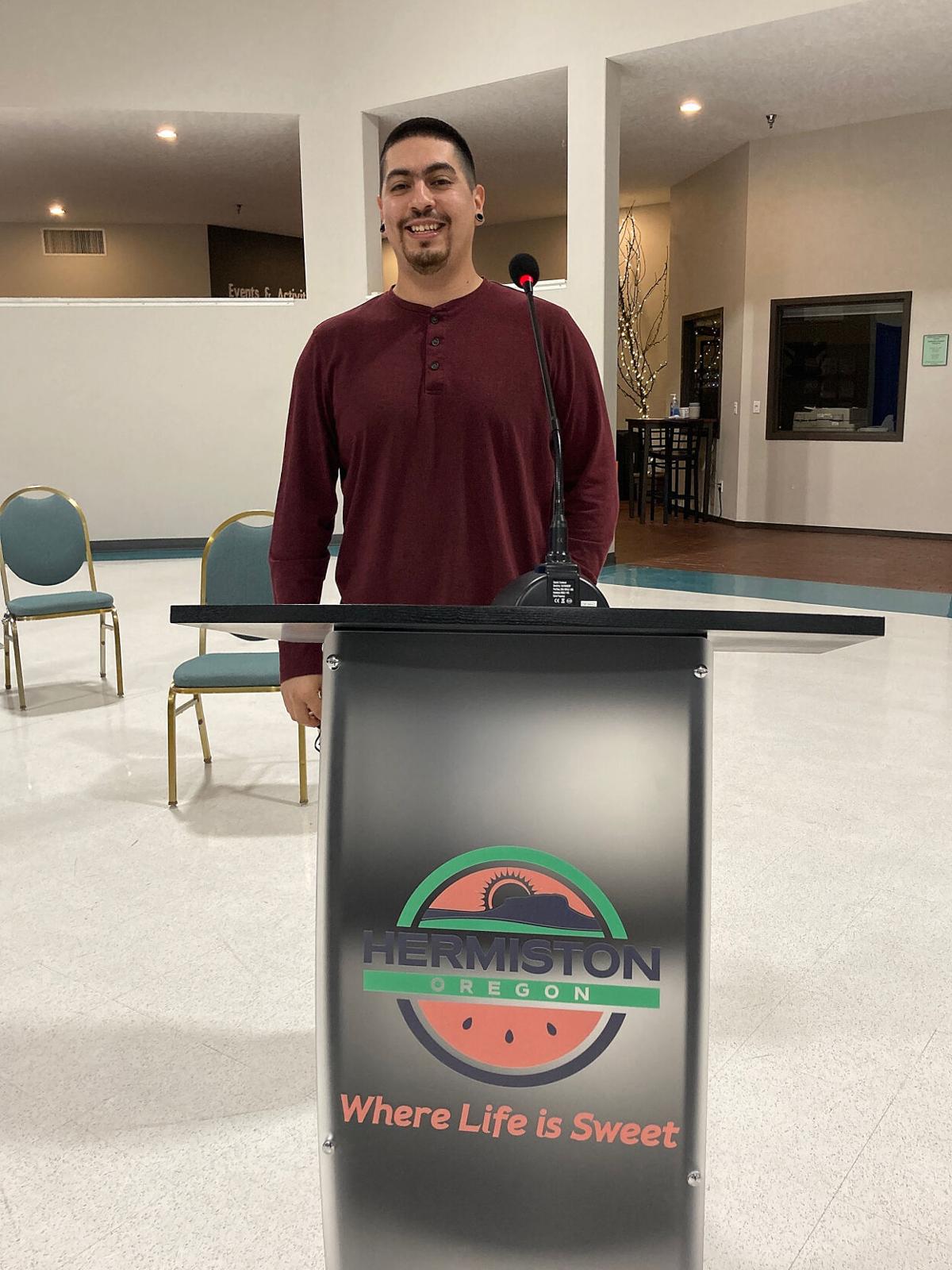 Agustin Vega-Peters, a Hermiston lawyer, is in the process of joining the Hispanic Advisory Committee. Here, he poses behind a lectern Monday, Sept. 27, 2021.

Lilly Alarcon-Strong is the city recorder for Hermiston and is a city representative for the Hispanic Advisory Committee. She was hard at work on Monday, Sept. 27, 2021.

Jose Garcia, president of the Hispanic Advisory Committee, poses in front of his building on Monday, Sept. 27, 2021. He also is the program director of the New Horizon Alcohol and Drug Program in Hermiston.

Agustin Vega-Peters, a Hermiston lawyer, is in the process of joining the Hispanic Advisory Committee. Here, he poses behind a lectern Monday, Sept. 27, 2021.

Hermiston is a better place because of Hermiston’s Hispanic Advisory Committee, according to committee members. As the nation celebrates Hispanic History Month, Aug. 15 to Sept. 15, HAC members reflected on their identities as Hispanic people and the role of their committee in Hermiston.

The goal of HAC is to solve problems and strengthen this community for everyone, according to the city’s website.

Jose Garcia, committee president since 2015, is proud of HAC and of his work on it. As president, he heads the group, which includes three other members — Mark Gomolski, Obdulia “Abby” Munoz-Reyes and Nazario “Naz” Rivera. A fifth member is likely to join the committee. A vacancy review board recommended Agustin Vega-Peters at the city council meeting Monday, Sept. 27.

Garcia, who runs a drug and alcohol program in Hermiston, said his friends caused him to join the Hispanic Advisory Committee. Before that, he was active in the Hispanic community in other ways. He coached soccer and served on a multicultural committee in Salem. His friends, though, suggested he should serve his local community rather than drive to Salem.

In 2014, he read an East Oregonian story about the committee, saw there was an open position and joined.

It is a good fit, he said. As an extrovert, he likes talking with people and making connections. Also, he is a problem solver who is concerned about Hispanic people. The New Horizon Alcohol and Drug Program, which he serves as program director, has many clients, several of which are Hispanic agricultural workers.

“I’ve been enjoying every minute of it,” Garcia said.

He said he likes helping his community and the city. The mayor, city council and department heads have all been solid partners, he said.

At every meeting, he thinks about HAC’s place in history. Some of the decisions, he said, may seem small, but they are significant. For instance, when the Funland Playground was built, the Parks and Recreation Department sought the committee’s input. The committee answered by inviting a local artist to paint a mural at the playground. This would make the attraction more inviting to Hispanic people.

Other issues are weightier. Immigration, for example, always is a big topic when it comes up at meetings. Garcia said there was a lot of fear about this issue, especially when Donald Trump became president.

Many people in his community were worried about mass deportations. Rumors spread about local police demanding to see documents and sending them to authorities in Tacoma for deportation.

HAC invited Jason Edmiston, Hermiston’s chief of police, to speak on these concerns to an audience of worried people. The chief told them they were not demanding documents or sending people away for deportation.

Garcia’s parents retired as migrant workers, and they believed their success was rooted in hard work. He admires their drive, he said, values the Hispanic people as “a driven community” and he intends to do more in the future.

Having recently joined the Hispanic Advisory Committee, Munoz-Reyes has only been to two meetings, but she cares about serving her community.

She works with the migrant education program for the InterMountain Education Service District, mostly helping agricultural and food processing workers. It is a job that relates to her work at HAC; she is serving the same people. The migrant program that covers Umatilla, Morrow, Baker, Union and Wallowa counties.

She said she wanted to join the committee because it aims to improve the lives of Hispanic people. She knows a lot about this community, and she thought she could help. One of the problems among Hispanic people, she said, is they are not always aware of resources available to them.

“We can bring resources to our families, even if it is only one time, it’s still something for them,” she said.

She said she is proud of being Hispanic and remembers struggling with learning English when she was a sixth grader and new to this country. Now, she works with students who also are having difficulty with English. Her goal is to continue to guide others and create connections for people.

Rivera, who has been a HAC member for nearly two years, was interested in the committee prior to joining it. He attended the meetings and believed in its mission. It was, he said, a good way to gain knowledge of the city and resources available. This was especially useful to him in his role as a community health worker; he was able to share information to his clients.

Rivera now is the public health director for Morrow County. He brings his experience to the committee, but he is not just interested in health-related topics. He has enjoyed discussing water prices, the Funland project and more.

Both of his parents come from Mexico, he is bilingual and he is proud of his Latin roots, but he was not always as proud as he is now. It was only in college, when he worked with different groups, that he connected more strongly with his community.

He said that it is easier to connect with his community on the west side of the state. There are more offices there to support Latin people, and more ways to be involved. He hopes he can develop more resources locally so Hermiston has more to offer Hispanic people.

Vega-Peters, an attorney, is under review to join the committee, but he is no stranger to it. Since the beginning of the year, he has been attending meetings as a spectator. He said one of the most interesting topics lately includes resources made available because of COVID-19. He also appreciated hearing about Martha’s House and Agape House.

He has a history of volunteerism, including helping out with high school camps for students interested in law. As he comes from Salem, he is new to Hermiston and hopes to learn of more ways to be involved in volunteer groups.

He works for Legal Aid Services of Oregon, providing free legal services. His work specifically is with local farm workers. In this committee, he said he wants to give insight into the law, though he realizes he has a lot to learn. People, he said, need to be heard; he intends to listen.

He said his heritage is somewhat complicated. As a “Mixteco,” he is an Indigenous Mexican, and does not usually identify as Hispanic. He does, however, enjoy Mexican culture — music, television, etc. And he speaks Spanish.

Gomolski is the vice chair of the committee, and he is the only white person on it. He has been on the committee for four years. Also the executive director of Eastern Oregon Mission, he supports Agape House and Martha’s House, Hermiston organizations that help needy people. As such, he works alongside many Hispanic people and has several Hispanic clients. He serves Hispanic people, he said.

Hispanic men and women have made a large impact on his life, he said. For example, his first employer was Hispanic. During the seven years he worked for him, the two became good friends. This boss invited him into his home often and made him a godfather to his child.

He also has learned to appreciate Hispanic culture, and he has learned how to cook Mexican food.

Though he does not speak Spanish, he wants to be a conduit between communities. He hopes, for example, to start a Hispanic art fair to the area. He would invite Hispanic artists and show other people the richness of this amazing culture.

She said she appreciates the committee because it gives Hispanic people an opportunity to be involved with their city. Not all people are comfortable talking with the city council or visiting city hall. While the committee meets in city hall, its members can engage with other people about issues in their own language as meetings are bilingual.

She said she looks forward to returning to a pre-pandemic situation. Before COVID-19, HAC meetings were lively and large. Sometimes, 50 or more people would attend the meetings. Nowadays, the Hispanic Advisory Committee might only draw a couple of visitors.

Meetings are the third Monday of each month, except June, July, August and December. Start time is 7 p.m. at city hall.