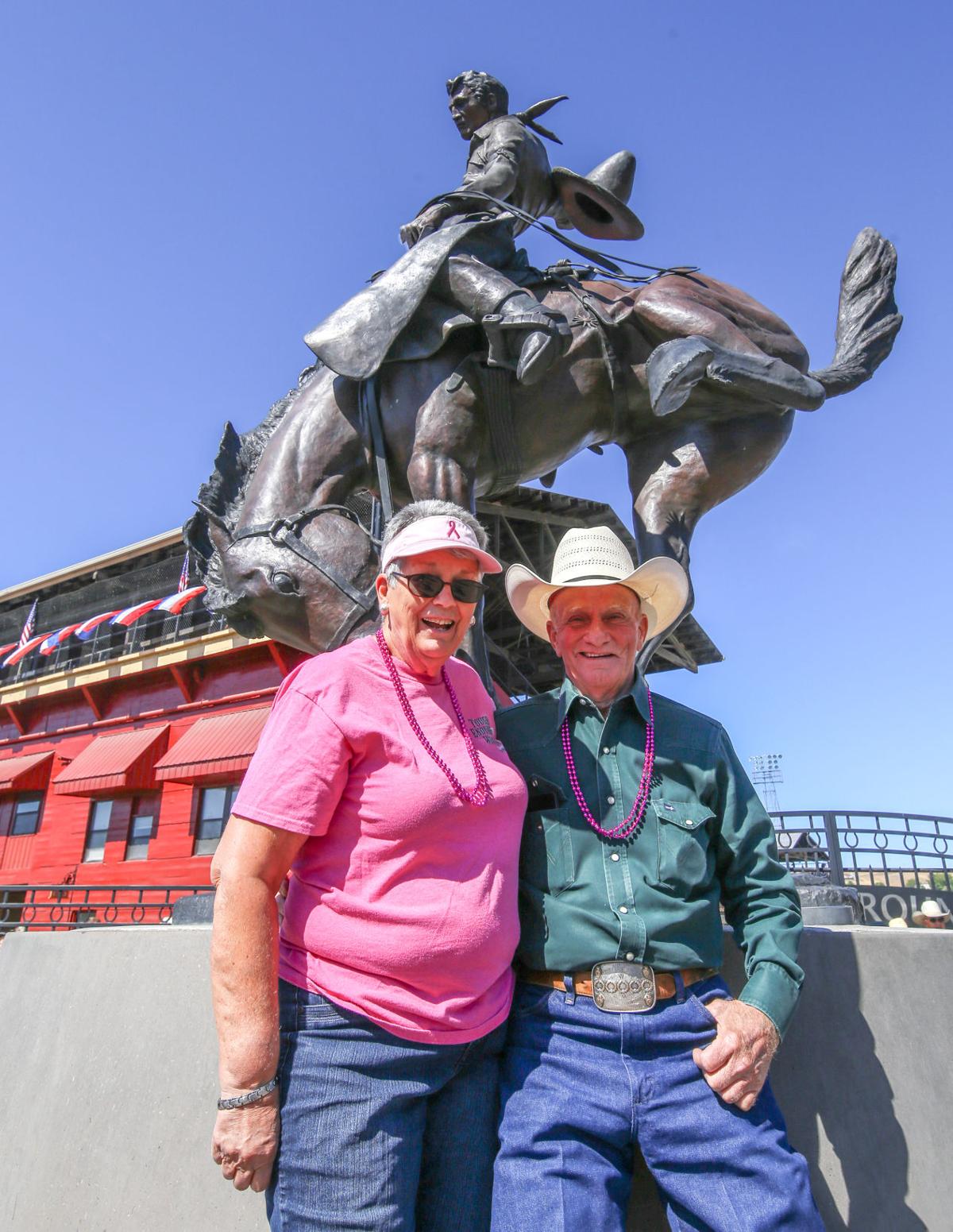 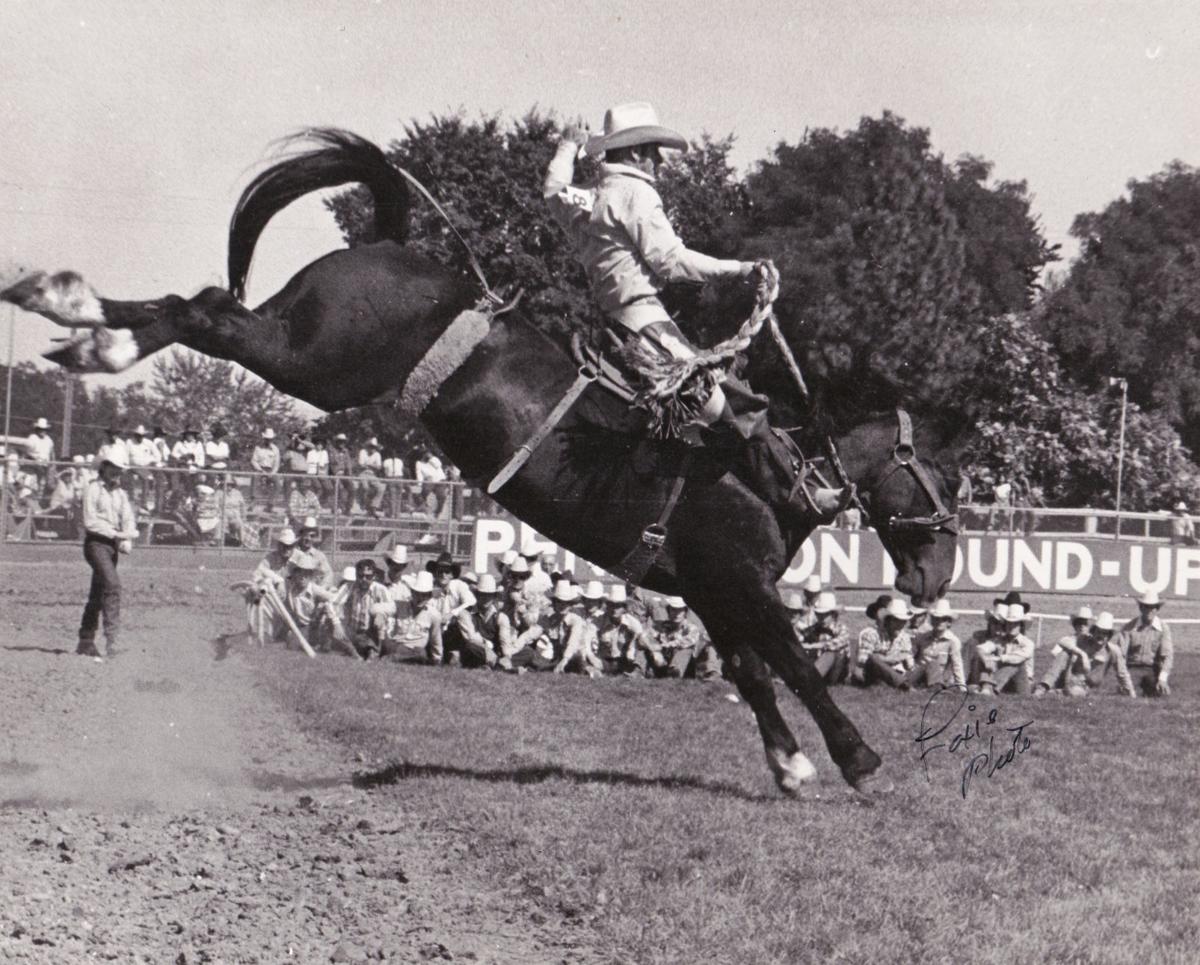 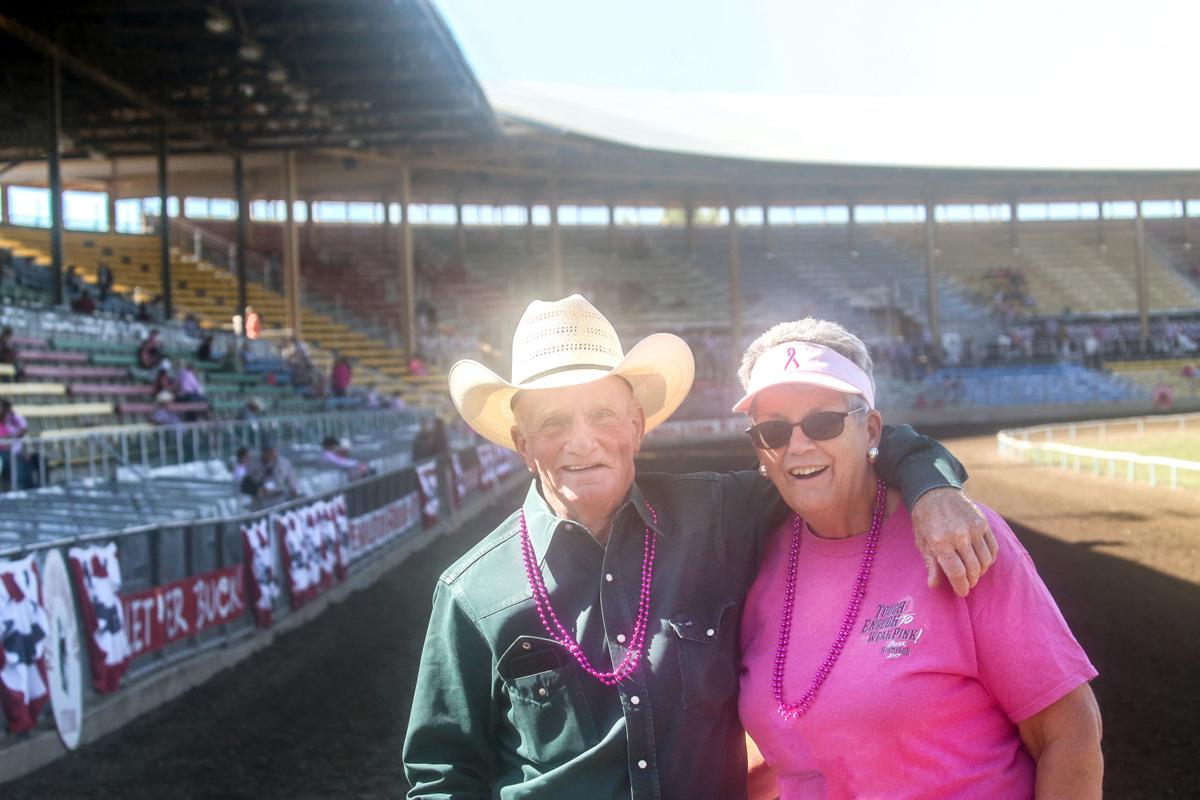 It all started with a horse named Starlight.

It was 1963. Edie Gottschalk and her family had just moved to Lewiston, Idaho, and she needed a place to board her horse.

The Old Lewiston Round-Up Grounds was the perfect place. It was there that Edie met aspiring cowboy Clyde Longfellow.

“I was boarding my horse, and was breaking them,” she said.

Clyde was a pretty smooth talker back then. They soon began dating, and married in 1965.

“She didn’t know my reputation,” Clyde said with a grin and a twinkle in his eye.

The Hermiston couple, which has given 54 years to the sport of rodeo, recently was rewarded for its dedication. Edie and Clyde will be inducted into the Idaho Rodeo Hall of Fame later this year, and Clyde, 77, was the parade grand marshal for the Lewiston Round-Up a couple of weeks ago.

“It’s quite flattering,” Clyde said. “You are just rolling along with your life, doing what you have to do. Both phone calls came on the same day. With word of mouth, everyone else knew before we did.”

Clyde opted not to ride in the carriage provided by the Lewiston rodeo committee during the parade. Instead, he and Edie rode horses.

While the honor was nice, royalty is not in Clyde’s blood.

On the rodeo trail

Clyde and Edie were newlyweds in 1965 when they hit the dusty trail to Cheyenne, Wyo. They had $25 to their name. Clyde won the amateur saddle bronc title, and they headed to the next rodeo.

“Our first trip to Denver, we slept in the car because we didn’t have money for a motel,” Clyde said. “The next morning, I turned the car on for heat and the radio came on. The guy said, ‘Welcome to mile-high Denver, it’s minus 11 degrees outside.’ “

Good thing the rodeo was indoors.

Clyde’s first professional rodeo was the Lewiston Round-Up. His first time riding in the Pendleton Round-Up was the mid-1960s. They are the two rodeos each year the couple never misses.

“It was the best life ever,” said Crystal, who lives in Hermiston. “I loved it from the beginning. I wouldn’t trade it for the world. I grew up around the big names back in the day — my dad’s friend’s kids were my friends.”

With a family to support, and a house payment to make, Clyde started driving truck for Star Motor Freight. He quit riding for a few years, but soon was back on the horses doing what he loved.

He kept his rodeos within the Columbia River Circuit, and reached the finals a few times.

In 1993, Clyde and Edie moved to Hermiston, and Clyde continued with Senior Pro Rodeo, and finished second in the world in 1998.

He had plans for a return in 1999, but it never happened.

While driving to Nampa, Idaho, with a truck load of cattle, he was hit head-on by another semi truck. Clyde was severely injured, cattle were killed, and his truck was totaled.

That was the end of his rodeo career, but not his love of rodeo.

At the Pendleton Round-Up last week (he and Edie have lifetime passes to PRCA rodeos), he was everywhere from behind the bucking chutes to the Let ‘er Buck Room. There wasn’t a stranger in the midst.

Though he enjoyed many years of competing, he never made the National Finals Rodeo.

“He just missed out,” Edie said. “He was 16th one year. One of the secretaries didn’t get results sent in. That was kind of depressing.”

When he isn’t at a rodeo, he likes to golf and take his sailboat out on the river.

In addition to raising a family and joining her husband on the road, Edie, 74, began helping rodeo secretaries.

That soon turned into a job — one she has enjoyed for 52 years. One of the first guys she processed for a rodeo was eight-time world champion calf roper Dean Oliver.

Edie came in on the ground floor with the Columbia River Circuit in 1975, and most recently was the circuit treasurer.

“The time, effort and lifetime passion she has for the sport, I wish we had more like her,” CRC president Rowdy Barry said. “She is all things rodeo. She knows the rules, the bylaws.”

Edie also will give Barry a kick in the pants, something he said he needs every now and again.

“Edie is always prodding me to get something done,” Barry said. “I appreciate that. She lives and breathes it, and doesn’t want the acknowledgement.”

And for as much as she keeps things running behind the scenes, she’s also like a den mother, if you will, to the cowboys on the circuit.

“She’s there when wayward young cowboys need straightening out, but she’s also there for an attaboy,” Barry said.

“We got to do what we wanted to our whole lives,” Edie said.

Last month, Edie was named one of the finalist for the PRCA Donita Barnes Lifetime Achievement Award. Clyde proudly offered up the information. She will find out in December if she won.

“It’s nice to be recognized,” she said.

Edie has helped several people to become rodeo secretaries, including her daughter Crystal. She also has worked for several top livestock contractors over the years, including Flying Five, Big Bend, Corey & Lange and Beard Rodeos, just to name a few.

“My mom had me helping out when I was old enough to be a help and not a hinderance,” Crystal said.

When she isn’t working, they travel to watch their granddaughter Makayla compete at rodeos, and they make several visits a year to Lewiston to visit family and friends. Makayla will live with her grandparents this year while she attends Blue Mountain Community College and competes on the rodeo team.

Edie makes the annual trek to Las Vegas for the NFR, but Clyde isn’t a big fan of all the people, and opts to stay home.