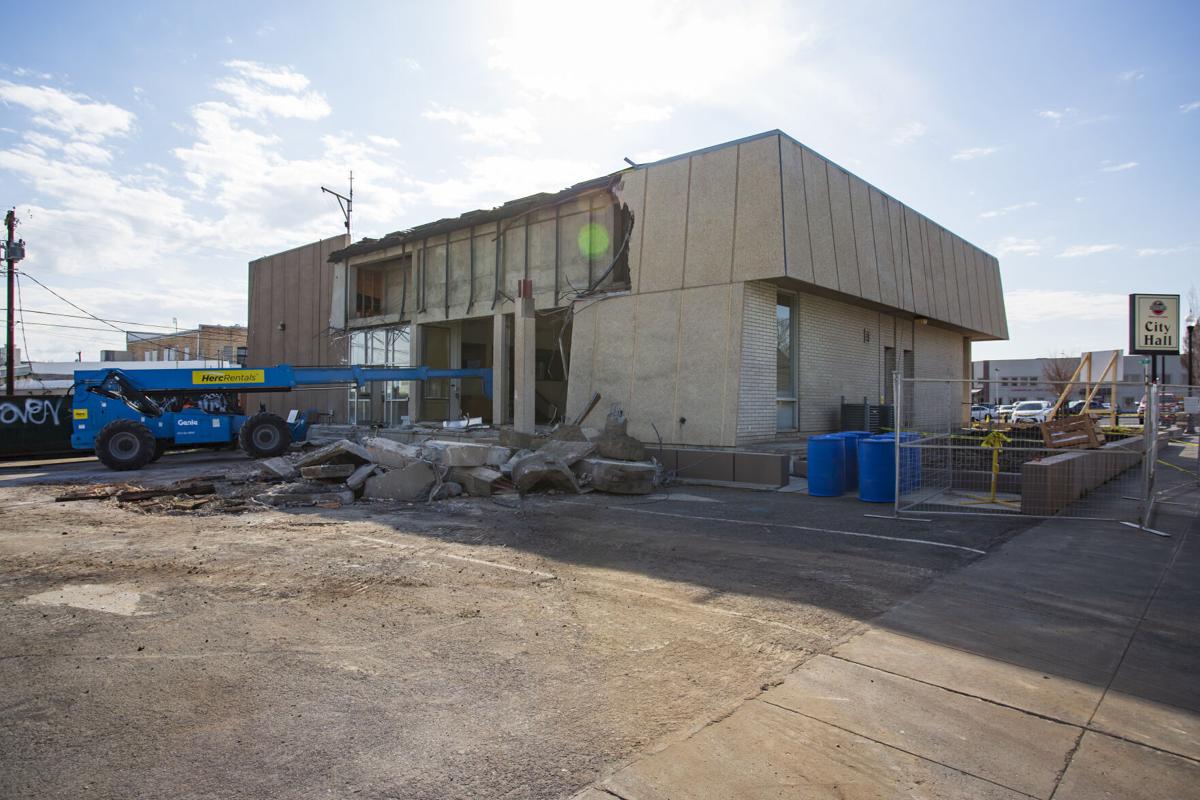 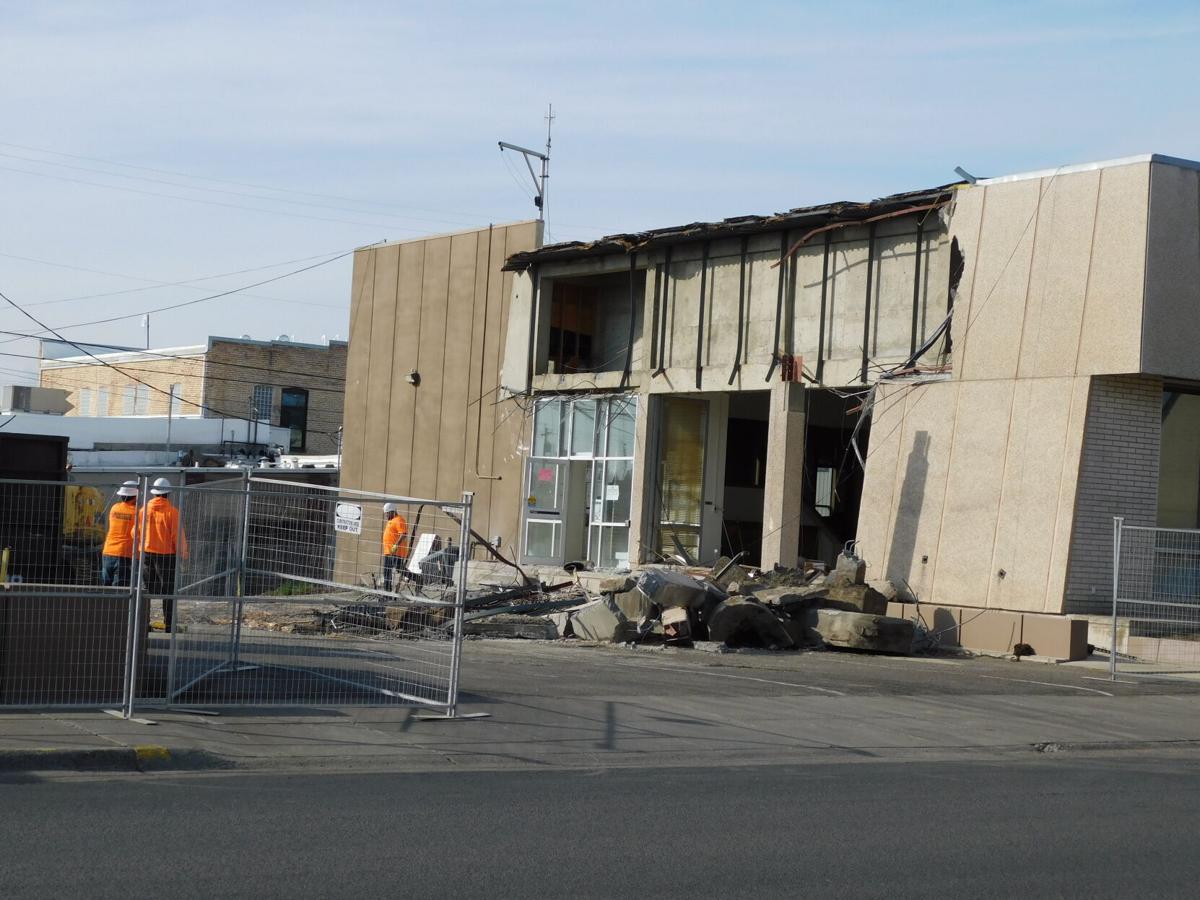 Contractors begin tearing down the former Hermiston City Hall on the morning of Wednesday, March 17, 2021. The building will be replaced with a larger facility in the same location. 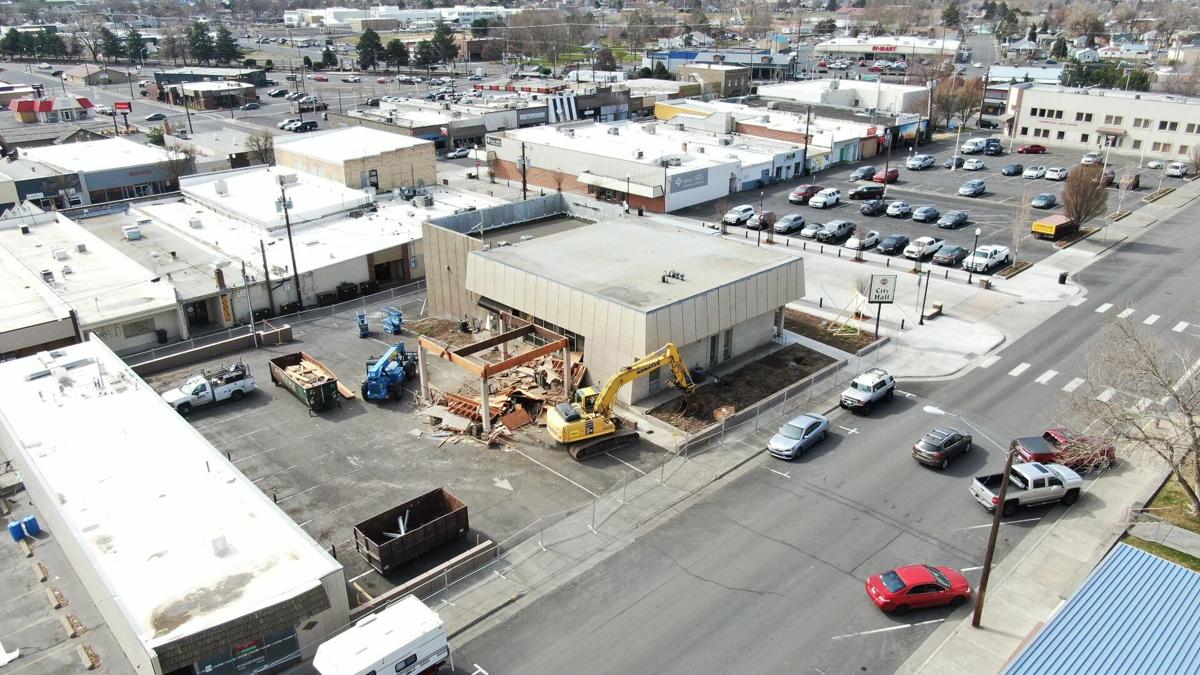 An aerial shot shows the start of the demolition process for Hermiston City Hall on Wednesday, March 17, 2021.

Contractors begin tearing down the former Hermiston City Hall on the morning of Wednesday, March 17, 2021. The building will be replaced with a larger facility in the same location.

An aerial shot shows the start of the demolition process for Hermiston City Hall on Wednesday, March 17, 2021.

Contractors began tearing down Hermiston’s former city hall on Wednesday, March 17, to make way for a new city hall in the same location.

Demolition began briefly on the east side of the building, and then halted and switched to tearing down the Lanham Building next door, which is being removed to make way for additional parking. During the Monday, March 22, city council meeting, City Manager Byron Smith said the contractor located some materials that needed more careful disposal.

“As often happens with an old building like that, as they were getting into city hall they found a few more hazardous materials in there than our original report had shown so we’re already going to get a change order on that to take care of those,” Smith said.

He said the project supervisor has made introductions with all the businesses surrounding the construction site, and the city is hosting a meeting and distributing flyers with the timeline for the project and how it may affect businesses. Smith said the parking lot behind Banner Bank and across from city hall will be closed from March 30 to about June 1 in order to renovate the lot to add additional parking.

The city hall building was originally built as a bank in 1965. According to the Hermiston Herald’s archives, the city purchased the building in June 1986 from Benjamin Franklin Western Heritage Bank for $365,000 before remodeling it and holding a public open house for the new city hall in March 1987. Since then, the city’s population has roughly doubled, and city staff spread to additional buildings when city hall ran out of space.

In December 2019, a fire burned the building’s HVAC system and caused smoke damage throughout the building, according to the city, and city councilors voted to push ahead with building a new city hall sooner than expected rather than put money into repairing the old building.

The new city hall, planned for the current space where the old building is being demolished, will be three stories and include not only space for city staff, but the new home of the municipal court and office space for some Umatilla County departments.

Until construction is complete, most city staff are in the old Carnegie Library or basement of the Hermiston Public Library. More information, and a live video feed of the construction process, can be found at hermistonprojects.com/cityhall.