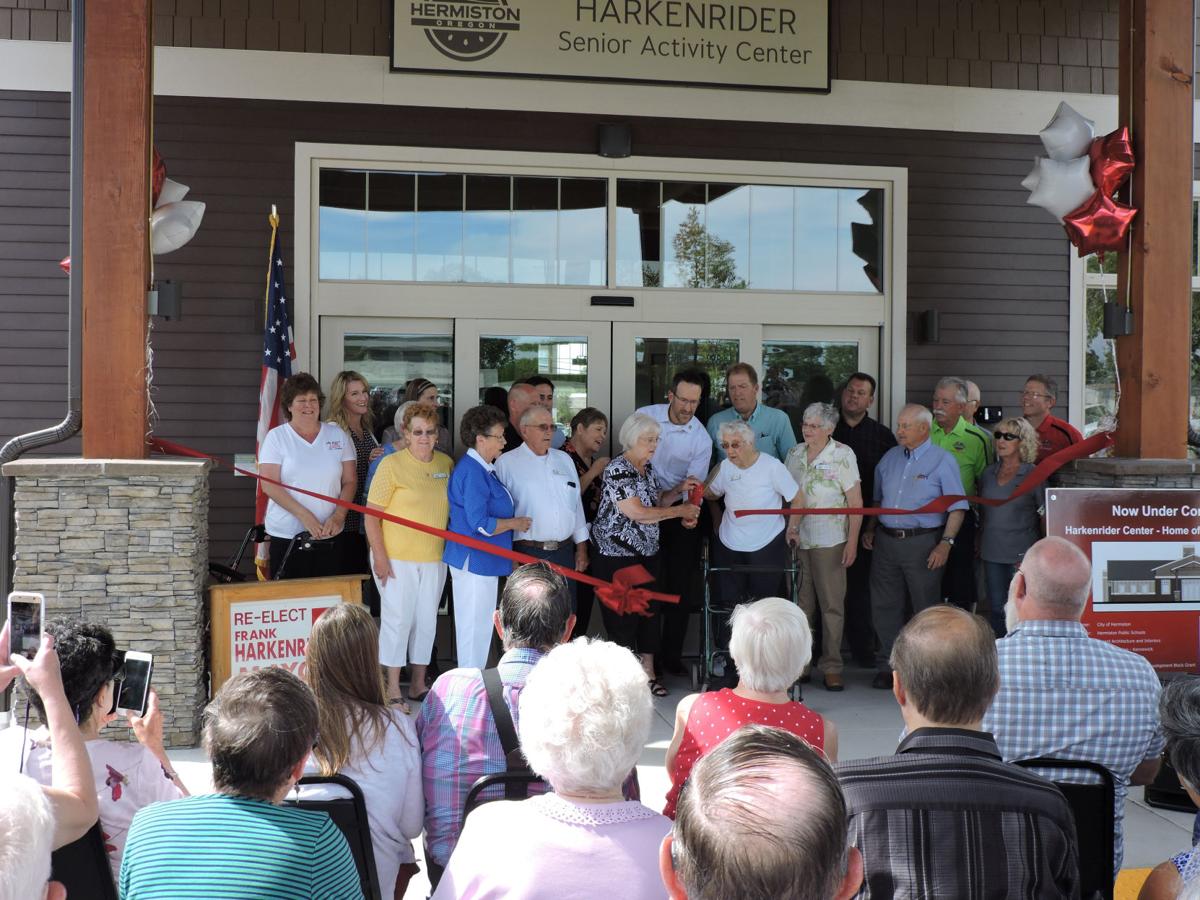 A few people involved in the project cut the ribbon at the Harkenrider Senior Activity Center. 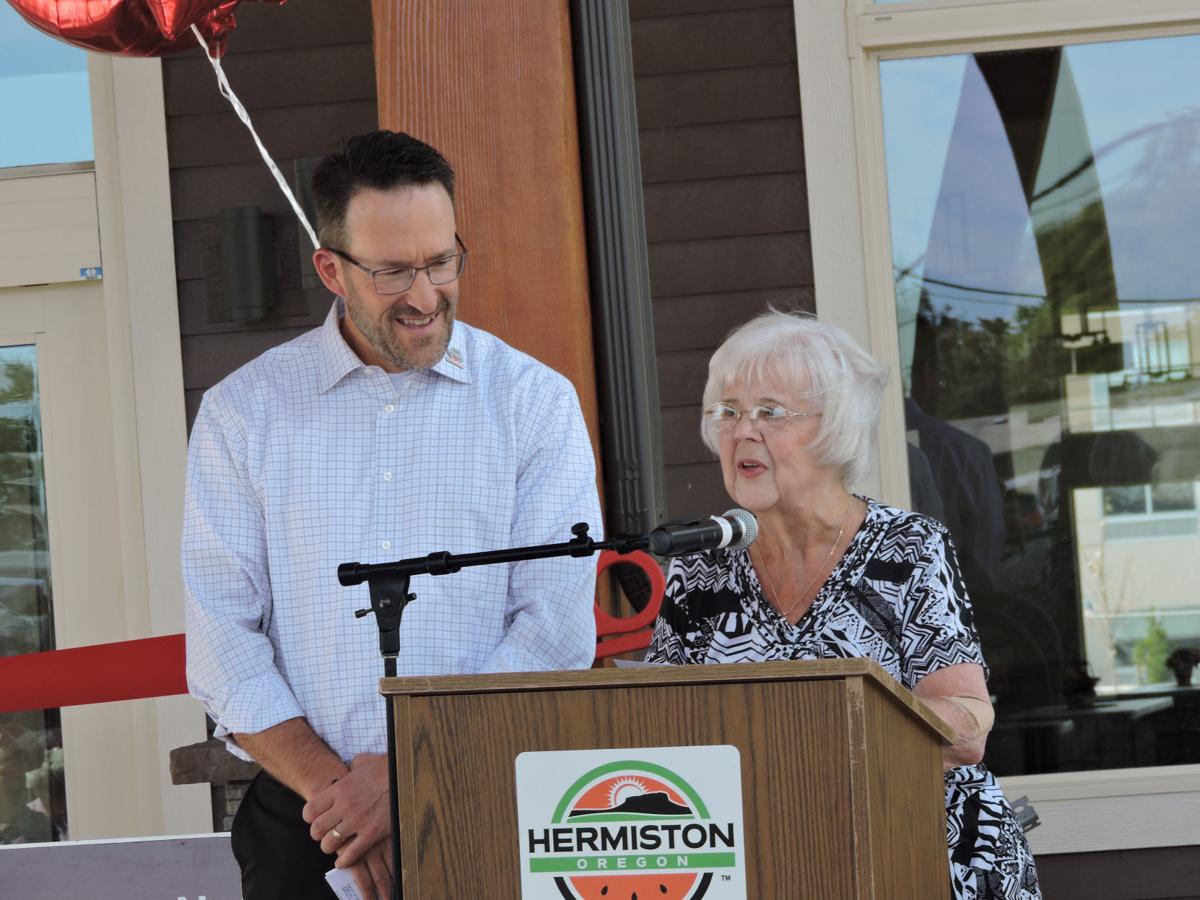 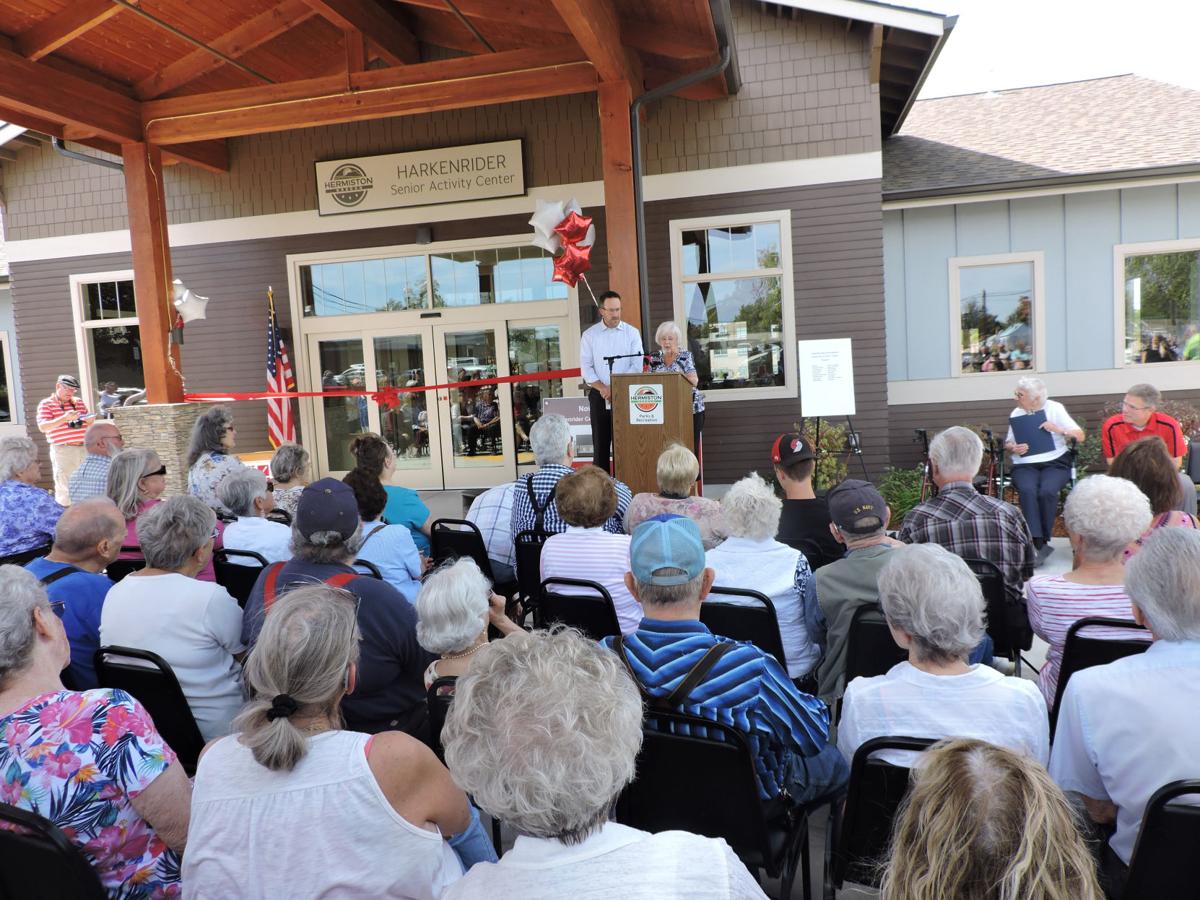 Beverly Harkenrider speaks at the dedication ceremony for the Harkenrider Senior Activity Center. 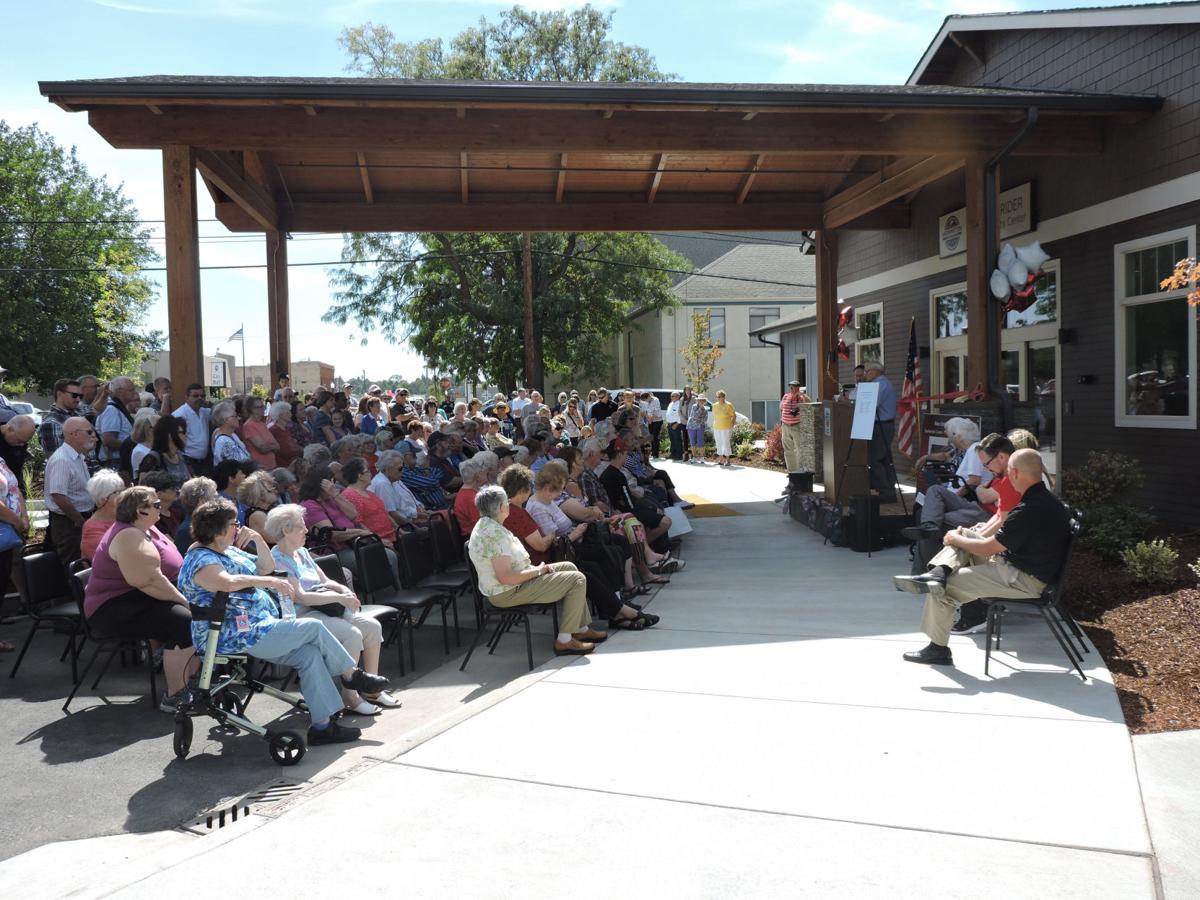 Dennis Doherty speaks at the dedication ceremony for the Harkenrider Senior Activity Center. 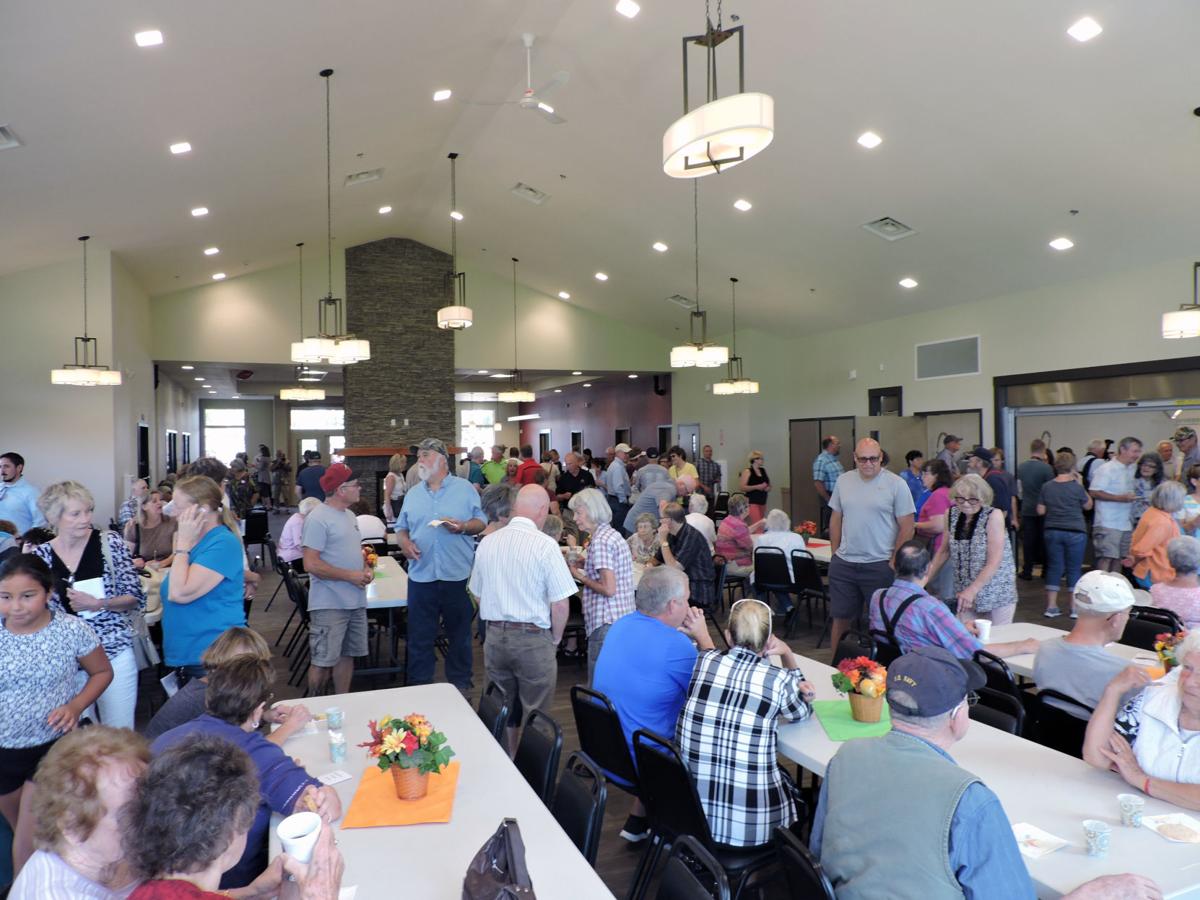 A few people involved in the project cut the ribbon at the Harkenrider Senior Activity Center.

Beverly Harkenrider speaks at the dedication ceremony for the Harkenrider Senior Activity Center.

Dennis Doherty speaks at the dedication ceremony for the Harkenrider Senior Activity Center.

The sun was shining and the mood was festive as about 200 people gathered Saturday to celebrate the opening of the Harkenrider Senior Activity Center.

“This is what Eastern Oregon life is all about,” Mayor David Drotzmann said.

Behind him was the new 7,000-square-foot senior center built on Ridgeway Avenue downtown. Its features include a large gathering area, breakout rooms, offices, gas fireplace, deck, unfinished basement and a commercial kitchen stocked with $100,000 of equipment.

The center was named after Frank Harkenrider, who served as city councilor or mayor of Hermiston for a total of 50 years. His wife Beverly Harkenrider noted that he was excited to be there to turn over the first shovelful of dirt for the groundbreaking, but did not live to see the building to completion.

“He would be thrilled to see everyone here today,” she said.

Both she and Drotzmann noted Harkenrider’s deep love of Hermiston that earned him the nickname of Hermiston’s biggest cheerleader. Drotzmann gave a “Go Bulldogs!” and congratulated the Hermiston High School football team for winning its game against the Richland Bombers the night before.

“He wouldn’t have let me get through a speech without that,” Drotzmann said.

Several speakers at the dedication ceremony discussed the history of the new building, starting five years ago after Umatilla County sold the former fairgrounds (where the old senior center was located) to Hermiston School District. The district agreed to let the seniors lease the property until 2016, but the senior center board began looking for a path forward to a new center. Dennis Doherty, who was a county commissioner at the time, told the audience that it soon became clear that the best chance the seniors had at raising enough funds for a new building would be to apply for a federal Community Development Block Grant. The city agreed to be the governmental sponsor for that, and parks and recreation director Larry Fetter took point on the project.

Fetter said the grant came with a huge amount of strings attached, and dealing with the bureaucracy of that had been his biggest focus the last few years, along with working with multiple groups involved in the project who had strong and often differing opinions.

“In the end it was worth it, because our seniors are worth fighting for,” he said.

He told the audience that the Harkenrider Center would be the seniors’ home “forever,” not just the five years required by the grant money. Doherty called it the premier senior center of Oregon.

Senior center board president Irene Miller thanked the many people involved in making the project happen, and encouraged all seniors in the community to participate in the meals and other activities that will be offered there.

“It’s our dream that every senior will want to be a part of what’s going on here,” she said. “We need new hands, new ideas and new bodies — lots of new bodies.”