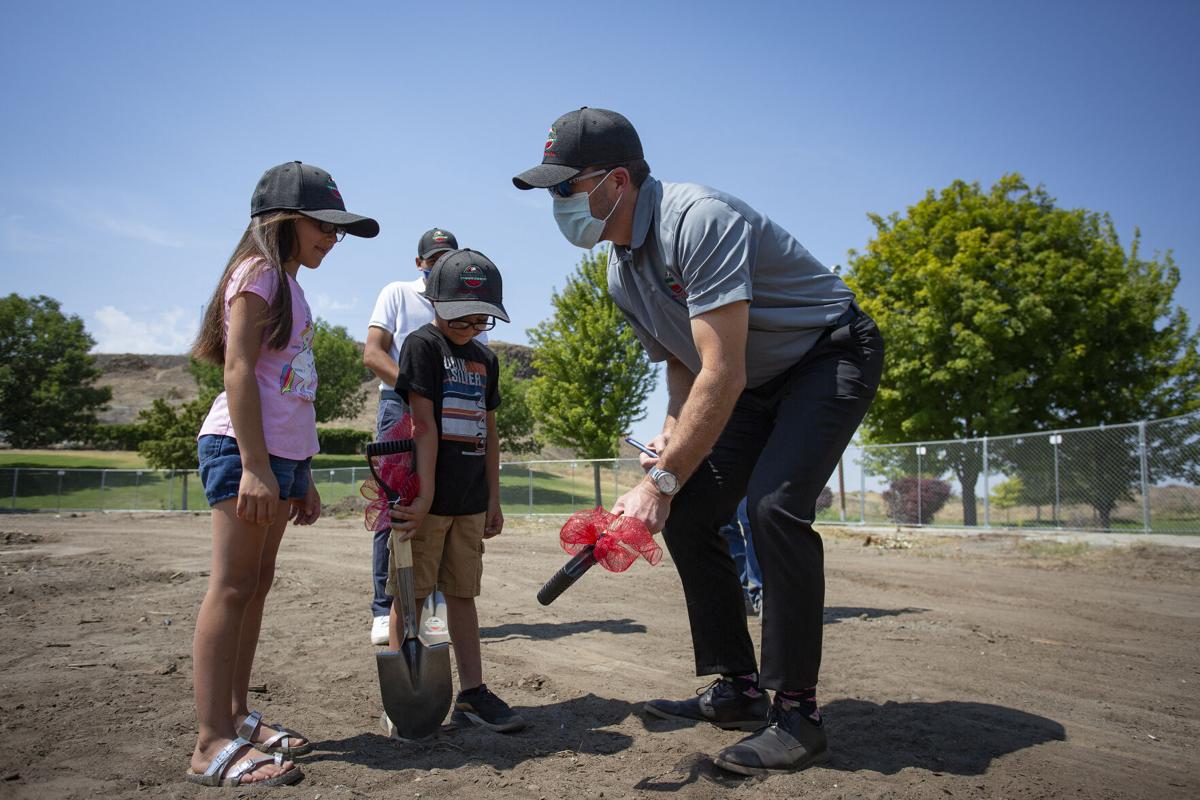 Hermiston Mayor David Drotzmann signs a shovel for Jadalynn Martinez as her brother Jaysen Martinez looks on at the groundbreaking for the new Funland Playground in Hermiston on Wednesday, July 29, 2020. 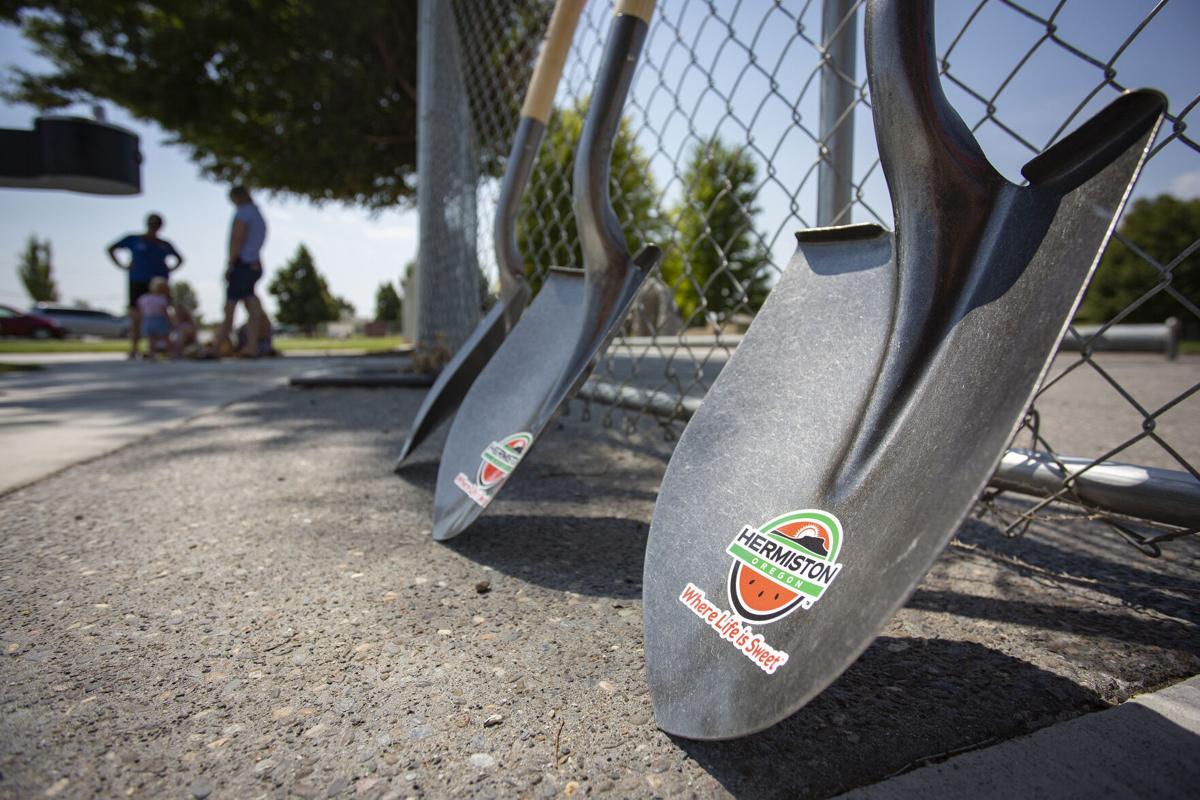 Shovels sit awaiting use at the groundbreaking ceremony for the new Funland Playground in Hermiston on Wednesday, July 29, 2020. 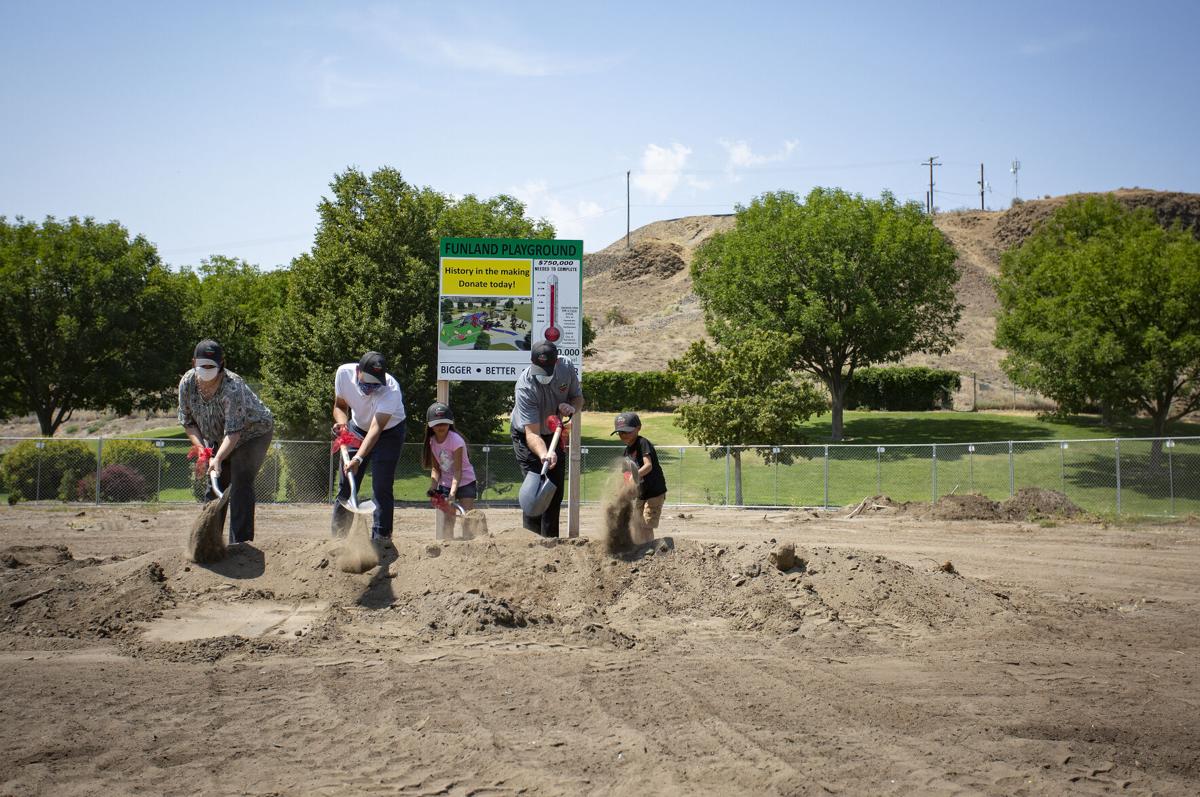 Hermiston Mayor David Drotzmann signs a shovel for Jadalynn Martinez as her brother Jaysen Martinez looks on at the groundbreaking for the new Funland Playground in Hermiston on Wednesday, July 29, 2020.

Shovels sit awaiting use at the groundbreaking ceremony for the new Funland Playground in Hermiston on Wednesday, July 29, 2020.

A small group of Hermiston residents celebrated some good news on Wednesday, July 29, by breaking ground on the new Funland Playground at Butte Park.

The previous iteration of Funland — a large, castle-like wooden structure — burned down in May 2019 in a suspected case of arson. In the year since, a committee of city officials, parents and other residents has worked to design a new and improved playground that they hope will be just as fun but more secure, durable and accessible.

“I’m excited,” said City Councilor Roy Barron, who was one of six people to turn over a shovelful of dirt on the future home of the playground. “It’s nice to have something positive to look forward to for the community.”

Barron said he was happy to see that not only was the new design more accessible to children of all abilities, but the committee also worked hard to represent many aspects of the community. Parts of the design pay homage to Hermiston’s history, its many cultures and its agricultural background through features, such as a tall slide leading from a replica of a farm silo.

In December 2019, the city council approved the committee to work toward a goal of fundraising as much as $810,000 for the project, in addition to the $752,000 insurance payout.

Larry Fetter, director of Hermiston’s parks and recreation department, said they were able to raise enough to check off the main items on their wish list. That includes an additional picnic shelter that is being donated by the Rotary Club, a building for concessions and restrooms, and a rubberized “poured-in-place” surface.

Fetter said the colorful poured-in-place surface underneath the playground has a 20-year lifespan. It is porous enough for water to drain through instead of pooling up, accessible to devices, such as wheelchairs and walkers, and easier to maintain than loose materials that need to constantly be replenished.

“It’s firm, but resilient,” he said. “If you land on it, it’s like a marshmallow, but it doesn’t get displaced like wood chips.”

The concessions building will provide restrooms for both the playground and the splash park, and offer an opportunity for groups or businesses to sell concessions while keeping an eye on both parts of the park.

“We will have very high-definition cameras recording live, so there will be real-time monitoring,” he said.

Fetter said the city is still accepting donations for the project, which will go toward enhancements, such as additional benches and shade. He said the hope is to open the playground in October, but if the weather or supply chain for the playground pieces don’t cooperate with the construction schedule, it may need to be finished in the spring.

Charlie Clupny, who helped build both the 1996 version of Funland, and the 2001 version that was built after the first burned down, said he was thrilled to see the iconic playground return again in a new form.

“It will certainly be a different kind of rebuild, but when it’s done it will be a spectacular monument to the community,” he said.