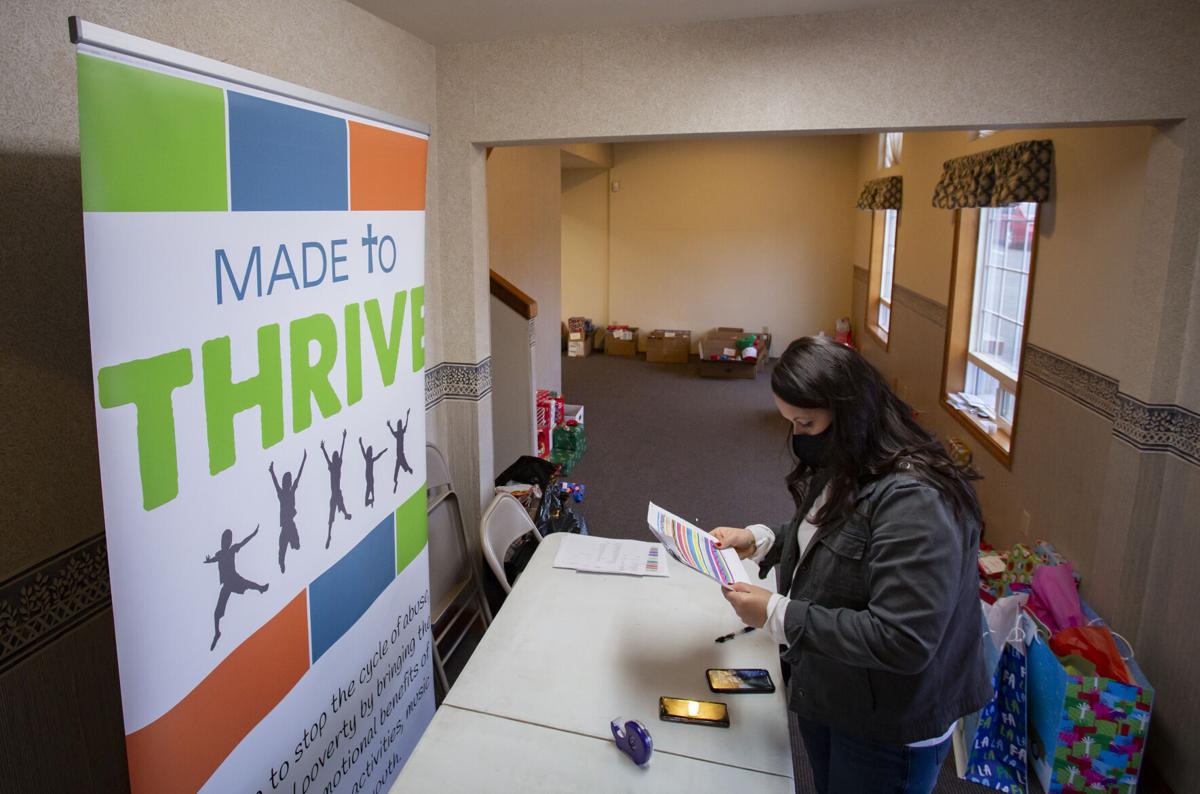 Kris Dammeyer references a list of recipients while organizing Christmas gift pickup and deliveries for Made to Thrive in Hermiston on Friday, Dec. 18, 2020. 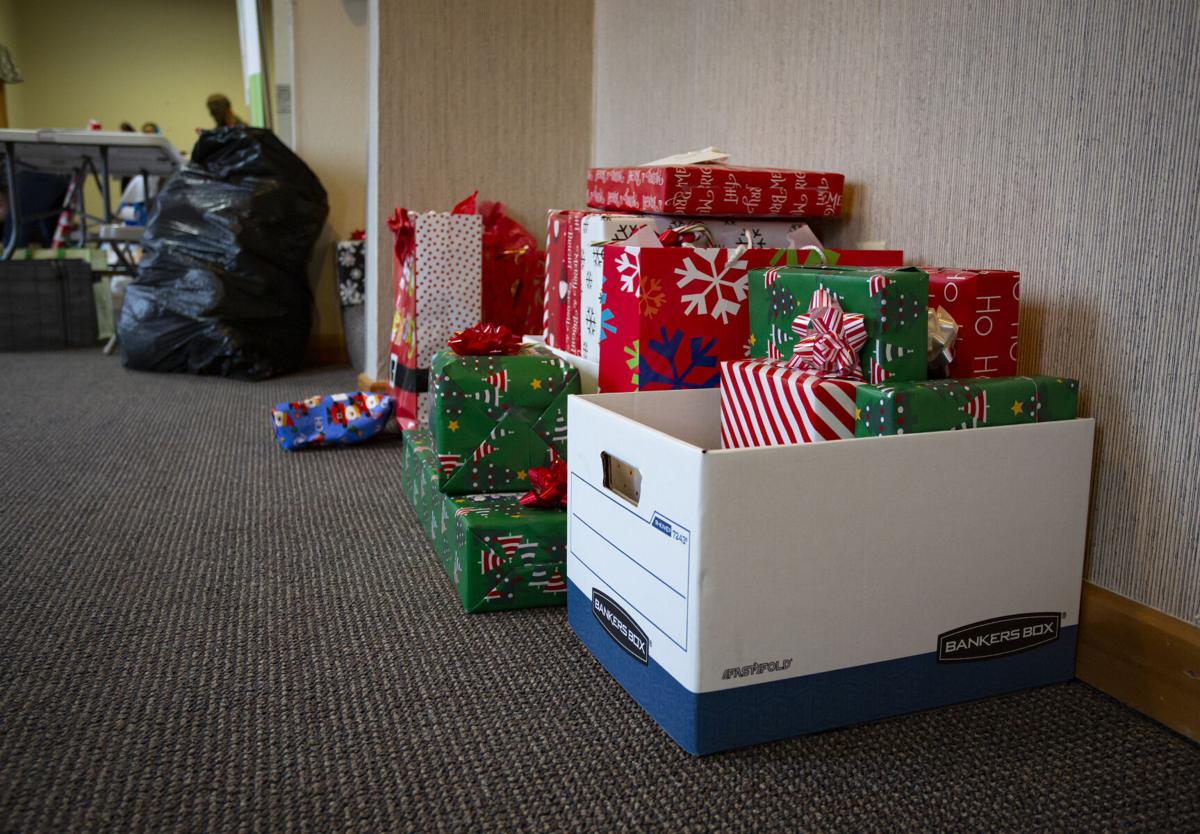 Christmas presents sit wrapped awaiting pickup for participants at Made to Thrive’s staging area in Hermiston on Friday, Dec. 18, 2020. 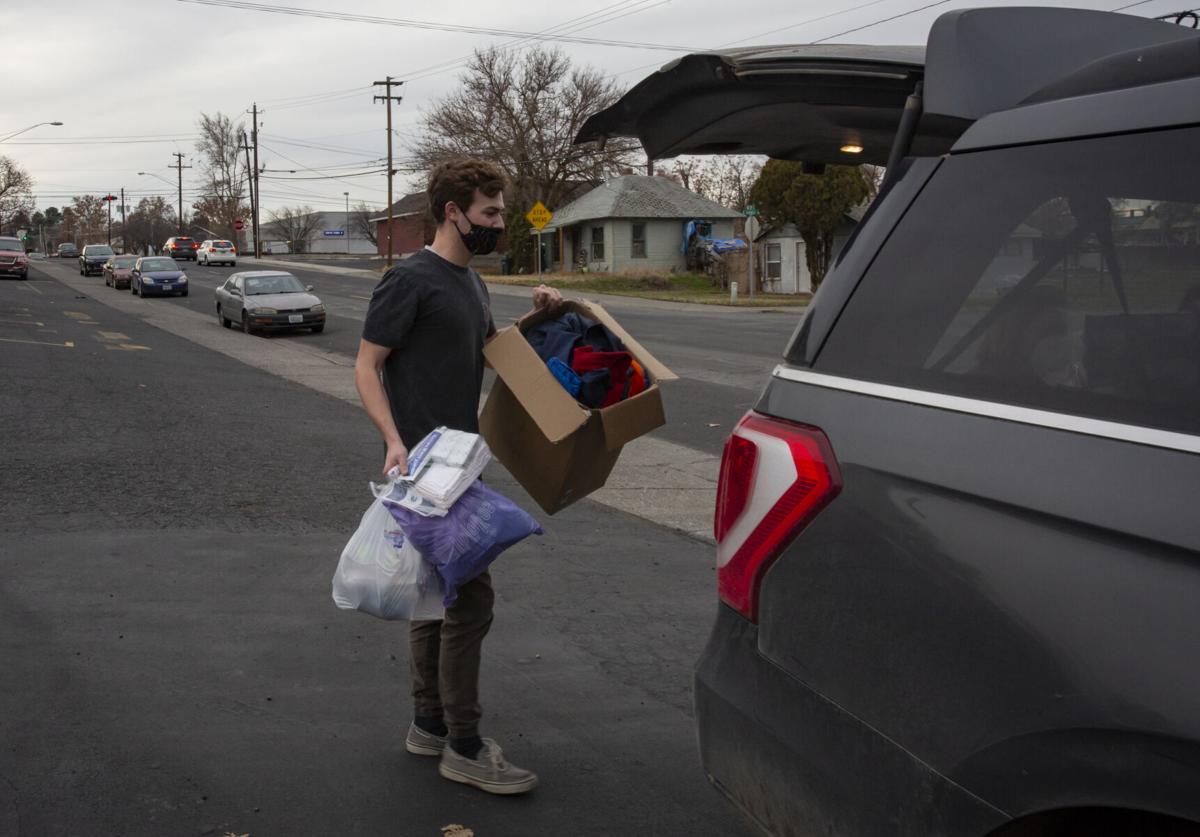 Dylan Westfall helps load donated clothing into a vehicle ahead of a round of deliveries of Christmas gifts by Made to Thrive in Hermiston on Friday, Dec. 18, 2020. 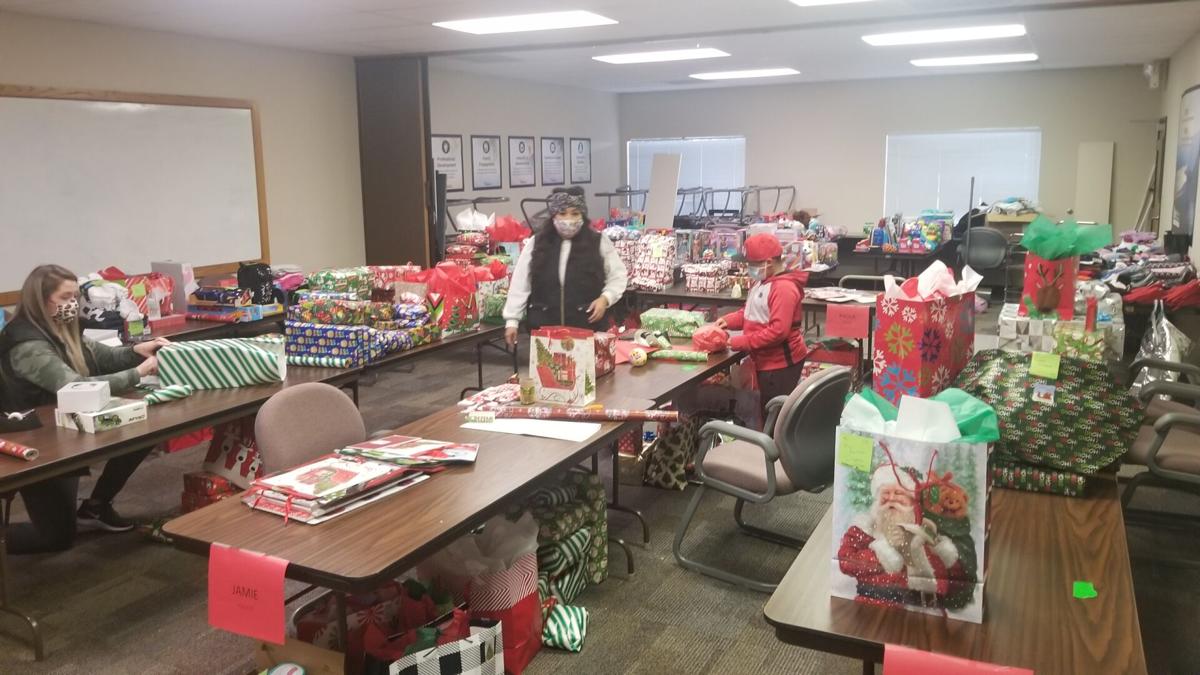 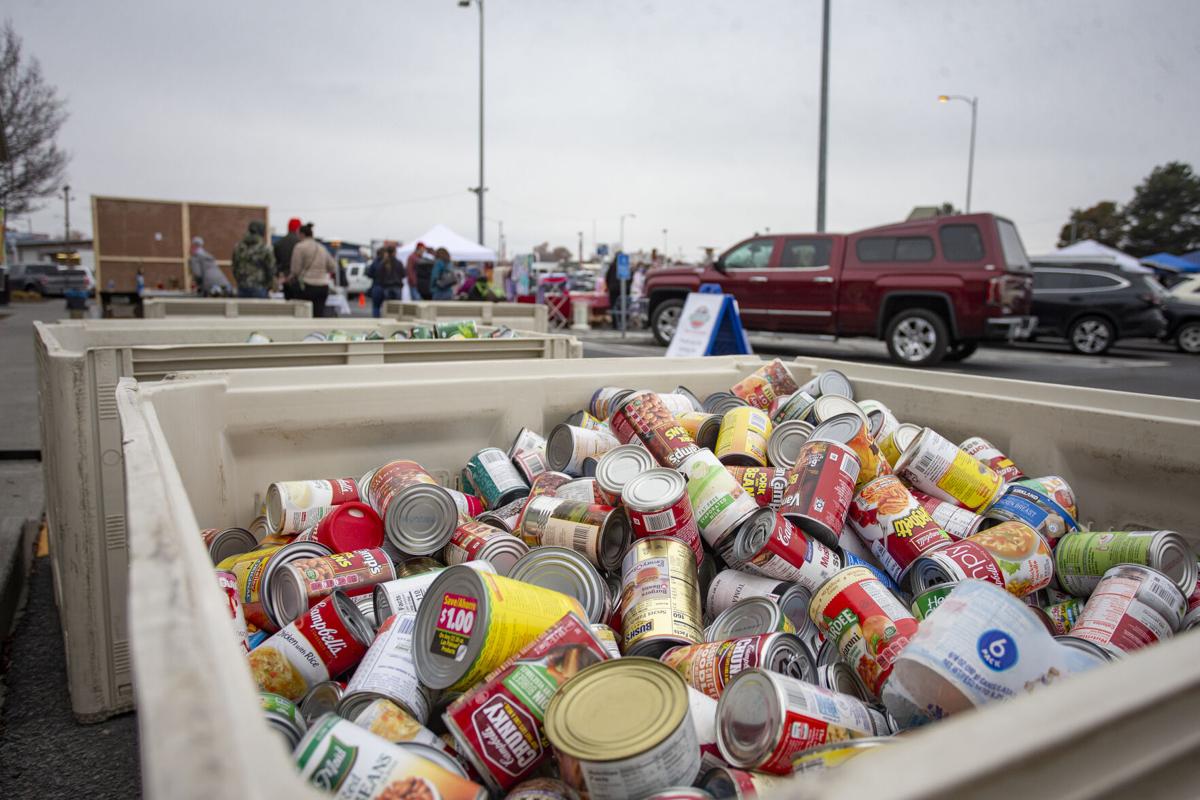 Cans of food fill donation bins outside of the Hermiston Community Center on Saturday, Dec. 5, 2020.

Kris Dammeyer references a list of recipients while organizing Christmas gift pickup and deliveries for Made to Thrive in Hermiston on Friday, Dec. 18, 2020.

Christmas presents sit wrapped awaiting pickup for participants at Made to Thrive’s staging area in Hermiston on Friday, Dec. 18, 2020.

Dylan Westfall helps load donated clothing into a vehicle ahead of a round of deliveries of Christmas gifts by Made to Thrive in Hermiston on Friday, Dec. 18, 2020.

Cans of food fill donation bins outside of the Hermiston Community Center on Saturday, Dec. 5, 2020.

Hermiston and surrounding communities have seen an outpouring of generosity over the holiday season, but the needs that have spurred those gifts won’t go away in January.

The Department of Human services collected 60 Christmas presents for the foster children in Umatilla and Morrow counties, who are spending the holidays away from family.

“This community is awesome,” he said.

The pandemic made things a little more difficult, adding extra steps, such as wiping down each gift with a sanitizing wipe before wrapping it, and then wiping down the wrapping paper before all the gifts were delivered. But Hamilton said they were still able to make it work.

As for what people can do to continue to support foster children after the holidays, he said the biggest need is for foster parents and people willing to provide respite care for those parents. The department can find people to donate toys or other items for children in foster care, he said, but it is always hard to find people willing to take on that responsibility. It has been particularly difficult during the pandemic, he said, as people who have provided care in the past have been concerned about bringing strangers into their home when they fall into a high risk category for complications from COVID-19.

“The one thing we’re looking for the kids right now is homes,” he said.

He said they are particularly in need of more people who speak Spanish or Central American dialects, as not all of the area’s children in the foster system speak English.

He encouraged anyone with questions about becoming a foster parent or providing respite care to call him at 541-564-4484.

At Made to Thrive, the nonprofit helped about 250 students with Christmas gifts, as well as donating blankets, coats, hygiene supplies and other items to their families.

Kris Dammeyer, founder of Made to Thrive, said since Hermiston Police Department’s Christmas Express focuses on children younger than 12, Made to Thrive’s efforts focused on students 12 and up. About 80 shoppers were given the age, sizes and interests of an assigned student or two to shop for this Christmas.

She said volunteers who dropped off gifts to her often apologized for their “small” contribution, but she said those small gifts meant the world to families that picked them up, including many who were receiving such assistance for the first time after the parents were laid off due to the pandemic.

“When families come in and the parents are crying and the kids are crying, we’re giving them hope. And hope is so important right now,” she said.

In a usual year, Made to Thrive helps students from low-income families be able to participate in extra-curricular activities. Volunteers pay participation fees, purchase needed equipment, give rides to practices and show up to games and performances to cheer students on. They also provide mentorship and tutoring, and do what they can to help parents and guardians support their student.

In a year when school has been online and many sports and clubs have not been able to go on as planned, Made to Thrive has continued to tutor and mentor students and has adapted to serving them in other ways, such as providing school supplies to families who can’t afford them.

“We’ve paid for a lot of internet,” Dammeyer said.

She said the organization has started serving about 30 additional families this year due to increased need, and would love to take on more but are concerned about stretching their resources too thin.

Made to Thrive takes both monetary donations, which help pay for supplies for students, and volunteers, who mentor the students. For more information, visit madetothrive.org.

Eastern Oregon Mission runs Agape House, which runs the local food bank and provides other services to residents in need, and Martha’s House, a short-term shelter for homeless families.

Mark Gomolski, the new Agape House director, said on Tuesday, Dec. 22, that the food bank had been busy handing out Christmas gifts and food to the families serviced by Christmas Express, a partnership between Agape House and Hermiston Police Department.

Any leftover food from the program will go to help cover the usual drop-off of donations that nonprofits tend to experience in January and February. Gomolski said if people are looking to support Agape House, the two biggest needs are funds for a new box truck, and donations to the backpack program, which provides a bag of easy-to-make food, such as crackers and peanut butter, each weekend to local students who might not otherwise have enough to eat while not getting school lunches.

He said the backpack program costs nearly $5,000 a month to run, and the nonprofit’s lack of a box truck hinders its ability to pick up large corporate donations, such as pallets of food from farms or the Walmart Distribution Center.

“Those are the two greatest needs we have looking into 2021,” he said. “Also, donations for Martha’s House, which is part of Eastern Oregon Mission.”

Anyone interested in donating can drop off a check, cans and bottles or food at the Agape House, 500 Harper Road, in Hermiston; mail a check to P.O. Box 1723, Hermiston, OR 97838; donate online at agapehousehermiston.org; or designate Eastern Oregon Mission as their nonprofit of choice on Amazon Smile.

Editor's note: This article has been updated to reflect that Jamie Meakins organized DHS's gift-giving for foster children.

For Hermiston-area residents looking to give charitably or volunteer in 2021, here are a few other organizations that could use the help: