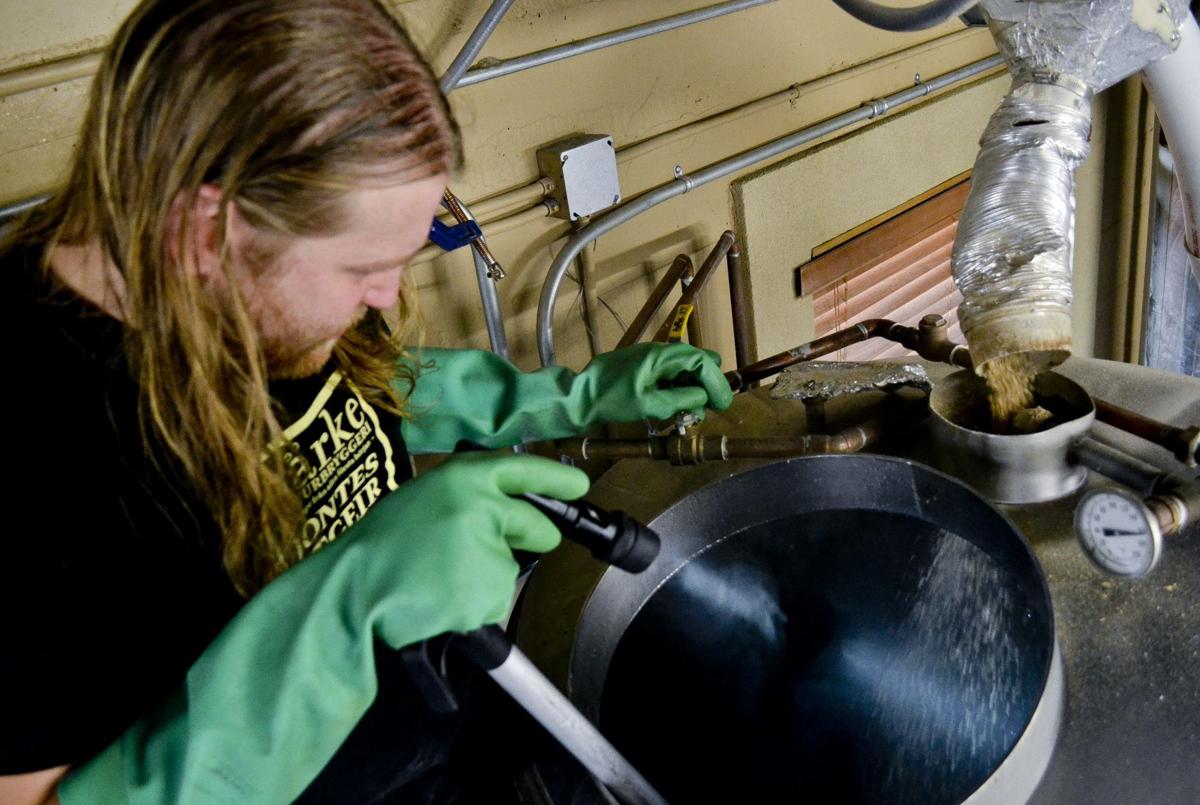 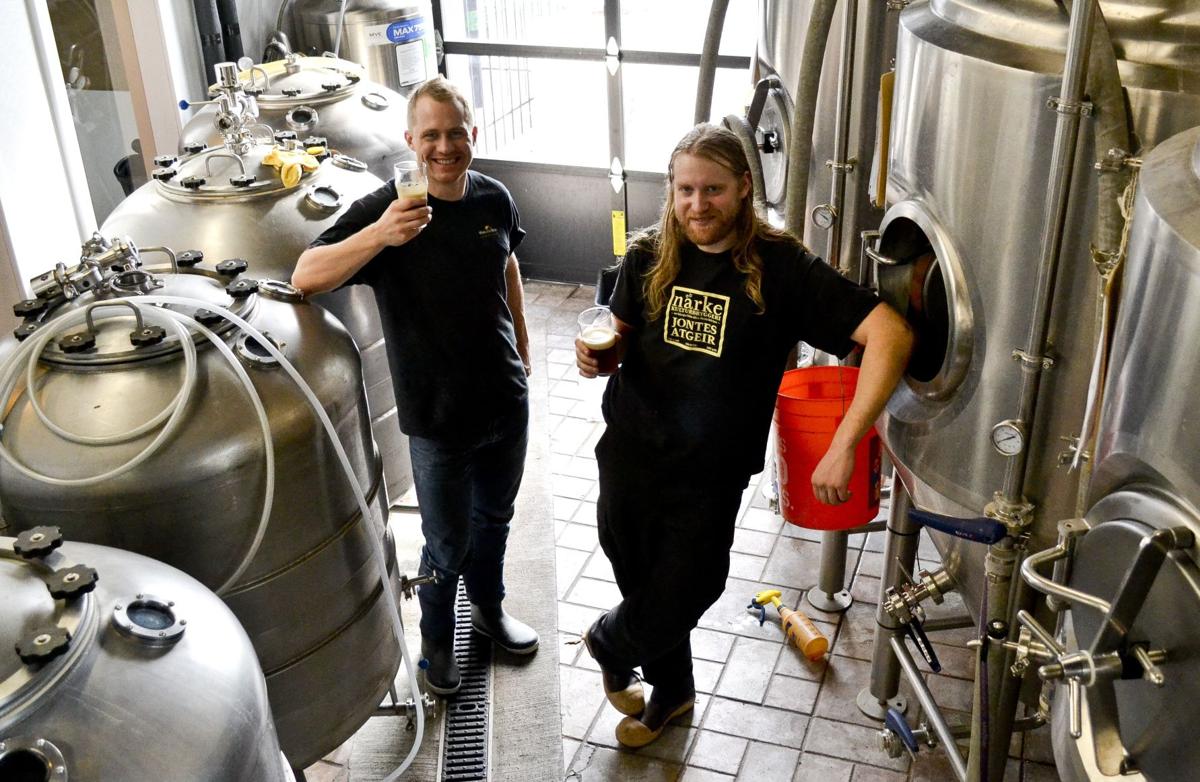 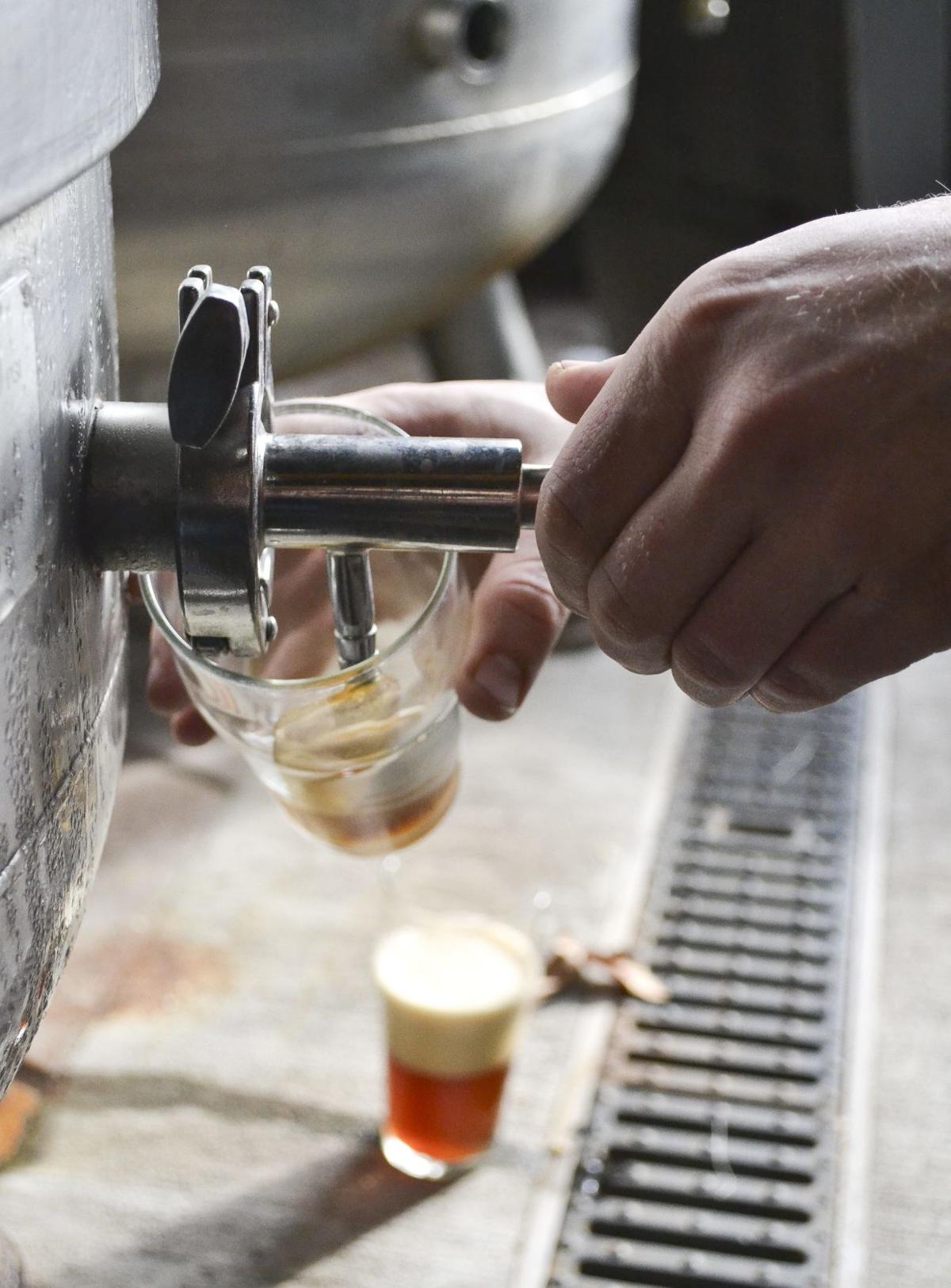 Hermiston Brewing Company brewmaster Tom Torresdal fills up a glass of beer that is nearly ready for public release. 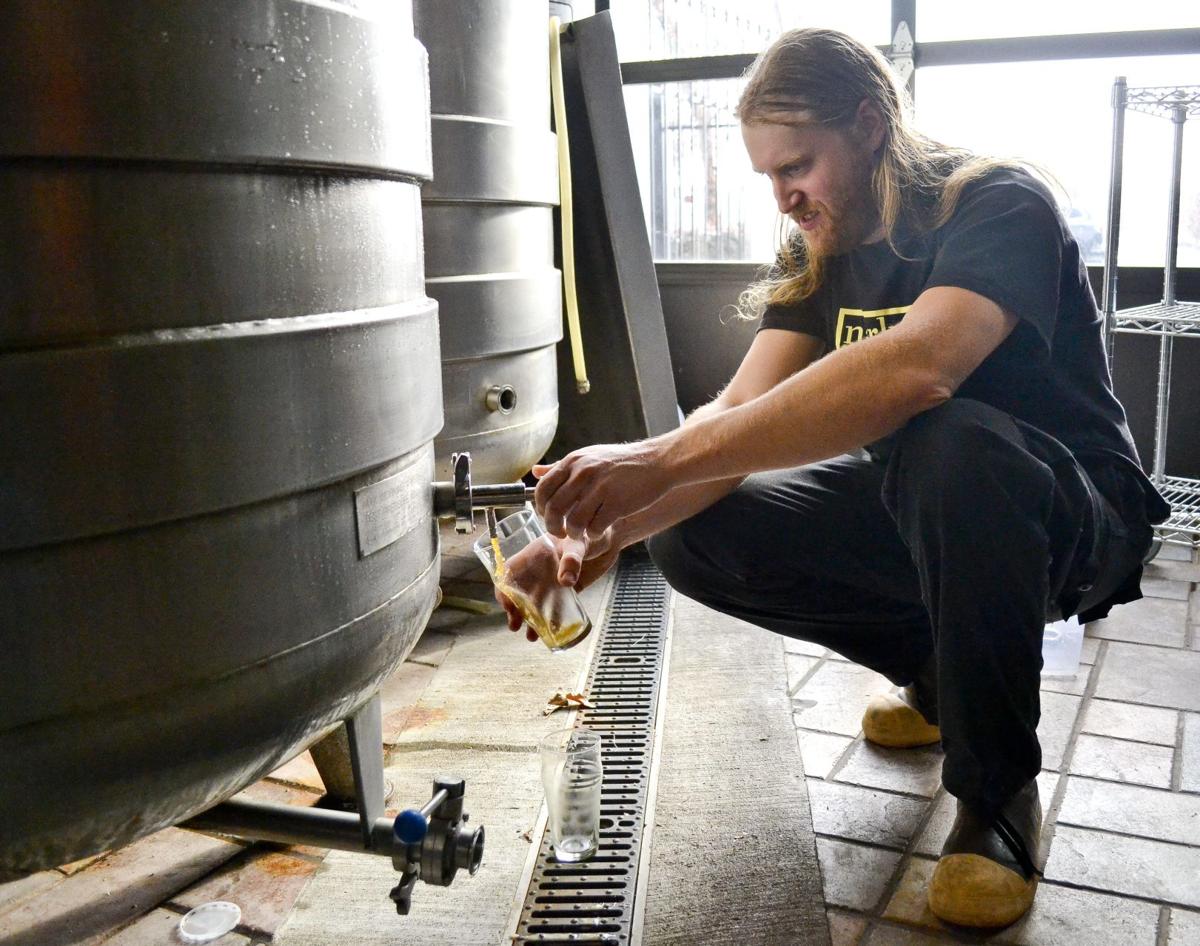 Hermiston Brewing Company brewmaster Tom Torresdal fills up a glass of beer that is nearly ready for public consumption. 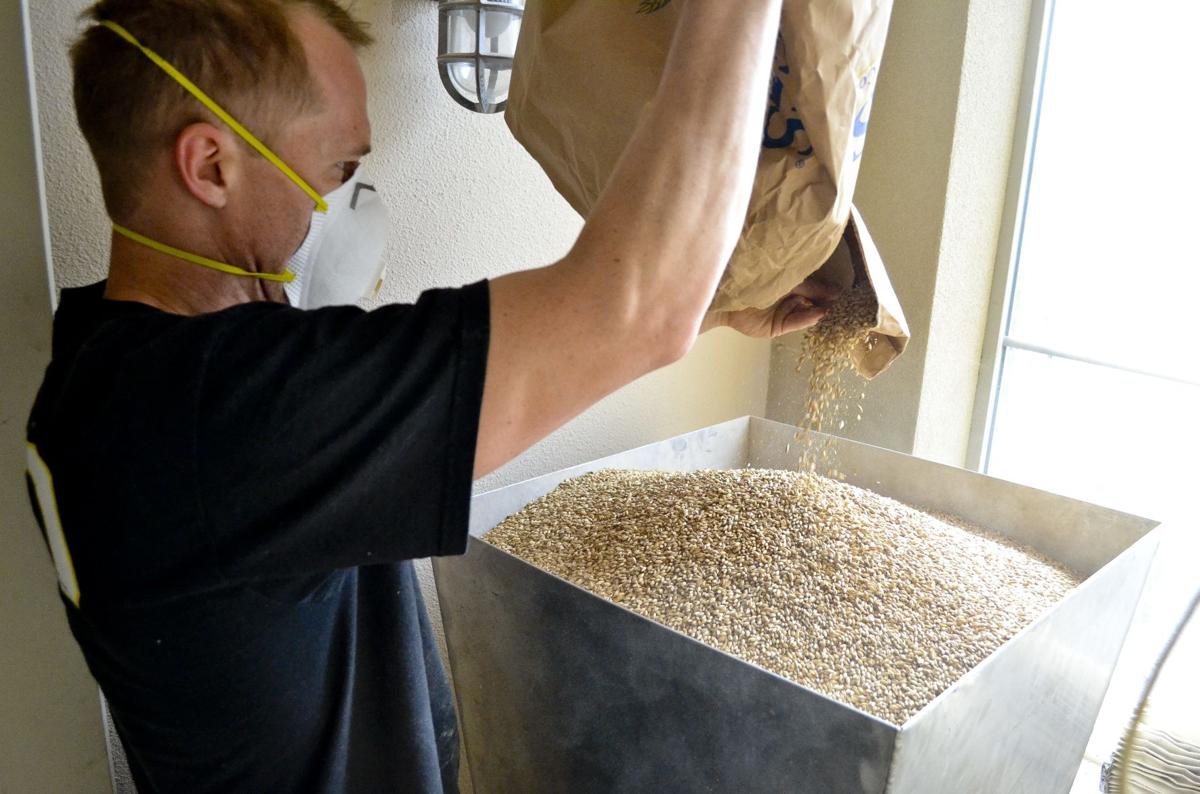 Seattle resident and brewer Einar Mikkelsen pours grains in to a grinder last week at Hermiston Brewing Company. Mikkelsen worked with brewmaster Tom Torresdal to concoct an IPA for the company.

Hermiston Brewing Company brewmaster Tom Torresdal fills up a glass of beer that is nearly ready for public release.

Hermiston Brewing Company brewmaster Tom Torresdal fills up a glass of beer that is nearly ready for public consumption.

Seattle resident and brewer Einar Mikkelsen pours grains in to a grinder last week at Hermiston Brewing Company. Mikkelsen worked with brewmaster Tom Torresdal to concoct an IPA for the company.

Three years ago, Hermiston brewer Tom Torresdal was biding his time, living the bohemian musician lifestyle in Portland. Little did he know, however, his life was about to drastically change.

An opportunity presented itself that not only gave him a chance to travel to his family’s native homeland, Norway, but it ultimately led him to land his dream job brewing beer in that country and then Hermiston.

It all began with a little nagging from his mom.

In 2011, then 26-year-old Torresdal had graduated from the University of Portland with a degree in politics. After graduating, however, he said he had no interest in pursuing a career in the subject.

Instead, he decided to earn a living working in a guitar shop, playing in a band and making a little craft beer on the side in Portland. His parents weren’t exactly impressed with his choices.

Torresdal’s mother, a doctor by trade, called him one day to tell him exactly what she thought of his lifestyle, telling him that it was time to get a real job, preferably one with health insurance.

Torresdal said he started looking on Craigslist to set his mom’s mind at ease. While browsing the film and TV section, a particular post, advertising for contestants to compete on a Norwegian reality show, caught his eye. Torresdal decided to audition and was one of 12 Americans with Norwegian ancestry cast to compete for the show, “Alt for Norge,” which translates to “All For Norway” in English.

Immediately after reading the post, Torresdal said he knew he had to apply because, after all, if his resemblance to the Norse god Thor didn’t get him a spot on the show, he thought he would be chosen because of his personality and love for all things Norwegian, including drinking the best craft beers being made — a field that is exploding in popularity in the Scandinavian country.

“I knew 100 percent that I was getting on this show,” he said. “I sent in an audition tape where I played a rendition of Johnny B. Goode.”

The next thing he knew, he was flying to Norway to compete for $50,000 and a chance to meet distant Norwegian family members.

Torresdal said he and his 11 other fellow contestants arrived in a new city each day and competed in things like cross-country skiing, reindeer lassoing and even a cursing competition, after being taught how to properly swear by a native Norwegian.

Torresdal said his most memorable stunt, however, had to be running a lap around a lake in the city of Bergen in only his underwear. The underwear stunt, he said, he will remember forever.

“We all ran nearly naked around a lake in the second largest city in Norway,” he said, laughing. “I don’t think it gets crazier than that.”

After the contestants were eliminated to the final three, with Torresdal still in the running, they then had to sing the Norwegian national anthem after taking only an hour to learn it. Each performed the song accompanied by a full orchestra in a packed theater house in Oslo.

Torresdal said it wasn’t his best event because he can’t sing very well, despite his guitar-playing skills. He ultimately placed third in the reality competition, though it wasn’t the last the country would see of him.

After returning home for a bit, and again in search of a career, Torresdal realized he wanted to break into the Norwegian beer-brewing scene.

Torresdal said he emailed every brewer he could find in the country. As he was sending out messages, the last episode of Alt for Norge aired on TV, and he was approached by a craft brewer about a job opportunity. At a moment’s notice, he packed his bags and shipped off to Rena, a small town about two and a half hours north of Oslo, where he worked at a brewing house at a farm for brewmaster Per Walmsnaess.

Torresdal said Walmsnaess started him mainly in housekeeping and maintenance on the farm — mending old barns and fences and cleaning kegs.

He said Walmsnaess eventually gave him the keys to the brewery and let him have at it. That was when the real learning began, Torresdal said.

“I learned a lot about brewing and also got to do lots of crazy stuff,” he said. “At first, all I was brewing was pilsner. At the brewery I was at, they actually won a big national beer competition for having the best pilsner ... I also got to brew all other different styles.”

The opportunity was short-lived, however. Following some work visa issues, Torresdal returned home to Oregon in search of a job at a local Oregon brewing company.

After returning, Torresdal posted his resume on probrewer.com, which is where Hermiston Brewing Company owner Mitch Myers discovered him.

Myers said he saw something in Torresdal that he liked and, about two months ago, invited him to be the head brewmaster at Hermiston Brewing Company, which is connected to Nookies Restaurant and Sports Bar. The rest is history, he said.

“Tom just has this personality that is contagious, and it shows in the beers he makes,” he said.

Since he has been there, Torresdal has brewed a couple of original creations, including a Bloodaxe Red — a beer inspired by a Norwegian Christmas beer, and Oy, a coconut and vanilla bean porter. Nookies will also release a new beer featuring Jack Daniels whiskey on the winter solstice on Dec. 21 and what is called a Farm City Pilsner in two weeks.

Torresdal also invited Norwegian friend and fellow brewer Einar Mikkelsen, whom he met at a Norwegian Constitution Day celebration at a bar in Seattle, to visit last week and concoct a new batch with him.

“Tom told me he was going to be driving over to Hermiston to do some brewing, and I had a few days off, so I decided to hop in the car and drive over,” Mikkelsen said. “I love brewing with this guy. It’s always a good time.”

Last week, the two brewed about 240 gallons worth of an IPA, each carefully regulating necessary temperatures at each beer-making stage, which is required to produce an IPA. The duo did everything from grinding the grains used in the original boiling process, to adding the hops, to transporting the liquid into its fermentation tanks.

While creating his latest concoction with his good friend, Torresdal said he can’t believe he is getting paid to do what he loves.

“I was finally able to convince someone to pay me to do my hobby,” he said.

Myers said he couldn’t be happier that he decided to hire Torresdal. He invites members of the public to stop in and chat with Torresdal as he completes his latest creations.

“Hermiston is lucky to have a world-class brewer like Tom,” he said. “People can stop in and say hello. He is very open to the public.”