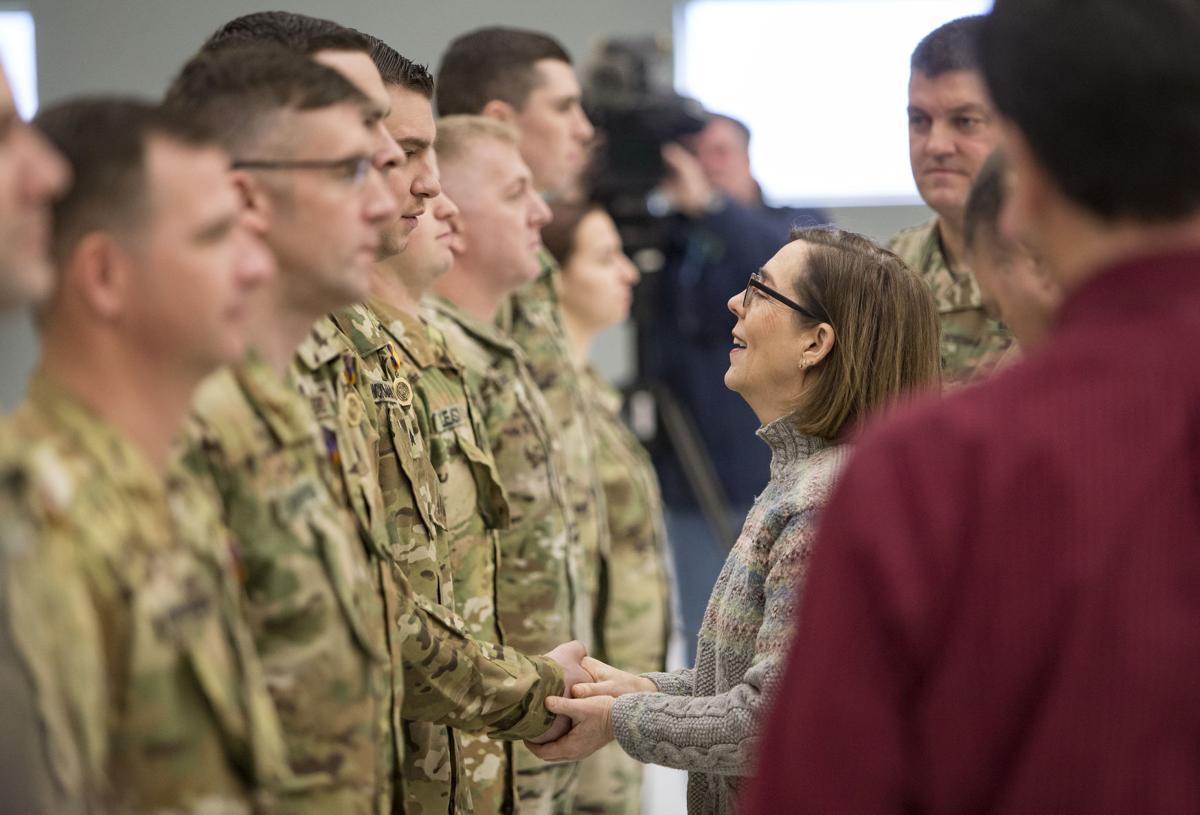 Gov. Kate Brown shakes hands with Sgt. Marcus Hickman of Pendleton’s 1st Battalion, 168th Aviation of the Oregon Army National Guard after presenting him with the Oregon Meritorious Service Medal during a ceremony on Friday morning. 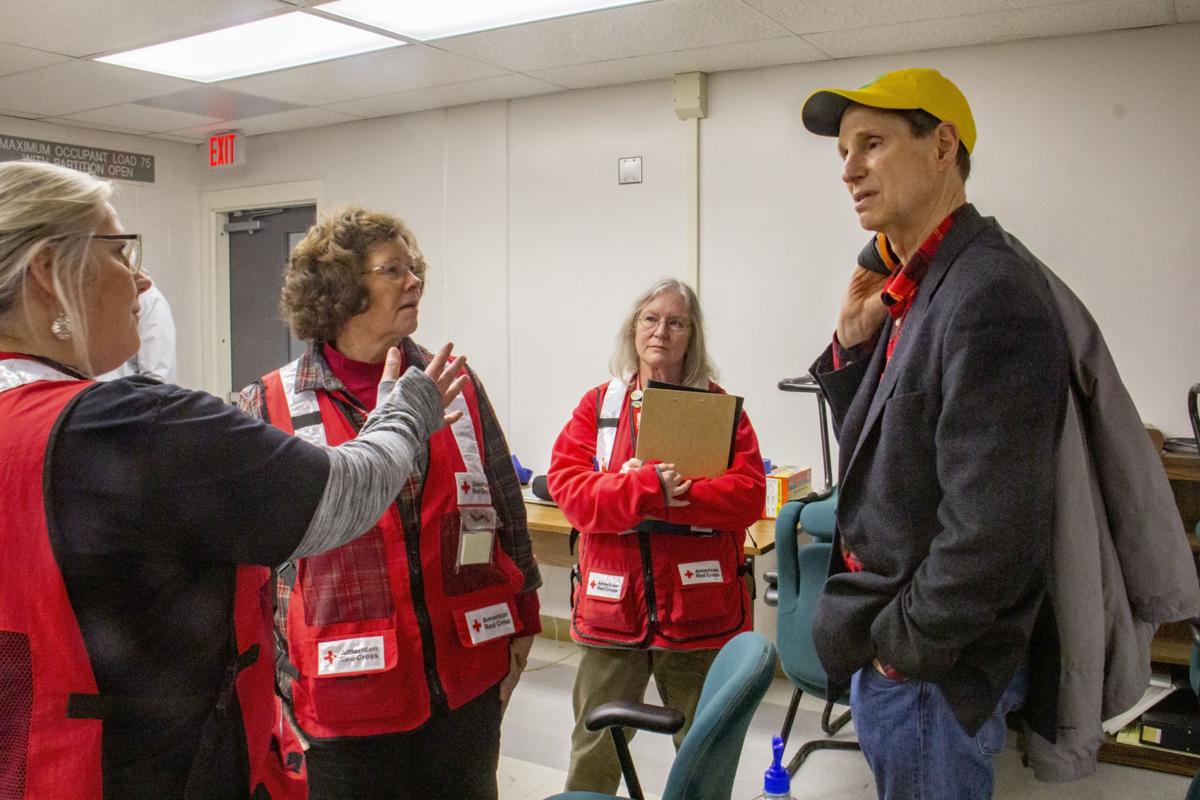 U.S. Sen. Ron Wyden, right, speaks with volunteers from the American Red Cross during a tour on Saturday. The organization had over 100 people sign up to volunteer in wake of severe flooding throughout Umatilla County on Feb. 6.

Gov. Kate Brown shakes hands with Sgt. Marcus Hickman of Pendleton’s 1st Battalion, 168th Aviation of the Oregon Army National Guard after presenting him with the Oregon Meritorious Service Medal during a ceremony on Friday morning.

U.S. Sen. Ron Wyden, right, speaks with volunteers from the American Red Cross during a tour on Saturday. The organization had over 100 people sign up to volunteer in wake of severe flooding throughout Umatilla County on Feb. 6.

National Guard soldiers from Pendleton’s 1st Battalion, 168th Aviation of the Oregon Army National Guard were on a standard training mission when the news first broke of rising floodwaters along the Umatilla River last week.

The crew were told to go recon in an area over the river when they witnessed the disaster that was unfolding on the ground.

“Once you get up there and realize how much devastation and damage there was, you see that it’s pretty significant,” Chief Warrant Officer 3 Ray Talkington said Friday.

After seeing the devastation below, the crew went into rescue mode for the next four days as floodwaters left people stranded throughout Umatilla County. Between Feb. 6-9, three helicopters from the Oregon Army National Guard rescued 54 people, 10 dogs, one cat and one rabbit from floods.

“These Oregon National Guard members took part in the largest search and rescue operation in Oregon’s history,” said Stephen Bomar, director of public affairs with the Oregon Military Department. “They did an amazing job supporting the community and saving lives.”

Gov. Kate Brown landed at the Pendleton National Guard Aviation Facility on Friday morning and promptly presented Talkington, and six others based in Pendleton, the Oregon Meritorious Service Medal. Three others were also presented with Oregon Commendation Medals.

During Brown’s visit Friday, she also toured areas of devastation. Although the waters had long since receded, the evidence was still there when she visited the breached levee by Keystone RV Co. and Cor-Tek.

A truncated stormwater pipe once firmly located underground sat listlessly behind Brown as she delivered remarks to Portland TV news crews. Pendleton city engineer Tim Simons pointed to a scraggle of gnarled trees below the heavily eroded bank and told the governor that was where the levee used to start.

Officially known as the Pendleton Zone 2 levee, the city of Pendleton is seeking $1.8 million from the state to fix the levee, at least until the Federal Emergency Management Agency agrees to reimburse the city’s costs. The Zone 2 levee is comprised of several segments that start west of Interstate 84 and extends all the way to Birch Creek.

After comforting a crying co-manager at Riverview Mobile Home Estates, another area hard hit by the rising river, Brown argued that the damage enacted by the flood went beyond infrastructure.

“We just had a very solid revenue forecast this week,” she said. “I’m confident that we can provide the resources at least temporarily to make sure the levees get rebuilt. I think it’s important that we keep people in the (Oregon) Capitol working on solutions because honestly it’s not just the levees, it’s housing. These folks did not have insurance, probably this whole park. We’ve got to figure out housing for them and I’m hoping the state can step up with a solution.”

U.S. Sen. Ron Wyden and his staff knew from early reports of the floods in Umatilla County earlier this month that it wasn’t a typical one.

While past floods have required quick responses and brought communities together in Eastern Oregon, the scale and impact of the disaster earlier this month was beyond what he’d come to expect.

Over the weekend, Wyden got to see and hear for himself how the floods have affected the area in a visit to Pendleton that featured meetings with local government leaders, relief organizations, volunteers and victims.

“We’re 3,000 miles from D.C., so a lot of times folks feel like D.C. might as well be Mars,” Wyden said. “And I understand that. So it’s my job to kind of shorten the distance and cut through the red tape.”

Wyden started to shorten the distance in the immediate aftermath of the flood when he and his staff reached out to county leaders to offer support and check in.

“Politics aside, I don’t care about right or left, the senator cares,” Umatilla County Commissioner John Shafer said Saturday. “I appreciate that. We all appreciate that.”

Wyden’s visit started Saturday with a comprehensive briefing with leaders and representatives from local governments and organizations at the Umatilla County Emergency Operations Center.

Umatilla County Sheriff Terry Rowan began the briefing with a detailed account of the floods and the immediate response, along with where the situation rests now. When asked by Wyden, Rowan said a rough estimate of people still isolated at their residences due to damage from the flood is about 50.

After Rowan’s presentation, municipal and county leaders rose and spoke specifically about the devastation and financial costs their own communities are facing.

While in town, Wyden also visited the Red Cross shelter in Pendleton, and spent Sunday morning touring Pendleton’s Riverview Mobile Home Estates and speaking with people who had their homes damaged.

“To be able to see this now, you can’t do this job sitting behind your desk in D.C.,” he said after the tour. “You can read reports and hear accounts of damage and all the rest, but to see someone like the gentleman we just saw who lost his house and lost his car. He had nothing. Just nothing.”

Donations have also come to Umatilla County in the aftermath of the flooding.

Wells Fargo & Co. announced a $100,000 donation on Friday to aid in local relief efforts in Eastern Oregon, according to a press release from the organization.

The Wells Fargo Foundation will donate $50,000 to the American Red Cross and $50,000 to Community Action Plan of Eastern Central Oregon for immediate needs such as shelter and meals.

Customers who are experiencing hardship due to the storms can contact Wells Fargo at the number on their credit cards, debit cards or statements to discuss their options. Affected customers can also contact their banker by visiting their nearest Wells Fargo branch.

Other companies, including Pacific Power, have also announced large cash donations, and farms in Washington and Oregon have been collecting and donating hay for livestock displaced by the flooding.