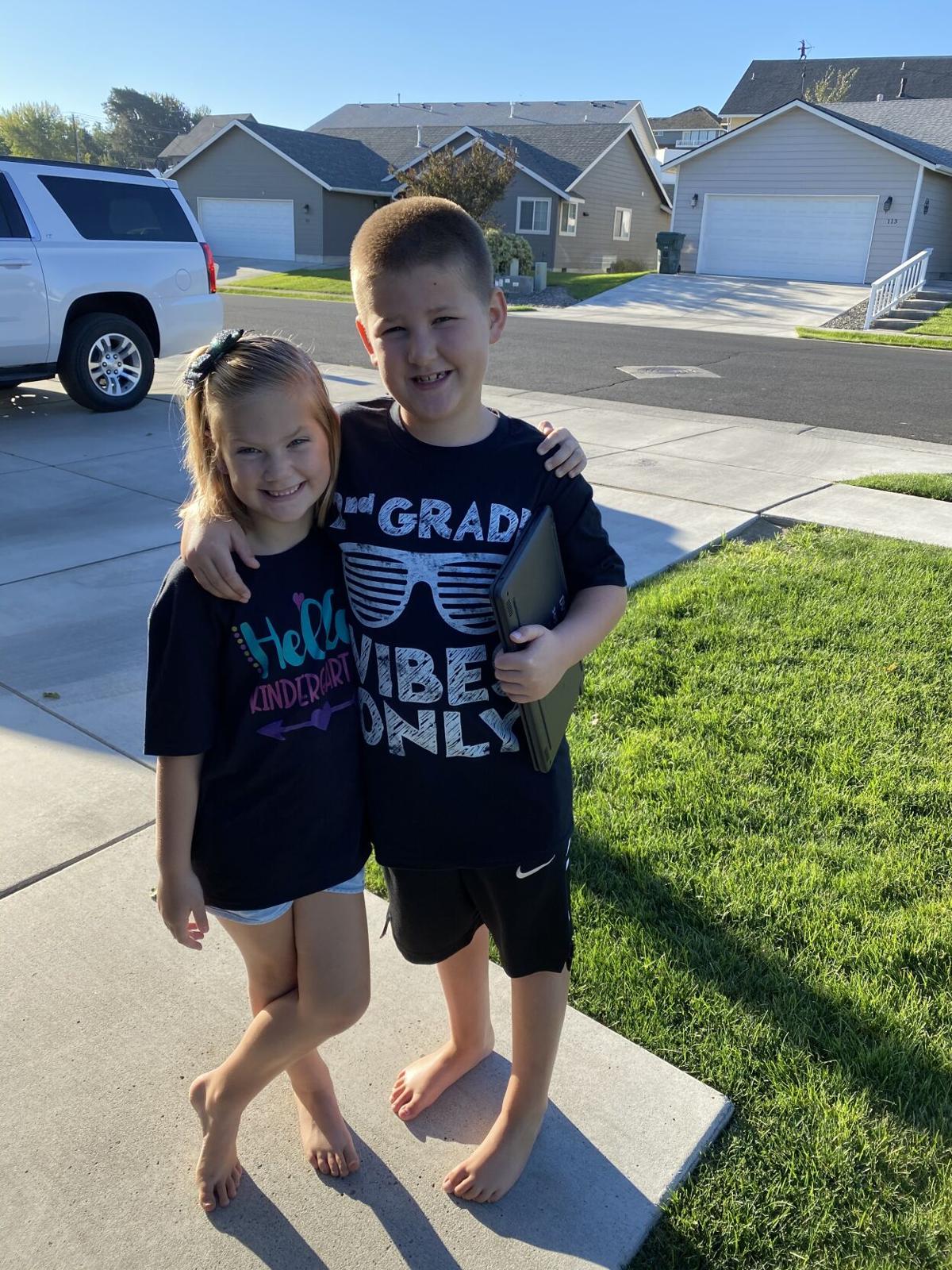 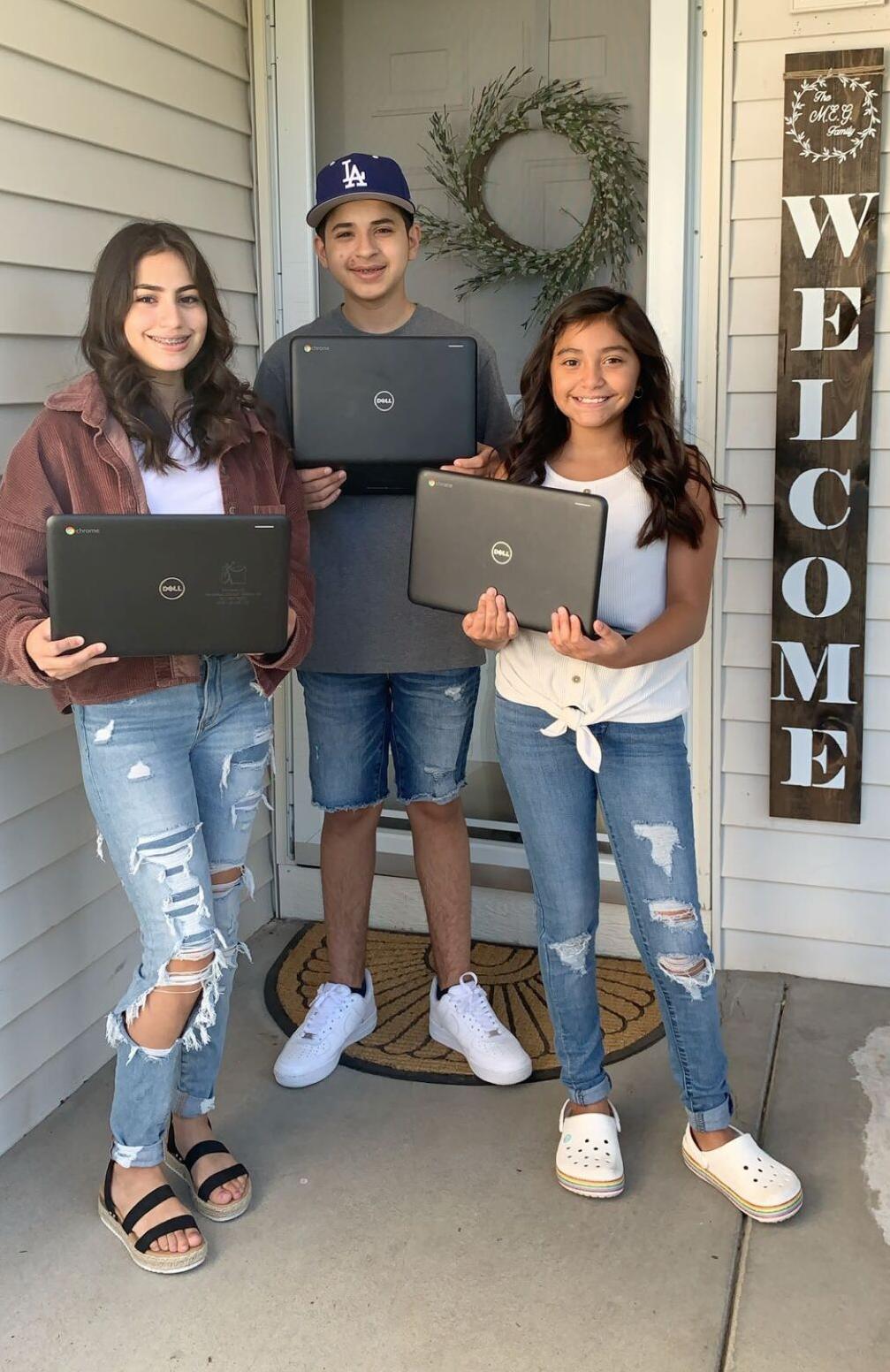 Hermiston School District kicked off the 2020-21 school year on Tuesday, Sept. 8, in a manner that looked much different than the previous year.

The district is required by the state to hold classes completely online until Umatilla County’s COVID-19 cases and test positivity rate decline significantly. So for students around the district, the first day meant logging on to a district-issued Chromebook and meeting their new teachers over video conferencing.

Bryn Browning, assistant superintendent, said she visited classrooms throughout the day at various schools in the district to watch teachers livestream lessons to their students.

“What I saw was teacher excitement, teacher preparation and organization, and a lot of grace between teachers and students,” she said.

She said while she saw encouraging amounts of engagement from students and creativity from teachers, the first day also included a lot of troubleshooting. The district’s internet infrastructure held, she said, but they did see connectivity problems from some households across the district, as well as other issues.

“Sometimes we found a glitch with the Chromebook, so we issued a new Chromebook, or in some cases we had a misspelled name (for logging on),” she said.

Sometimes the issue was students just not being very familiar with using keyboard features, such as caps lock, she said, and in other cases parents didn’t realize that students who had gone to school in the district last year had to reenroll in order to be assigned a teacher and login information for the new school year.

While some parents posted thank yous to their children’s schools on Facebook, saying they thought the day went well, others described tears and technical difficulties.

Kari Kent said the school district was great about helping out with Chromebooks and Wi-Fi hot spots for her family of five children, and she had set up individual work spaces around the house for each student. But when the first day of school finally arrived, her children dealt with the audio on their virtual classrooms cutting out or getting suddenly kicked out of the online classroom while the teacher continued giving instructions they could no longer hear.

“My 11-year-old was in tears because he kept getting booted out ... by the end he was begging me to go back to the classroom,” she said.

She said virtual learning was hard for her youngest, who had trouble sitting still, and particularly difficult for her child with special needs.

“Kids with special needs, one thing they need is a routine and consistency,” she said.

Kent said she had to give up a job she loved and take a different one that runs from 3:30 p.m. to 2 a.m. so that she can be there for her kids while they are doing school every day. She sent a letter to several government officials asking them to please do what they could to bring children back into the physical classroom. In the meantime, however, she offered words of encouragement to parents going through the same struggles.

Browning encouraged any families that are seeing technical problems like being logged off to reach out to their child’s school or to the school district offices. She asked people to stay patient as everyone gets used to the new format and they work out glitches.

Browning helped take calls from worried parents wondering how technical difficulties would affect their child on Monday, but she said the first week of school teachers understood there would be some hiccups and the focus was on getting everyone logged on and comfortable with the system.

As for day care issues, Hermiston School District and the city of Hermiston have partnered with the national day care provider Champions to create a child care facility at the Eastern Oregon Trade and Event Center. The facility was not able to open on the first day of school, however, because it was still waiting on licensing from the state.

Champions has run after-school and before-school child care programs in Hermiston schools in the past, but Hermiston Champions site coordinator Serena Gillson said on Sept. 4 that moving to a new site at EOTEC means getting licensed from the state for that location. The process includes various health and safety inspections that take time to complete.

“Of course they want it to be safe, and I appreciate that,” Gillson said.

The process usually takes about three months, but Gillson said the school district didn’t decide EOTEC would be the location until a little less than a month before the school year started.

The good news, she said, is that everyone from her liaisons with the state to the fire marshal and building inspector locally have been doing what they can to speed up the process.

“Everyone I’ve been working with has been just wonderful,” she said.

Gillson said the way EOTEC is set up, with various meeting rooms and a large ballroom that can be broken up into different pods, it could accommodate more than 100 students, but as of now they are opening up 60 slots since there are still a lot of uncertainties about Umatilla County moving through the phases of reopening.

EOTEC’s internet system is built to supply free Wi-Fi to hundreds of devices during the Umatilla County Fair, so Gillson said they should not have any problems supporting all students’ Chromebooks while helping them with distance learning.

“The vast majority of students are logging in and participating and doing very well,” she said.

The school year hit an early speed bump when a fire on Sept. 7 knocked out internet and power to many Umatilla homes, but Sipe said she had confidence that her staff and the students would be able to handle it. She said she was proud of what she had observed in the classroom during the first week.

“The teachers’ three weeks of training we did was very evident,” she said. “They are really putting forth a great effort to make it a wonderful experience for the kids.”

After the U.S. Department of Agriculture announced it was expanding COVID-19 levels of school meal funding through the end of 2020, Hermiston School District announced that it will be able to continue to serve free meals to all children age 18 or younger in Hermiston.

Previously, the district had planned to return to only serving meals to students enrolled in the district and charging those students for lunch once school started.

Instead, families may pick up meals at all school sites, on the following schedule:

Meals will also be delivered to bus routes around town. For a schedule of routes and times, see hermiston.k12.or.us.