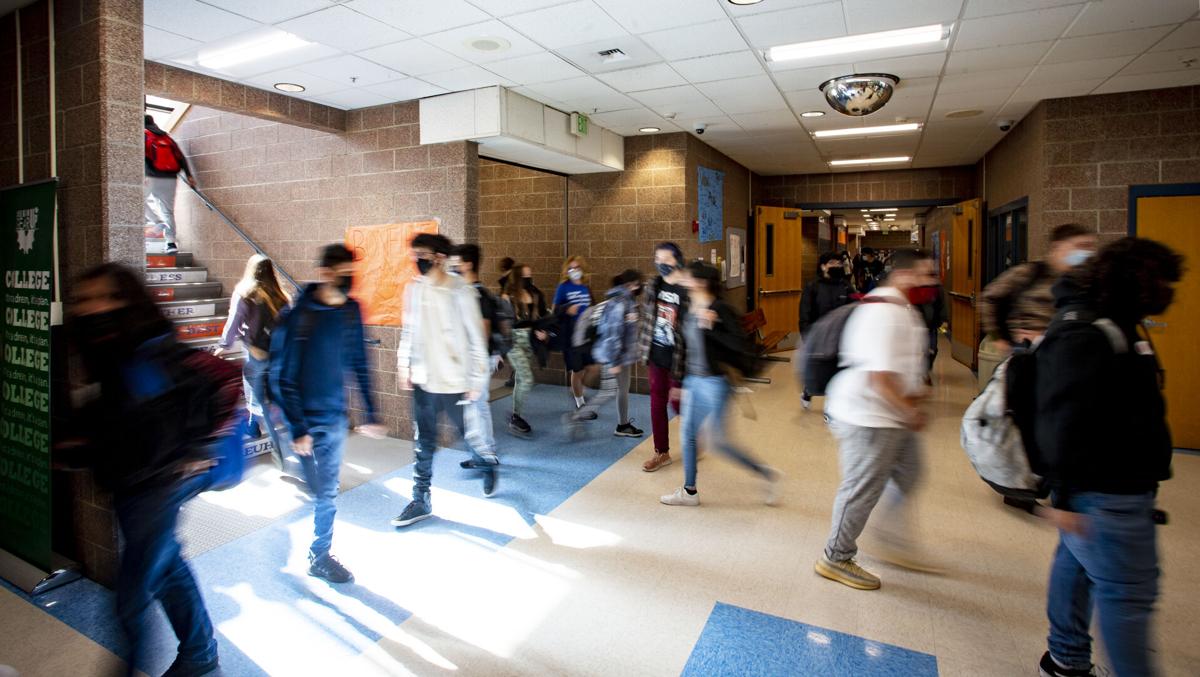 Students on Oct. 11, 2021, pass through the hallways of Umatilla High School. The Umatilla School District is taking steps to quash “devious licks,” a social media trend that involves students videoing themselves vandalizing schools. 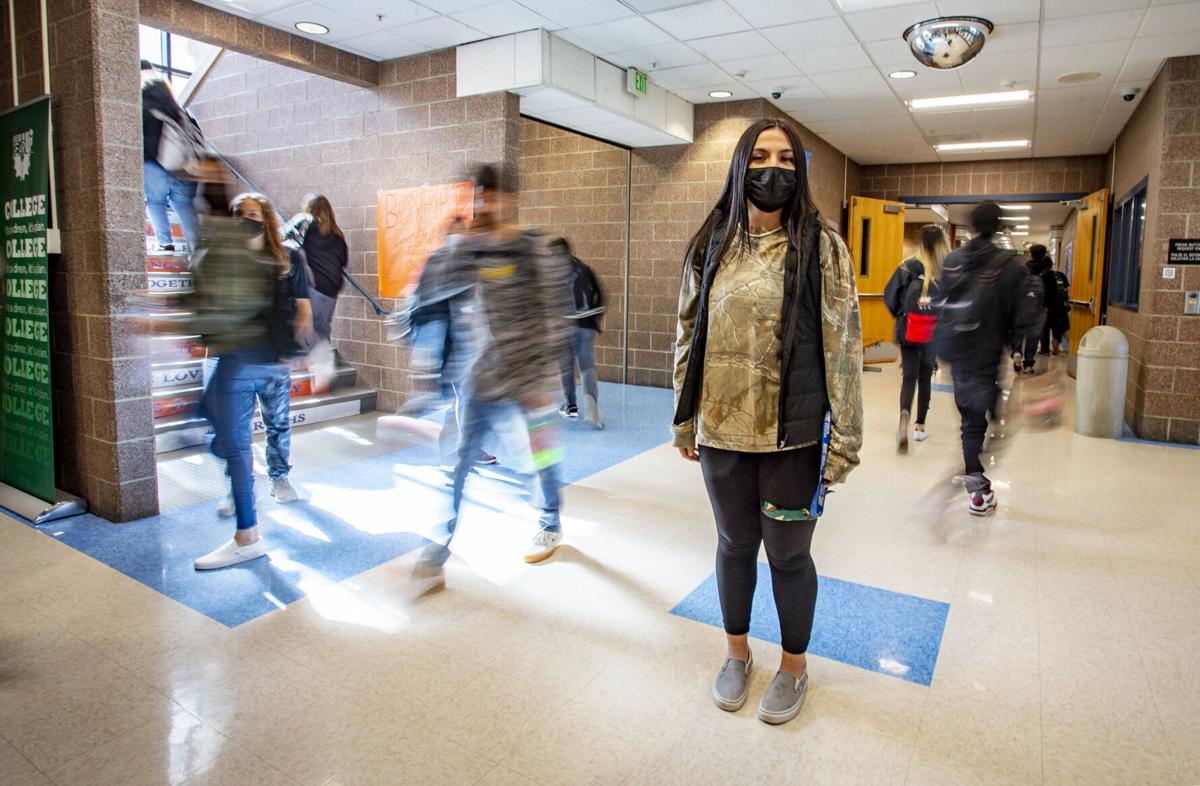 Jara Montez poses for a portrait during a passing period Monday, Oct. 11, 2021, at Umatilla High School in Umatilla. Montez, like other youths, uses social media to connect to friends, yet also feels some platforms hurt her quality of life. 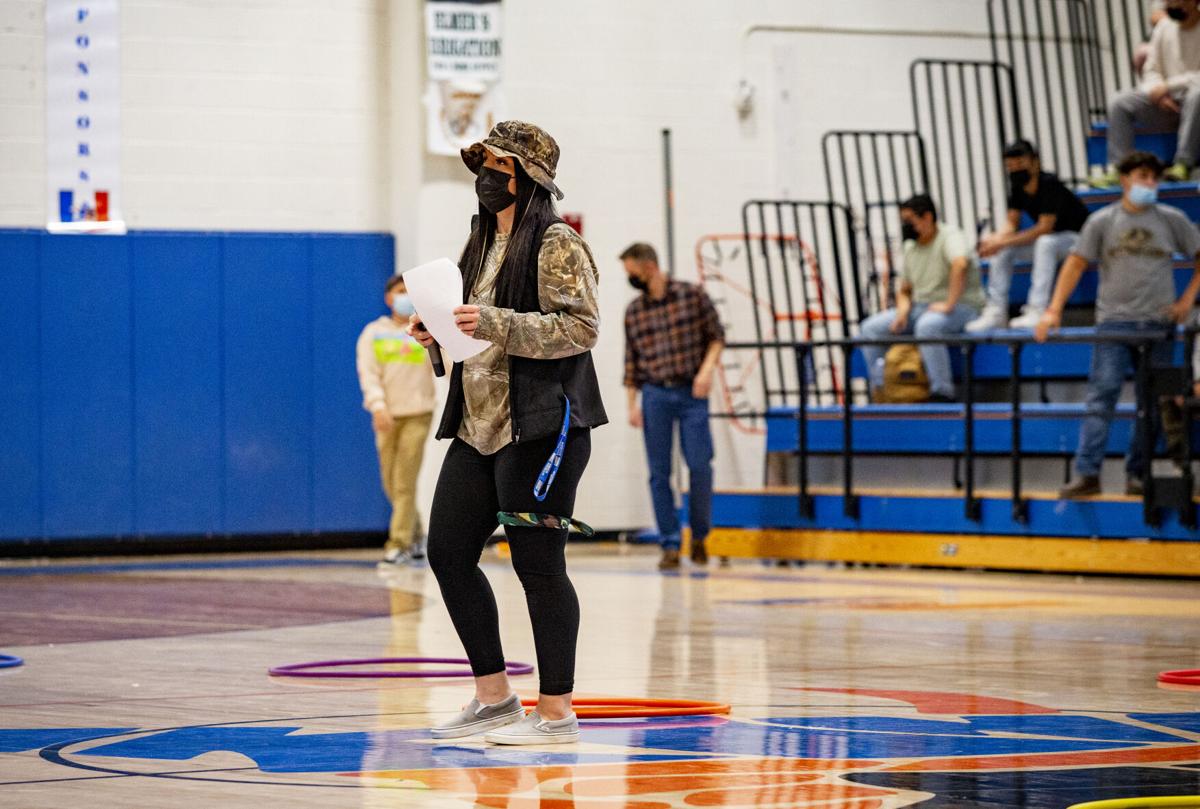 Jara Montez speaks to members of the Umatilla High School student body Monday, Oct. 11, 2021, during a homecoming assembly at the high school in Umatilla. 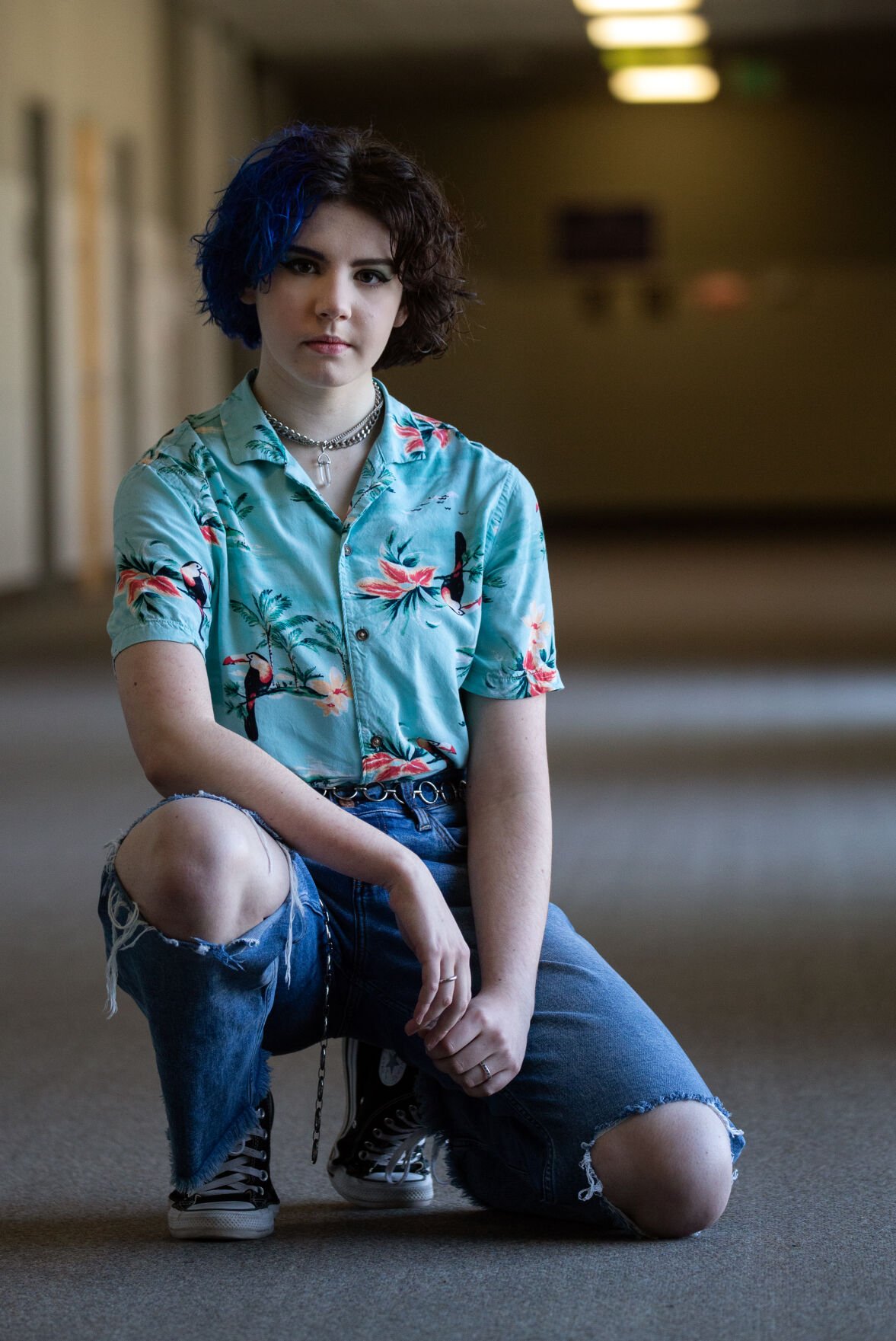 Laylah Lucas, junior at Hermiston High School and mental health advocate, struggles with depression and anxiety, which she attributes in part to experiences on social media. 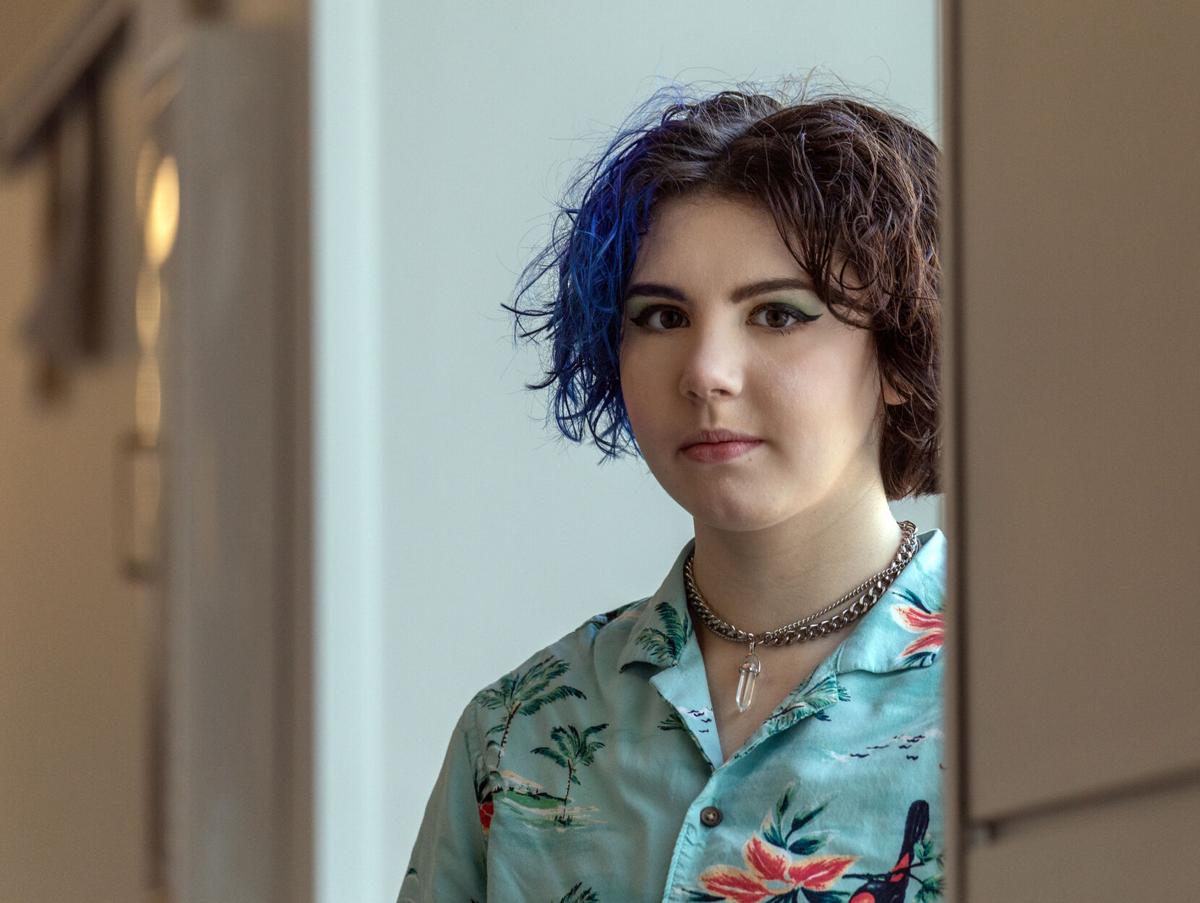 Laylah Lucas, junior at Hermiston High School and advocate for mental health, struggles with depression and anxiety, which she attributes in part to experiences on social media. 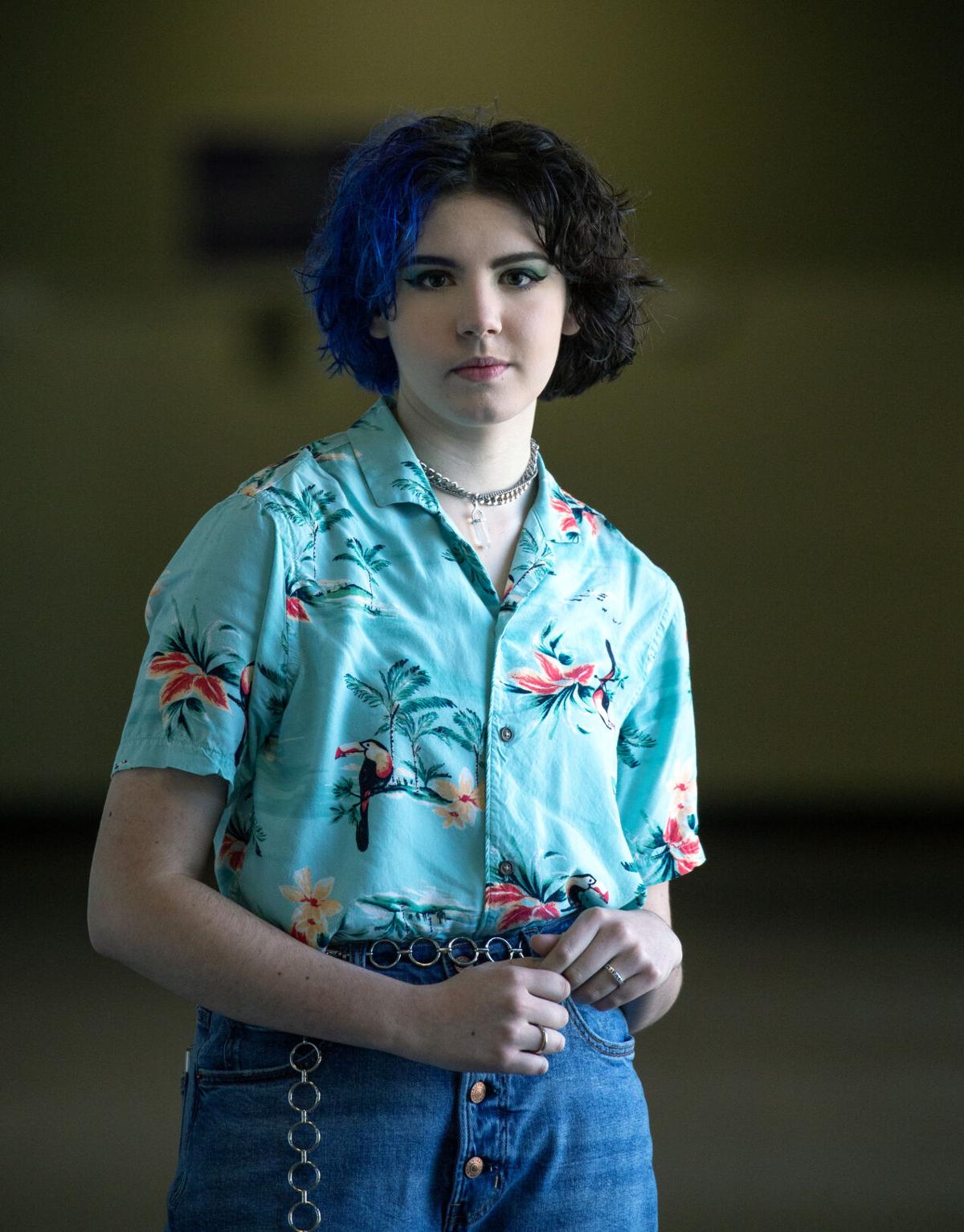 Laylah Lucas, junior at Hermiston High School and mental health advocate, struggles with depression and anxiety which she attributes in part to experiences on social media.

Students on Oct. 11, 2021, pass through the hallways of Umatilla High School. The Umatilla School District is taking steps to quash “devious licks,” a social media trend that involves students videoing themselves vandalizing schools.

Jara Montez poses for a portrait during a passing period Monday, Oct. 11, 2021, at Umatilla High School in Umatilla. Montez, like other youths, uses social media to connect to friends, yet also feels some platforms hurt her quality of life.

Jara Montez speaks to members of the Umatilla High School student body Monday, Oct. 11, 2021, during a homecoming assembly at the high school in Umatilla.

Laylah Lucas, junior at Hermiston High School and mental health advocate, struggles with depression and anxiety, which she attributes in part to experiences on social media.

Laylah Lucas, junior at Hermiston High School and advocate for mental health, struggles with depression and anxiety, which she attributes in part to experiences on social media.

Laylah Lucas, junior at Hermiston High School and mental health advocate, struggles with depression and anxiety which she attributes in part to experiences on social media.

At 9 years old, she watched toy reviews on the popular video platform. Then she turned to Pinterest to view other artists’ work. Then, in eighth grade, she got a cellphone and felt more independent. So, she started her Instagram account, seeking connection with other teens.

She started spending more and more time on social media. She turned to TikTok, where she fell down rabbit holes, watching video after video. She was hooked.

Over time, her mental health suffered.

The Instagram influencers, their perfect lives and bodies, made her feel insecure about her own life and body. She watched videos from her friends and felt she always was missing out. She said she’s bisexual, so when threats against the LGBTQ community spread across social media during Pride month in June, she was terrified.

“That’s scary, because you don’t know if that’s true or a rumor,” said Lucas, a 16-year-old Hermiston High School junior who struggles with depression and anxiety. “And that rumor spread like the plague. And that’s a lot of mental bog. Because now you’re afraid. Especially if you’re like me.”

Lucas realized what has long been understood but has reached the national spotlight again in recent weeks: Social media plays a major role in the declining mental health of teens.

“I feel like if you’re a teen and you say that you haven’t then you’re lying,” said Lucas. “It’s impossible to not be intimidated or insulted or made to feel bad about yourself because of social media.”

The revelations, uncovered through a trove of the company’s internal documents, show that leadership among the social media giants knew for years that platforms such as Instagram were having serious effects on the mental well-being of teens — especially young women. Yet the company chose not to disclose that information and has made meager efforts to stop it.

“These are impressionable young people,” Wyden told the Hermiston Herald, adding that Facebook is “taking advantage of them.”

Wyden, a proponent of digital privacy legislation, is pushing forward the Algorithmic Accountability Act, which requires that companies audit “high-risk systems” such as artificial intelligence for decisions that contribute to harmful content. The act is meant to curb the spread of misinformation, bias or discrimination, and he said he believes it will attain bipartisan support.

But the activity in Washington D.C., only hints at what teens are experiencing in rural Eastern Oregon. Teens, counselors, school district officials and political figures around Umatilla County said although social media has impacted teenage mental health for years, the toll has worsened during the pandemic. All that has shifted is the question of who’s to blame.

“I feel social media has made unrealistic standards for what people should look like or be like,” said Jara Montez, a 17-year-old senior at Umatilla High School.

Montez estimated she spends about seven or eight hours a day on social media. She checks the apps between classes. Like Lucas, she enjoys the connection she feels to her friends and family, but said she feels worse about herself while watching attractive people on TikTok and other platforms.

Montez lamented that staying on social media is “just a thing that kids do nowadays.” Other students don’t typically talk about how the apps are affecting their mental health. She said she thinks she could quit if she wanted to, but it would be difficult. That’s where all her friends are.

“I would really love and enjoy life without social media,” she said.

Maddie Stuvland, a counselor at Pendleton High School who meets with the school’s junior and freshman class, said social media has increasingly become a regular part of daily discussions with the students she sees. She said her students often are surprised when she points out social media might be having a negative effect on their mental well-being.

“I think they’re a bit shocked,” she said. “They’re not aware that it’s affecting their mental health. There really isn’t anything out there that informs young girls or young boys about the impact it has.”

They express feelings of inferiority when viewing platforms such as Instagram, where they compare themselves through what she calls “a highlight reel.” She said high usage of social media platforms are driving some students to stay up later which, in turn, impacts their mental health and education.

“You’re always posting things that you’re either accomplishing or things that you’re proud of and there are filters and you always have a smile on your face,” she said. “And it’s not realistic. They don’t see any of the hardship or difficulty.”

Stuvland said she sees more teens acknowledging the negative effects of social media today. But the platforms remain too good to be true, explaining that among many influencers and bloggers, “there’s not an image or post that’s not perfect.”

“The negative effects are outweighing the positive effects, at least in teens,” said Dee Lorence, a counselor at Umatilla High School, who said the apps are causing her students to experience depression, anxiety and isolation. “Keeping it inside, or keeping it to ourselves, is not helping in any situation. If we’re concerned about something, we must find someone we know and trust and will give good advice.”

Nick Allen is a professor of clinical psychology and the director of the Center for Digital Health at the University of Oregon. For years, he studied the mental health of young people.

“When you look at mental health across the lifespan, you see that this period from 12 to 24, that’s the period where the vast majority of people are going to have mental health difficulties,” he said. “That’s when it emerges. It’s the most critical time in life for understanding prevention and early intervention for mental health problems.”

The arrival of social media enabled kids to enter entire worlds of largely uncensored information without parental oversight, he said. For some, those platforms promoted growth and gratification. They helped well-off teens gain friends and notoriety. They provided marginalized young people a way to connect with communities they never could before.

But for some vulnerable students, cyberbullying, anxiety, depression, fear of missing out — or FOMO— and an endless flood of information left them feeling overwhelmed, he said.

There are multiple factors that influence the impact social media has on mental health, none of which are new, Allen said. Using the apps during the day is typically less harmful overall than at night, he said. Active usage like posting things is better than passive usage, or scrolling.

But what is lacking, he said, is any sort of disclaimer warning users about the risk. Much like the automobile industry, he said social media companies need to do a better job of making people aware of the possible harm that could come from extended use of the platforms.

“Over time, there’s been regulation, there’s been safety measures, and cars are much safer than they used to be,” he said. “I think social media is going to be a very similar story … Initially, the companies don’t want to admit it. But when they do admit it and the government starts putting proper regulations and safety features, then we’ll be in a better place and we’ll be able to enjoy the benefits of social media and minimize the risk.”

Lucas, the 16-year-old student from Hermiston, said she wants to encourage more people to talk about their mental health and the effects social media have on it. A self-described mental health advocate, she said she believes little can be done to change the platforms themselves. But what she can help change, she said, is the relationships her peers have to social media.

“This is equally good and equally horrible,” Lucas said of social media. “The only way to solve the issues would be to get rid of the mean people, get rid of people who are bad, get rid of insecurity. But that’s impossible. I don’t think there are changes that can be made. This will be the way this is until there’s another cultural shift.”