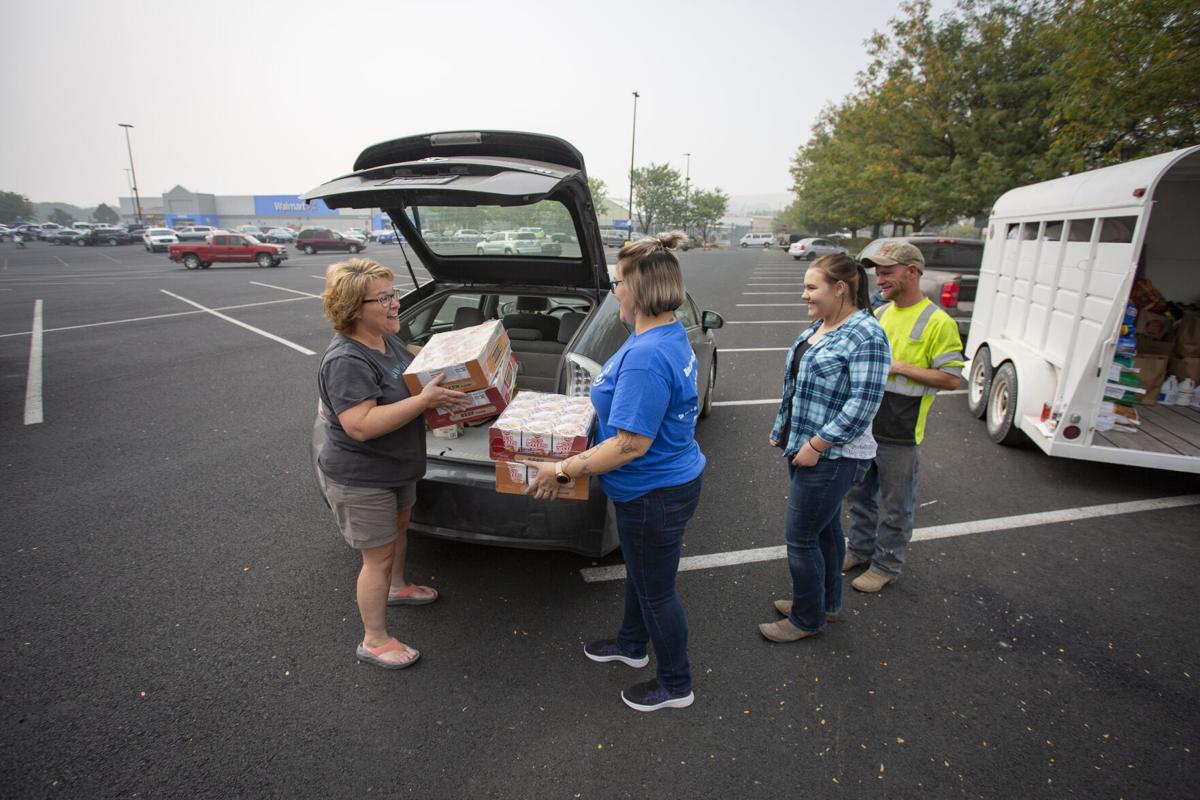 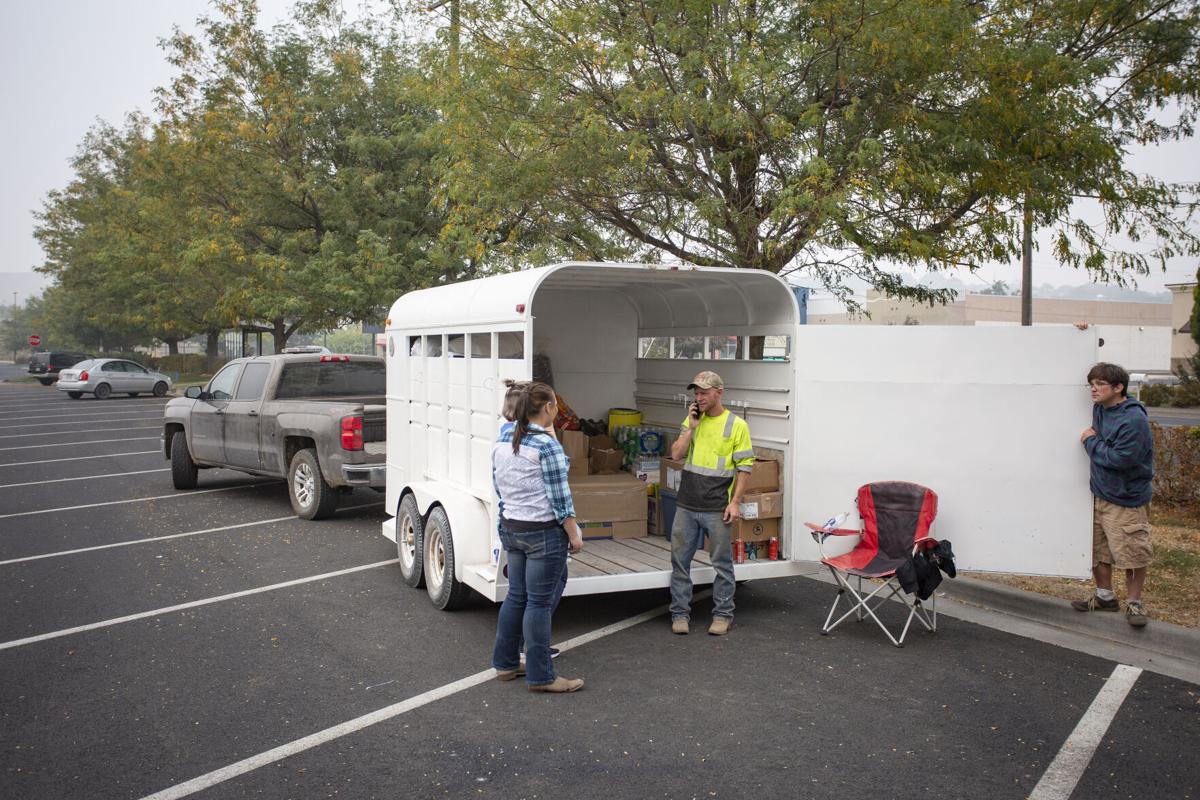 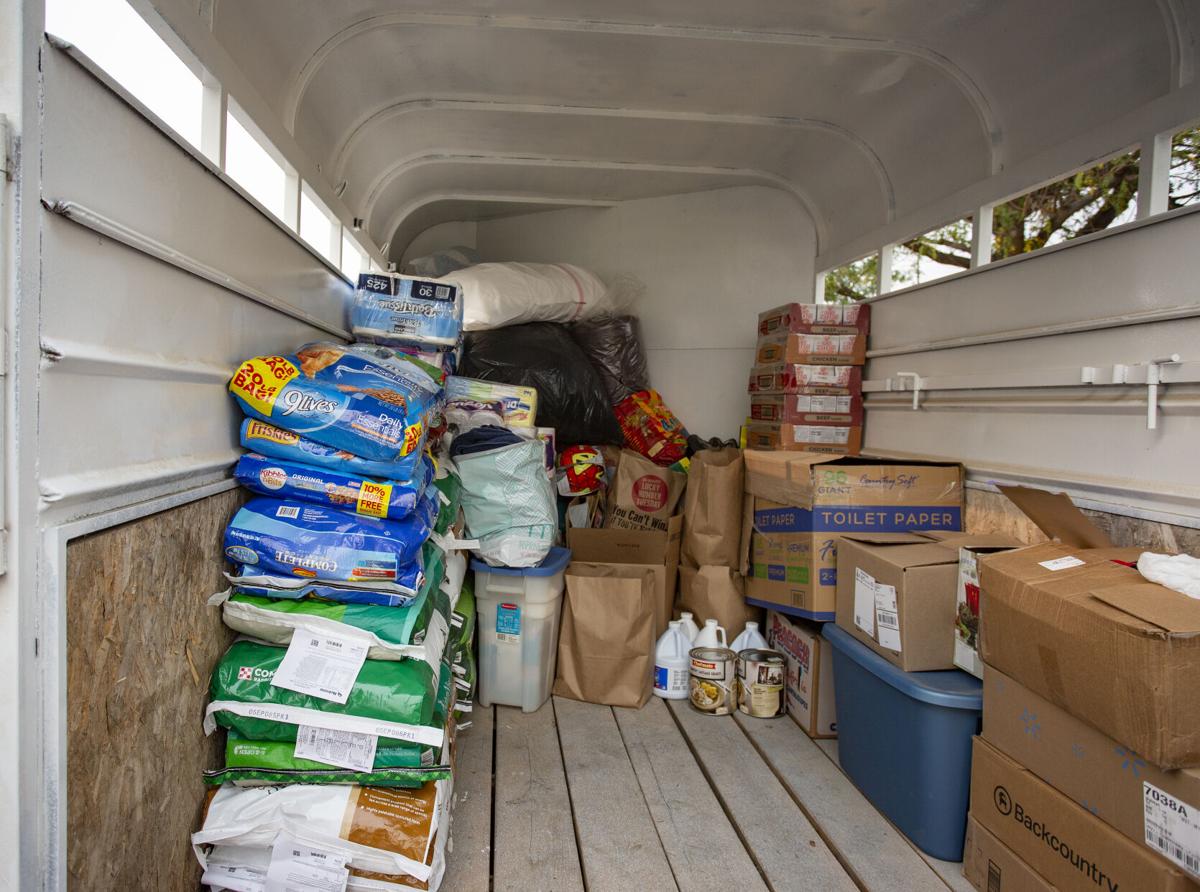 A horse trailer sits partially loaded with goods for fire victims in the parking lot of the Pendleton Walmart on Friday, Sept. 18, 2020. A group of Umatilla County volunteers including David Dunn, Caryn Dunn, Hailey Shepherd and Weston Simonton gathered donations from community members to take to Clackamas County.

A horse trailer sits partially loaded with goods for fire victims in the parking lot of the Pendleton Walmart on Friday, Sept. 18, 2020. A group of Umatilla County volunteers including David Dunn, Caryn Dunn, Hailey Shepherd and Weston Simonton gathered donations from community members to take to Clackamas County.

David Dunn returned Sunday, Sept. 20, from his second trip to Clackamas County, where he dropped off much-needed supplies to help those affected by the fires that have devastated Western and Southern Oregon.

The Pendleton man, who spent part of his childhood in Molalla, also has a brother, Damion Dunn, who lives in Mulino. His sister-in-law, Casey Buckmaster, lost her home and belongings in the fire that destroyed a good part of Talent, a town of 6,500 people that is 7 miles south of Medford.

“My wife (Caryn) and I have a big heart for helping people,” Dunn said. “People were packed in the Clackamas County Fairgrounds. To see it in person was astonishing.”

Dunn, the executive director at Redemption Life Services, took bottled water, hygiene items, pet food, and supplies for livestock on his latest trip. The donations came from Eastern Oregon people wanting to help in any way they can. The Dunns accepted donations at the Walmarts in Pendleton, Hermiston and College Place, Washington.

“People from Eastern Oregon differ from those on the west side, but when it comes to something like this, people want to know how they can help,” Dunn said. “It’s nice to come together.”

Dunn not only delivers supplies, but offers comfort to those who have lost nearly everything they owned.

“It’s good to talk to the volunteers and displaced people and share the gospel with them,” Dunn said. “You don’t know me, but I love you and I’m here to help. You don’t know how far those words go to helping people in crisis.”

Dunn also praised Grant County Sheriff Glenn Palmer, who helped organize a collection of items that were taken to Bend, and then to Southern Oregon and Clackamas County.

Dunn plans more trips to help those in need. If you would like to donate, he can be reached at 541-612-0506, or by email, redemptionlifeservices@gmail.com.

Dunn’s family is but a small part of those reaching out to help fire victims.

“We want to help our fellow Oregonians who have lost nearly everything,” Cathy Stolz, president of the Auxiliary Unit 37, said in a news release.

However, Stolz said on Tuesday, Sept. 22, that they had stopped collecting items after the Estacada post called and said they did not have room to store any more donations for now.

Statewide, more than a dozen fires have burned more than a million acres, and at least 23 people have died.

The fires in and around Clackamas County are 25% contained and have burned more than 130,000 acres as of Monday, Sept. 21.

The South Obenchain Fire in Jackson County has burned more than 32,000 acres and was 65% contained as of Sept. 21.

Most of the homes lost were in Phoenix and Talent, two small towns between Ashland and Medford. Although law enforcement agencies and the Federal Bureau of Investigation have released statements saying most of the state’s fires have causes, such as downed power lines instead of arson as rumored, a man was arrested Sept. 11 for arson and other charges, including possession of methamphetamine, in connection with the Almeda Fire.

For those looking for more ways to help fire victims, a list of reputable organizations that are collecting monetary donations, ways to donate your time and locations where supplies can be dropped off, can be found at traveloregon.com under the Help Wildfire Victims link.

Organizations listed include the chapters of United Way, Salvation Army and other relief organizations serving the areas affected, plus statewide organizations such as the Oregon Community Foundation, Oregon Food Bank and the Wildland Firefighter Foundation.

The American Red Cross has launched the Northwest Response Fund in support of those affected by wildfires in Oregon and Washington. Donating is as easy as texting the word “relief” to 503-226-5088.

ACCESS, a Medford nonprofit that provides food and other services to residents in need, has been taking donations to help feed people displaced by the fires. Every dollar donated feeds four people. There is a donation link (under Ways to Help) on their website at accesshelps.org.

There are several agencies helping pets in Southern Oregon.

One of them is Southern Oregon Veterinary Specialty Center, which has set up a GoFundMe to help with food and medical costs for displaced and injured pets. The fund had more than $81,000 on Sept. 21, but the volume of animals that need help is vast.

Committed Alliance to Strays (C.A.T.S.) in Medford has taken in several cats waiting for their families to find them. The group also is offering free cat food and litter for those in need. If you would like to make a donation to C.A.T.S., it has a donation link on its website at kittensandcats.org.

The Oregon Cattlemen’s Association is also collecting donations to assist farmers, ranchers and livestock evacuated during the fires through Paypal or by emailing robyn.smith@orcattle.com to donate supplies.