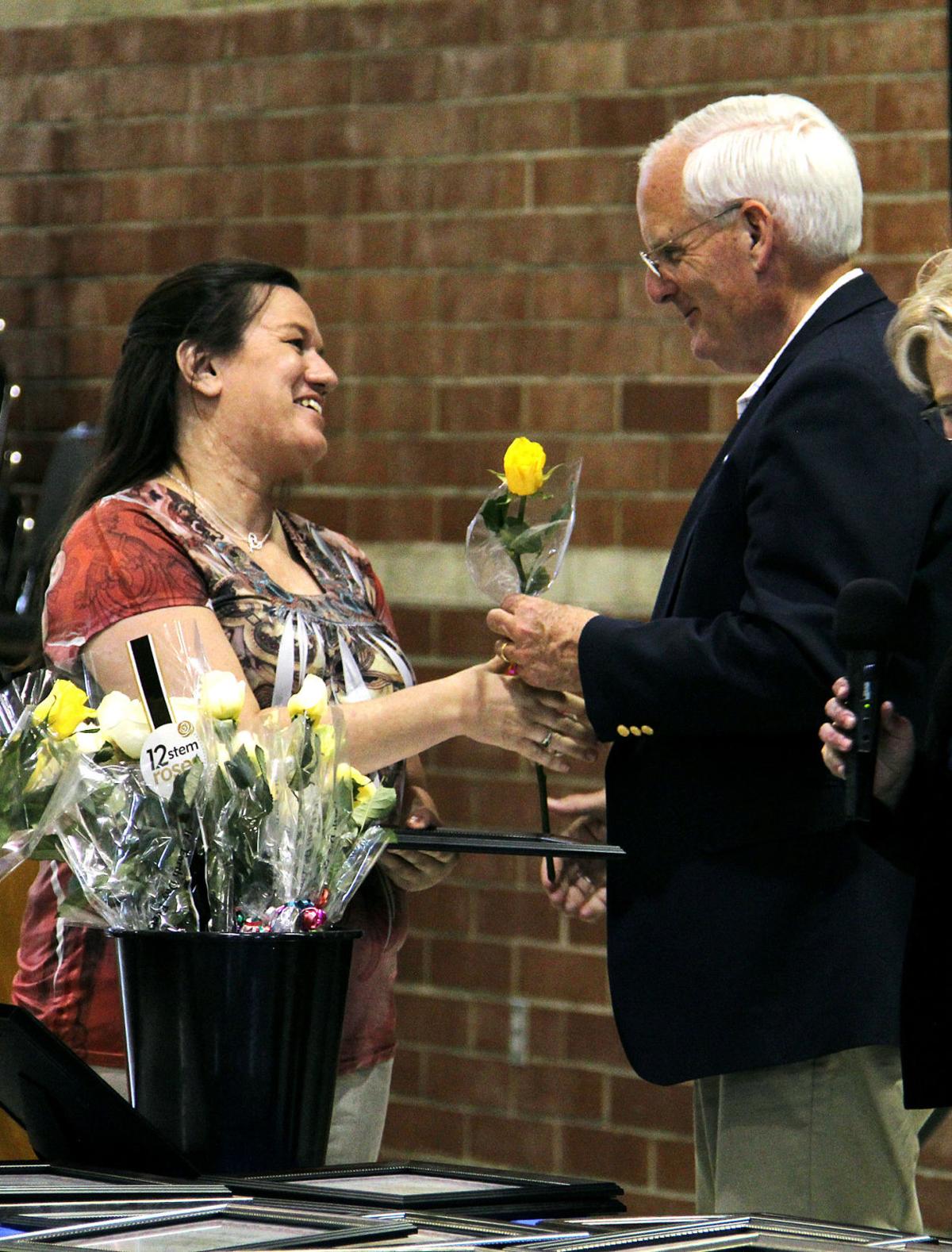 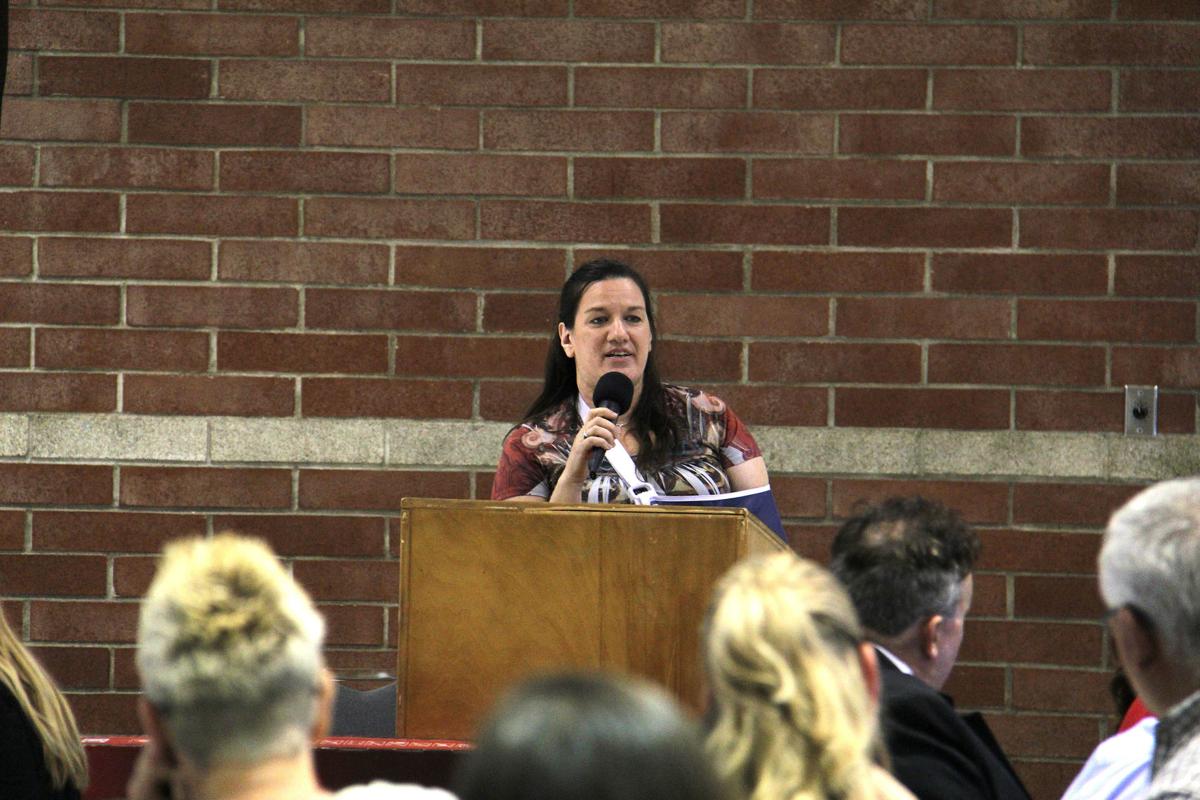 Christine Massingale, of Hermiston, addresses the crowd at Umatilla County Drug Court graduation on Friday. Massingale is one of 46 local residents who will complete the program this year. 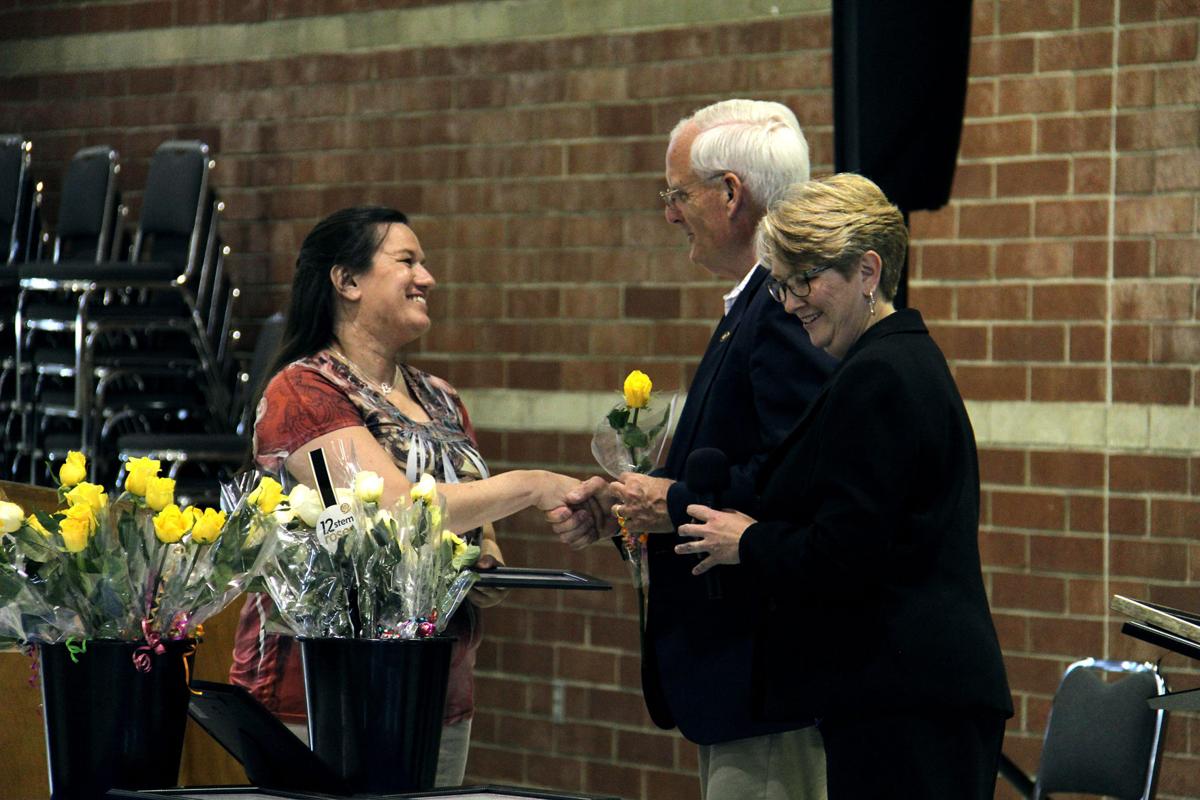 Christine Massingale, of Hermiston, shakes hands with state Sen. Bill Hansell, R-Athena, while Circuit Court Judge Eva Temple looks on at Umatilla County Drug Court graduation on Friday. Massingale is one of 46 local residents who will complete the program this year. 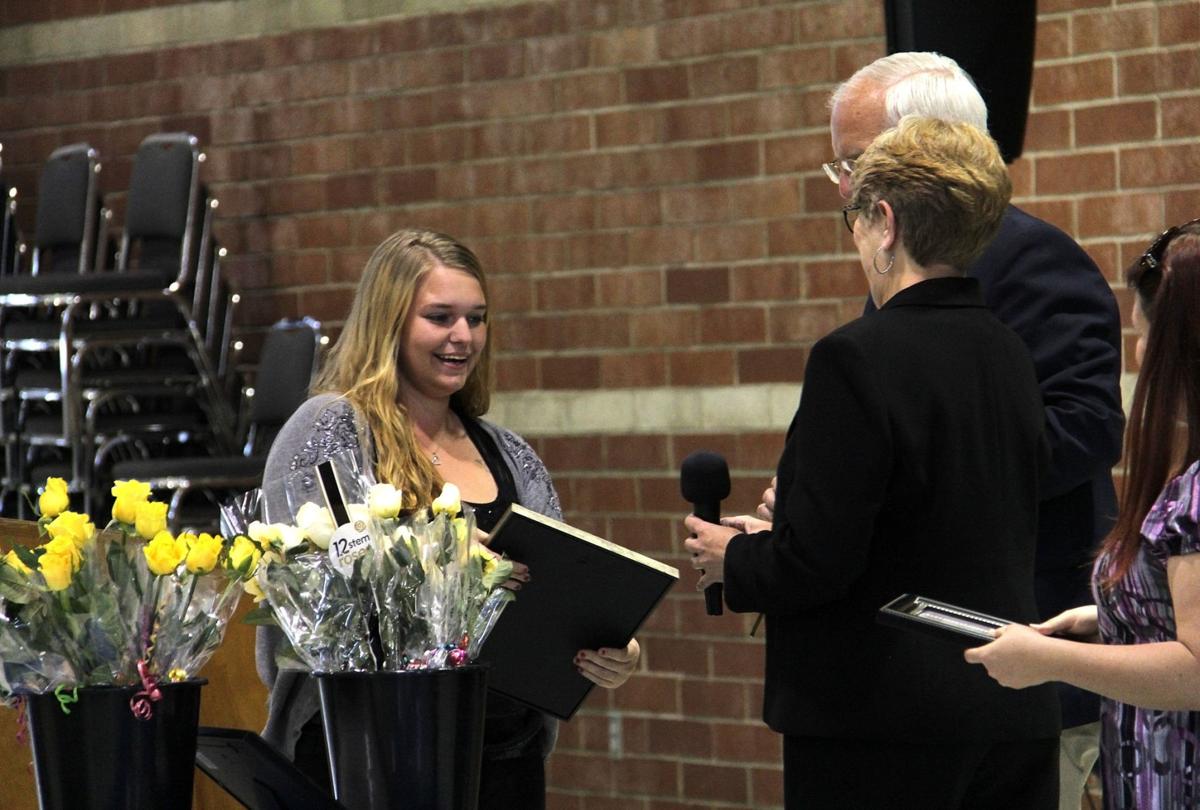 Morgan Johnson, of Pendleton, receives a certificate during the Umatilla County Drug Court graduation on Friday. After struggling with a methamphetamine addiction, Johnson credits drug court with saving her life.

Christine Massingale, of Hermiston, addresses the crowd at Umatilla County Drug Court graduation on Friday. Massingale is one of 46 local residents who will complete the program this year.

Christine Massingale, of Hermiston, shakes hands with state Sen. Bill Hansell, R-Athena, while Circuit Court Judge Eva Temple looks on at Umatilla County Drug Court graduation on Friday. Massingale is one of 46 local residents who will complete the program this year.

Morgan Johnson, of Pendleton, receives a certificate during the Umatilla County Drug Court graduation on Friday. After struggling with a methamphetamine addiction, Johnson credits drug court with saving her life.

“Without this program, I would be dead.”

For most situations, the quote is hyperbolic, spoken with passion and exaggerated to emphasize a point. For the graduates of Umatilla County Drug Court, the quote has sincerity.

“I wasn’t sure what I was going to do, but I was afraid. I was afraid of losing my family, of going to jail, afraid that I couldn’t stay clean,” Christine Massingale, of Hermiston, said. “Drug Court saved my life. It really did.”

Umatilla County Drug Court is an intensive drug and alcohol treatment program that combines group sessions and individual counseling as an alternative to incarceration. Participants attend rehab, have regular drug tests, have counseling and do community service. On completion, many members have criminal charges dismissed.

“Over the years, we’re now in the hundreds of graduates, most of which are very successful,” Circuit Court Judge Eva Temple said Friday. “This is what works in Umatilla County.”

The recidivism — reoffender — average for Umatilla County is 20.35 percent — a 10 percent decrease since the program was implemented in 2006, according to Umatilla County Community Justice Director Dale Primmer. Most Drug Court participants — 75 percent — do not receive a new conviction in the three-year period tracked after graduation. That 75 percent figure stays consistent at the county, state and national level.

“If you were to pull up the jail roster on any day, 80-90 percent of those are drug-related charges,” Temple said. “If you took out everyone in jail who had a drug- or alcohol-rleated crime, we’d have 10-12 people left.”

Not everyone charged with a drug- or alcohol-related crime lands in Drug Court; however. The program focuses on medium and high-risk offenders, and low-risk offenders who complete probation without re-offending do not enter the program.

The program is designed to last nine months but may take years.

“A lot of it depends on the support. People who have family support often do better. If you don’t have that support structure, it takes longer to get back on your feet,” Temple said.

Morgan Johnson, of Pendleton, is one of those cases. After 2 1/2 years in the program, Johnson graduated Umatilla County Drug Court on Friday. She, like Massingale, says drug court saved her life. Johnson took her first hit of methamphetamine on the night of her high school graduation.

“When I was out there using, I didn’t think I had a problem — until I got caught,” she said. “This showed me a new way to live. I’m really very grateful that I was put into Drug Court.”

The program helps work with users who have lost everything as well as those who may appear to have it together. Massingale, for example, managed to attend college classes and maintain a job while struggling with her addiction. When she committed to the Drug Court program, she suddenly had to struggle with attending hours of meetings, counseling and drug testing each week.

To complete Drug Court, participants are expected to have a job or be enrolled in school fulltime.

“We’re really trying to create responsible citizens by the end of the program,” Temple said.

During the ceremony, Temple and state Sen. Bill Hansell, R-Athena, presented graduates with plaques and a yellow rose of recovery. Craig Rodriguez, a Umatilla Drug Court Alumnus, spoke during the graduation ceremony.

“Without Drug Court, I probably wouldn’t be standing here today,” said Rodriguez. “It was a path to salvation for me.”

Rodriguez, one of the first graduates of Umatilla Drug Court, grew up in a drug environment and became a cocaine dealer — and addict — at the age of 17. It took the death of his mother, the loss of his children and an overdose for him to give rehabilitation a chance.

“Drug Court is just a name. It’s the people that work and keep hope alive,” he told current participants during the graduation. “There is hope.”

The graduates each had advice to those struggling with addictions: Join Drug Court and take it seriously if it’s an option, focus on what’s important and take one day at a time.

“It would be a really wise decision to join,” Johnson said. “You have to be open minded, you have to want to be there, but you can do it.”