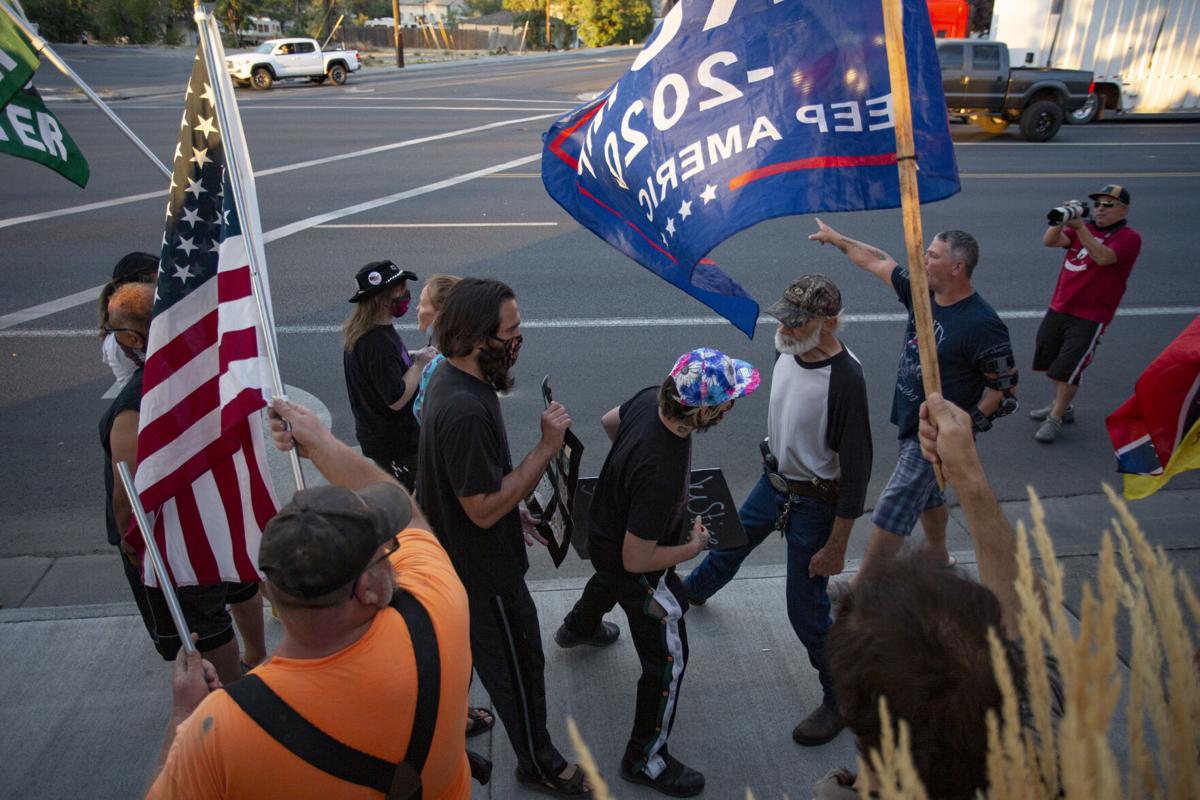 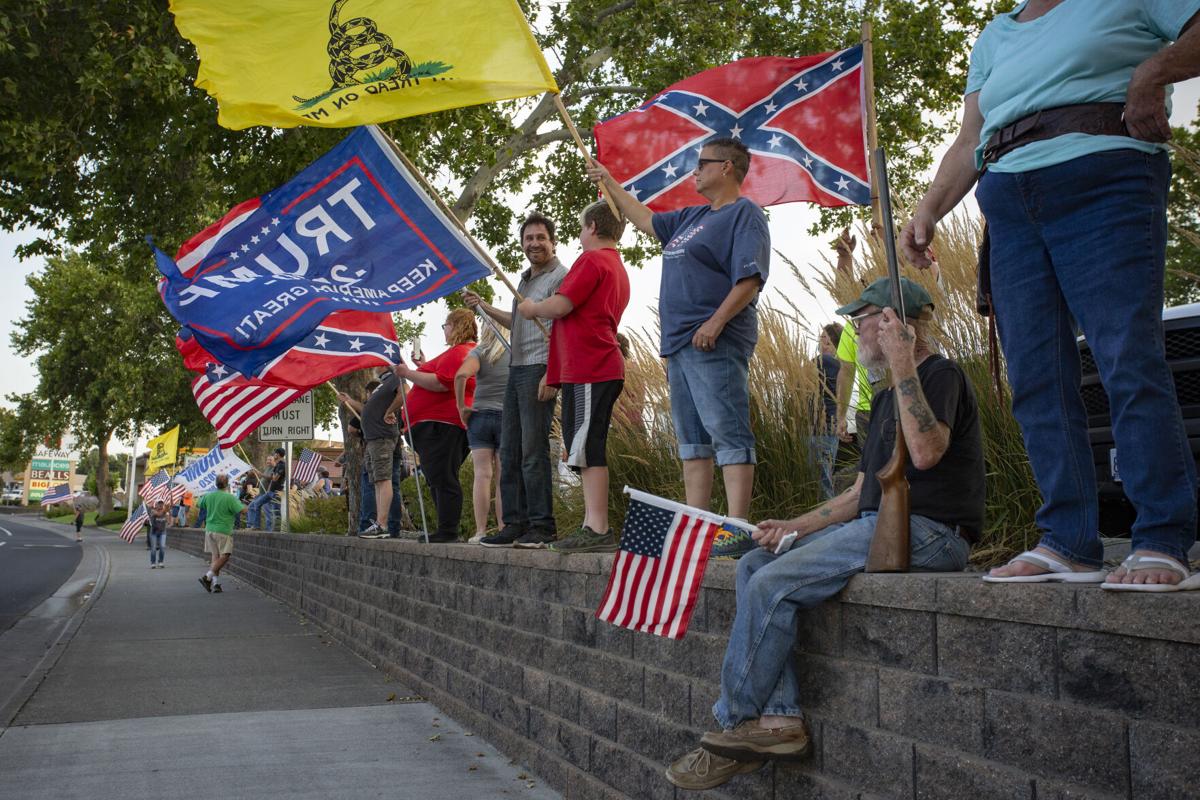 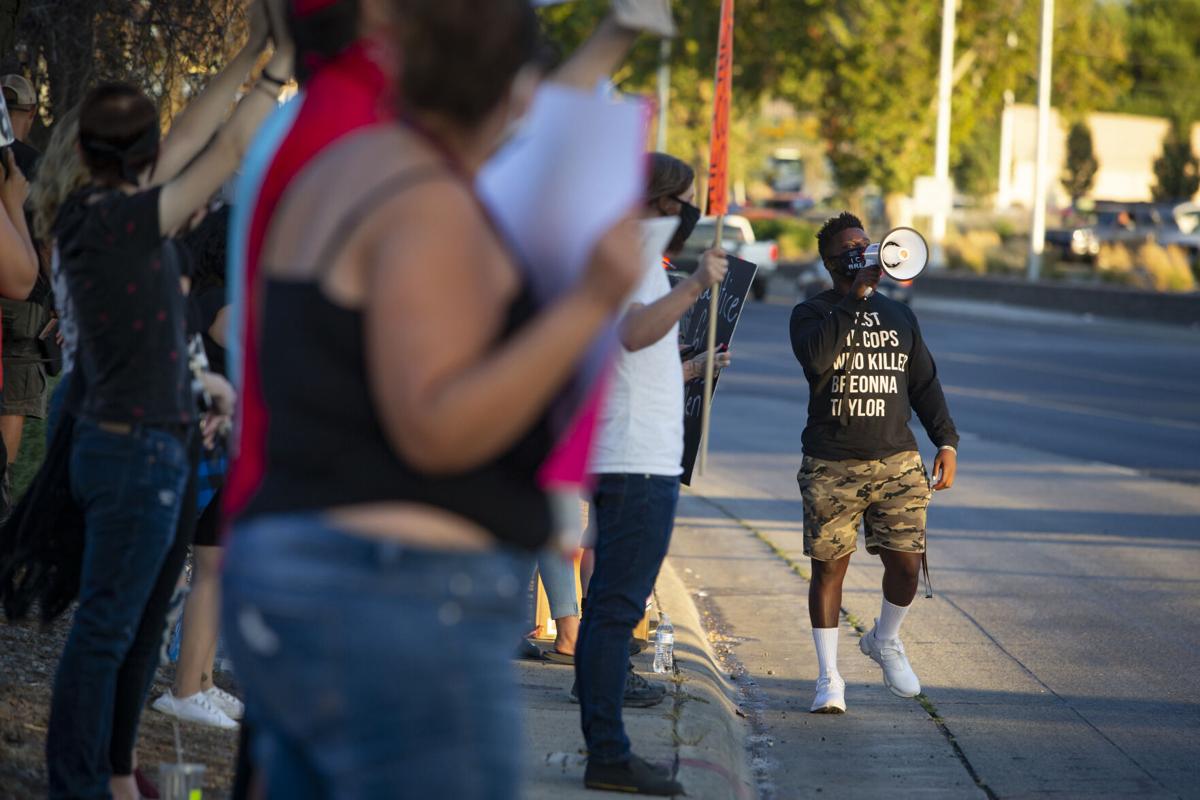 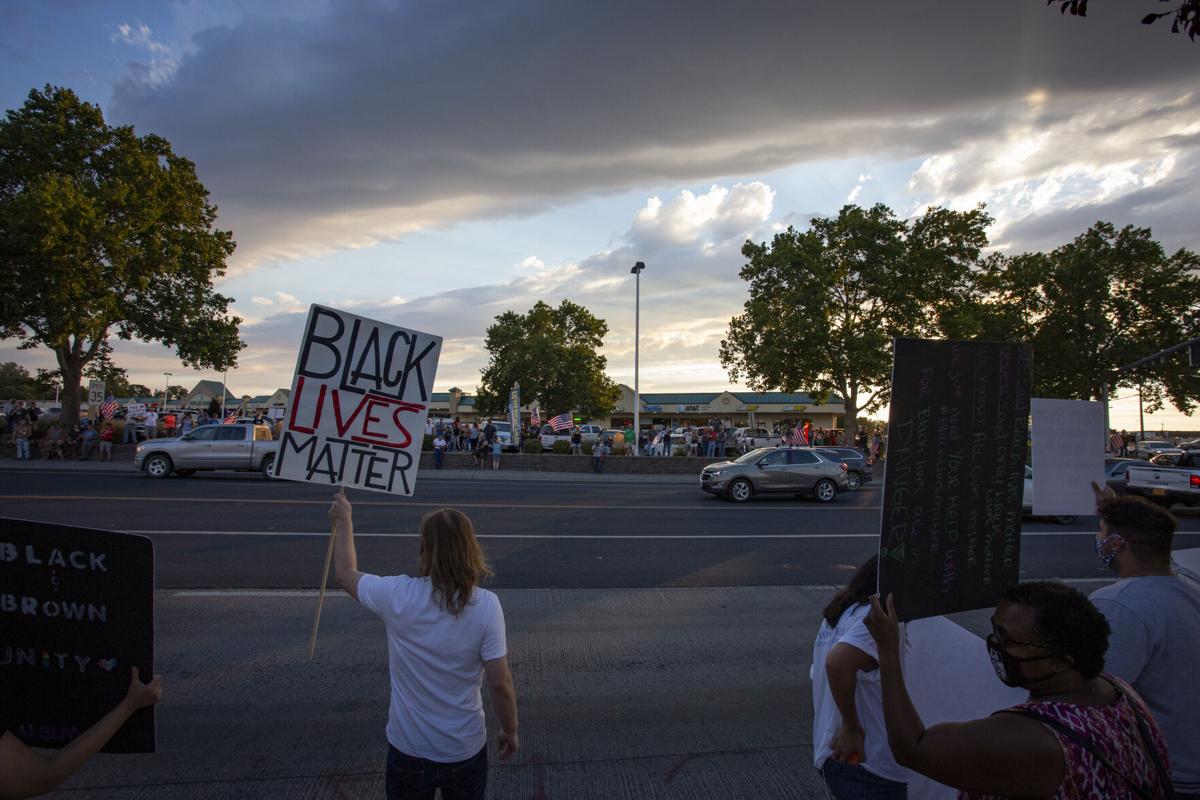 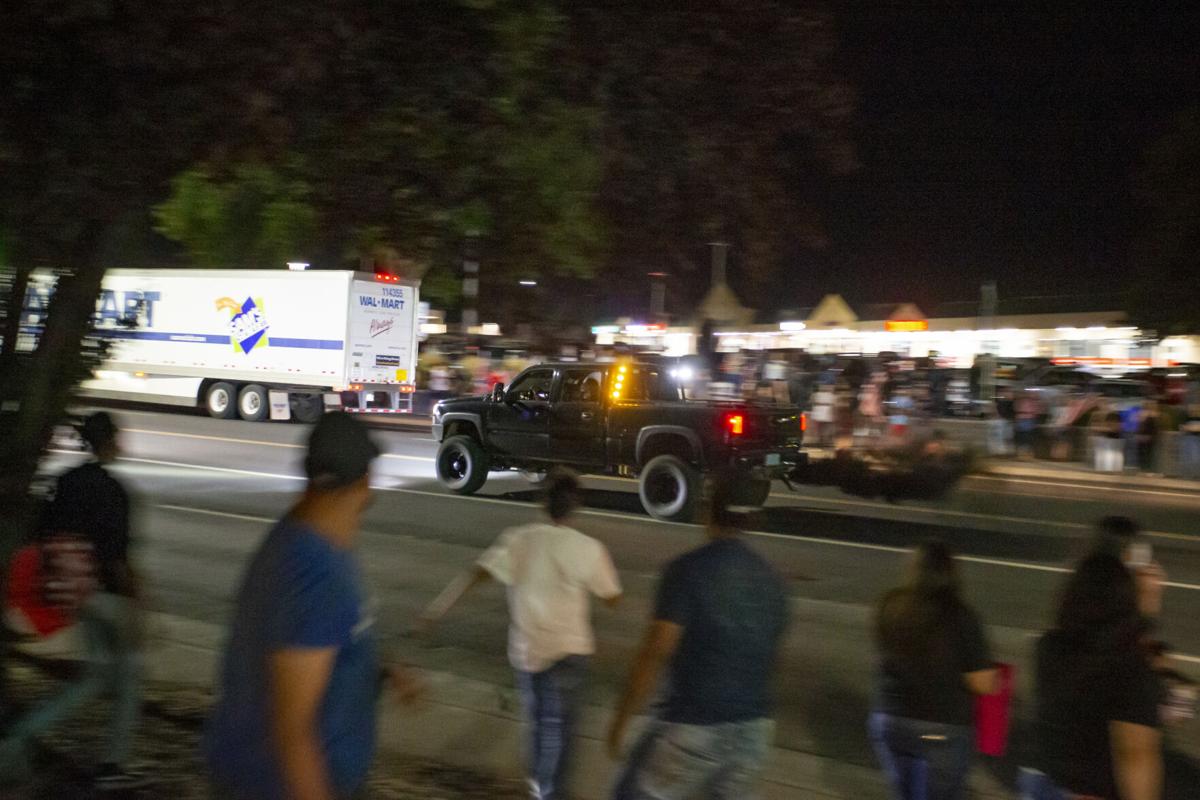 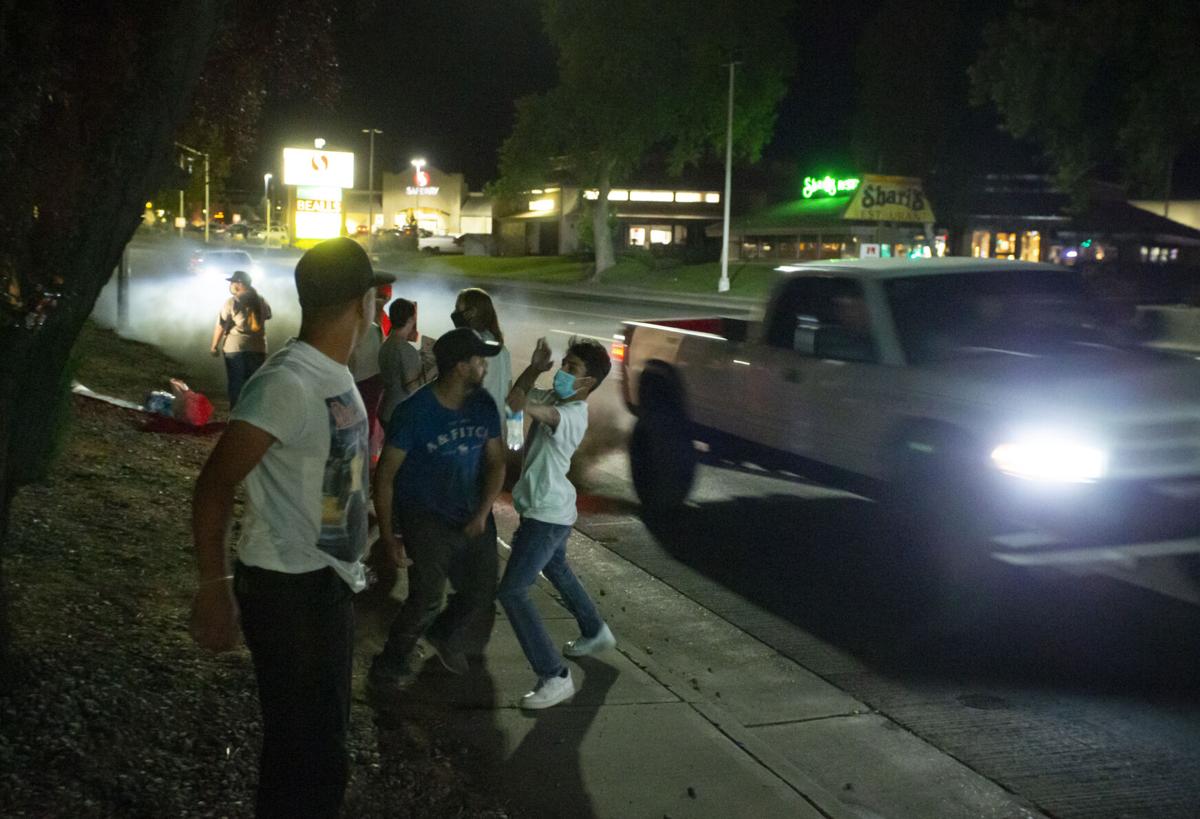 Fellow Black Lives Matter protesters restrain a protester attempting to throw rocks at trucks that have been “rolling coal” past the group of protesters. A crowd of roughly 40 Black Lives Matter Protesters were met with about 100 counter-protesters at the intersection of Highway 395 and East Highland Avenue in Hermiston on Friday, Aug. 21, 2020. 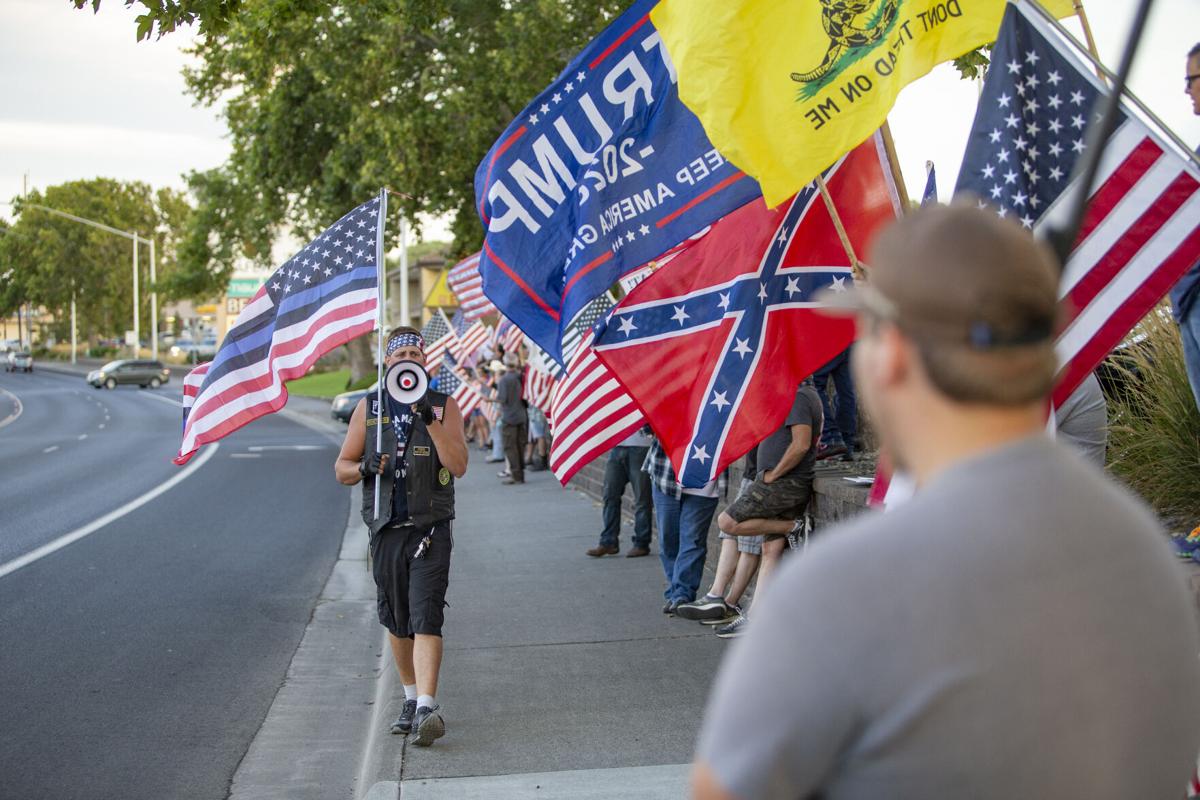 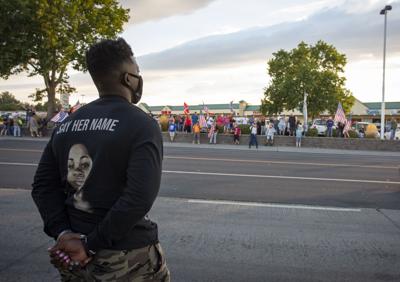 Rising tensions pushed a Black Lives Matter protest and counter-protest in Hermiston late into the night twice over the weekend, causing high overtime costs for the Hermiston Police Department.

A shooting unrelated to the protests took place in Hermiston on the afternoon of Friday, Aug. 21, and Hermiston Police Chief Jason Edmiston said between the shooting and the protests that took place Aug. 21-22, the department used up the equivalent of a month and a half of overtime pay in two days.

That doesn’t count the extra hours put in by the department’s leadership paid on a salaried basis, he said.

A group of Hermiston residents have been holding a Black Lives Matter protest on Friday evenings, which organizers say usually draw 10 or fewer people. But a Facebook event created for the Aug. 21 protest sparked a rumor online that, in the words of one post shared 85 times, “BLM & ANTIFA Members from the Portland area will be coming to Hermiston,” possibly in the range of 150 people.

By 6 p.m. — the scheduled start to the Black Lives Matter protest — about 100 counter-protesters had gathered in the strip mall parking lot on the west side of the Highway 395 and Highland Avenue intersection. Many were openly carrying handguns or rifles, and most were carrying flags (America, Confederate, Trump, Thin Blue Line and Don’t Tread on Me) instead of signs.

The group’s apparent organizer, who declined to give his name to the Hermiston Herald, asked those gathered to not engage with the other group of protesters unless their life was threatened, and to avoid racial slurs and name-calling. He said their goal was to prevent any vandalism.

“We are Americans, we are patriots, and we will defend our home,” he told the crowd before they spread out along the sidewalk and the wall above it.

Across the street, in front of Rite-Aid, a group of Black Lives Matter protesters formed, carrying signs with messages, such as “Reform the police, convict the guilty.” They started out with their usual group of roughly 10 protesters, but at its peak the protest drew about 40 people.

Cassandra Frost, standing on the BLM side, said she had shown up to protest systemic racism. As a person of color, she spoke of her worries about the safety of her children in America because of the color of their skin. She said she wished people could see the “bigger picture” and work together to make their community better despite their disagreements. She also took issue with a passer-by who said she didn’t support America or the troops.

“My brother and my whole family are in the military, and none of them fought for this,” she said, gesturing to the people yelling insults at each other across the busy road.

Other protesters said they were there to be a voice for oppressed people, or to promote justice through needed policing reforms.

On the counter-protester side of the street, Brian Fisher said he was there because he wanted to show support for law enforcement and the military, where he served for seven years.

“I believe everyone matters,” he said. “Especially in the military, in a situation like that, you’re closer than brothers and sisters. It doesn’t matter what race, sex or creed you are.”

Nearby, Terina Newton said she felt that putting a specific race in front of the words “lives matter” was racist in itself, but said she still supported people’s rights to a peaceful protest. But she said many people were “heartbroken” about what they were seeing with protests in Portland and had shown up Aug. 21 to make sure there was no vandalism in Hermiston from any visiting Antifa or BLM supporters.

“Peaceful protests are great. They’re awesome,” she said. “That’s what America is all about. But when it gets violent, that’s a problem.”

Across the street, Andref Zavala stood with the BLM group after seeing the protest on the way to a friend’s birthday party and deciding to stop.

He said he had the same message as others surrounding him — that the only way all lives matter is if Black lives matter too.

“I’m mostly proud of this town,” he said partway through the protest. “Even though there are more people on that side, the people on this side are staying strong and holding their dignity.”

The protest was often a cacophony of sounds that were hard to make out, as protesters on both sides of the street shouted conflicting chants, aided by megaphones, while the four lanes of traffic in between them honked and yelled their support for one side or the other.

At times, individual protesters or small groups crossed the street to confront the other side — most often counter-protesters visiting the BLM side — and those street crossings sometimes sparked close-up yelling matches that ended with both parties’ friends dragging them in opposite directions while telling them to keep things peaceful. Those altercations — as well as the number of insults and profanities being yelled across the street — increased after the sun went down.

At one point a BLM protester threw a rock at a truck, at another point someone in a passing truck threw a glass bottle at the BLM protesters, which shattered on the road.

Pickup trucks — often sporting Trump 2020 flags — frequently doused BLM protesters in a cloud of black smoke as the other side of the street cheered.

Police circled the block or parked across Highland Avenue near the 7-Eleven at times throughout the night, and stepped in a few times when protesters began to confront each other. The number of officers dwindled for a while, and Edmiston said that was because he had to send some officers home after their shift stretched into the 16-hour mark.

“That’s a decision we had to make based on staffing,” he said. “People working 16 hours or more starts to get dangerous.”

He said police made 11 traffic stops on the evening of Aug. 21 and 13 on Aug. 22 relating to vehicles passing the protests, and arrested one 19-year-old male for reckless driving after he flipped a U-turn in the middle of the highway to confront the BLM protesters.

While BLM protesters complained that police weren’t pulling over trucks that were “rolling coal” past them by purposely shooting clouds of black diesel smoke in their faces, Edmiston said on the evening of Aug. 22, with better staffing and more preparation, police were able to pull over vehicles that were rolling coal, revving their engines or creating other infractions.

He characterized the Aug. 22 protest as a calmer affair, with fewer people and no megaphones.

During the Hermiston City Council’s meeting on Monday, Aug. 24, councilors thanked the police department for its work in helping keep the protests peaceful. Mayor David Drotzmann also thanked the leaders of both sides of the gatherings from working to keep things from going “sideways” as tensions ran high.

“It takes leadership to make that happen,” he said.