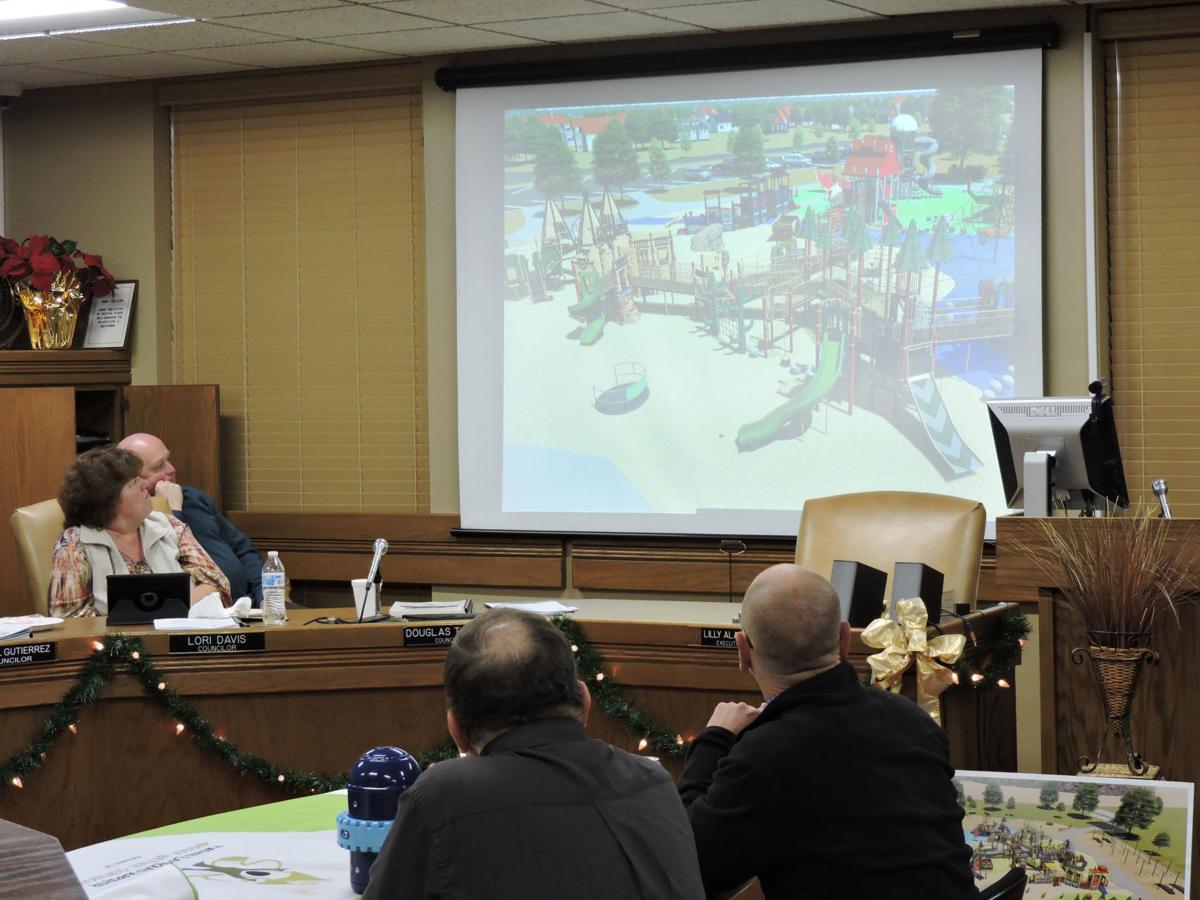 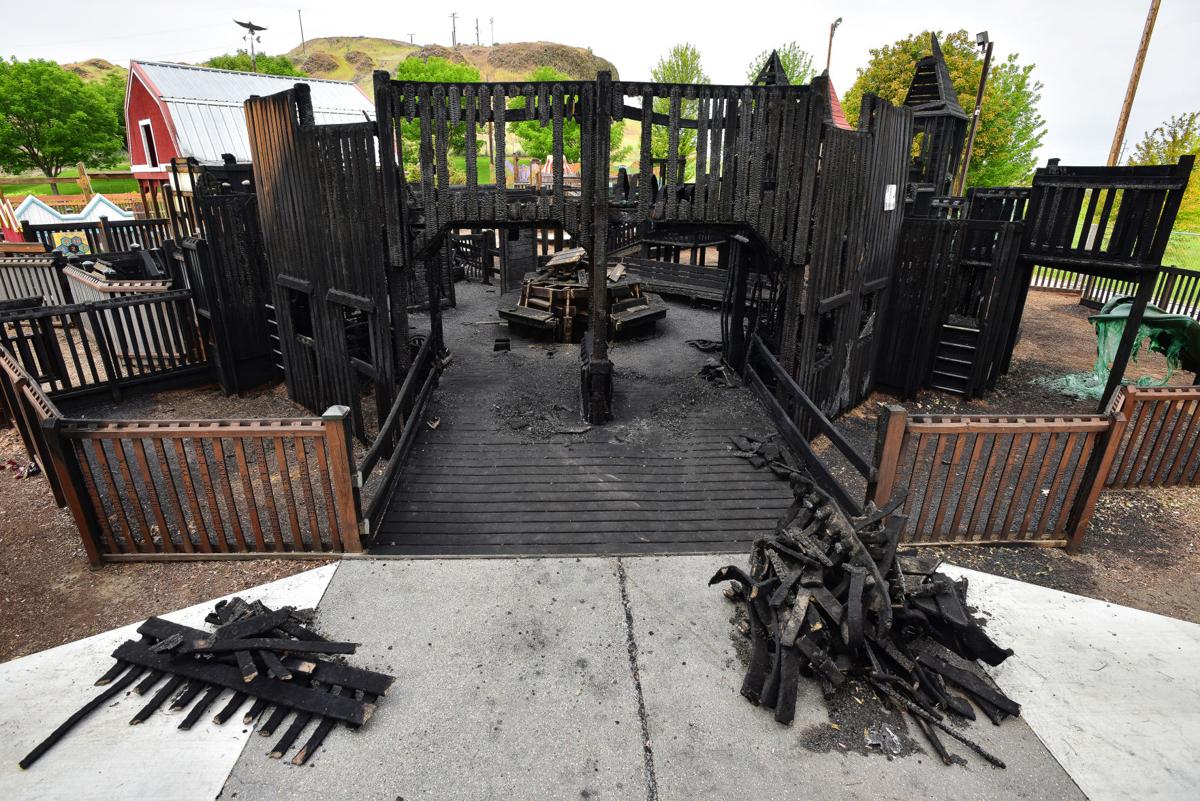 Charred portions of the Funland play structure at Butte Park in Hermiston await demolition after an early-morning fire in May 2019. Plans for a new Funland playground were presented Monday.

Charred portions of the Funland play structure at Butte Park in Hermiston await demolition after an early-morning fire in May 2019. Plans for a new Funland playground were presented Monday.

A citizen committee will try to fundraise as much as $810,000 from the community in order to rebuild the Funland playground “bigger, better and stronger” after it burned down in May.

The goal is ambitious, but Hermiston Mayor David Drotzmann praised the group for dreaming big.

“This community has a rich history of doing things better than average, better than they’ve been done before,” he said.

The city currently has $752,000 in hand from an insurance settlement and some initial donations that trickled in unsolicited after the fire. It’s enough to build a playground over bark chips, but the Funland Park Reconstruction Committee hopes to build a larger, more accessible and more durable playground with new features such as a restroom facility.

The largest cost of their vision — at $336,000 — would be replacing the previous wood chips under the structure with a spongy, wheelchair-friendly, fire-resistant material made from recycled tires.

“The wood chips at the bottom of the swings and slides were displaced constantly,” parks and recreation director Larry Fetter said, noting new wood chips would only cost about $20,000 upfront but need to be replaced frequently.

The structure itself will be built from materials less flammable than wood, such as a compressed plastic made from recycled milk jugs that has become popular for new playgrounds. It will be designed to reduce the number of hiding spots for people up to no good, and will have an upgraded security camera system.

The tentative design the committee presented Monday would be broken up into three main thematic sections, plus a 16-foot-tall structure in the center and a separate area for swings.

The centerpiece of the adventure section is a large pirate ship where children can pretend to battle a mythological kraken coming out of the “water.”

In the agricultural section, slides lead down from a tall grain silo, while children can climb on a tractor or giant fruits and vegetables.

In the western section, a large locomotive gives a nod to the railroad that helped bring Hermiston into existence, while Western storefronts can be customized to reflect what Hermiston’s early downtown looked like. The section will also include a Native American campsite with teepees, a “fire pit” and drums.

Fetter said he consulted with cultural specialists for the Confederated Tribes of the Umatilla Indian Reservation on the American Indian section, and they made suggestions to make the section more authentic to area tribes.

“We introduced a climbing rock with petroglyphs that might actually be found in the Columbia Gorge,” he said.

Multiple city councilors said they wanted to do more than just ask the tribes for suggestions to improve the design. If the tribes aren’t 100% on board with something, councilor John Kirwan said, the city shouldn’t include it.

“Any time you have a cultural element, you need to get their permission,” he said.

Drotzmann agreed, saying that he hoped the playground stands for generations to come, and therefore he wouldn’t want anything the tribes weren’t “completely comfortable” with.

“They gave us a tour (Tamástslikt Cultural Institute) and there’s so much detail and so much quality and so much thought in that, it’s so easy to get wrong, so I hear you loud and clear,” Fetter responded.

Councilor Roy Barron said he appreciated the effort to include the tribes, but he was disappointed there wasn’t more to represent Latino cultures. Fetter told Barron he would love to take suggestions on colors or other design elements that would help the playground feel more inclusive for Latino children, who will likely make up the majority of children using the playground.

The final tally of how much the rebuild committee’s full vision would cost came to $1,562,000 (an estimate last week placed it at $1.2 million). Fetter said the city could downgrade or hold off on some elements if they weren’t able to fundraise as much as hoped.

While Fetter asked for the council to sign off on the design as presented, in order to complete construction by the city’s July 4 celebration at Butte Park, councilors said they would feel more comfortable fundraising first and then approving a design after they see how much came in. Fetter said that would likely push the completion date back to Labor Day, but councilors said they felt it would be worth the wait to do such an important project right.

Two committee members, Charlie Clupny and Patricia Alder, told the council a lot of thought was put into the design and they hoped that enough money would be able to be raised to bring that vision to life. Clupny said when he talked to the Lions Club, they were excited to talk about how the club could help.

“I just shared three pictures and by the end of the hour they were like, ‘When are we going to start building?’” he said.

A new committee will be put together to begin fundraising in earnest and publicizing the vision for the playground. Efforts will include the sale of fence pickets that community members can engrave, and corporate sponsorships of pieces such as the giant watermelon slice.

“You and your committee have the council’s blessing, now go forth and make it happen,” Drotzmann said.