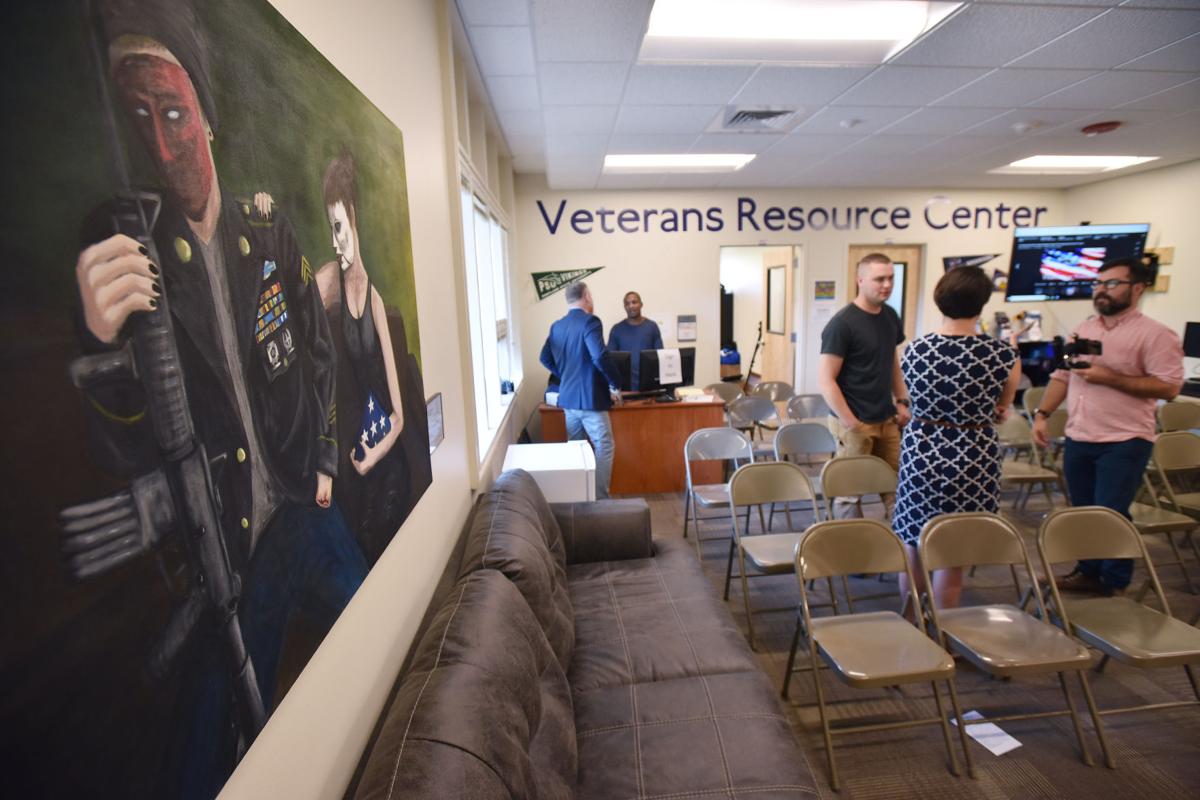 An art piece entited “22 is 22 Too Many” by veteran artist Jacob Gunnels hangs in the new BMCC Veterans Resource Center on Wednesday in Pendleton. 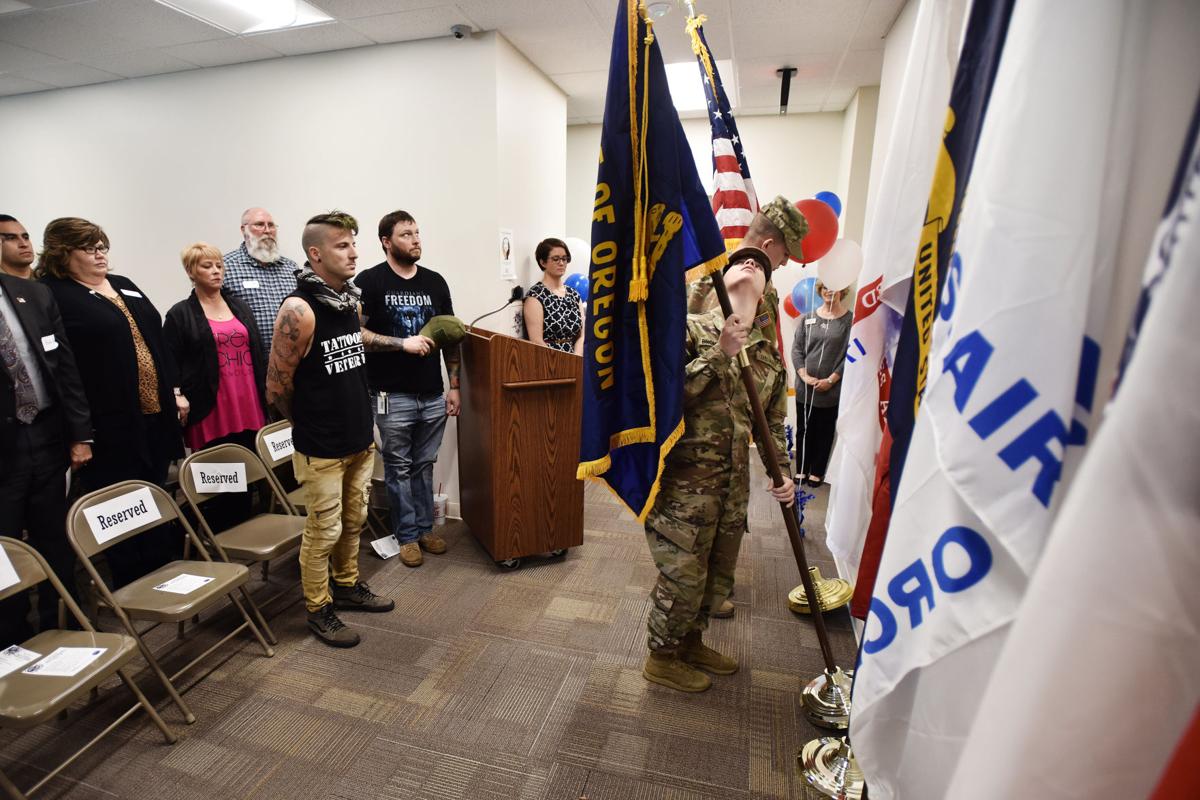 Oregon National Guard Spc. Ammare Broncheau looks up while placing the Oregon flag in a stand as Spc. Zachariah Kellogg does the same with the U.S. Flag during a grand opening for the BMCC Veterans Resource Center on Wednesday in Pendleton. 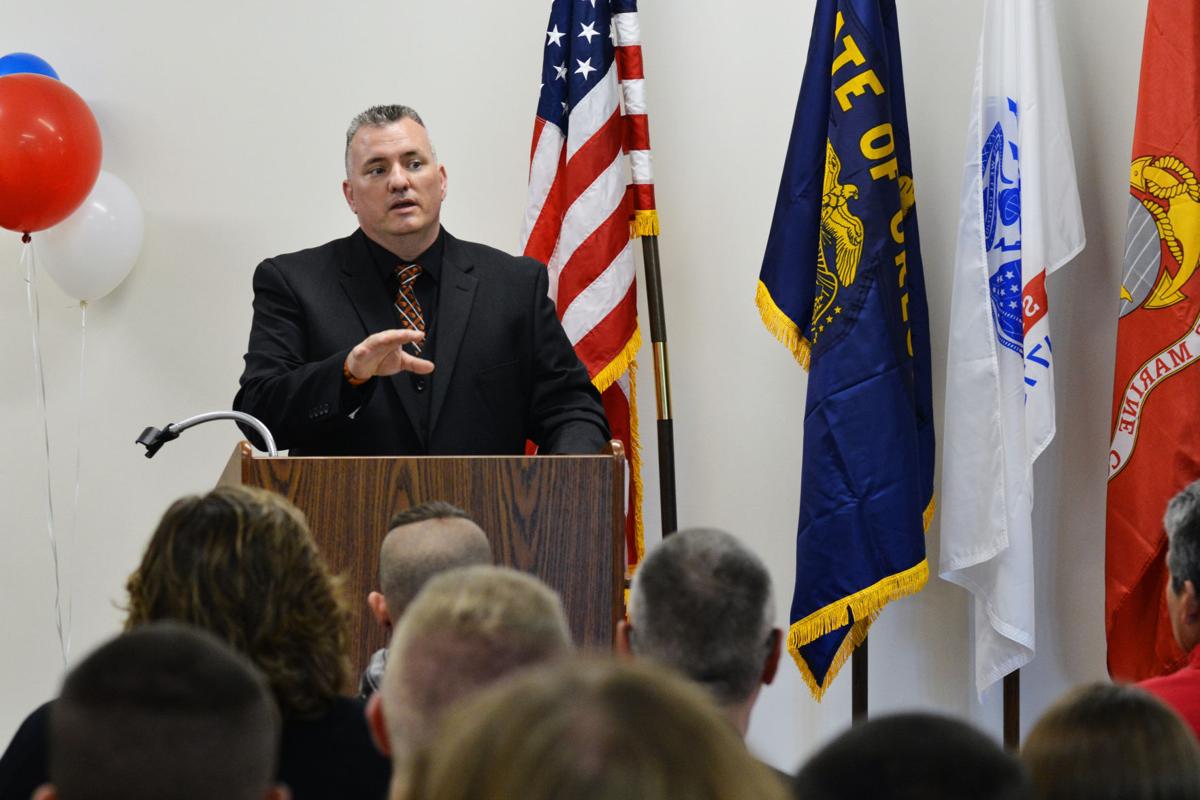 Gus Bedwell, veterans specialist with the Oregon Housing Authority, speaks during a grand opening for the BMCC Veterans Resource Center on Wednesday in Pendleton.

An art piece entited “22 is 22 Too Many” by veteran artist Jacob Gunnels hangs in the new BMCC Veterans Resource Center on Wednesday in Pendleton.

Oregon National Guard Spc. Ammare Broncheau looks up while placing the Oregon flag in a stand as Spc. Zachariah Kellogg does the same with the U.S. Flag during a grand opening for the BMCC Veterans Resource Center on Wednesday in Pendleton.

Gus Bedwell, veterans specialist with the Oregon Housing Authority, speaks during a grand opening for the BMCC Veterans Resource Center on Wednesday in Pendleton.

Without looking at the name, the Blue Mountain Community College Veterans Resource Center would look like a lot of study spaces at the college’s Pendleton campus.

The room includes some desktop computers, a pair of couches, a mini-fridge, and a couple of offices. But a key signifier of the veterans center’s intent is represented by a picture hung on the wall — a painting made by Jacob Gunnels, a BMCC alum and a veteran.

BMCC officials unveiled the painting as a part of the center’s grand opening Tuesday, an event that featured speakers from BMCC and various veterans organizations.

Between the suits and business casual dress that defined the administrators and the uniformed personnel from the Oregon National Guard, Gunnels’ black sleeveless shirt that read “Tatooed Veteran” and his streak of green hair stood out.

His painting was similarly eye-catching: a man in a red mask and an Army jacket holding a large gun, comforted by a woman in a white mask.

In a caption that accompanies the painting, Gunnels said he’s the man in the red mask, which represents “blood,” “anger,” and “pain.”

“She wears a white one representing purity and light in the darkness,” the caption reads. “I am facing the darkness, but she is there to pull me back, the light, the strength. But in the end she leaves, the burden is too much. All the weight falls back on me.”

The title of the painting is “22 is 22 Too Many,” a reference to U.S. Department of Veterans Affairs study that found that 22 veterans die of suicide per day.

An Army veteran who served tours in Iraq, Bosnia, and Haiti, Gunnels said many people didn’t get the painting when he first made it as an art student at Eastern Oregon University.

But when he posted the painting on Facebook, all of his veteran friends instantly connected with its themes.

Installing the painting at the veterans center seemed like the right move.

“With the audience for my work so small, it’s great that it’s in a place where it can be appreciated,” he said.

Roman Olivera, the director of BMCC’s student support services program, said a veterans advisory committee worked on the project for the past five years.

Olivera said he personally drove 1,200 miles across the state to visit other veterans centers and figure out their best practices.

Thanks to a $50,500 grant from the state, BMCC was able to open the center this year, which features mentoring and tutoring resources in addition to being a space where veterans can meet and socialize.

According to many of the speakers, transitioning from the military to college life can be an isolating experience.

Stephen Jensen, a peer mentor at the center and a 2018 BMCC graduate, said that if the college had a veterans center when he was in school, he might have spent less time studying in his car in the parking lot.

“I didn’t care where the parties were going on this weekend,” he said. “I just wanted to study and get my degree.”

Like Jensen, Glenn Scott, a Umatilla County veterans services officer, remembers feeling out of place when he began studying at a community college in Modesto, California.

“Gee whiz, what are all these kids doing here?” he recalled thinking at the time. “Where did they come from?”

Gus Bedwell, a veteran specialist for the Oregon Housing Authority, encouraged people in the room to spread the word about the center because many veterans needed its “wraparound services.”

Bedwell referenced a study from the Wisconsin HOPE Lab, which found that 37 percent of veteran college students reported housing insecurity while another 11 percent were homeless. Both figures were above the overall student average.

Gunnels hopes to one day contribute toward projects like the veterans center.

He recently graduated from EOU with a bachelor’s degree in art and intends to start a master’s degree program in social work at Walla Walla University with the intention of getting into veterans services.