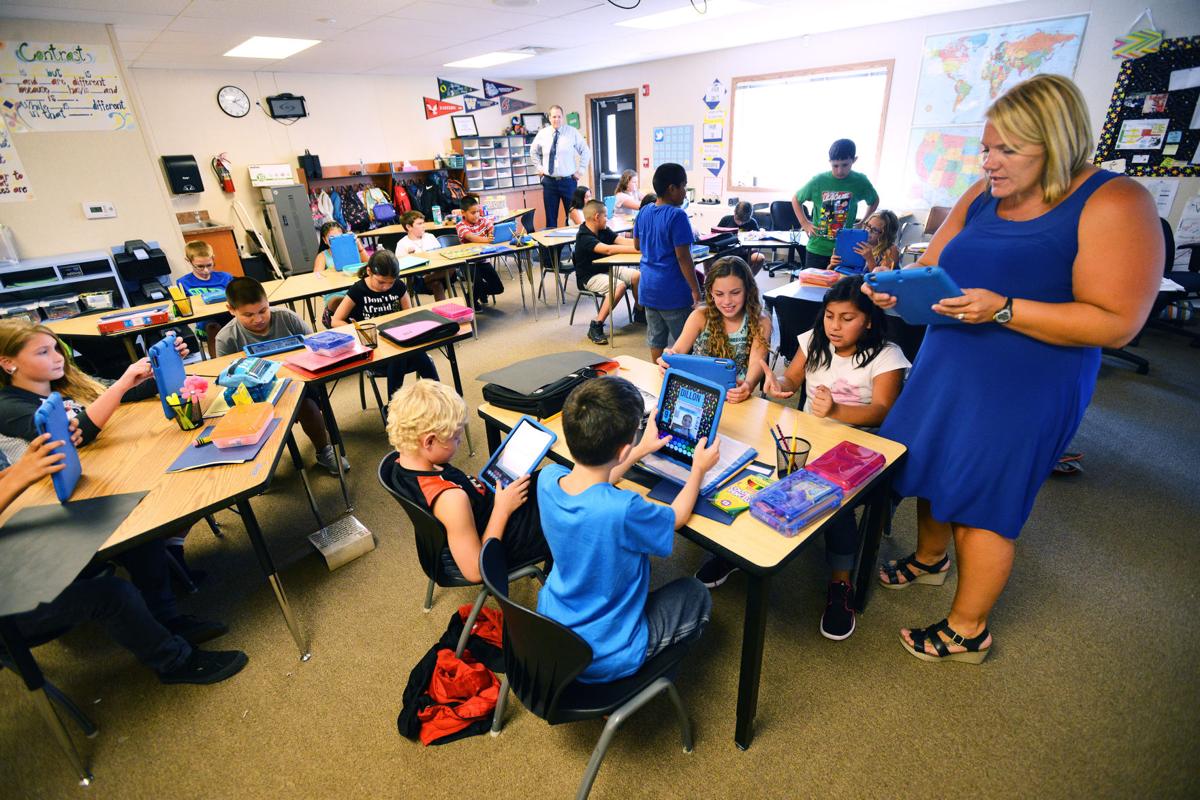 Fifth-grade teacher Daylee Lathim helps a student navigate a tablet while teaching in one of the modular classroom units on the first day of the 2016 school year at Rocky Heights Elementary School. 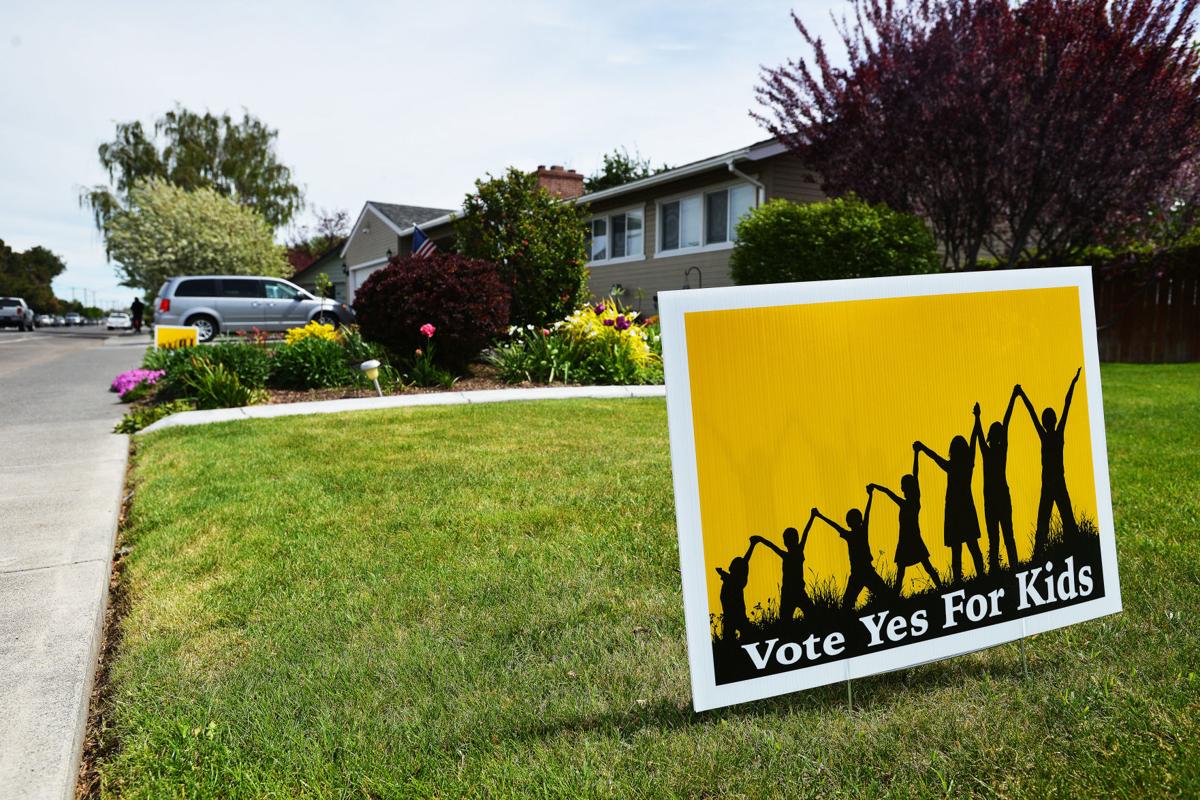 Signs supporting the schools bond measure were prevalent in Hermiston during the campaign. 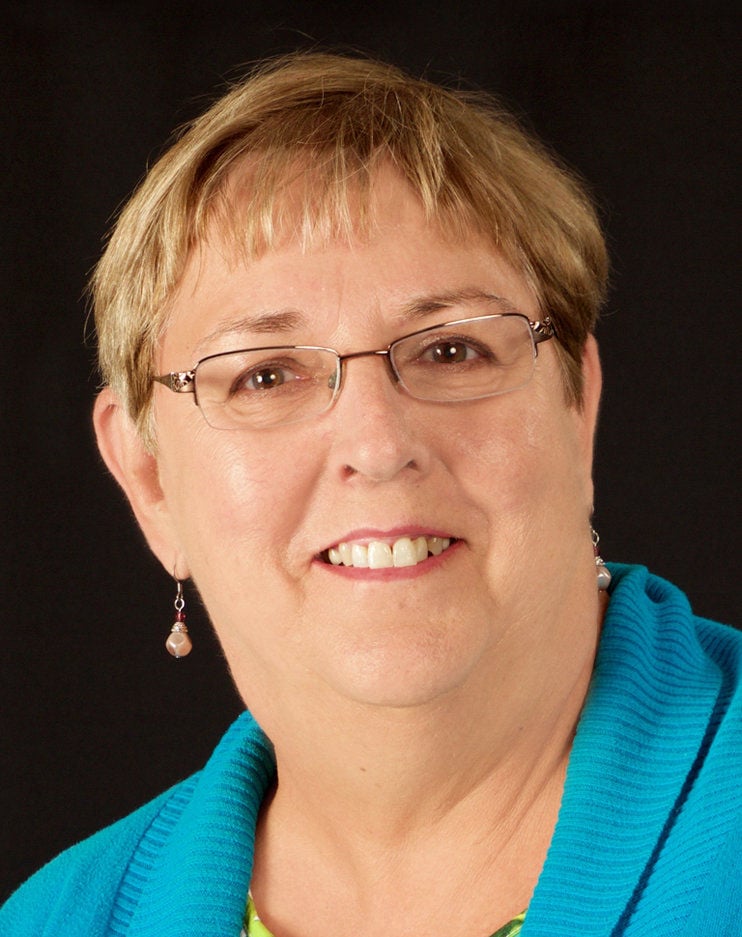 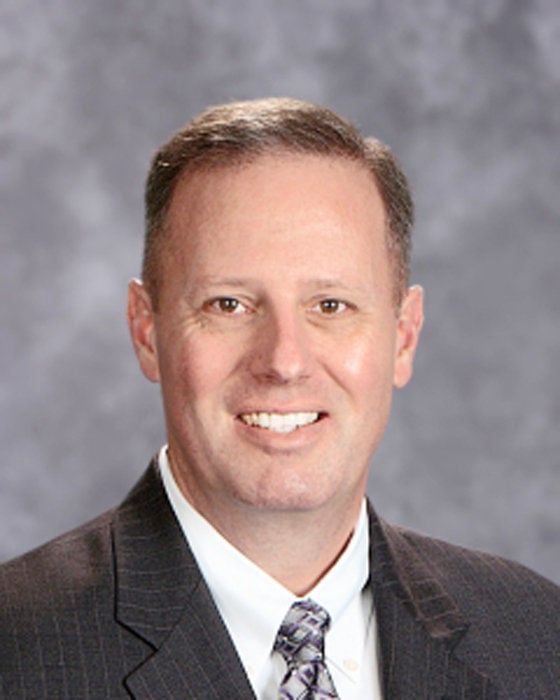 Fifth-grade teacher Daylee Lathim helps a student navigate a tablet while teaching in one of the modular classroom units on the first day of the 2016 school year at Rocky Heights Elementary School.

Signs supporting the schools bond measure were prevalent in Hermiston during the campaign.

Hermiston School Board looks at reasons for bond failure, how to move forward

The Hermiston School District’s $104 million bond failed decisively in last week’s election, prompting questions from district employees, board members and the community: why did it fail, and what’s next for the schools?

All told 3,950 people cast their votes on the bond, with 640 more votes (58 percent) going against the bond than in favor. County-wide, voter turnout was low, with only about 26 percent of eligible voters submitting ballots.

The bond’s failure was a departure from Hermiston’s history of passing school bonds. Since the mid-1990s, the community has passed four school-related bonds to address a growing student population. The most recent bond passage was in 2008, when the board rebuilt Sunset and West Park elementary schools, and Armand Larive Middle School.

On Monday, the Hermiston School Board met for the first time since the election to discuss the vote and its next steps.

Board members shared what they’d learned in the days since the failure of the bond, which proposed to replace Highland Hills and Rocky Heights elementary schools, upgrade the high school and build a new elementary school on East Theater Lane.

Many said they’d heard from people who couldn’t afford the tax increase on a fixed income, as well as those who wanted to see the district try to upgrade the buildings they had instead of building a brand-new Highland Hills.

But others said they were surprised by the responses from community members. Multiple board members said they knew people who claimed they didn’t receive ballots. Several also said they heard comments from people who were more interested in seeing the high school developed than focusing on elementary schools.

Another common critique was from the senior citizen community, which was unhappy at having to move from their current senior center location once the school district purchased the property.

Karen Sherman, the board chair, said while it was a difficult transition, she felt some of the blame was unfairly placed on the schools.

“We took that into consideration,” she said. “We offered them the land by Armand Larive right up front. Unfortunately, the senior board and city have not been able to get the center built in a timely fashion. Here we are, looking like the people pushing them out, but I don’t feel we are totally responsible for that.”

“I think it comes down to community trust,” said board member Dave Smith. “I had people saying to me that we were asking for more than we really needed — and I took offense at that. I think we’ve tried to be transparent.”

Sherman said while it may not have been a direct reason, she also felt the city’s recent decision not to renew the Chamber of Commerce’s lease on the Hermiston Conference Center may have set a tone for people in the community.

“I think there’s some anxiousness about that,” Sherman said. “Hermiston has always been such a supportive place to live. Emotionally, that has been the hardest part of this week. I feel badly because our kids did not get the support they needed from this community.”

Many senior citizens at the Hermiston Senior Center lunch last week said they weren’t going to vote for a bond that raised the tax burden of people on fixed incomes.

“If they would have just put the repair of Rocky heights and Highland Hills on there, I probably would have voted for it,” said a woman named Chris, who asked that her last name not be used, echoing the comments of several others in the room. “But I’m not voting for a new school.”

Others added that they wanted to see the district put more effort into maintaining existing buildings, rather than continue to build.

Still others said they felt the influx of Hispanic families was contributing to the growing population of schools, but felt those populations weren’t paying their fair share of taxes, and wouldn’t help shoulder the resulting tax increase.

Some seniors also acknowledged the sting they’d felt at being told they had to leave their current location.

“It was harsh,” said Virginia Beebe, who doesn’t live in Hermiston but is active at the senior center. “They basically told us the building comes down no matter what.”

Parents at some of the schools that had been up for replacement said they were disappointed in the bond’s failure — but several said they didn’t vote, or failed to turn in their ballots on time.

But others said they were surprised by the outcome.

“I was so sad,” said Katie Anderson, a parent at Rocky Heights Elementary. “I think it was just the money.”

Liz Sharon, another parent at Rocky Heights, said the school is in great need of the proposed repairs.

Heather Beal, a parent at Rocky Heights, said most parents she knew supported the bond because they see the problems with the facilities on a daily basis.

Five months later the district returned with a similar set of questions and found the sentiment had shifted. When asked about the $104 million bond, 46 percent were in favor and 48 percent were against it, leaving just six percent unsure.

The school board on Monday talked about hiring a consultant for another round of community input as it moves forward.

While there is currently no timeline for when the issue of school construction will go back to the ballot, Sherman said she had already heard some suggestions — re-submitting the bond but not including Highland Hills, or just upgrading the existing buildings for safety issues.

“We need to revisit these again,” Sherman said.