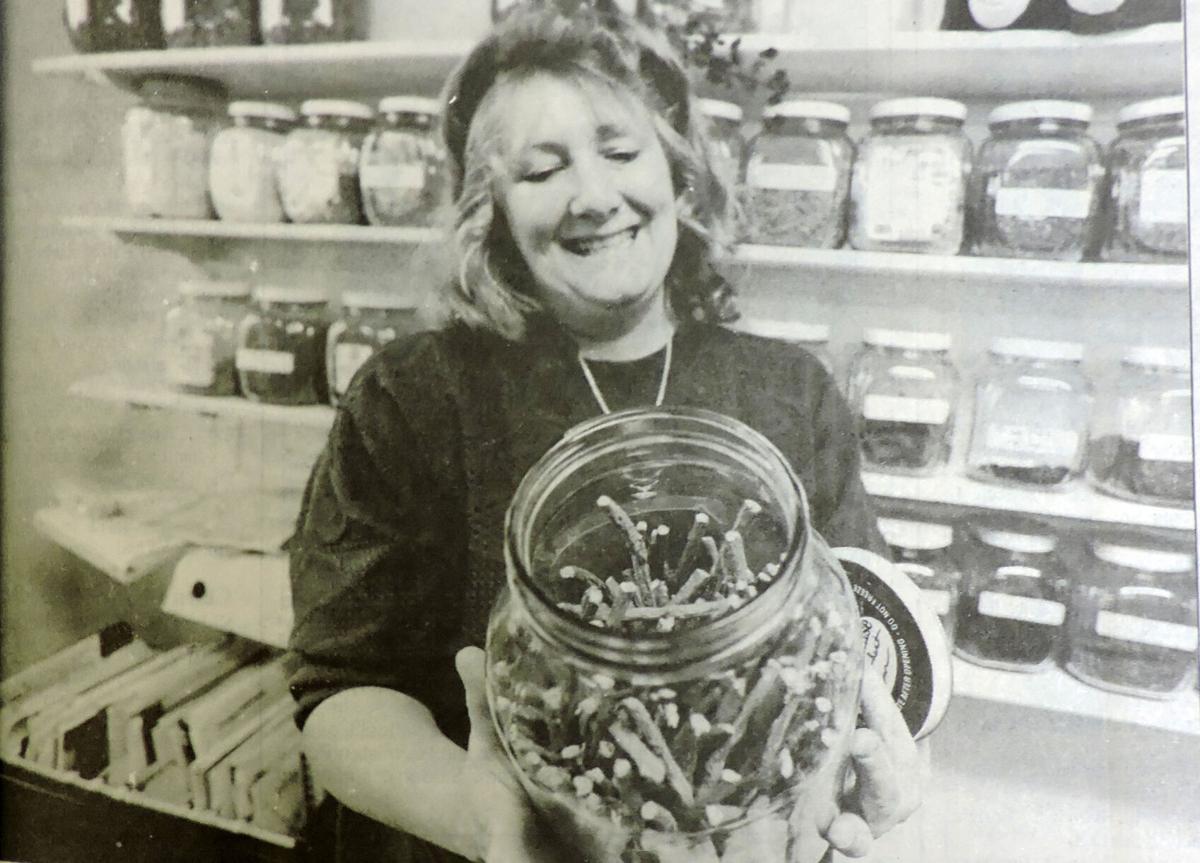 Dorece Winn, co-manager of the new health store Naturally Yours, shows off some “Chinese licorice sticks” in 1996. 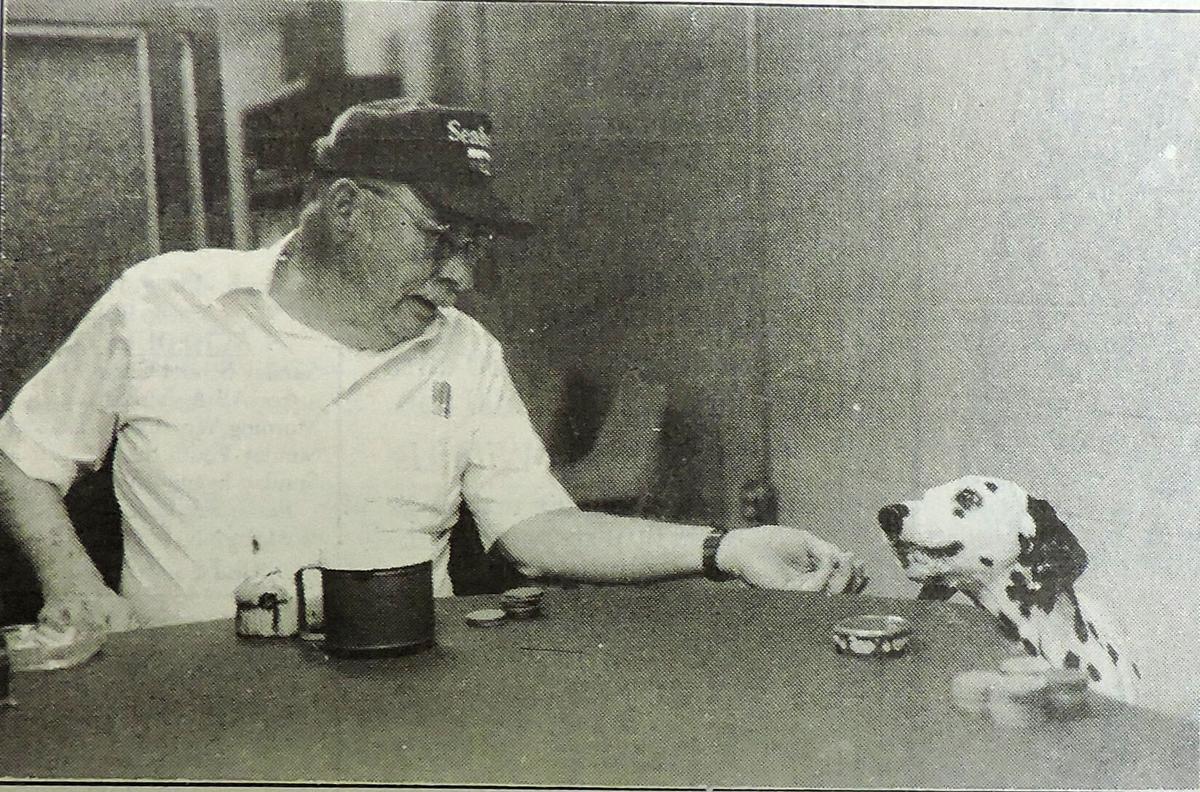 Lt. Dave Potter offers a tidbit of food to the Umatilla Fire District’s mascot, Lenny, a 2-year-old Dalmatian, during a poker game among the fire district’s leadership in 1996. 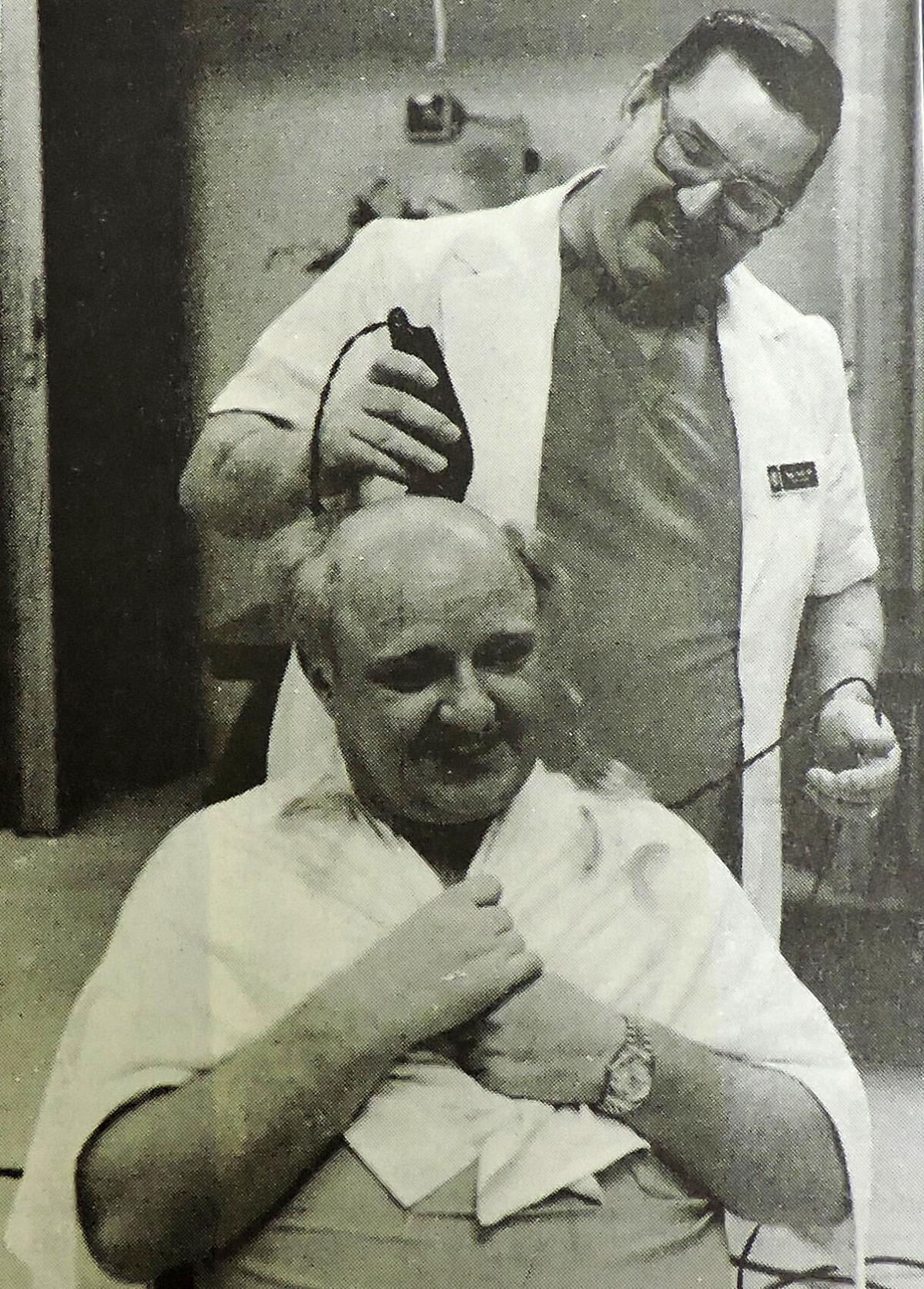 Larry Wright, respiratory therapy manager at Good Shepherd Community Hospital, gets his head shaved as a reward for hospital employees who exceeded their goal in raising money for charity in 1996.

Dorece Winn, co-manager of the new health store Naturally Yours, shows off some “Chinese licorice sticks” in 1996.

Lt. Dave Potter offers a tidbit of food to the Umatilla Fire District’s mascot, Lenny, a 2-year-old Dalmatian, during a poker game among the fire district’s leadership in 1996.

Larry Wright, respiratory therapy manager at Good Shepherd Community Hospital, gets his head shaved as a reward for hospital employees who exceeded their goal in raising money for charity in 1996.

An accidental release of nerve gas stored in Eastern Oregon could threaten residents up to 40 miles away, says a whistleblower who lost his job after warning of similar hazards at a Utah chemical weapons incinerator.

Authorities at the Umatilla Army Depot are unprepared to handle a leak of a deadly nerve agent called VX, said Steven Jones, a former civilian safety manager at the Tooele Army Depot in Utah.

Jones said emergency procedures at both depots are based on a possible leak of another nerve agent known as GB, or sarin.

A 40-mile radius would include Hermiston, population 10,330; Pendleton, home to 15,715 people; and the Umatilla Indian Reservation, where about 3,000 people live.

Most businesses were expected to surpass 1969 and did, and their managers tend to foresee continued success through the winter.

“We had a very good Christmas,” was the comment of Gib Gettman, owner of Hermiston Drug.

He said business improved at least 12% over the 1969 season. The last four shopping days he described as “very heavy.”

2) What used to be the Hermiston Chamber of Commerce changed its name Tuesday night.

It is now the Greater Hermiston Chamber of Commerce, so called because it serves the West End of Umatilla County and, in the case of some of its members, Morrow County.

Mr. and Mrs. Baker of Omaha, Nebraska, filed on the first desert claim here in 1902 and, in 1906, established the Hermiston Herald. They jointly published the Hermiston Herald until 1910 when they sold their interests. Mrs. Baker was a charter member of the library board when it was instituted and also a charter member of the Women’s Community Club.

2) Patrons of the Hermiston post office are having a time these days getting their mail. Since the office has been in the new building — last Friday and Saturday being the moving days — renters of new boxes have been trying to remember new combinations and some of them have three numbers. Employees of the post office are having troubles to no end in teaching the new combinations and getting the equipment in place, but they are glad to assert they will get the patrons to open the new boxes in due time.

Last Monday morning at about 7:30, fire was discovered in the roof of the Inland Empire Lumber Company’s office near the depot. The alarm was sounded and the fire company responded in quick time. Notwithstanding the fact that a high wind was blowing, the fire was put out in a hurry, and good work done by the fire laddies.

Had the blaze got a good start with the high wind to fan it along, there might have been a blaze that would have caused considerable trouble. The loss to the lumber company is between $400 and $500, all covered with insurance. The cause of the fire was declared to have been an overheated stove.

2) The afternoon bridge club held its first meeting in the new year at the home of Mrs. Harry Straw on Tuesday afternoon with Mrs. H.M. Gunn and Mrs. Charles Baker as assistant hostesses. Evergreen trees, Christmas bells and the Yule log burning in the big fireplace filled the pleasant rooms with an air of holiday cheer.

Auction bridge was played at six tables which were prettily arranged for tea and five o’clock. Ye old fashioned plum pudding topped with a lighted birthday candle made an appetizing celebration for the birthday of the new year.