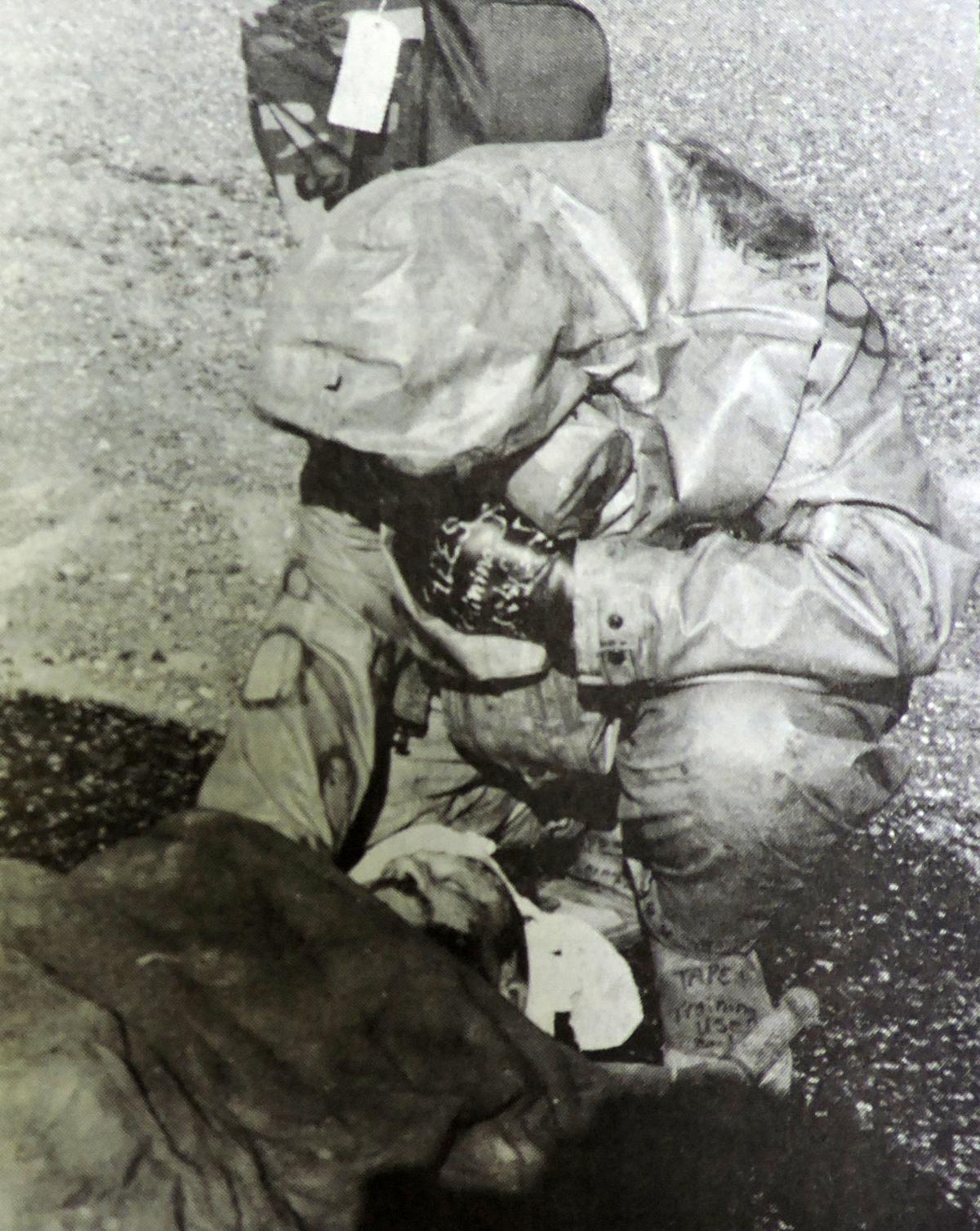 An emergency technician works on a fake explosion victim during a drill at the Umatilla Chemical Depot in 1995. 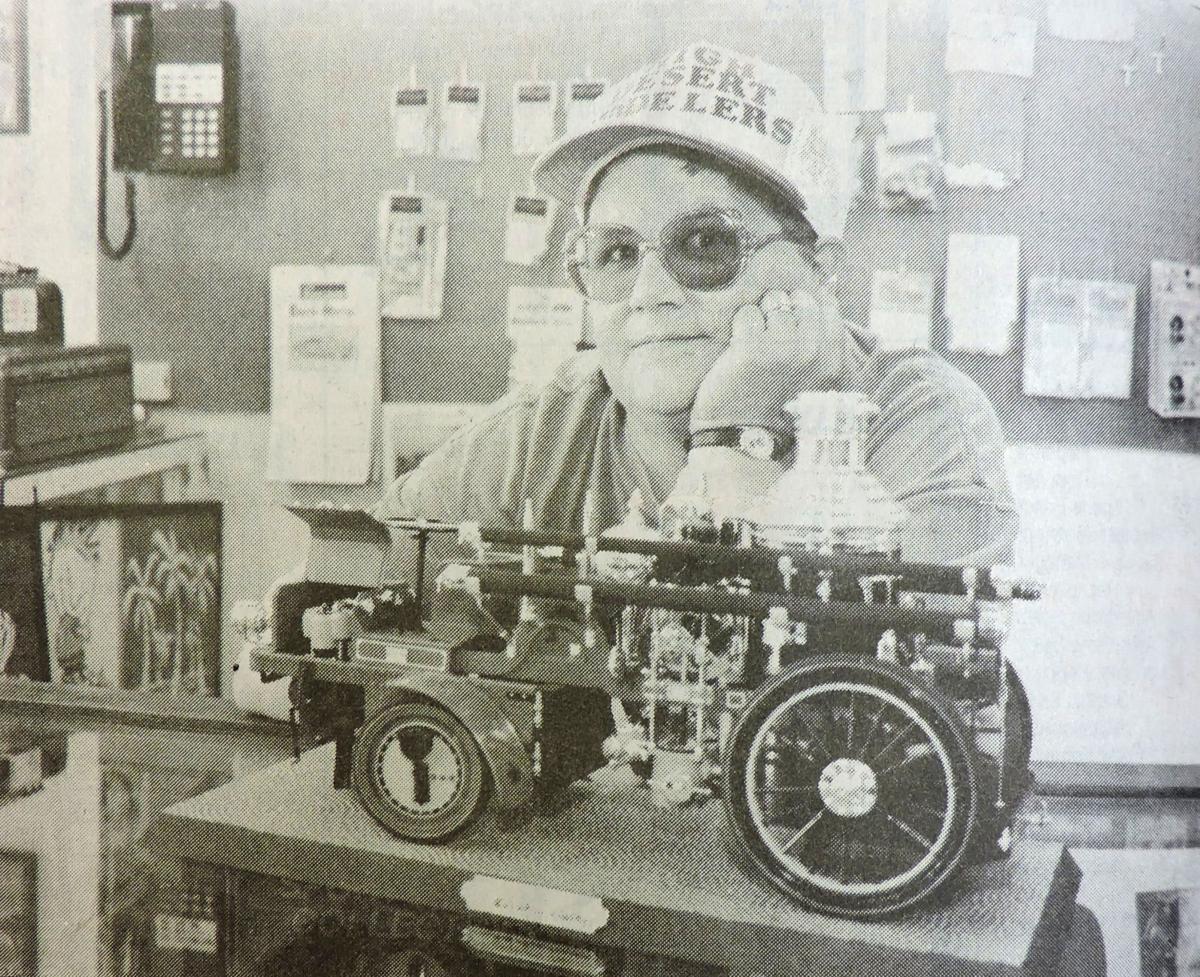 Kristin Finley of the High Desert Modelers shows off her model 1911 fire truck in 1995.

An emergency technician works on a fake explosion victim during a drill at the Umatilla Chemical Depot in 1995.

Kristin Finley of the High Desert Modelers shows off her model 1911 fire truck in 1995.

By next March, those spending the night in Hermiston will have one more hotel from which to choose.

Richard and his wife Marcella will manage the hotel.

2) With 39 years in education — 17 of them in Umatilla — George Fenton is ready to retire.

The Umatilla superintendent decided last year that this would be his last.

“It’s time,” he said. “I’ve worked all my life. I’ve been working since I was six. There hasn’t been a Monday morning since where I didn’t get up and go to work someplace.”

What Hermiston School District’s policy will be regarding speakers in the schools will be decided in the near future, the school board decided Monday night.

A committee was appointed to study the problem and find out what some other schools are doing about the question that arose here when Dr. Arthur Pearl, Democratic candidate for governor, was first approved and then denied an opportunity to speak at the high school.

School superintendent A.O. Larive had asked the board to come up with a policy regarding persons who are running for political office. Should they be allowed to speak to students in class or in a general assembly?

Larive said, “We teach our students about free speech and free press and they then see a minor militant group of persons deny this constitutional freedom to a speaker whose views may differ from theirs.”

When questioned by members of the school board as to how the change of mind had come about, Larive said that he had on Wednesday night received four phone calls objecting to Pearl’s speech. One person, he said, claimed to represent 10 to 12 people. Principal Jack Jenkins told the board he had received two phone calls on Wednesday prior to the cancellation of the talk.

Larive said that “some who called actually threatened bodily harm.”

Ranger Vern E. Daughtery, T/5, who spent a number of months in a German prison camp, arrived home Thursday morning from Portland. He called Wednesday and really surprised local people and his parents as well, who did not know he had left Europe.

Vern served in a motor transport outfit when he entered service in 1942 but found that work too easy and asked for a transfer to the rough and tough Rangers. He was taken prisoner early in the Italian campaign.

2) Col. Ralph Tudor of Portland, head of the U.S. Army engineers, was in Hermiston last Friday afternoon to hold a meeting with local interested people in regard to requirements of this section during construction of the proposed Umatilla Rapids dam.

Actual construction work is planned to start about six months after the war ends, which may come in a year or 18 months, bringing the start of the dam about two years hence. Probably 3,600 men will be employed during the construction and that figure would bring about 10,000 people into this area throughout the 4-year construction period.

Increased housing facilities as well as business and industrial requirements were stressed in Col. Tudor’s impromptu remarks, which would indicate a boom in Hermiston within the next five years.

We are informed through C. Brockman, district manager of the Standard Oil Company in Stanfield, that the company now has on hand only four days’ supply of gasoline under normal consumption. Mr. Brockman has been assured by his company officials that he will not be able to get another car of gasoline for two weeks at least. This means we will be out of gasoline in very few days, unless every means is used to conserve the present supply.

Pendleton and Walla Walla are entirely out of gasoline and Pendleton tried to get some from Mr. Brockman but he refused to let them have any. The local garages have been requested to see that no car drives away from their stations with more than five gallons.

We are asking your whole-hearted cooperation to use every means to preserve our present supply.