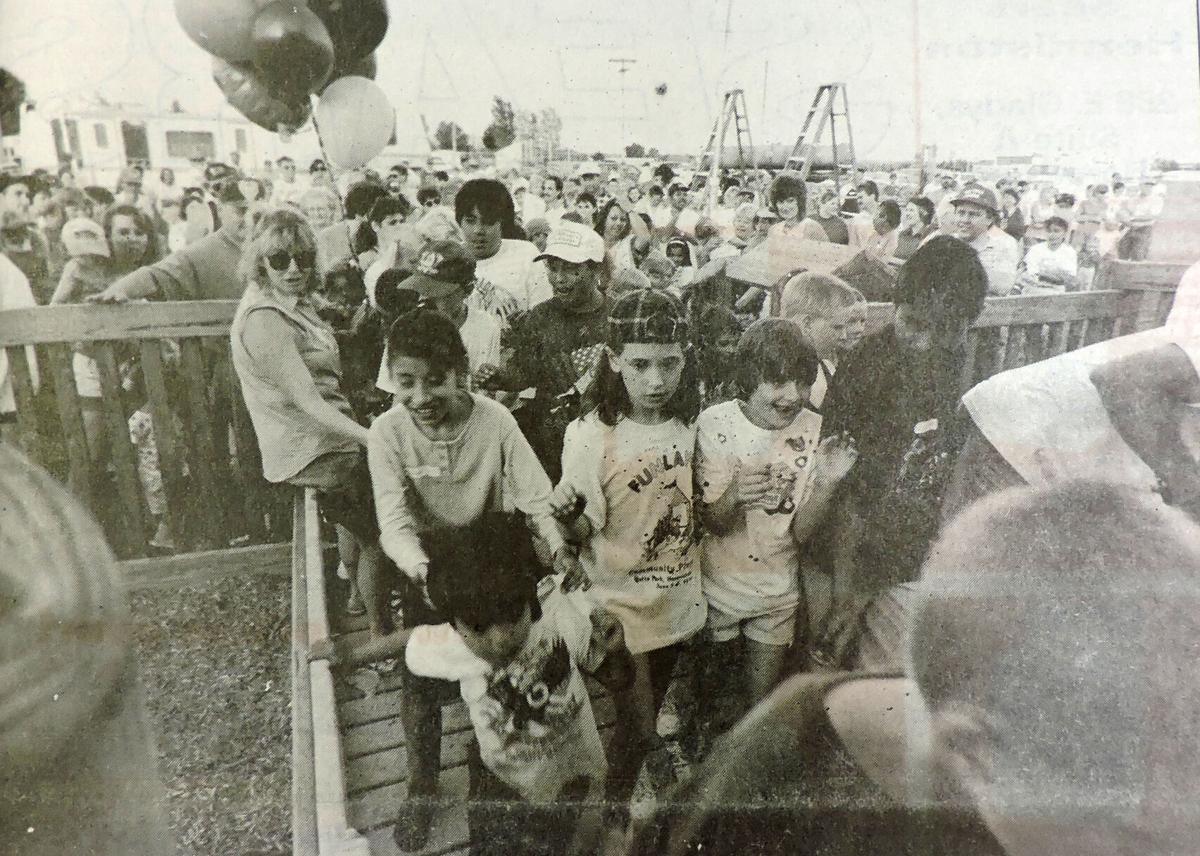 Children rush into the original Funland Playground during its grand opening on June 9, 1996. 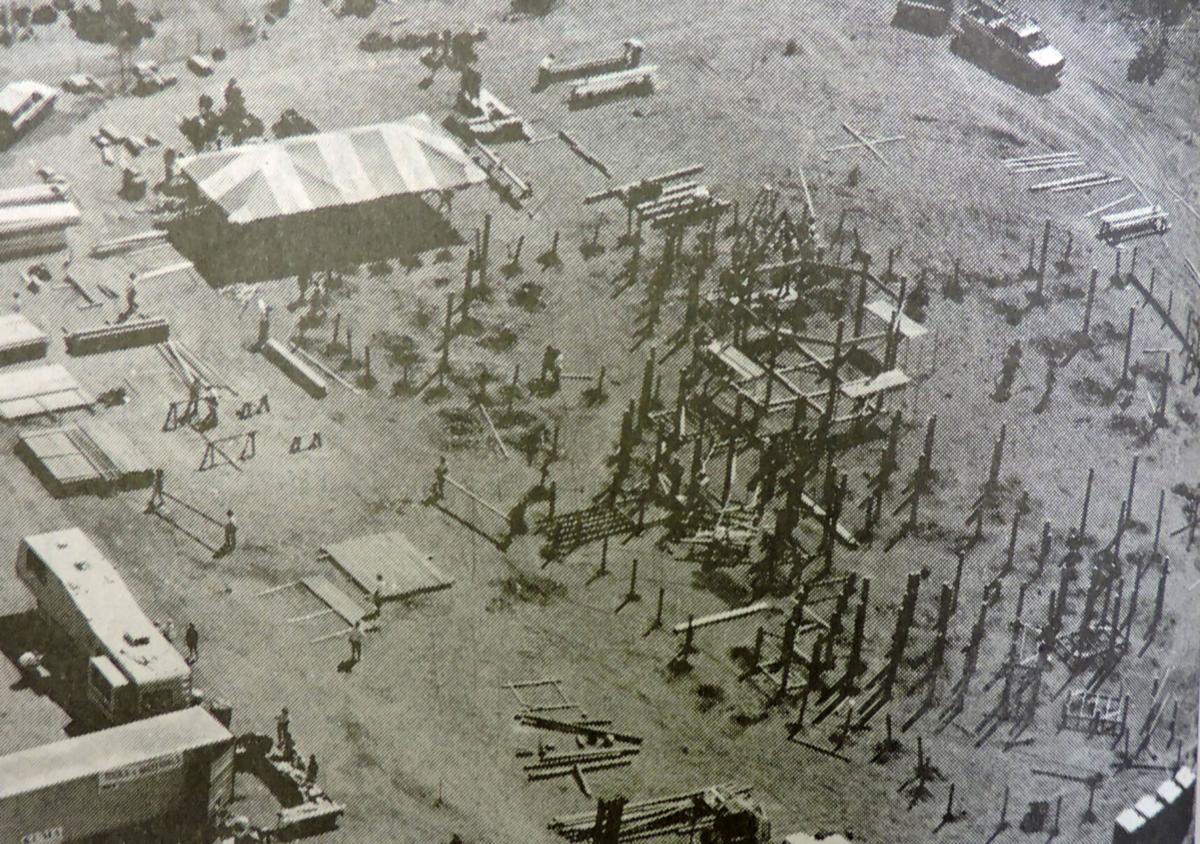 An aerial view shows the initial stages of construction of the original Funland Playground in 1996. 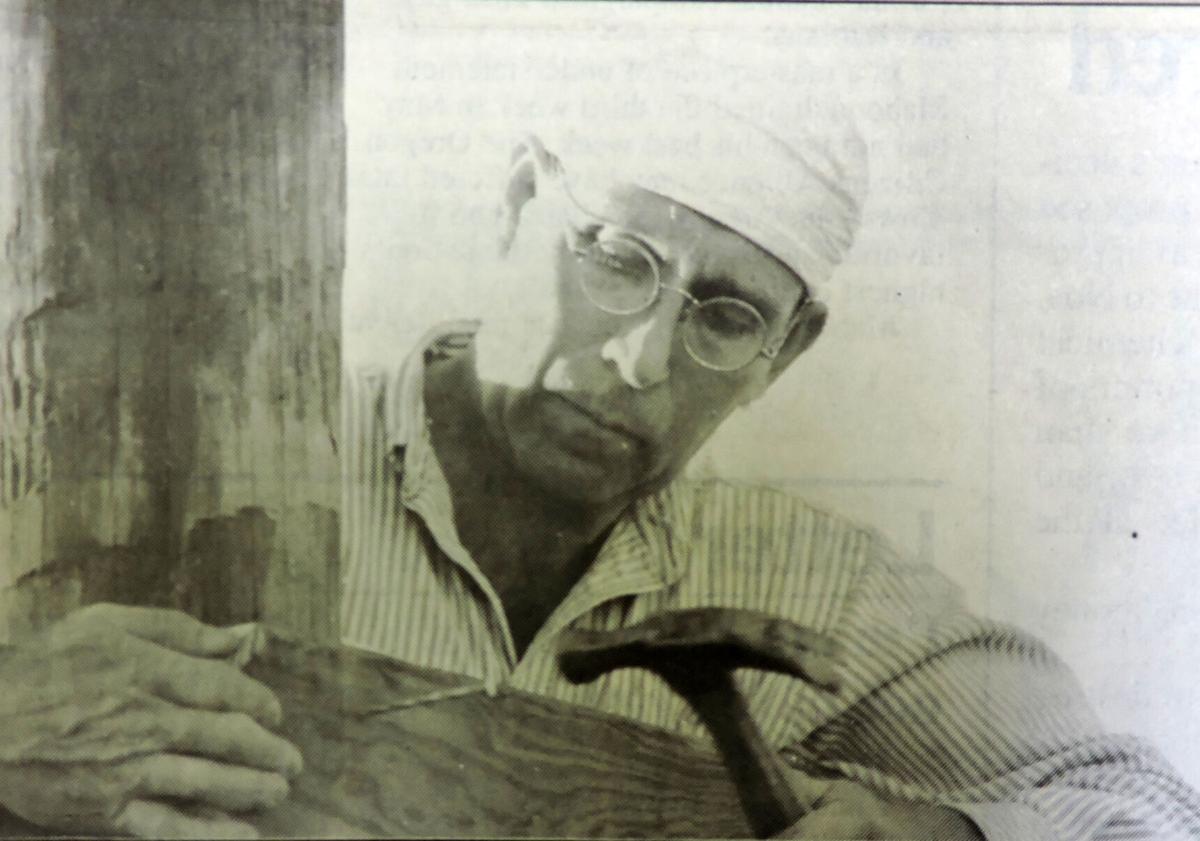 Kim Puzey works on constructing the original Funland Playground in 1996. 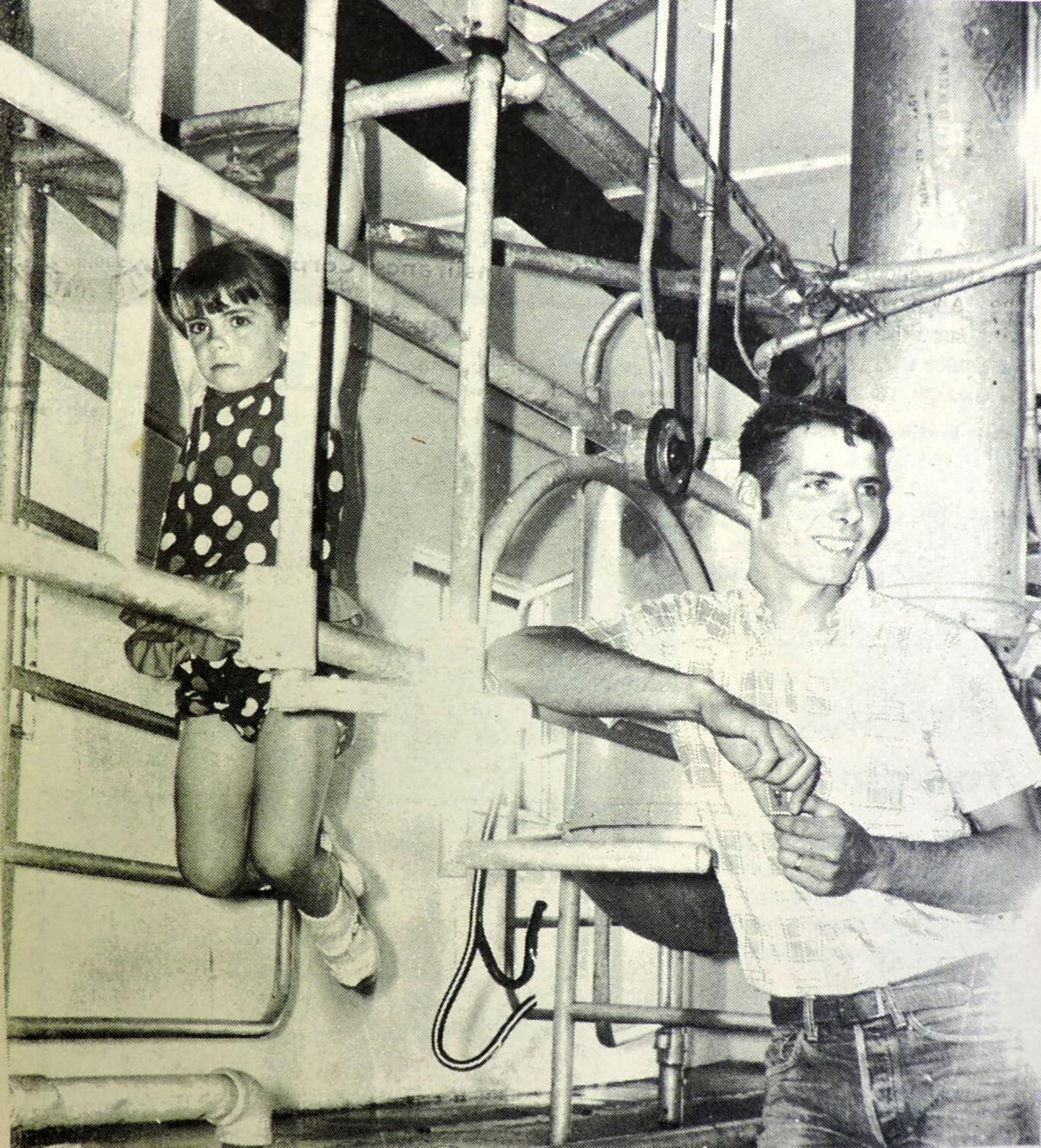 Jody Thompson, 5, swings from pipes at the Thompson dairy farm in 1971.

Children rush into the original Funland Playground during its grand opening on June 9, 1996.

An aerial view shows the initial stages of construction of the original Funland Playground in 1996.

Kim Puzey works on constructing the original Funland Playground in 1996.

Jody Thompson, 5, swings from pipes at the Thompson dairy farm in 1971.

Under the glow of the sun setting behind the Hermiston Butte, a horde of small children grew restless.

“We want in. We want in,” they chanted as the crowd swayed forward and back. A narrow opening in the low, wooden fence lay directly ahead of them but their path was blocked by adults and a paper chain.

It was nearly 8:30 p.m. on the final day and they had worked for nearly a year to get to this point. Now, they just wanted to play.

“There’s so many people we have to thank for this,” Barry Trapp said into a microphone.

Some of the children groaned, knowing what would come next would be a long “thank you” session.

“But if we thanked them all by name we’d be here until sunup,” Trapp said mercifully.

Minutes later, after all of the leaders and coordinators had been recognized, co-coordinators Trapp and Kathy Blankenship let open the flood gates.

In a flash of childish glee, the Funland Community Playground officially opened to the public. More than 100 children surged past the wooden fence, up the ramp and under the castle gate.

They ran, screamed, laughed and stared in amazement at the new toy they and their parents built.

Neighbors of turkey grower Don DeMoss, disturbed over the “poisoning program” he began last week, say they have sought help through official channels with no results.

They’re hoping public opinion will influence DeMoss to cease and desist his poisoning program, since there appears to be no legal means to prevent it.

Mrs. Tom Severns and Mrs. John Mayes, close neighbors of DeMoss, said they were told it was a matter of civil action, and no criminal charge could be made “unless a child is poisoned.”

DeMoss reportedly stated last week that dogs had killed over 200 of his turkeys in the two weeks previous on his ranch, 6 miles northeast of Hermiston, and that he had served notice on neighbors that he was placing strychnine-treated hamburger on his property.

Since then, one dog, owned by the Severns, and another, belonging to the Mayes, have died. The Severns’ dog was taken to a veterinarian who, according to Mrs. Severns, told them the probable cause of death was strychnine.

Mrs. Bernard Kendall had a unique surprise early Saturday morning while out in the yard watering her flowers. When she looked up, she found herself gazing into a pair of the roundest, most beautiful little eyes she had ever had the opportunity to see. They belonged to a little India monkey which came to make a call.

Mrs. Kendall called her daughter, Patty, and about that time the visitor made a flying leap to the shoulder of Mrs. Kendall who stood trembling with fear. When she again gained her senses, Mrs. Kendall invited the little caller into the house and she evidently had not had breakfast for she made a flying leap onto the table, recently vacated by the Kendalls. She helped herself to a little bit of everything on the table, including orange juice and oatmeal, but evidently had not heard of the bread shortage for she carefully selected a slice of the precious loaf, took one taste and threw it on the floor.

The monkey was eventually returned to owner Robert Keys, who had received the little creature from a soldier cousin serving in India.

One of the largest crowds ever inside the ball field in Hermiston attended the game last Sunday between Pendleton and Hermiston for the championship of the county. The attendance was estimated at about 600 people.

The game was a stem-winder, the most interesting game ever played here, and for a long time it looked like Hermiston would win, or at least had a more than an even break to win, for the score stood 1 to 1 up to the seventh inning, when the visitors annexed two more scores and put the game away on ice, for after that the local boys simply could not hit Williams’ fast ones.

The big crowd was universal in its approval of the game, and those attending from Pendleton said they were well repaid for their trip and mentioned the fact that Hermiston gave the Bucks their only really tight game of the season.