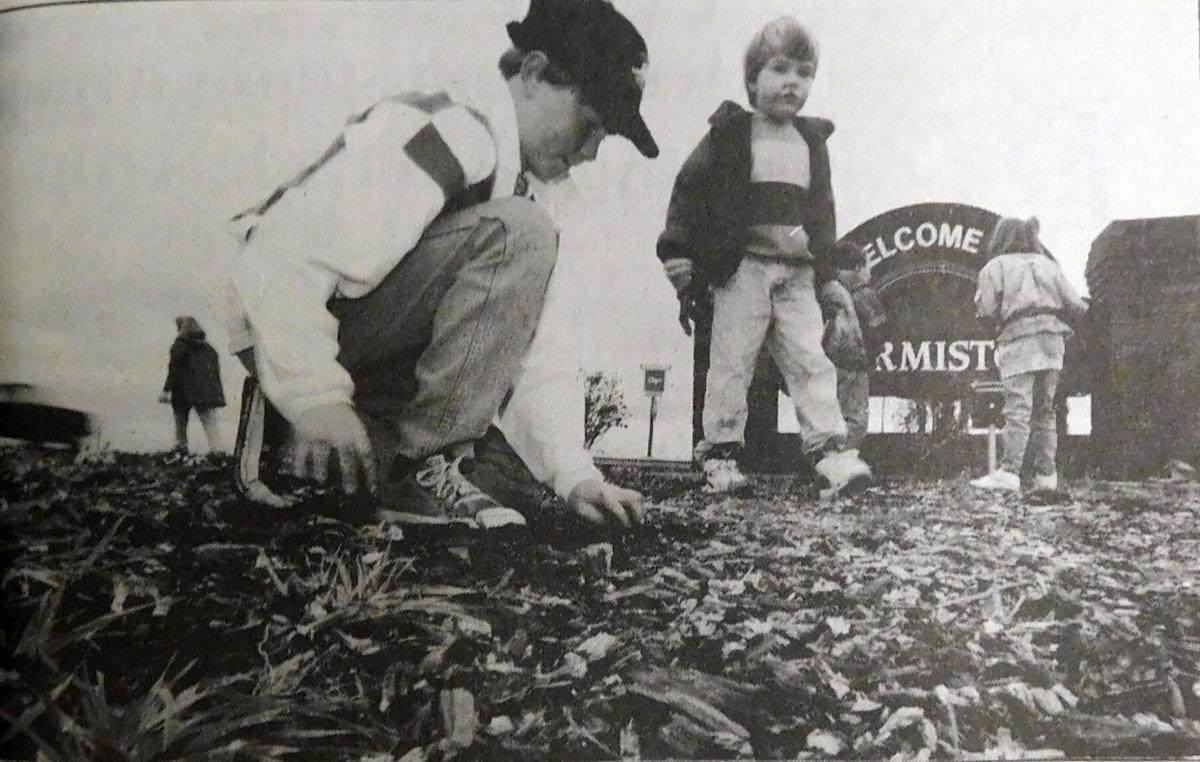 Caleb Johnson, 10 and Graham Melnychenko, 4, of Hermiston Junior Academy pull weeds around the “Welcome to Hermiston” sign on the south end of town in 1995. 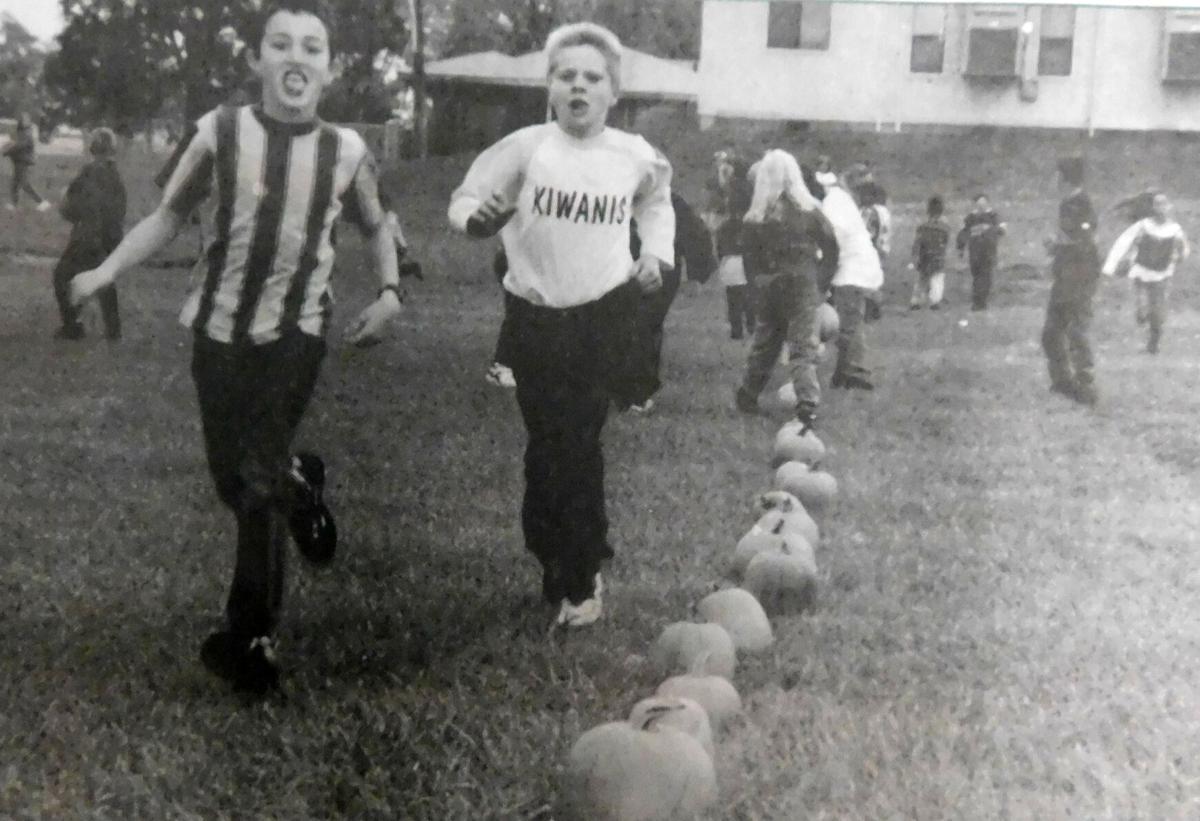 Sunset Elementary School students Bobby Kalal, left, and Greg White compete in the Pumpkin Dash at a fall celebration hosted by the Hermiston DARE program in 1995. 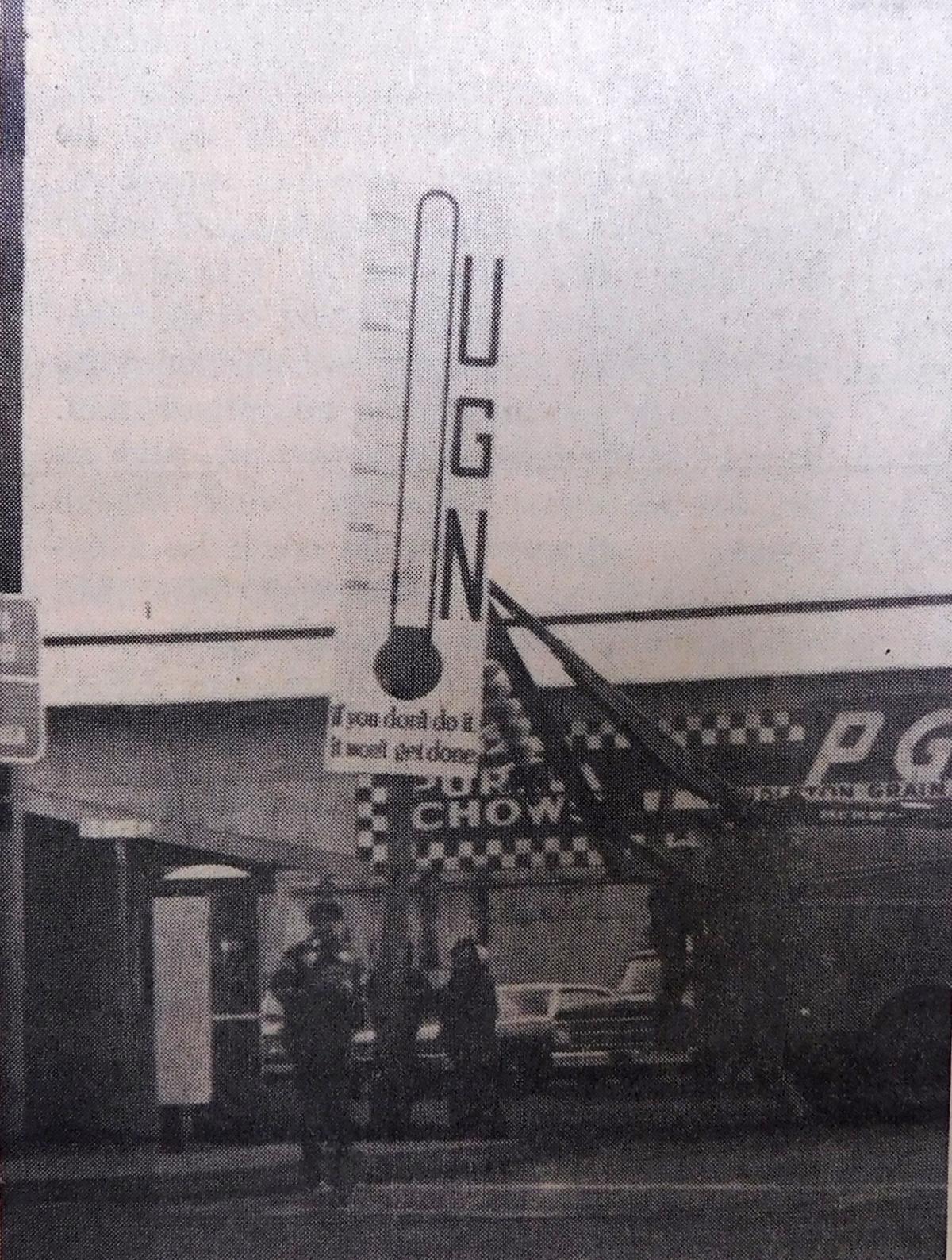 A thermometer sign on the corner of First Street and Main Street in Hermiston shows money raised for the United Good Neighbor campaign in 1970.

Caleb Johnson, 10 and Graham Melnychenko, 4, of Hermiston Junior Academy pull weeds around the “Welcome to Hermiston” sign on the south end of town in 1995.

Sunset Elementary School students Bobby Kalal, left, and Greg White compete in the Pumpkin Dash at a fall celebration hosted by the Hermiston DARE program in 1995.

A thermometer sign on the corner of First Street and Main Street in Hermiston shows money raised for the United Good Neighbor campaign in 1970.

Police are focusing on a Corvallis man as a possible suspect in the Oct. 12 break-in at the Hermiston Community Center.

The police investigation into the break-in and vandalism at the center’s offices for the Hermiston Chamber of Commerce is effectively on hold until crime lab results come back on fingerprints lifted at the scene and other physical evidence.

A security camera video tape that was believed to contain images of the crime turned out useless, Lieutenant Jerry Roberts said. He said “hopefully the evidence will help us” build a case against the man. Roberts said the man was arrested Friday on outstanding warrants from Corvallis and Pendleton. He was discovered as officers investigated an alcohol-related complaint, Roberts said.

He said the man is also being investigated in connected with a robbery last Thursday at the Hermiston Dairy Queen. In that crime, a robber broke in to the restaurant after hours and made off with $1,200 in cash. Police were able to uncover both finger and shoe prints left by the robber.

Mrs. Cecil (Aileen) Ware, whose son was reported missing in Vietnam Nov. 4, 1969, said Tuesday she still does not know where he is but has found a breakthrough.

Army Sepc. 5 John A. Ware was not one of the 76 prisoners of war whose photographs were shown her and her husband by Army officers Monday. The pictures, in a book prepared by the Department of Defense, were dated from 1967 through March 1970.

Before being brought to Hermiston the pictures had been circulated among Spokane, Wash., families of MIAs (missing in action). None of the Spokane families had recognized a relative but one had identified a friend, she said.

Mrs. Ware told the Herald the Communists had blacked out the eyes in several of the photographs before releasing them. She said there was no chance, however, that her son was one of those pictures.

She described the pictures as a breakthrough because they provide still more information from the Communists.

Hermiston High’s Bulldogs defeated a scrappy Enterprise team on the local gridiron last Friday afternoon by a lone-point, 12 to 13 score. The Bulldogs scored during the first half and added the extra point, while the Enterprise lads were unable to add their extra point and the half ended 7 to 6 for Hermiston.

Again during the second half each team scored and neither was able to add the extra point. The field was wet and rain continued throughout the contest, making the ball very hard to handle.

Tomorrow the Bulldogs have an open date and are due for a well-earned rest before the game next Friday when the Pendleton Buckaroos will play on the local field.

2) Packing of turkeys at the Perry Bros. warehouse in Stanfield is in full swing this week with a 30,000 pound car being filled the other day. The operation started on Oct.4 and the sixth car is being shipped this weekend.

About 30 people are now employed in the picking and packing process and the birds are being shipped to East Coast markets.

Gordon Strader was severely bitten on the hand Sunday when he ran over his dog with his truck, on the road between here and Irrigon.

The dog fell from the truck and one of the rear wheels passed over him. Thinking the animal had been killed Mr. Strader was taking him out from under the wheel, when the dog turned and fastened its teeth in Mr. Strader’s hand. The latter tried to loosen the dog’s grip, but finally had to tear his hand loose, making an ugly wound.

The dog had been a pet of Mr. Strader’s for a number of years and rode on the truck with him constantly.

2) People of the project will be interested to know that a large number of swans, 12 to be exact, are at present on what is known as Baker’s Pond, north of town, and it is suggested that anyone having a means of getting to the pond would be well repaid by a trip there to see the beautiful birds.