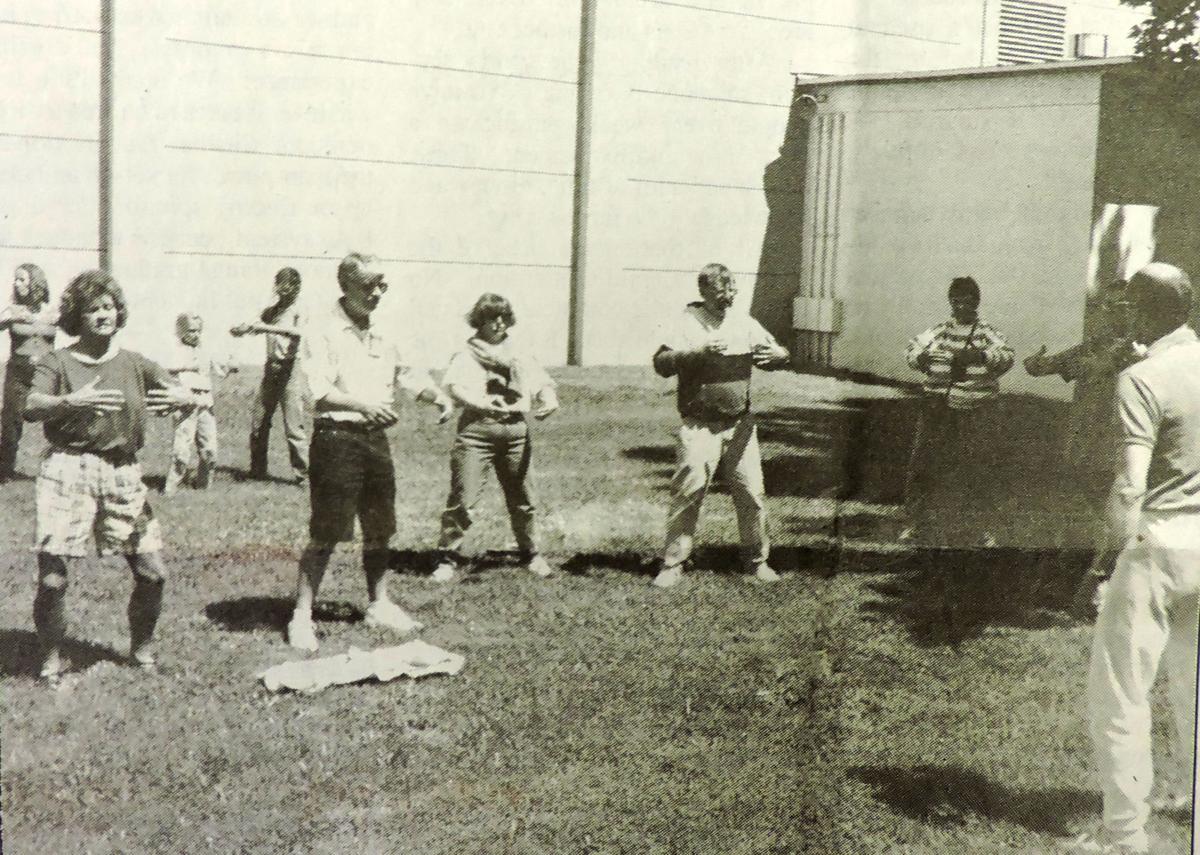 Dr. Ross Ronish leads a group in a Tai Chi lesson in the Staying Alive health conference at Hermiston High School in 1994.

Dr. Ross Ronish leads a group in a Tai Chi lesson in the Staying Alive health conference at Hermiston High School in 1994.

The biggest surprise coming out of Tuesday’s election is that Rep. Chuck Norris, R-Hermiston, will have a Democratic opponent in November’s election.

This legally entitles Jenson a place on the ballot.

Umatilla County clerk Tom Groat said both Norris and Jenson had been actively soliciting write-in votes for the Democratic nomination.

Jenson, a retired U.S. history instructor at Blue Mountain Community College, said he had been thinking of making a run for the seat for more than a year, but missed the filing deadline while taking care of other matters.

The memorial plaque dedication sponsored by the local veteran organizations to be held Sunday, May 25 at 2 p.m. at McKenzie Park has been finalized according to Roy Penney, chairman of the committee in charge.

The huge granite rock will have a bronze plaque embedded on its face with the words engraved “In memory of all who served in the armed forces of the United States of America in defense of their country.”

2) A Hermiston Marine, Lance Cpl. Richard T. Miller, 19, who was wounded three times in action since Oct. 1, was killed May 12 at Quag Nam, South Vietnam, according to word received May 15 by his mother Mary Weatherly.

The Marine was first wounded eight days after arriving in South Vietnam in October. He received wounds in action again soon after Christmas and again on April 9, according to his mother. He was home in November to attend a funeral service for his brother, Conrad, 20, who died in a truck accident in Portland.

A 1967 graduate of Hermiston High School, he was in Company L, 3rd Battalion, 5th Marines. The message delivered to his mother said he died “as a result of receiving penetrating hostile small arms fire to the head on a company search and clear operation.”

Mrs. Rosa Webb of Route One, Hermiston, last week received a telegram that her son, Pfc. James R. Webb, who had previously been reported as missing, is now listed as dead by the war department. A letter came this week explaining the telegram more fully. It follows:

“It is with regret that I am writing to confirm the recent telegram informing you of the death of your son, Pfc. James R. Webb, Corps of Engineers, who was previously reported missing in action in the European arena.

“An official report has now been received in the War Department which establishes the fact that he died on November 27, 1943, as a result of the sinking of a troop transport at sea by enemy action.

“I know the sorrow this message has brought you and it is my hope that in time the knowledge of his heroic service to his country, even unto death, may be of sustaining comfort to you.”

2) Two Hermiston ladies pleaded guilty Tuesday before Justice of the Peace E. P. Dodd on charges of disorderly conduct and contributing to the delinquency of a child. It was claimed that the mother and grandmother of the little girl had struck and whipped the child until stripes appeared on its body. The arrest was made by Chief of Police B.J. Nation. They were fined $15 each and court costs and given a 60-day jail sentence, suspended during good behavior for a year.

Because of the growth of the schools in the several districts of the Hermiston country and on the Western Land and Irrigation Company project, a movement has been started to establish a Union High School.

The school boards of the several districts have been considering the proposition for some time, and have recently circulated petitions to the District Boundary Board asking for the establishment of a Union High School, and calling for an election. The school districts interested are the Hermiston District, Columbia District, Minnehaha and Westland Districts.

2) The Farmers and Dairymen’s Luncheon will be held at the Auditorium in Hermiston on Saturday, May 31. One of the objects of this meeting is to celebrate the starting of the Hermiston Co-operative Creamery, which will commence operations the morning of June 1.

The Dairy dinner, coming as it does just before the starting of the haying work of the season, should be, and the committee hacing the affair in charge hope it will be, attended by every Dairyman and Alfalfa grower who lives tributary to Hermiston, Echo, Stanfield, Umatilla, Irrigon and Boardman.