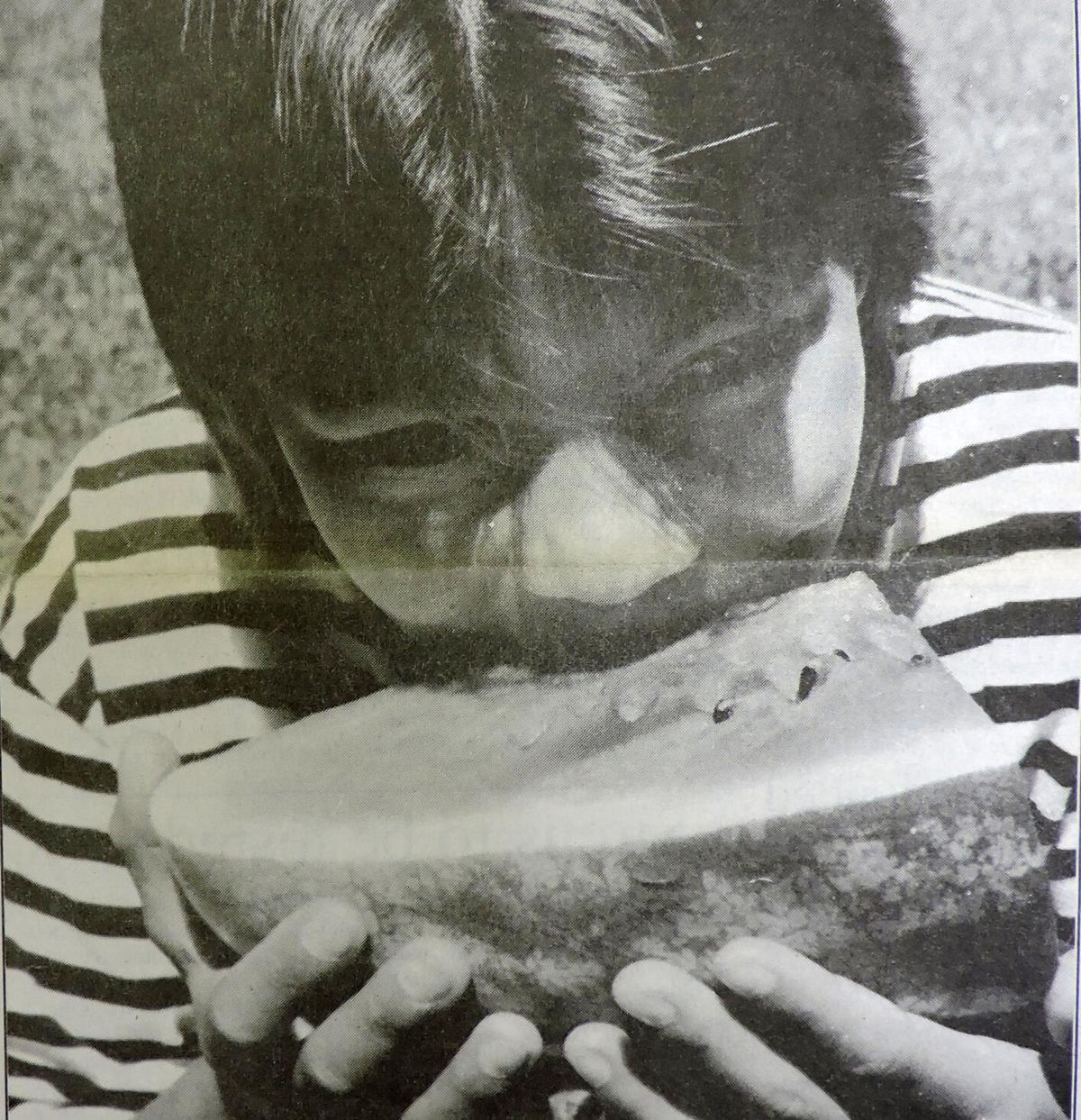 Angel Martinez, 10, bites into a juicy piece of watermelon in 1995. 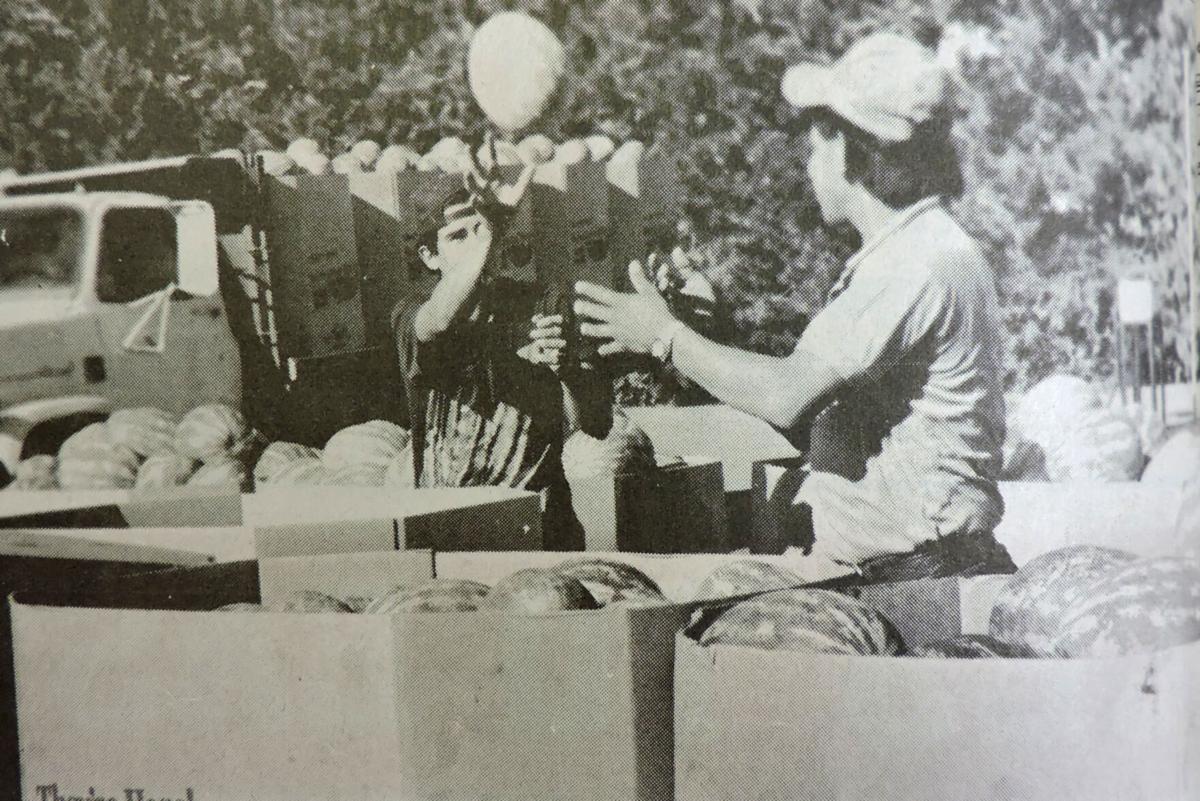 Marselino Mateo, left, tosses a Walchli watermelon to Zenon Magaña during harvest in 1995.

Angel Martinez, 10, bites into a juicy piece of watermelon in 1995.

Marselino Mateo, left, tosses a Walchli watermelon to Zenon Magaña during harvest in 1995.

Efforts to build a skateboarding arena in McKenzie Park will resume in earnest next month.

“We kind of put it on hold for the summer,” said Michelle McKimmy, because the 10 boys involved in the project, including her son, Brandon Reed, had other commitments.

Reed approached city building official Hank McDonald with the idea last spring. At McDonald’s urging, Reed brought to the idea to the Hermiston Parks and Recreation Committee, which approved the arena and pledged $5,000 in city funds for the project.

McKimmy said materials alone will run about $10,000. The boys will be asking local businesses for donations to build the arena, she said.

The mother of a Hermiston youth in Vietnam received the first word this week from her son that he was injured in action, nearly 20 days after the accident occurred.

Mrs. R.B. Blahm told the Hermiston Herald Tuesday that her son, Private First Class Danny Aiken, was hospitalized at Cam Rahn Bay on July 8 with severe burns on his hands and face. She said neither the war department nor the Red Cross had informed her of her son’s condition.

The burns seared Aiken’s eyes shut for about 10 days and he will have to be taught how to use his hands again, said Mrs. Blahm. She said he has regained partial sight.

The incident, as related to Mrs. Blahm by her son, was that he and two other men were aboard a helicopter on a mission with another helicopter escort. The ship Aiken was in landed in a village called Duc Pho, where a booby trap was thrown aboard the helicopter, exploding on impact. Her son said a captain riding in the copter was killed and the pilot received minor facial burns.

A 1967 graduate of Hermiston High School, Aiken was a side door gunner and crew chief aboard the helicopter, and entered the Army in November of last year. He has been in Vietnam two months.

L.E. DeBaun escaped with minor burns on his right hand last Thursday evening when his car caught fire and burned while he was returning from a business trip to Pendleton.

The blaze started in the wiring on the instrument board and spread very rapidly as he had no means of extinguishing the blaze and neither did the first two cars to arrive on the scene. DeBaun pulled the burning wires from the car which caused the only burns he suffered.

The car is a complete loss with only the two front tires remaining for salvage. DeBaun was alone on the trip and reported it was the hottest, fastest blaze he ever witnessed.

2) For the first time during the 41 years since Echo was incorporated, the special bond election Tuesday resulted in a unanimous vote of the electors. The proposition of issuing $7,500 in bonds for drilling a deep well for the municipal water system was approved by 118 voters without a negative ballot being cast.

J.B. Beebee, a farmer four miles north of town, saw two tiny boys trudging along the road Monday evening near his home and took them in to question them. He found that they were trying to walk to the Eastern Oregon State Hospital to find their mother, who is confined there. Mr. Beebee kept the children overnight and delivered them to Mayor F.C. McKenzie, who obtained the following story:

Their names are Owen and Clyde Ellinger, ages nine and six, and their father, a real estate broker in Bend, had given them money to come and see their mother, who was in the hospital in Pendleton, but was shortly to be discharged and they intended to go home with her.

They said that their father had not given them the exact fare and as he was not in the station when the train pulled out, they had purchased a ticket for the distance that their funds would allow and intended to strike out and walk from that point.

Mr. McKenzie took them with him to Pendleton, as he was going there on business, and investigated the case thoroughly with authorities at the hospital.

He found that the boys’ mother is in the asylum, but that their father died about four months ago in Bend.

The children had been placed at a home in Beaverton, and how they had obtained money to get away to see their mother has not yet been found out.