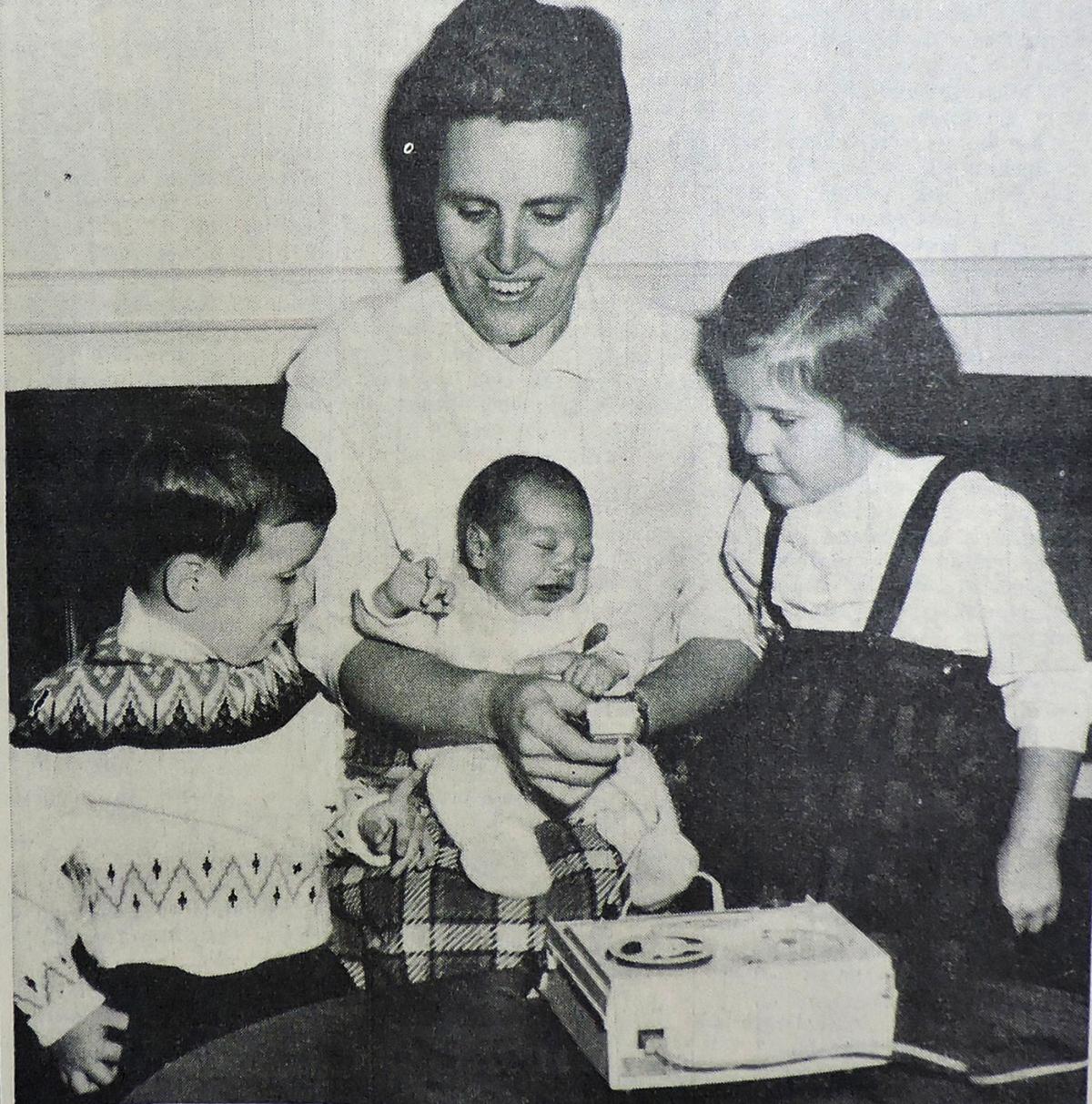 Staff Sgt. David A. Fitzgerald’s family makes an audio recording to send him during his deployment in the Philippines for Christmas in 1969. Mrs. Fitzgerald holds baby Mark, three weeks old, Charles, 2, and Fay, 4. 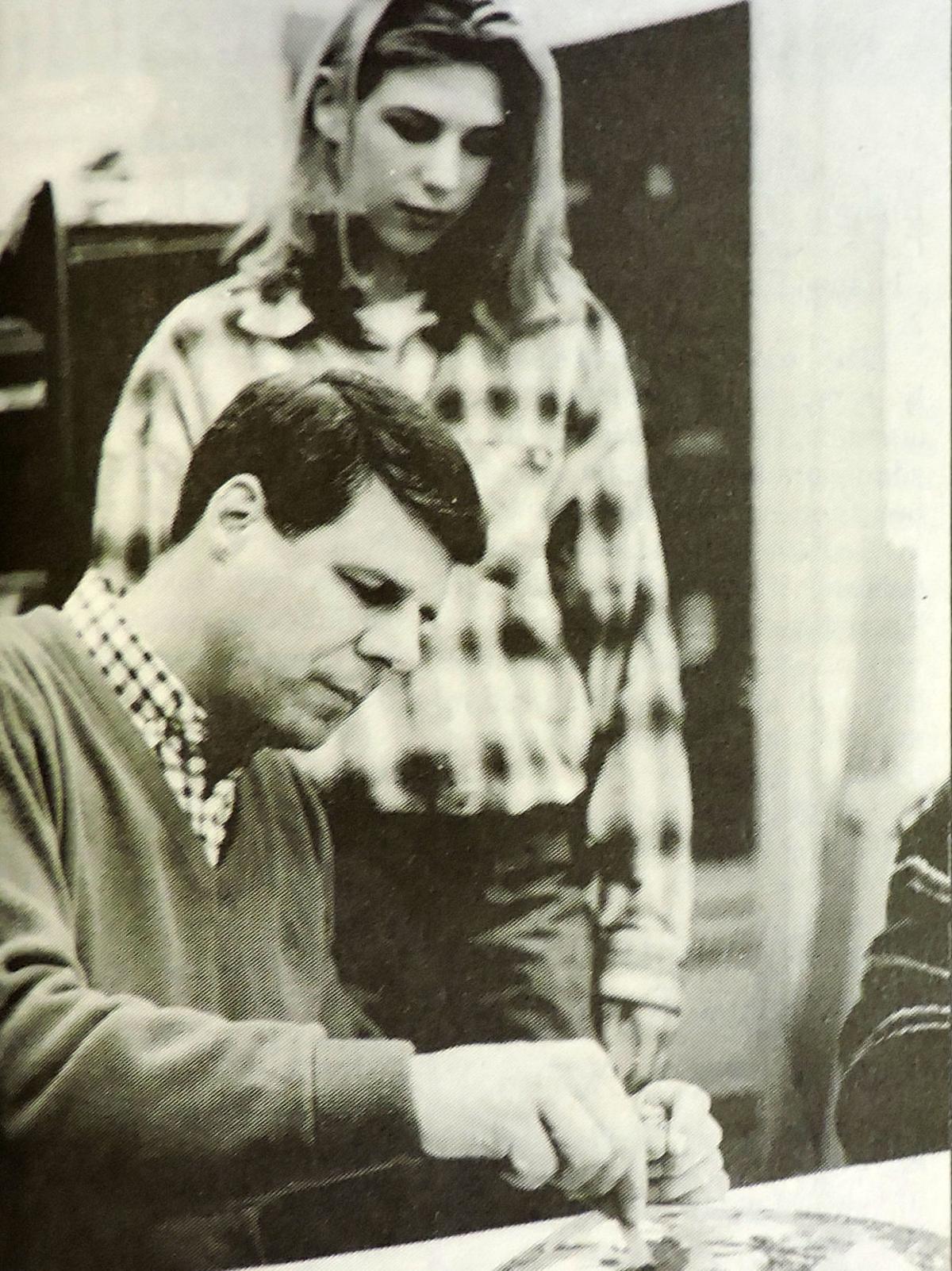 Hermiston High School junior Jennifer Tracy watches superintendent Jer Pratton complete an art project in 1994, while he spent a day living the life of a high school student in the district.

Staff Sgt. David A. Fitzgerald’s family makes an audio recording to send him during his deployment in the Philippines for Christmas in 1969. Mrs. Fitzgerald holds baby Mark, three weeks old, Charles, 2, and Fay, 4.

Hermiston High School junior Jennifer Tracy watches superintendent Jer Pratton complete an art project in 1994, while he spent a day living the life of a high school student in the district.

Last February, the Hermiston City Council adopted an ordinance that gave police the power to impound the cars of those caught driving without insurance.

“That would indicate people are getting the message,” Roberts said.

2) Work on the renovation of the Hermiston Community Center building could begin as early as next week.

Originally, the new facility was projected to open by the first of the year, but officials are now projecting a late July or early August opening.

The Department of Army has announced that all toxic chemical munitions on Okinawa will be relocated to a military storage site in the United States. The munitions will be moved by ship from Okinawa to the U.S. Navy Ammunition Depot at Bangor, Wash. and then by rail to the Umatilla Army Depot.

Approximately five shipments will be required. It is anticipated that the first shipment will leave Okinawa later this month or in January and that the operation will be completed in the spring of 1970.

2) William A. (Bill) Silvey, former Chief of Police of Hermiston, lost his life in an accident at 8:10 p.m. Tuesday, Dec. 2, on Washington Highway 42, three miles east of Dayton.

According to information received by Oregon State Police of the Hermiston office, Silvey, operating a mail truck, was westbound coming down a light grade on black ice. Apparently another vehicle was in the ditch, with flares displayed. Silvey observed the flares and applied the brakes, with the result that the tractor and semi slid on the ice and jack-knifed, according to the police report.

The tractor proceeded into the ditch on the side of the highway, truck in the bank, and the trailer demolished the tractor, it was reported.

Wilvey served as Chief of Police of Hemriston from September 1952 to December 1964.

Many tales of heroism have come out of the present war, but the names therein oft times are not familiar. However, a recent account in the daily papers contained a name well known in Hermiston. The story related the experiences of a U.S. Navy minesweeper during the victorious Marshalls and Marianas campaigns.

Included in the story was an account of how one sailer, Roy White, boatswain’s mate second class, and a son of Roy White of Hermiston, won a citation for exceptional bravery by diving into shark-infested waters repeatedly to recover reconnaissance photographs of Jap gun installations.

White was listed high among the personnel of the minesweeper for gallantry in action in operations around Magicienne Bay. He stood long hours watch as petty officer in charge of minesweeping gear. He was fearless in staying at his post in the face of Jap plane strafing.

However, it was for diving several times into the shark-infested bay for reconnaissance photographs of Jap gun installations which were dropped by American planes, that White was cited for “meritorious service above and beyond call of duty” by Commander Ralph S. Moore.

While returning from a sick call on the Furnish project last Saturday night in the sleet, Dr. Adams missed the bridge over the feed canal southeast of town and plunged with his car into its icy waters.

The miss of the bridge came through the windshield of the car becoming so misty that it caused the doctor to miscalculate. The car had to be pulled out by a team of horses. The doctor seemed none the worse for his involuntary dunking.

2) And in the course of human events it has come to pass that the city of Hermiston will, through the Commercial Club, endeavor to purge itself of all and sundry undesirable solicitors for money by subscription or otherwise, and with this decision comes the stipulation that hereafter all persons so engaged, at any time of year, must have credentials that their solicitations are for bona fide benevolent or charitable purposes.

This new order of things is hoped will do away with the fellow with a bogus withered arm or a game leg who generally solicits alms to get an education and uses the money for other purposes, the blind beggar that can probably see pretty well, and in fact all such fakirs that prey upon and gull the public generally in towns like Hermiston.