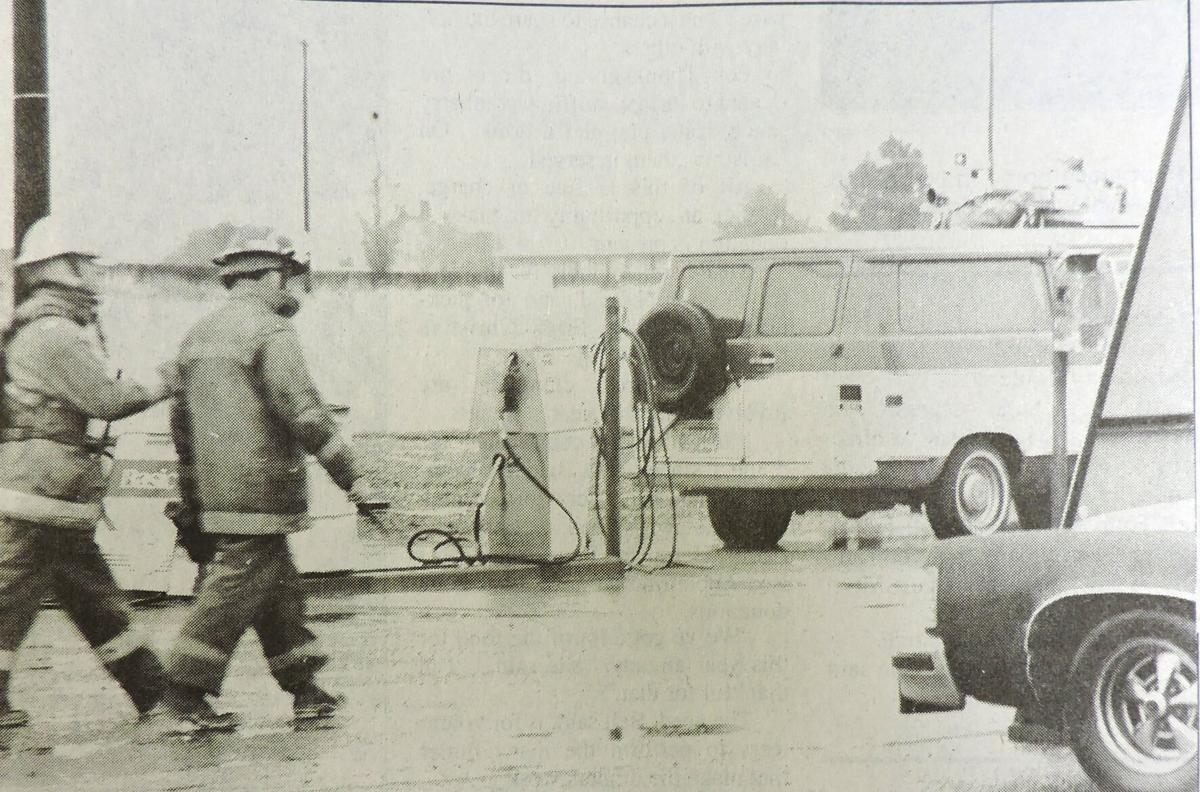 Firefighters keep an eye on a gasoline spill at Jerry’s Fuel Shop outside Umatilla in 1995. 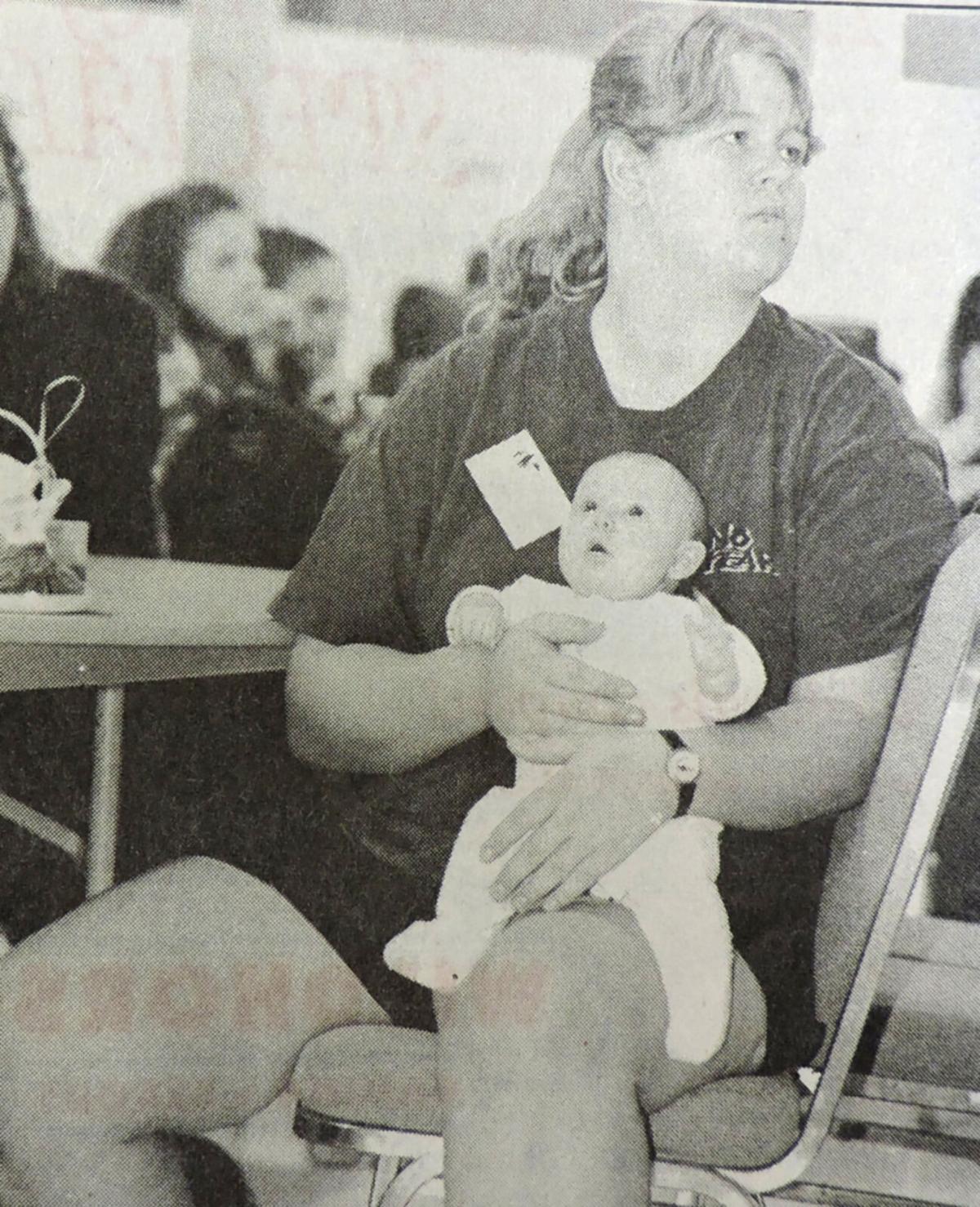 Amy Johnson, 18, of Milton-Freewater, holds her 2-month-old daughter, Karen, at a Teen Parent Summit in 1995 in Hermiston. 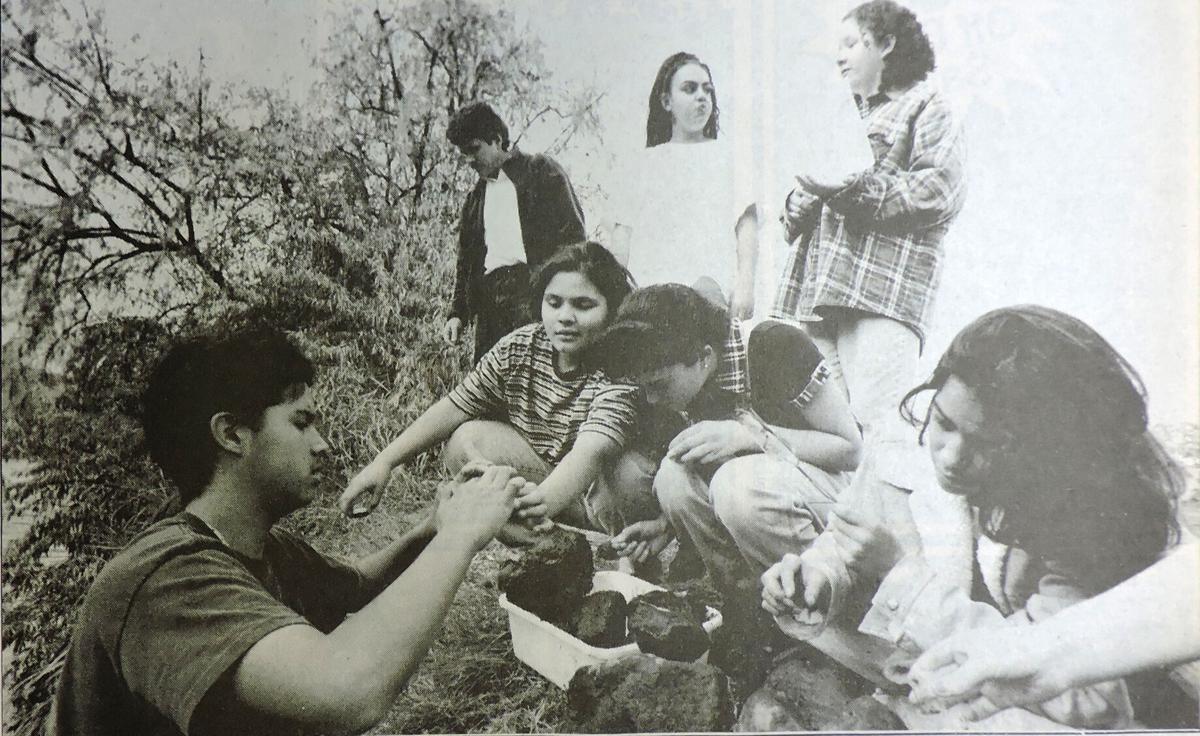 Students from Bob Mansfield’s life science class at Clara Brownell Middle School in Umatilla learn about aquatic insects on a field trip in 1995.

Firefighters keep an eye on a gasoline spill at Jerry’s Fuel Shop outside Umatilla in 1995.

Amy Johnson, 18, of Milton-Freewater, holds her 2-month-old daughter, Karen, at a Teen Parent Summit in 1995 in Hermiston.

Students from Bob Mansfield’s life science class at Clara Brownell Middle School in Umatilla learn about aquatic insects on a field trip in 1995.

Two Umatilla businesses were closed when a van ran into a gasoline pump, spilling more than 440 gallons of fuel at the intersections of Highways 395 and 730 Saturday.

Karen Strong, operator of Jerry’s Fuel Stop at the intersection, had gone out to the pumps to fill an older GMC van with regular.

However, Strong said the driver went past the pump. She said she asked him to back up so the nozzle could reach. He did so, but turned into the pump, knocking it from its foundation, she said.

The automatic shutoff valve built into the pump did not work, and gas began to flow onto the ground.

“From the bottom, it was pouring like a gusher,” Strong said.

She asked the driver, Vincente Flores Rodriguez, 57, for his license and insurance information.

“The only good thing is the guy has got insurance,” she said.

She then called her husband, Jerry Flores, then the fire department. The gas was shut of in about 15 minutes. By then, it had mixed with rain puddles that were standing throughout the property.

Opening of the Golden Manor, a 50-unit housing project for the elderly at 980 Hermiston Ave., is scheduled for Sunday between 2-4 p.m.

The first turnkey project ever in Umatilla County, the low-rent quarters include 22 efficiency units, 26 one-bedroom units and two two-bedroom units.

2) Two persons were injured Saturday morning when the house in which they were staying became one of three objects in the Hermiston area to be destroyed by fire in the past week.

Mr. and Mrs. Robert E. Conner were occupying the Stewart residence, just off Diagonal Boulevard, when a propane explosion began to engulf it at 5:45 a.m.

According to Assistant Fire Chief Bill Hibbard, Conner said he smelled gas and heard a hissing sound, arose and shut off one valve adjoining the furnace. The pilot light to the range apparently was still on, however, and the gas soon ignited.

Mrs. Conner is in Good Shepherd Hospital recovering from severe burns received in the fire. Hibbard quoted her as saying she was burned because she stayed inside to telephone the fire department instead of escaping as soon as the explosion had occurred.

Conner broke a toe in the process of running out of the house, Hibbard said.

Beveridge-Hart Construction Co., a new firm which will specialize in the erection of commercial stores and structures, has been incorporated at Salem and becomes the first construction company to publicly announce intentions of gunning for building contracts in the potential boom area of the proposed $87 million McNary Dam near Umatilla.

The firm will soon start work on two buildings in Ocean Lake, Oregon.

Comm. Designer Hugh Cook, recently released as a lieutenant commander from the Navy, will work in cooperation with the construction firm.

Associated with Hugh Cook will be Laurence C. Wiggins, who will handle the contract and financial end of the business. Beveridge and Hart plan to visit Hermiston and other cities in the vicinity of the McNary Dam site within the next two weeks. They will study needs for both housing and commercial structures.

All in all, Saturday was a red letter day for the Hermiston High School, for they demonstrated that they were the liveliest, most hospitable school in the county, and this impression was carried away by the Pendleton boys. The following is a short squib from the East Oregonian printed about the game:

After taking a 13 to 7 defeat from the local boys, the Hermistonians entertained at a banquet which was served at the local hall by the girls and their mothers. A dance was also held that evening, but most of the local boys had to come home early in order to get transportation.

Talk at the Pendleton high school today centers about the good spirit displayed by the west end people.