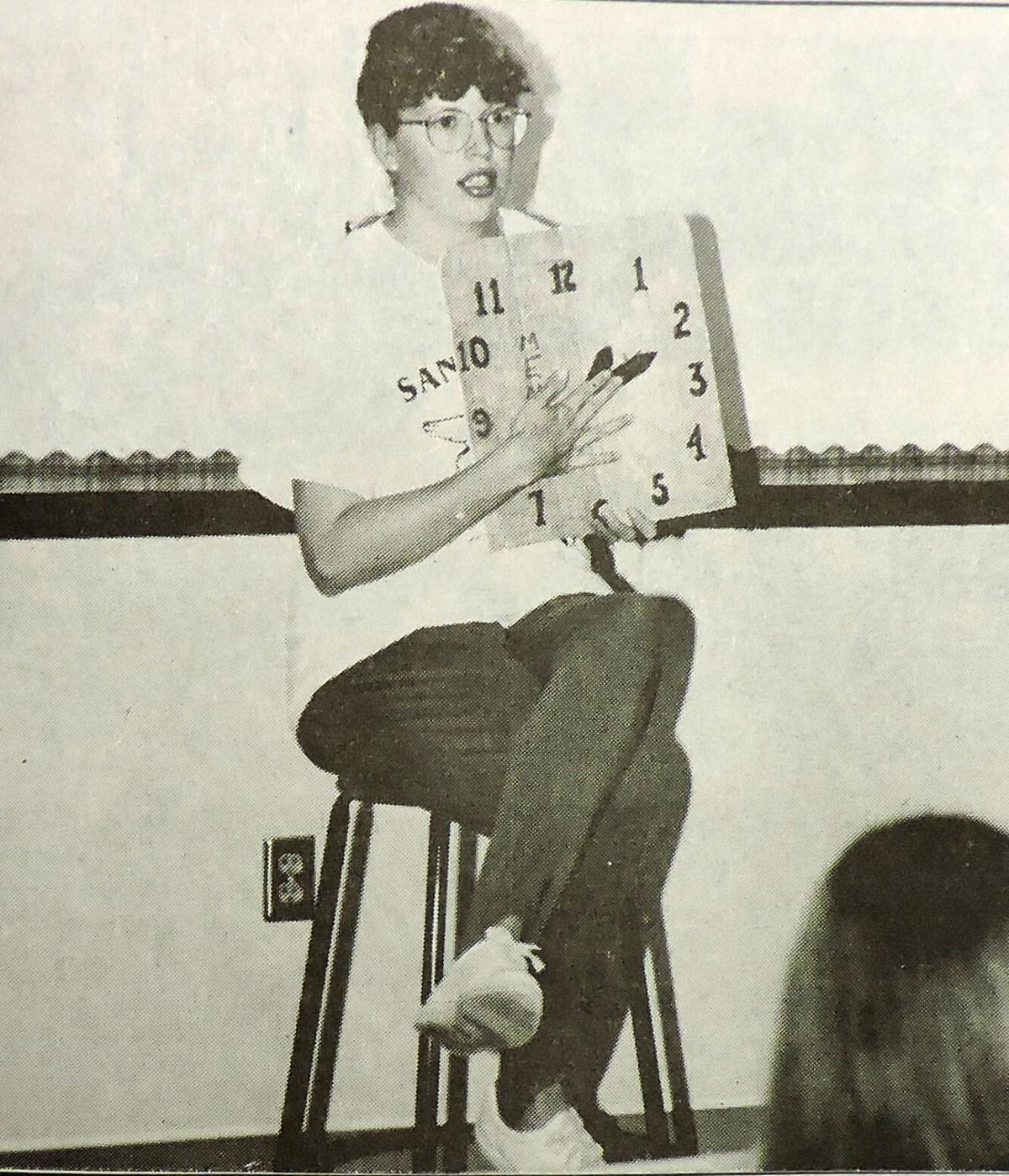 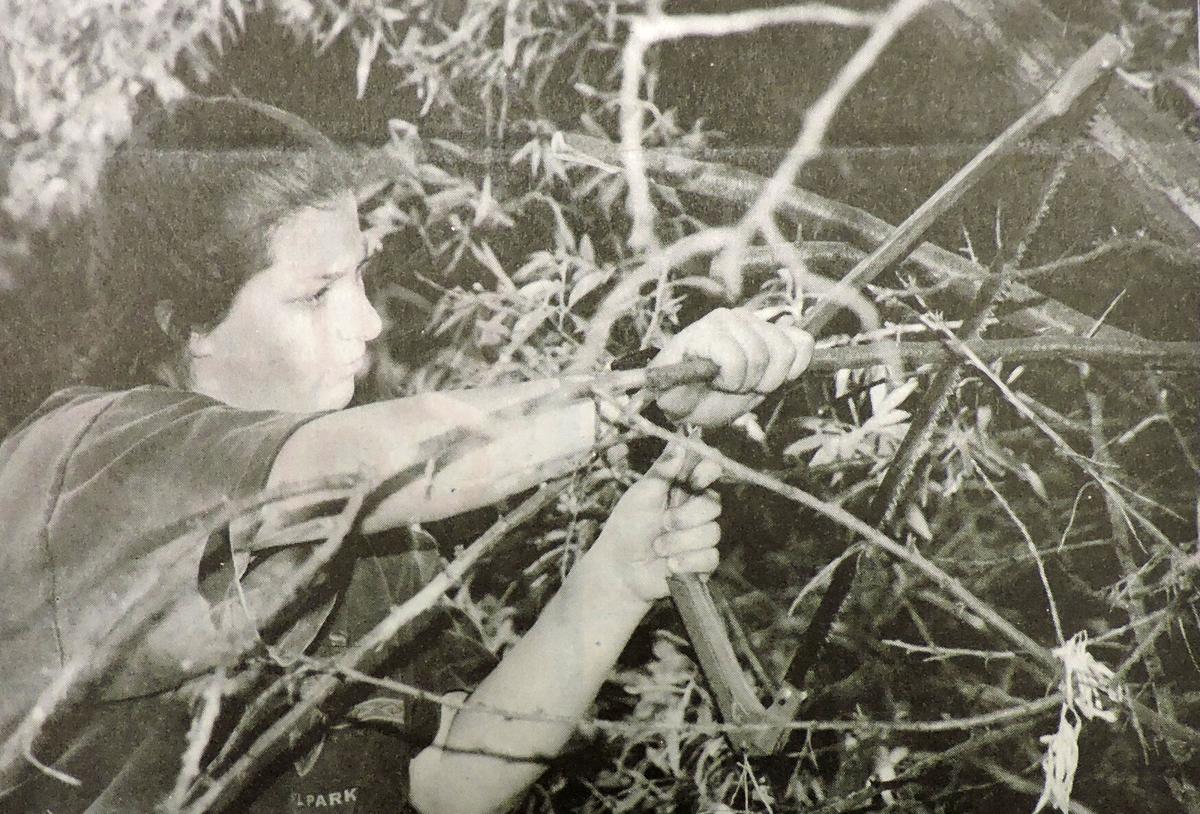 Maggie Ruby, 13, works with her class to clear branches around Sandstone Middle School in 1995.

Maggie Ruby, 13, works with her class to clear branches around Sandstone Middle School in 1995.

Whoever broke into Alvie Acheson’s Hermiston home took the usual items — a few guns and other more portable property.

The burglar also took a book of checks.

This has happened before, so Acheson knows what to expect.

Fifty dollars worth of pizza here, some new clothing there, groceries somewhere else, all paid for by stolen checks.

She will call her bank and close her account, then wait for angry calls from creditors who feels they may have been cheated themselves.

It is a story that police are hearing more and more.

“The Murder of Til Taylor, a Great Western Sheriff,” by Ernest L. Crockatt, formerly of Pendleton, has just been published by Dorrance & Company.

Six prisoners broke jail in July, 1920, leaving Sheriff Til Taylor of Umatilla County mortally wounded. The murder touched off the most famous manhunt in the history of the Northwest. The author tells of the tragedy in which he was a posse-man and gives a history of the county and its environs, including Indian wars, stagecoach holdups and saloon shenanigans. Of special interest is Crockatt’s recounting of the evolution of the Pendleton Round-Up, part of the permanent legacy of Til Taylor. Taylor was one of its founders and one of its presidents. The book is illustrated and has a foldout map of the Blue Mountain country of Eastern Oregon where the manhunt took place.

Born in Glasgow, Scotland, Crockatt came with his family to the United States in 1908. They settled in Pendleton where the author first met Taylor. Crockatt attended college and after serving in the 10th Canadian Infantry during World War I, studied at the University of Oregon School of Journalism. He was news editor of the Pendleton Tribune at the time of the murder.

Construction of the E.P. Dodd building and the new post office building on Main Street have advanced rapidly during the past week.

Frank P. Sargent Construction company have placed the roof timbers in place and have completed the east wall on the post office building, and have poured the concrete plaster on the 25-foot front building just west of the post office.

Shockman and Sons have started putting on the plaster board on the Dodd building Wednesday. The front of the structure is ready for the laying of brick and then the windows will be installed.

Dodd has started construction of another building on Main Street opposite the Oasis Theater which will be 25x70 feet of similar construction to his other new building. Dodd states that the building has not been rented as yet, although he has had several firms desirous of using the space.

2) Hermiston young ladies planning to leave for their respective schools and colleges for the coming term are reported by Supt. W. G. Kersbergen’s office as follows:

In the Portland Oregonian of September 12, W. T. Noel of Pendleton says: “Motorists bound for the Round-Up should be sure to turn to the left for Arlington after crossing the John Day River. This is the route via Hermiston and it leads to the new highway at Arlington.”

The recent rains have improved the roads greatly and tourists all over the Northwest are planning to drive to the Round-Up.

2) A.J. Strader did some fine work in smoothing up the city streets last week, dragging a scraper behind a truck, covering up some troublesome mud holes and generally improving the condition of the streets.

A new cement sidewalk has been constructed in front of the Western Land & Irrigation company’s office. The new signs are up at all the principal turns of the highway going through town. Inasmuch as Oregon has the unenviable reputation of being the poorest marked state for automobile tourists in the United States there is a comfortable feeling in knowing Hermiston will be a bright spot for travelers.