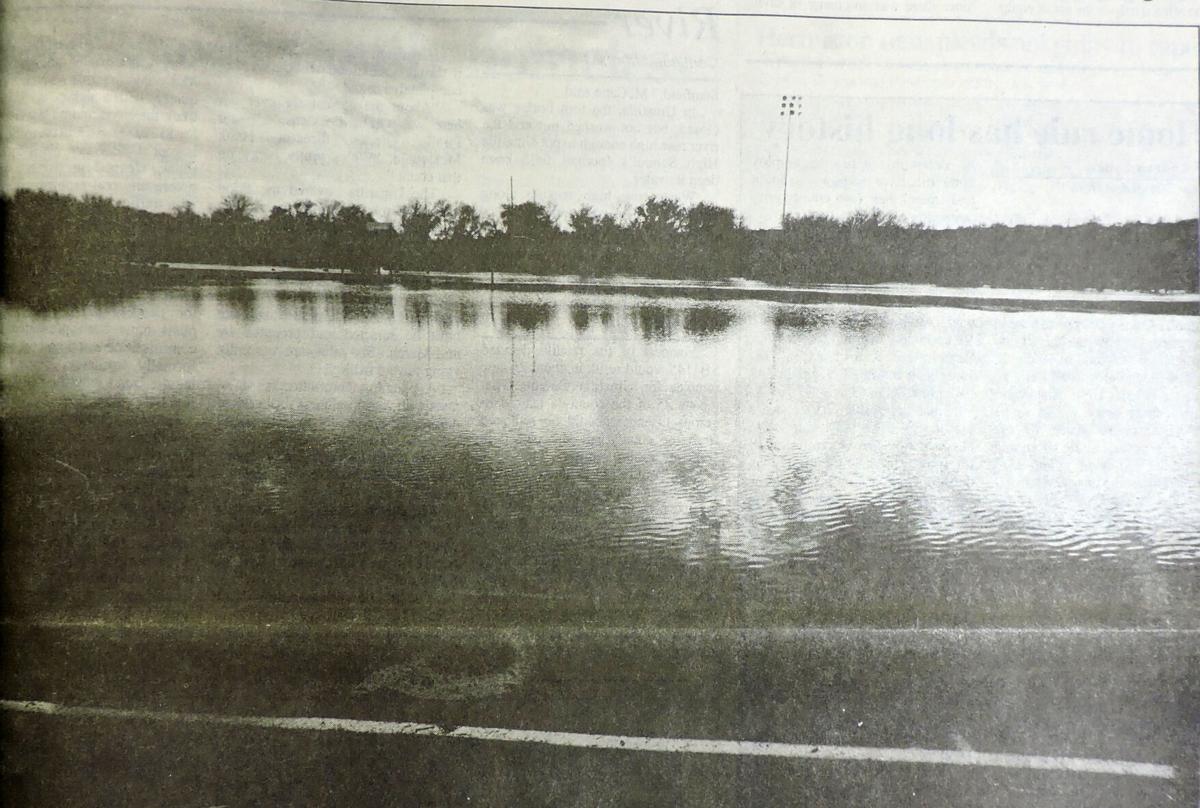 Umatilla School District’s athletic fields sit underwater after flooding in 1996. The photo from the Feb. 13, 1996, edition of the Hermiston Herald bears similarities to photos of the same area flooding again on Feb. 6, 2020. 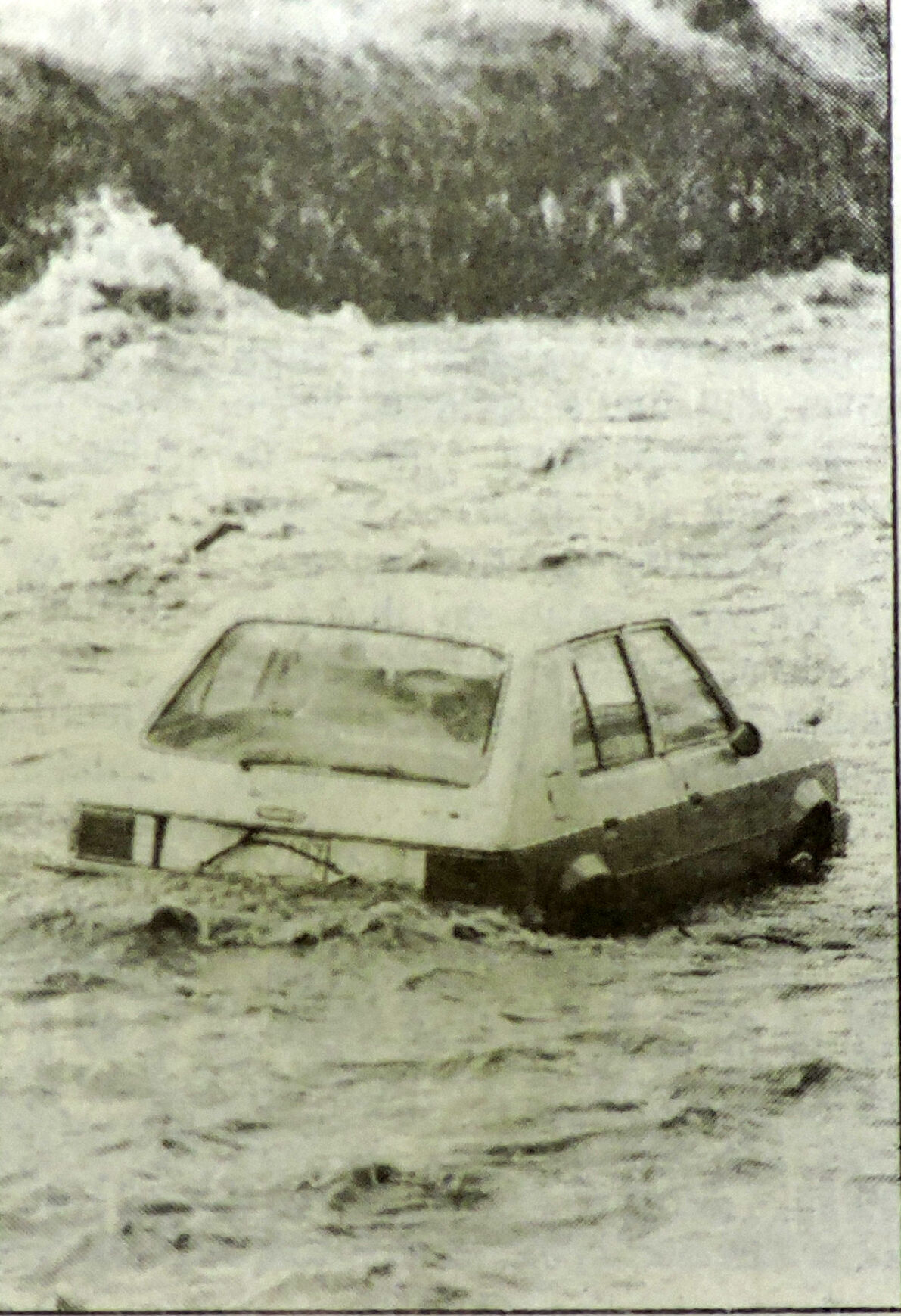 A car sits in flood waters along Umatilla River Road in 1996. 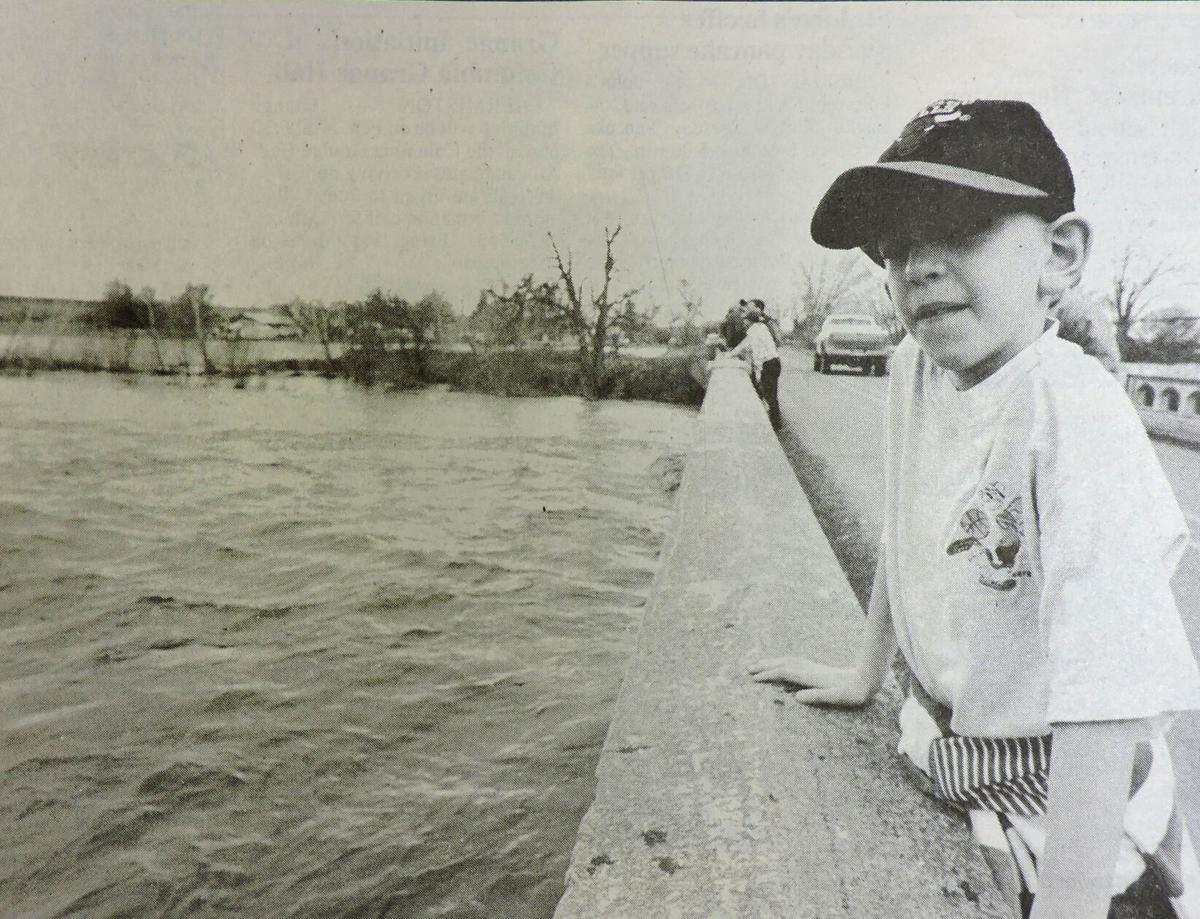 Thaddeus McAusland, of Echo, watches the Umatilla River gush beneath the bridge leading out of Echo during a flood in 1996.

Umatilla School District’s athletic fields sit underwater after flooding in 1996. The photo from the Feb. 13, 1996, edition of the Hermiston Herald bears similarities to photos of the same area flooding again on Feb. 6, 2020.

A car sits in flood waters along Umatilla River Road in 1996.

Thaddeus McAusland, of Echo, watches the Umatilla River gush beneath the bridge leading out of Echo during a flood in 1996.

Umatilla County has survived the flood of ‘96.

Waters raged along the Umatilla River at 16,000 cubic feet per second at their peak on Friday at 9:30 p.m. in Pendleton.

That same morning Sue Knapp of the Hermiston office of Oregon Fish and Wildlife said the river was clocked at 15,000 cfs at Three Mile Dam. Compare that with the docile sounding 635 cfs measured on Feb. 5.

President Bill Clinton declared both Oregon and Washington “disaster areas” and while Hermiston made it through with only light damage, some other places in Umatilla County weren’t so lucky.

“The worst damage of private property was along Mill Creek in the northeast end of the county,” said Tom Groat, public affairs officer for Umatilla County Emergency Management.

“The sheriff used a helicopter from Milton-Freewater to go up Mill Creek on Wednesday and Thursday to fly people out,” said Groat.

In all the helicopter brought out 24 people.

The cafeteria program at Hermiston Senior High School, dropped after the budget went down to defeat several times in 1964, may be restored next year under student management through the vocational cluster program.

A report by Garth Davis, head of the vocational education department of the high school, who recently visited Forest Grove High School to evaluate the program there, was well received by board members at Monday night’s board meeting.

The Forest Grove program, Davis said, is operated under the Food Education and Service Training program (FEAST) and involves vocational education students in all aspects of operating the cafeteria, including buying, preparing and cooking, and serving the food.

The administration and school board in Hermiston have been under pressure from several persons to reopen the cafeteria in Hermiston. Superintendent A. O. Larive said that the cafeteria, like all of the school cafeterias in the district, operated in the red, but lack of use by the students was the major reason for it remaining closed.

Hermiston Chamber of Commerce officers and board of directors this week appealed to congressmen in protest of the delay of the McNary Dam one year as a result of President Harry Truman’s trimming of the appropriation bill for the coming year. Only $600,000 is being asked for continuation of planning of the dam by the House Appropriations Committee.

Messages of protest were forwarded Tuesday to Washington, Idaho and Oregon congressmen asking that the appropriation of $5 million for the dam be included in the budget for the coming fiscal year. Congress has taken the stand that private industry should absorb all manpower during the immediate post-war period, but it is evident throughout the nation that public construction must be undertaken immediately to supplement private industry and avoid large scale unemployment.

The Valentine Tea given at the Public Library Monday afternoon proved one of the most pleasant and profitable occasions of the season.

The lecture room of the library was never more elaborately decorated and proved its fitness as a meeting place for community service. Gay with the perfusion of brilliant red hearts and colorful valentines, softly shaded lights, comfy chairs and cozy corners and an elaborately appointed tea table, the room presented a charming meeting place for the 50 ladies assembled.

Mrs. Thomas Campbell, who was appointed temporary chairman of the proposed organization, presided at the business meeting while Mrs. Newport acted as temporary secretary.

Various means and measures helpful to community interests were discussed and definite plans made for a permanent organization to be known as the Hermiston Community Club.

A committee was appointed to draw up by-laws and constitution which will be voted on at the next regular meeting. Fifty ladies signed as charter members and 50 cents were placed as the initial dues.