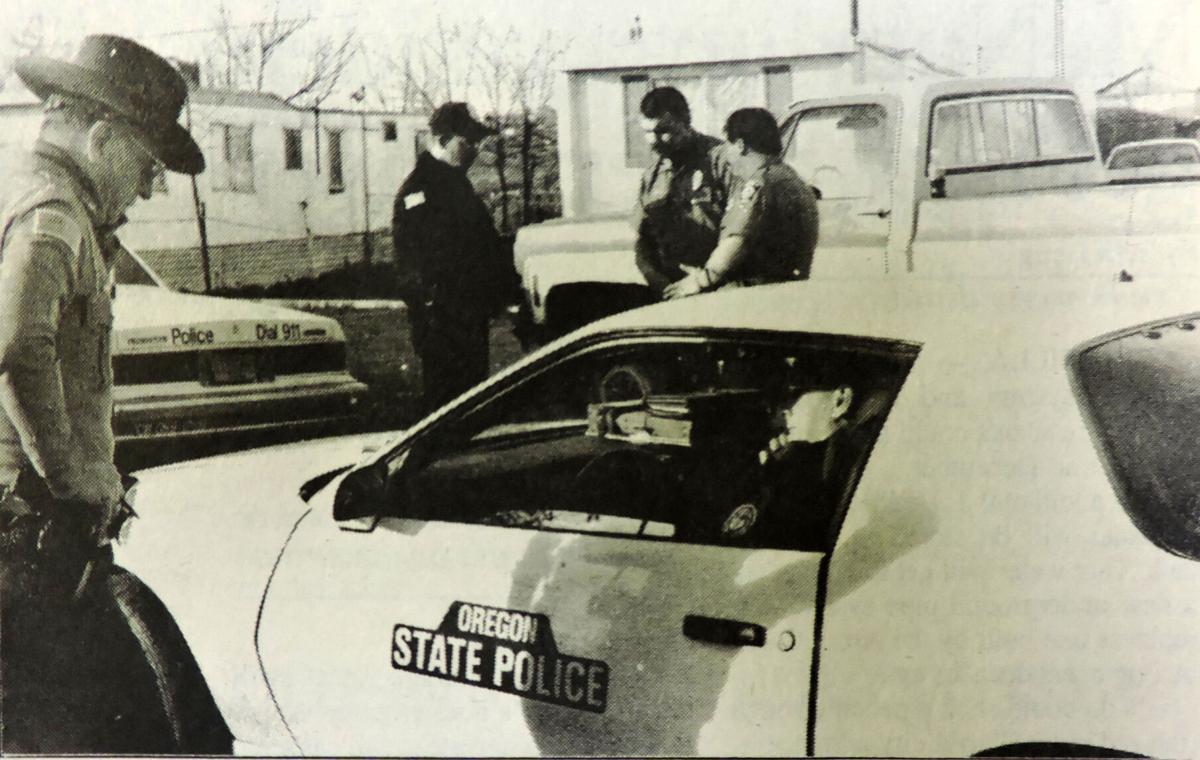 Police officers from Umatilla Police Department and Oregon State Police confer at the scene of a fatal Thanksgiving Day shooting between cousins in Umatilla in 1995. Police said the two men were arguing over a woman they were both romantically involved with before one allegedly shot the other and fled the scene. 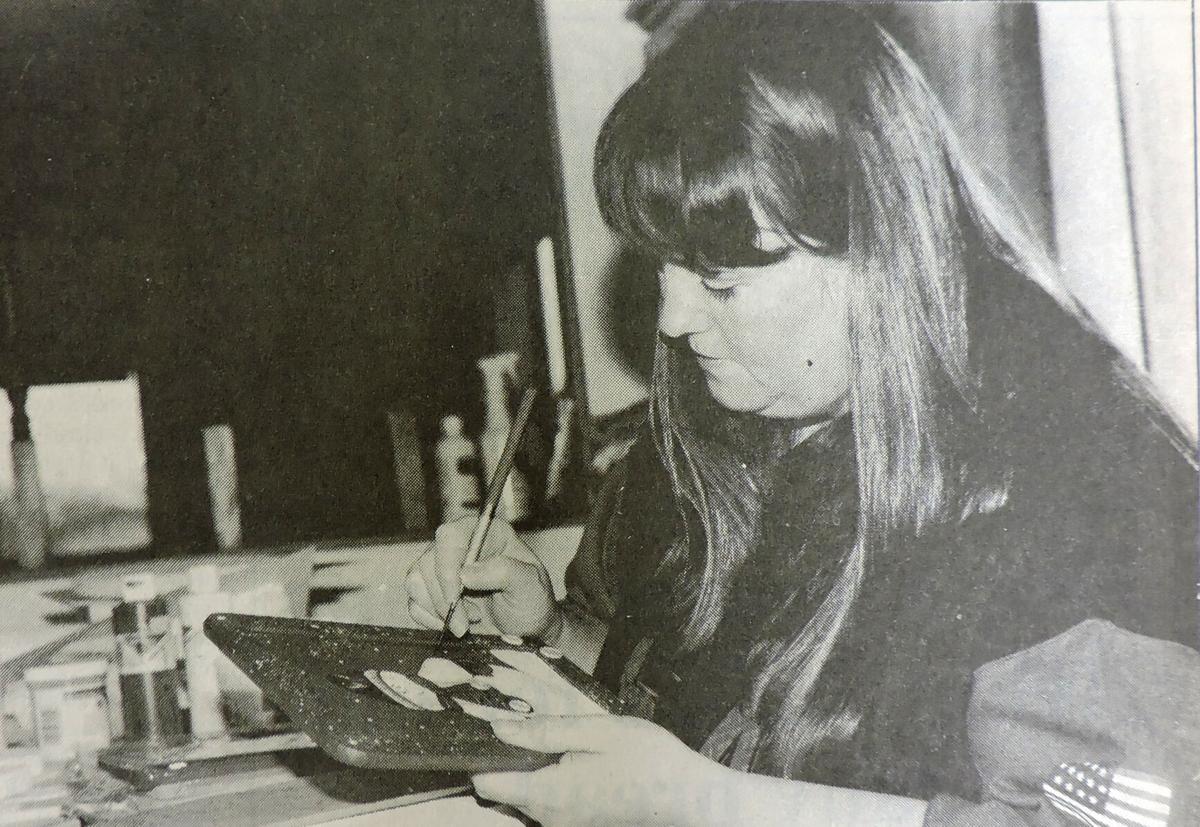 Susy Dewald works on crafts for the Hermiston Holiday Bazaar in 1995. 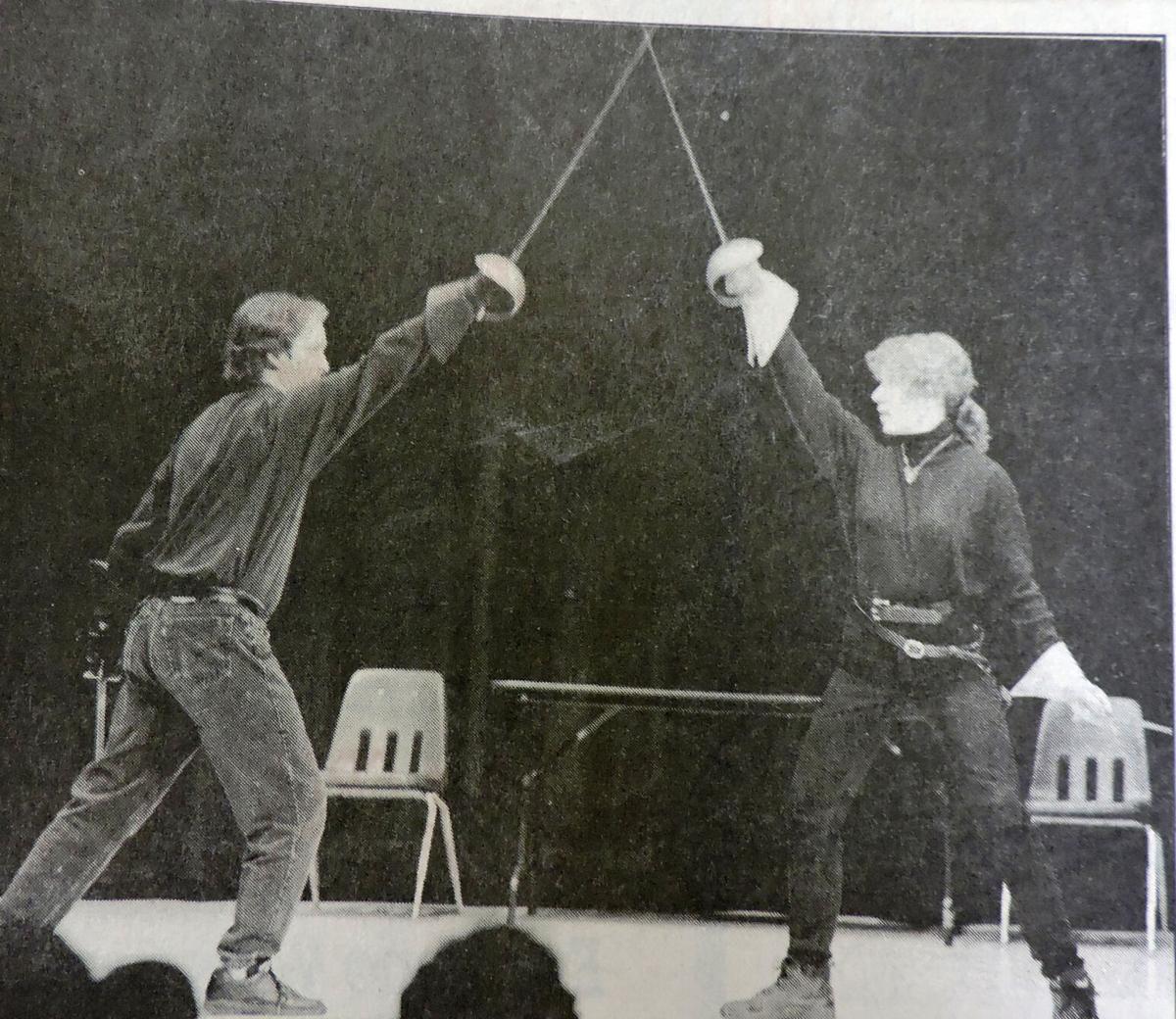 Peter Kijenaas, left, and Michelle Marain, of the Oregon Shakespeare Festival, put on a show for Hermiston High School students in 1995.

Police officers from Umatilla Police Department and Oregon State Police confer at the scene of a fatal Thanksgiving Day shooting between cousins in Umatilla in 1995. Police said the two men were arguing over a woman they were both romantically involved with before one allegedly shot the other and fled the scene.

Susy Dewald works on crafts for the Hermiston Holiday Bazaar in 1995.

Peter Kijenaas, left, and Michelle Marain, of the Oregon Shakespeare Festival, put on a show for Hermiston High School students in 1995.

It was once called the Hodge family’s gift to Hermiston and “Stoner Park” in the same Hermiston City Council meeting.

It was closed two Octobers ago and reopened three months later.

This morning, barricades are up at Hodge Park again between 6 a.m. and 5 p.m. during weekdays.

The closure, approved by the council, came at the recommendation of Hermiston Police Chief Andy Anderson. Anderson told the council by memo the park has seen a rise in illegal activity. Last Tuesday, officers arrested people for possession of methamphetamine and marijuana. Minors were taken into custody for illegal possession of tobacco and alcohol, he said.

None were students at nearby Hermiston High School. Those arrested were — and much of the larger problems are caused by — students at the Umatilla ESD alternative high school or by non-students, Anderson said.

By closing the park, officers will be able to cite those inside for second-degree criminal trespassing. Police plan to start writing tickets right away.

Hermiston area residents, while they were in Montana, Saturday evening lost two-thirds of their house and most of its contents to fire.

Lateness in discovering the blaze, according to Assistant Fire Chief Ed Lynch, permitted Mr. and Mrs. Edwin E. Cripe on East Punkin Center Road to lose as much as they did. A grandson of the Cripes, who has been residing with them, was also in Montana at the time.

The Hermiston Fire Department received the alarm at 8:16 p.m., which Lynch said was long after the fire started. John Walchli, South Edwards Road, discovered it two miles away as he was driving. He drove to it and, seeing that no one had turned in an alarm, went to the nearest available house (located at a point on the hill where the fire could not be easily seen) and turned in an alarm.

The club met again Tuesday evening and Pat Grubbs and Clay Porter of the Pendleton Airways, Inc., assisted the group in plans for the purchase of a plane by the club.

The chief problem confronting the club now is a designated field and hangar facilities, both of which are of vital importance.

2) S.A. Moore of Umatilla received notice this week from the U.S. engineers’ office in Portland that he is a successful bidder on one of the mess halls at Camp Abbott. The building is completely equipped with restaurant equipment which includes three ranges, sinks, toasters, coffee urn, heating stoves, boilers, etc.

Moore will go to Camp Abbott and salvage the material in the building and ship the lumber and equipment to Umatilla.

After completing the contract he will build Tiny’s Service Club which will be erected northwest of Hermiston near the Standard Oil Company bulk plant.

Word was received in the form of a telegram Friday morning to J.S. West, telling of the death of his son, Robert R. West, which occurred in Panama the day previous.

According to the dispatch, he fell from the roof of a building and died soon after reaching the hospital.

Robert R. West, or “Bob” as he was more familiarly known to most residents of Hermiston and the vicinity, was one of the first to enlist from the city, serving throughout the war and continuing in the service up to the time of his death.

During his service he rose up the ranks to chief engineer, and held that position until his untimely death.

The grief-stricken parents have the sympathy of the entire community, in this, their great bereavement.