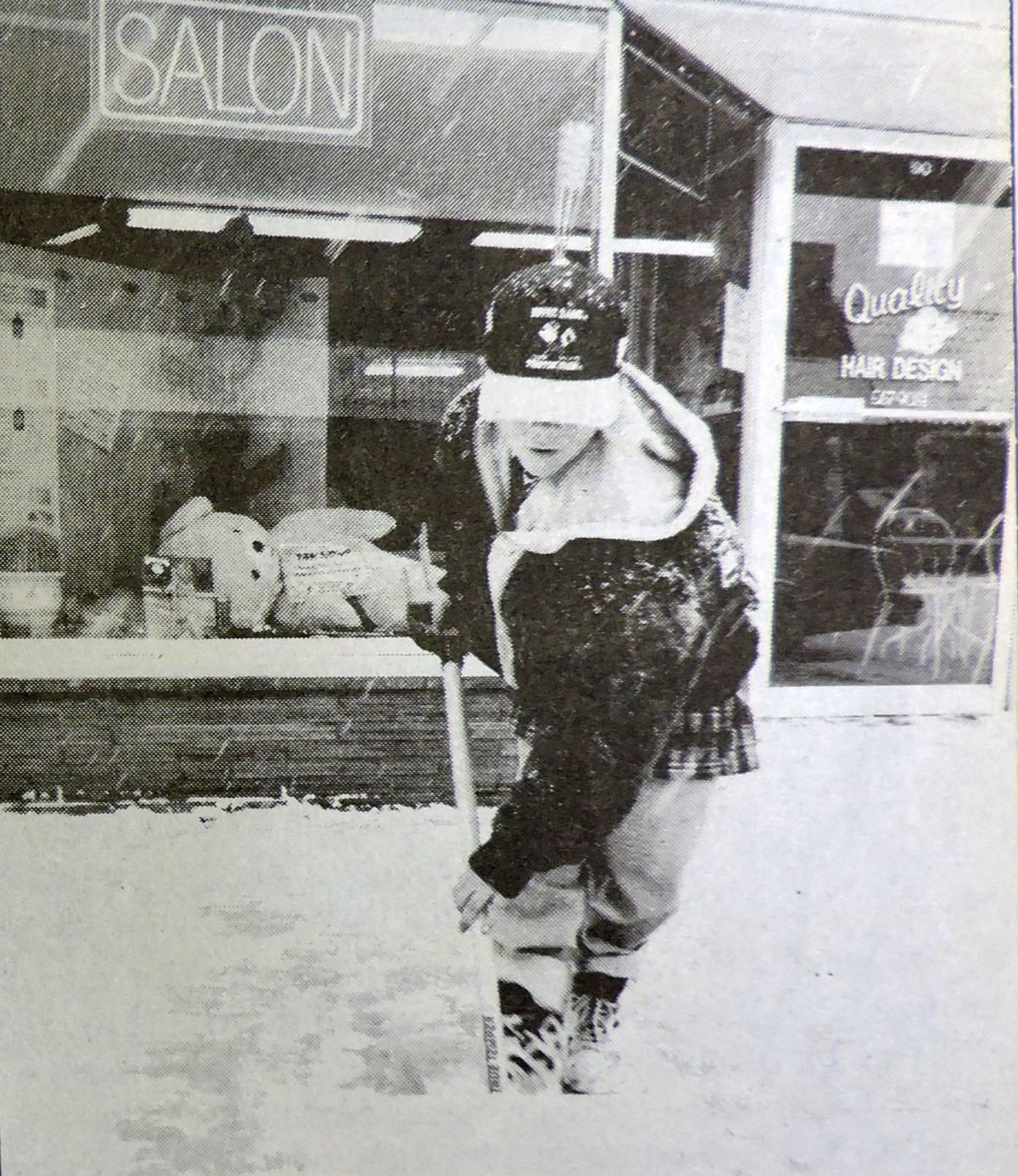 Dustin Coughlin, 9, puts time allowed by a Hermiston schools’ late start to good use by helping Quality Hair Design on Main Street dig out from a snowstorm in 1995. 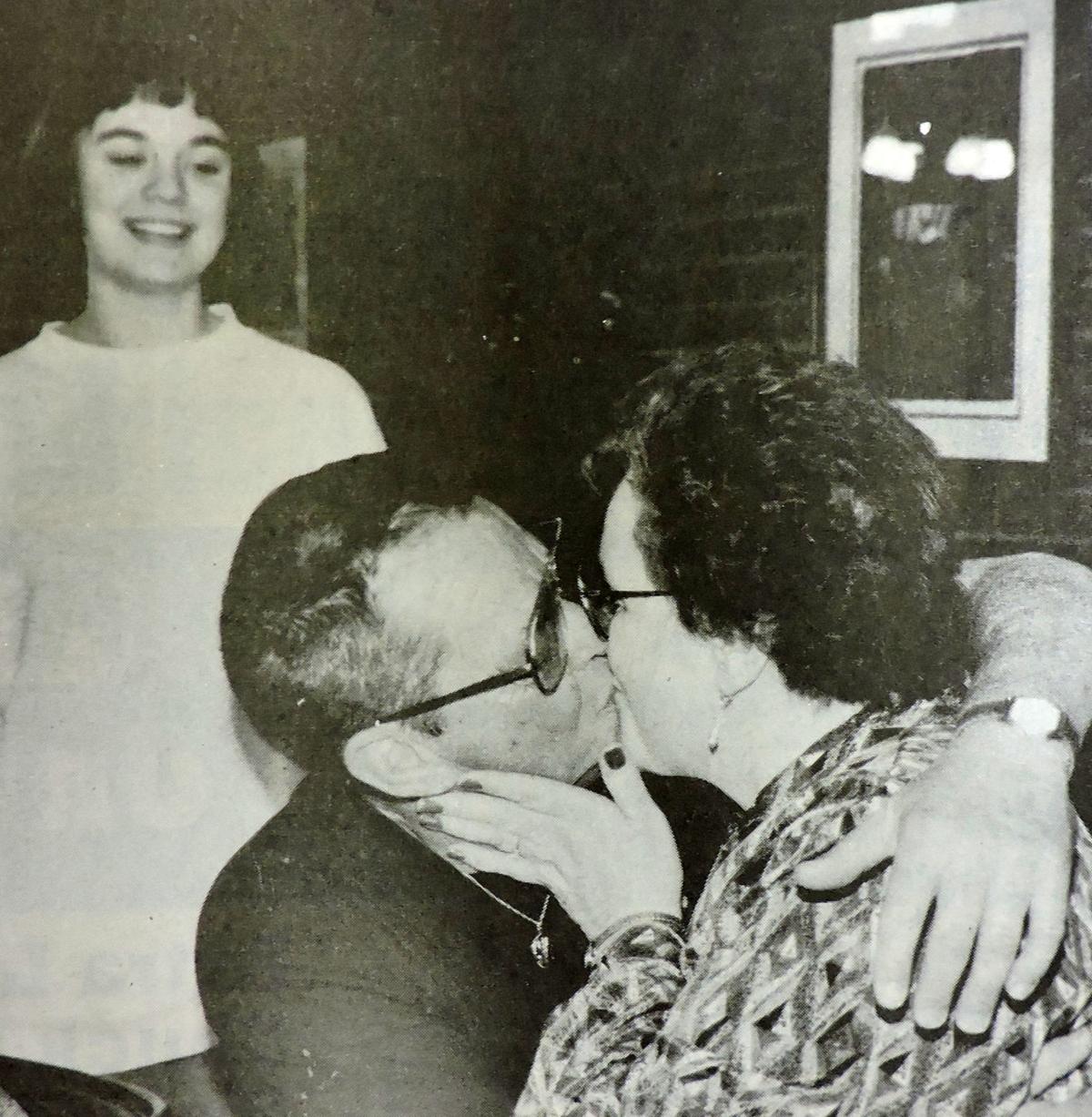 Barbara Tipton and Harvey Jinks kiss while Audrey Floyd and other members of Hermiston choirs give them a singing telagram for Valentine’s Day in 1995.

Dustin Coughlin, 9, puts time allowed by a Hermiston schools’ late start to good use by helping Quality Hair Design on Main Street dig out from a snowstorm in 1995.

Barbara Tipton and Harvey Jinks kiss while Audrey Floyd and other members of Hermiston choirs give them a singing telagram for Valentine’s Day in 1995.

The Greater Hermiston Chamber of Commerce will likely take on day-to-day management of the Hermiston Community Center.

The Hermiston City Council unanimously approved a management contract with the chamber last night. The chamber’s board of directors will probably give its approval of the arrangement today.

“It’s good to have two entities that can work together instead of hiring an outside private outfit,” councilor Mike Boise said in support of the agreement, which will run until the end of June 1996.

As manager of the center, the chamber will maintain its offices in the building. It will be responsible for marketing, schedule, maintaining and overseeing the finances generated by the center.

Treasure hunters who have been visiting the “happy hunting grounds” near Umatilla will have to stop digging for artifacts. The Corps of Engineers have put a ban on further digging in the area.

Persons from both Oregon and Washington have done extensive digging around the Umatilla where it is believed that an Indian village once stood The diggers have not covered their holes, resulting in a danger to people walking in the area.

In addition, damage has resulted to many of the trees in the area, because of their roots being chopped off, ruining the scenic value for people picnicking.

2) Food poisoning in the form of botulism brought death to nine-year-old Connie Schultz on Thursday and hospitalized four other members of her Hermiston family.

Herman Schultz, 39, and his wife Phyllis, 34, and two other children were rushed to Kadlec Methodist Hospital in Richland following Connie’s death at Good Shepherd Hospital here.

The parents were listed in critical condition last Friday but are reported to be responding to anti-toxin treatment. David, 4, and Darrell, 7, are reported to be in good condition. A fourth child, Craig, aged eight months, is presumed to be not exposed to the disease due to his age.

Hospital diagnosis indicated botulism as the cause of death and Dr. Milton Johnson, Hermiston physician, reported that one of the symptoms young Connie was suffering from was blindness. Other botulism symptoms are convulsions, coma and sudden paralysis.

Exact cause of the poisoning was under investigation by Umatilla County sanitarian C. Evan Dillon. Reports said it was believed that home canned vegetables were the cause.

Considerable excitement prevailed at the Frank Sargent place a mile north of town Wednesday when workmen who were plowing and leveling the field unearthed a package of yellow material. Upon examination, it was discovered that it was a brick of butter wrapped in strong paper which had deteriorated considerably.

Mr. Sargent took the package to the Umatilla Cooperative Creamery where it was examined by Herman Plass, manager. He believed it was homemade butter and might have been buried quite some time.

One thing is certain, however, either the butter was buried prior to rationing or someone should have his head examined for burying butter these days.

Even though there were not many rabbits slaughtered at the big rabbit drive last Sunday that was participated in by approximately 300 people, everyone had bushels of fun during the cross country run and at the finish of the hunt.

The day was ideal for such a joyous gathering, the weather being just right, with Old Sol shedding a radiance of good cheer over the multitude armed with clubs after having remained in hiding for so long.

On converging of the four wings of the drivers coming from the north, east, south and west, it was discernible that in the vortex thus created there were hundreds of rabbits, but for some unaccountable reason they disappeared as the wings closed in on them. Of course, there were many animals killed as they endeavored to escape through the lines, but the finish at the wire enclosure was not as exciting or successful as had been anticipated by the hunters or promoters.