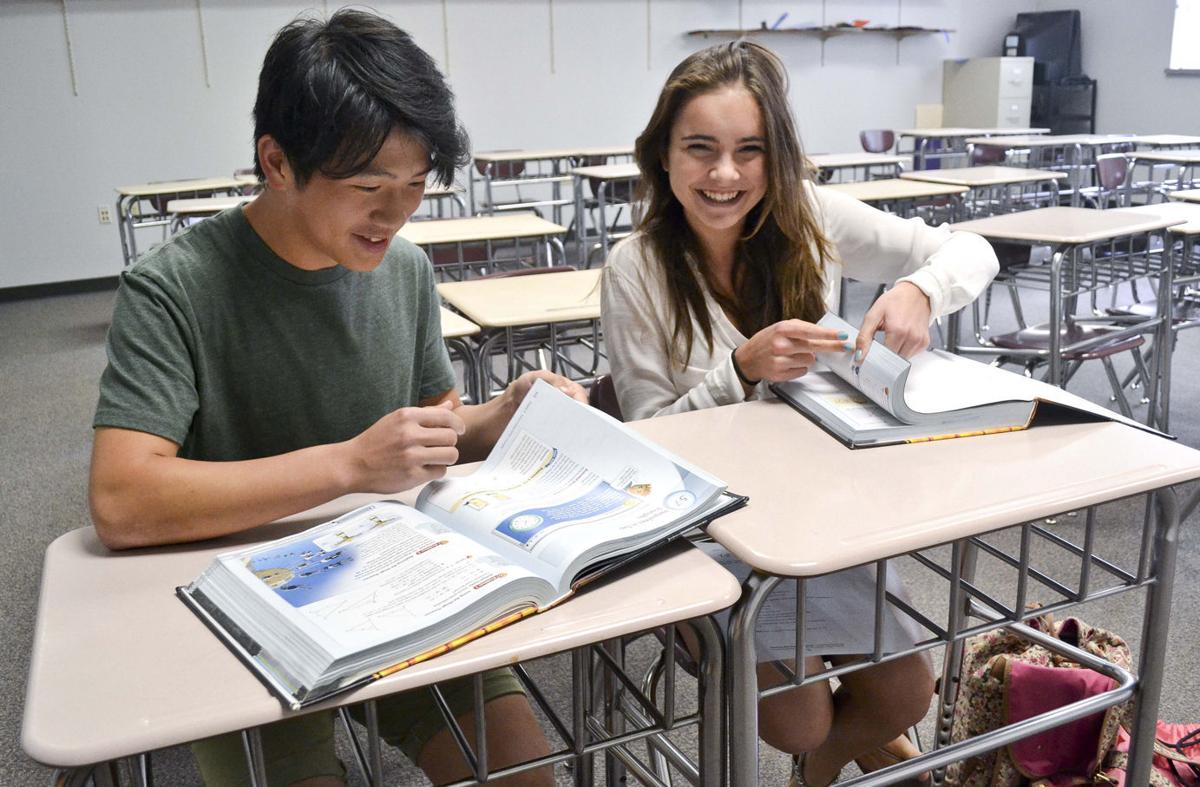 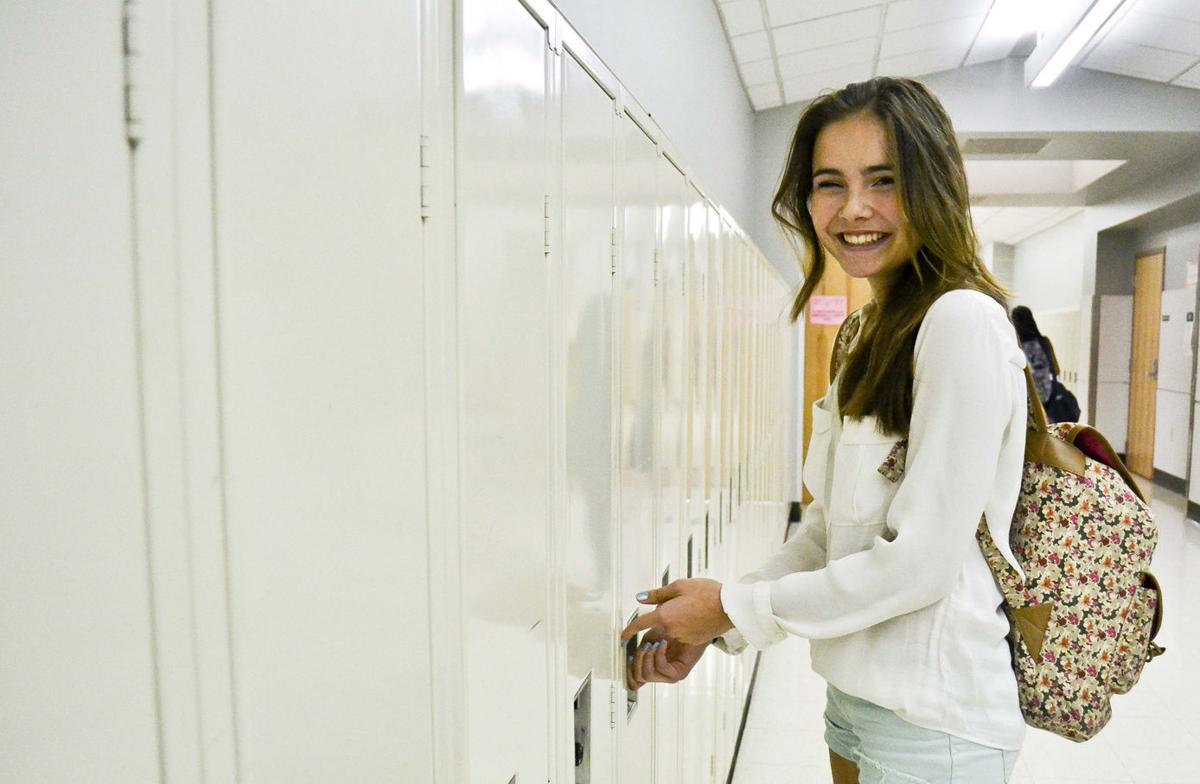 <p>Franziska Katterbauer, a foreign exchange student at Hermiston High School, poses for a photo near a set of school lockers Monday afternoon at the school.</p>

<p>Franziska Katterbauer, a foreign exchange student at Hermiston High School, poses for a photo near a set of school lockers Monday afternoon at the school.</p>

While their peers were catching up with their friends and preparing for another year of school, Nick Wang and Franziska Katterbauer were busy getting their bearings about life and education in the United States.

Katterbauer said she was presented with the opportunity through Rotary International and was asked by her grandfather, a participating Rotary member in Austria, if she would like to travel to the United States as part of a foreign exchange program.

I decided to try it, she said.

For Wang, he said his English teacher back in Italy told his class about the chance to study abroad in an English-speaking country such as the United States or England, and he decided to pursue an opportunity in America.

It was something new I could experience, he said. I had never been (to the United States before).

Both said they knew they were going to a small town in Oregon prior to arrival, but they didnt know much about the area, let alone small-town America, other than what they had seen in the movies and on television.

I knew about some states, but I didnt know anything about Oregon or Hermiston, Katterbauer said.

Regardless of their expectations, however, both said they are enjoying life in Hermiston so far, even though they have only been here a couple of weeks.

Both said life in the United States, or at least in Hermiston, is almost exactly what they hoped to experience. Katterbauer said while Hermiston High School lives up to the social aspects, she said the educational opportunities also excite her, including being able to choose what she wants to study at Hermiston High School.

Katterbauer said, in Austria, students are given a collection of classes they must take each year in Gymnasium, the equivalent of high school. Those courses include German, their native course that is similar to English or language arts classes in the United States, and specific math, science and history classes. Katterbauer said at her school, which is similar to a performing arts school in the United States, she is also required to take a selection of arts classes that specialize in a certain field, such as painting, drama or choir.

Katterbauer said she appreciates being able to choose her courses in Hermiston, based on interest and level of rigor of study.

I really like that, she said. It gives you freedom to do what you want. We dont have that back in Austria.

Katterbauer said the school setting and structure is also very different. First, she said, in Austria, the teachers move to different classrooms, not the students. She said at home, she stays in one classroom all day.

She said, although her school in Austria has the same number of students, Hermiston High School is a much larger building, to which she is not accustomed.

Its huge, she said. The first day, I kept having to ask people where to go, where my classes are  I am still doing that now. You think I would remember, but I forget.

Wang said school in Italy is also quite different. First, he said, high school is five years long instead of four, and he appreciates that high school students in the U.S. only have to attend for four years.

Wang said high school students in Italy also attend school on Saturdays. He said students attend school until approximately 1 p.m. each day. The school buildings are also much older, and students dont have access to the same types of modern technology available to students in Hermiston, he said.

Both Wang and Katterbauer said their classes are also much more rigorous in their home countries, and they are largely lecture-based, leaving little room for any kind of discussion.

We dont discuss like they do here, Wang said. I like that exchange of ideas here. In Italy, the teacher just stands at the front of the class and just talks.

In addition to their regular classes, Wang and Katterbauer are also competing in the sports they participated in back home. Katterbauer said she didnt realize, however, how competitive sports are in the United States.

Katterbauer said she is on a community volleyball club team back home, as all sports teams are run in a club-type setting, but sports are taken a lot less seriously.

Everyone on the team here is so good, she said.

Wang is competing on the soccer team, which is called football in Italy. He said, while it is a very popular and competitive sport back in Italy, soccer is still taken a lot more seriously in Hermiston. In addition, he said the athletic facilities in Italy are not as good as those in Hermiston.

Just look at the field here, he said, referring to Kennison Field. We would never have anything like that.

Both students said they have also noticed little differences, as well.

Katterbauer said she noticed Americans usually get their own first car when they turn 16. Back in Austria, however, students travel by bike or moped and few get their own car that young. She said the Austrian equivalent of a car for teens is a moped, for which they have to obtain a license to drive.

Katterbauer said she realizes people need to own cars in the United States as everything is so spread out, but that it is still something so different to her.

Wang said one small thing he finds amusing is the slang terms he thought would be popular in America are used sparingly or not at all, such as the word cool. One of the Italian equivalents of cool is the word polleg, which has no meaning in the United States.

Wang and Katterbauer both said they miss the food in their home countries. They said, in Hermiston, during lunch, basically their only options for fast meals are fast food. Katterbauer said her host family cooks healthy meals regularly, but that is still something she misses from back home.

Wang and Katterbauer said they look forward to the rest of their year in Hermiston, and both hope to make small trips to Portland and have already visited other places in the region, such as Seattle and Spokane and Coeur dAlene, Idaho.

I really like it here, Katterbauer said. Everybody wants to meet you or know you because you are a foreign exchange student, and that is something I have really enjoyed. I have enjoyed meeting new people and getting to know Hermiston.

Wang agreed and said he wants to pick up more about the American culture.

At the end of the year, Wang and Katterbauer are invited to graduation.