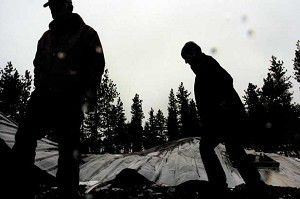 Carl and Jef Glenn are silhouetted before the remains of their old house that burned to the ground in Meacham.<BR><I>Staff Photo by Brenna E. Chapman </i> 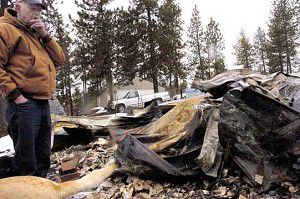 Still emotional from the loss of his home, Carl Glenn smokes a cigarette beside the burnt remains of his home in Meacham. The dogs were able to escape the blaze because of a doggie door. “This is home,” Carl said. “ This is where we want to be; we’ll rebuild.”<BR><I>Staff Photo by Brenna E. Chapman </i>

Carl and Jef Glenn are silhouetted before the remains of their old house that burned to the ground in Meacham.<BR><I>Staff Photo by Brenna E. Chapman </i>

Still emotional from the loss of his home, Carl Glenn smokes a cigarette beside the burnt remains of his home in Meacham. The dogs were able to escape the blaze because of a doggie door. “This is home,” Carl said. “ This is where we want to be; we’ll rebuild.”<BR><I>Staff Photo by Brenna E. Chapman </i>

Carl Glenn and his wife, Jef, love living in the woods around Meacham. It's a life they've chosen and a life they won't give up, no matter what.

Not even when their house burned to the ground.

"That was the dream, to live in the mountains," Jef said.

Carl and Jef were in the Portland area on the Valentine's Day weekend - Carl in Portland visiting family and Jef in Molalla taking care of her 80-year-old mother - when they received a call around 3 a.m. Sunday morning.

Their neighbor, Rolland Reynolds, had gotten up to go to the bathroom. Reynolds said he couldn't see the house from his line of sight, but he could see the fire.

Jef said in some ways, she was glad she wasn't around to watch the house burn. Visualizing it in her mind was enough.

Reynolds also called Meacham Rural Fire Chief Wayne McEntire. McEntire said he received a call around 2:30 a.m. and headed out to the house, but there was nothing he could do.

"The house was completely on the ground," he said. "When it's down that far there's no sense of putting it out because it makes more of a mess for you to clean up."

The fire was contained by the snow surrounding it.

McEntire rounded up the Glenn's two dogs, Blondie and Jade, and put them inside Carl's machine shop, where they waited for Carl to come home later that morning.

Carl headed for Meacham from Portland as soon as he could after he received the call. He said he arrived around 8 a.m. Sunday morning. The house was flat and smoldering.

Deputy State Fire Marshall Scott Goff investigated the fire and said it was pretty much conclusive - a heater at the back of the house had malfunctioned and caused the fire.

"Looking at the way the structure had collapsed, the indications were that it had failed sideways near the rear of the house," he said. "In that area I found an electric wall-mounted heater that showed indications of possible electrical failure."

Unlike in other cases he's investigated, the Glenns didn't have flammable materials near the heater. In two other cases Goff investigated last week - one in Joseph and one in La Grande - people had left items too close to heaters and they had caught fire.

"In this case it appears the appliance itself failed and most likely ignited the combustible portions of the house around where it was mounted," he said.

One member of the household is still unaccounted for: Houdini, the cat. Jef and Carl are still holding out hope the cat escaped the fire and just hasn't made it home yet.

They also own two horses, Shilo and Cheyenne, who were safe and well away from the fire.

The Glenns have owned and property since the mid-90s, when Jef said it had nothing more than an old cabin.

Carl Glenn holds open the door of the trailer to let the dogs in. Since the fire, the Glenn's have been living full-time in the trailer. "You just go on," said Carl. " That's all you can do."Staff Photo by Brenna E. Chapman "You could see through the walls, but it had a stove," she said proudly.

While they lived in Stanfield, they worked on the cabin, slowly turning it into a home. They built on a hallway, bathroom and laundry room and improved the rest of the house.

"We worked on it over the years," Carl said. "A lot of family and friends helped."

Then about a decade ago, they moved into the 900-square-foot cabin. Carl was retired from the railroad and Jef worked as a bartender at The Saddle in Pendleton until she retired last August.

One thing they loved to do was watch wildlife from their home. Jef said she'd watched elk, deer, wild turkeys and squirrels. They once saw a mountain lion kitten running around playing with a butterfly, just like a house cat.

Jef said they feel they have to fit into the woods, not the other way around. They find a way to take care of what's around them. As Jef put it, they plant trees, they don't cut them down.

"Fit in and not interfere," she said, "respect of the land, keep it as it is."

That's why, when their house burned down, they didn't want to leave it. They said the insurance company offered to put them up in hotels or find another place to live, but they would have none of it.

Since the fire, they've been living in the fifth-wheel they own and use on vacations, hunting trips and when family comes to visit them in Meacham.

But despite all the loss, Jef keeps a positive attitude for the future.

"Either you can do a complete meltdown and crawl in a corner or you can get organized and get on," she said.

Since the fire they said friends and family have lent a big hand. Several neighbors offered to let them stay at their houses.

From here, they plan to rebuild in the summer on pretty much the same place where the rubble from their old home still sits. Though, Jef noted, it might be a bit bigger, and Carl said they might move it a little to the south to get the best view of the mountains.