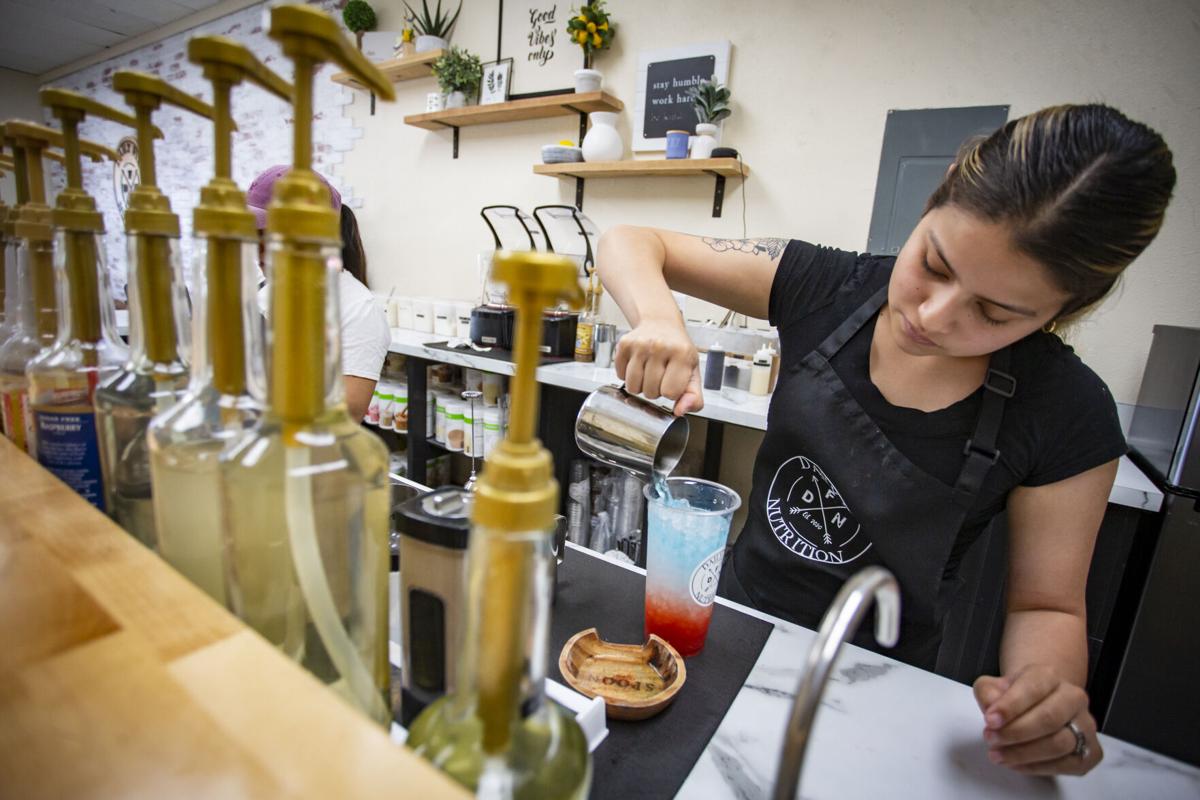 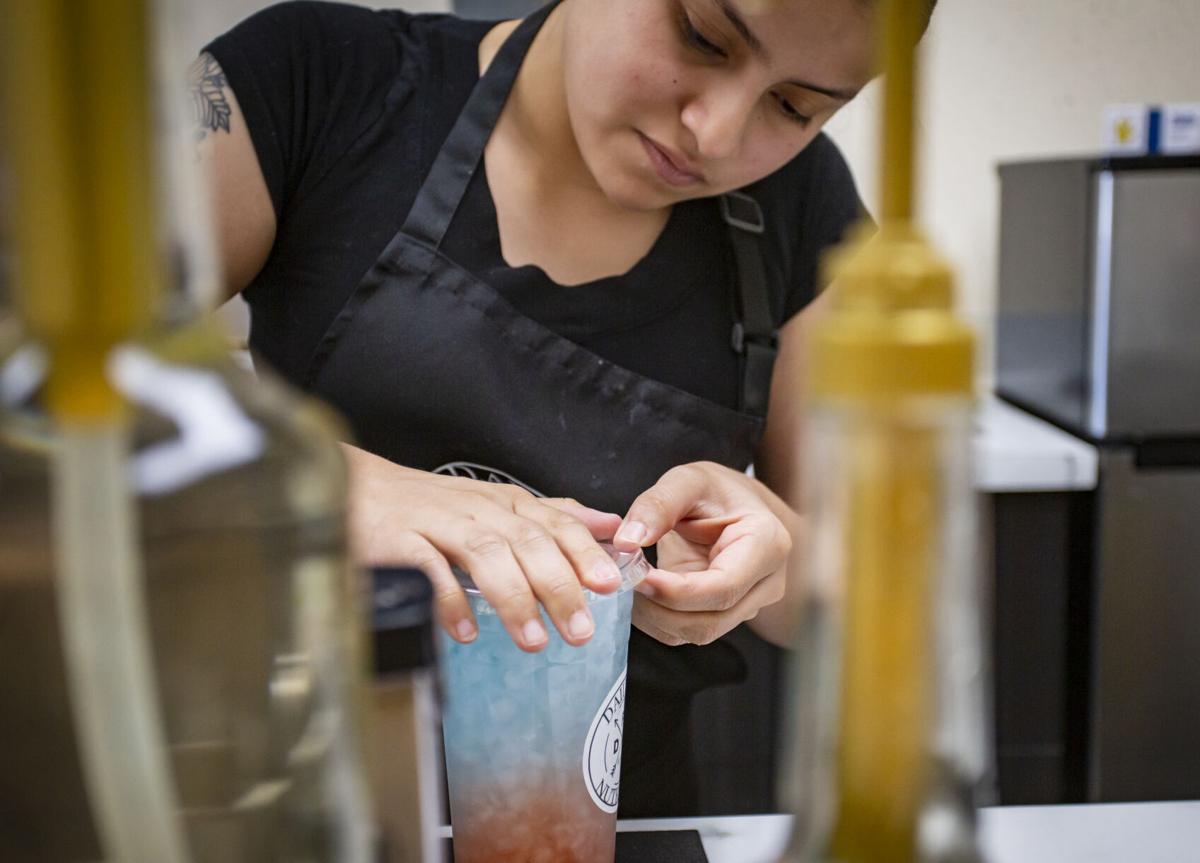 Elizabeth Stuart-Ramirez affixes the lid to a to-go cup Thursday, June 17, 2021, after preparing a drink at Daily Fix Nutrition in Hermiston. 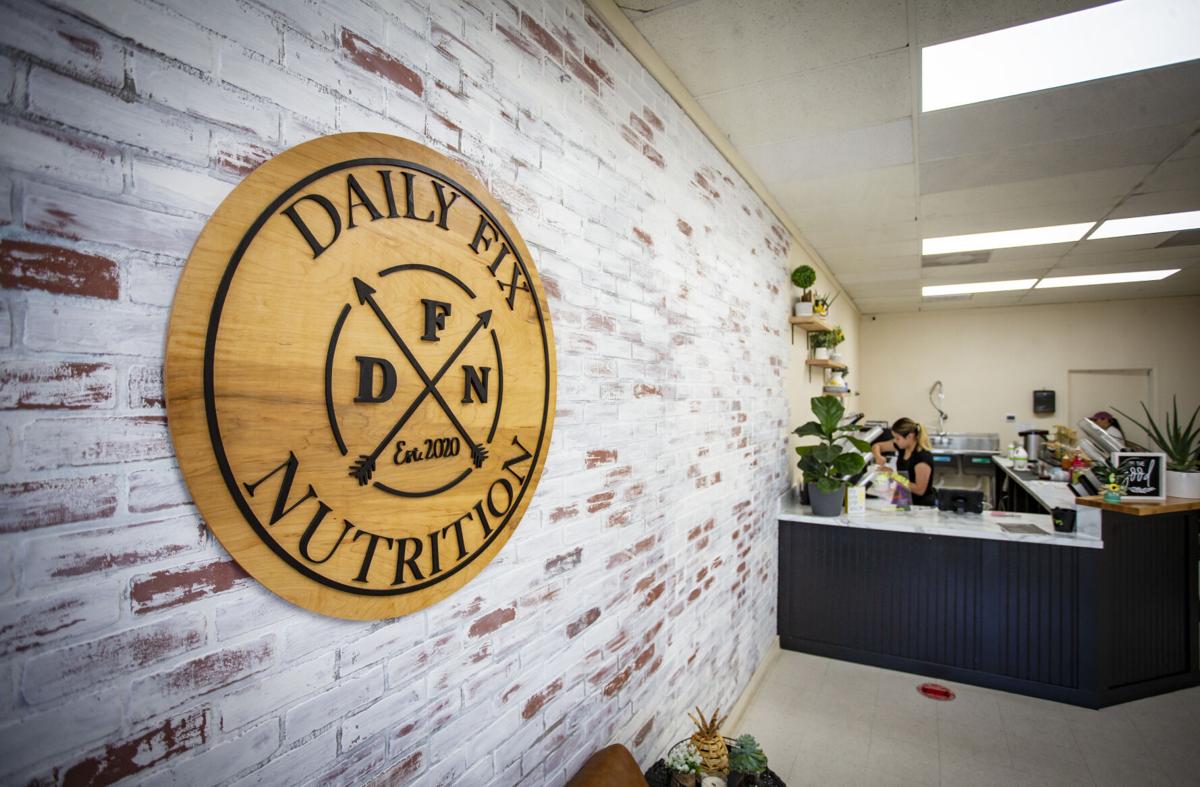 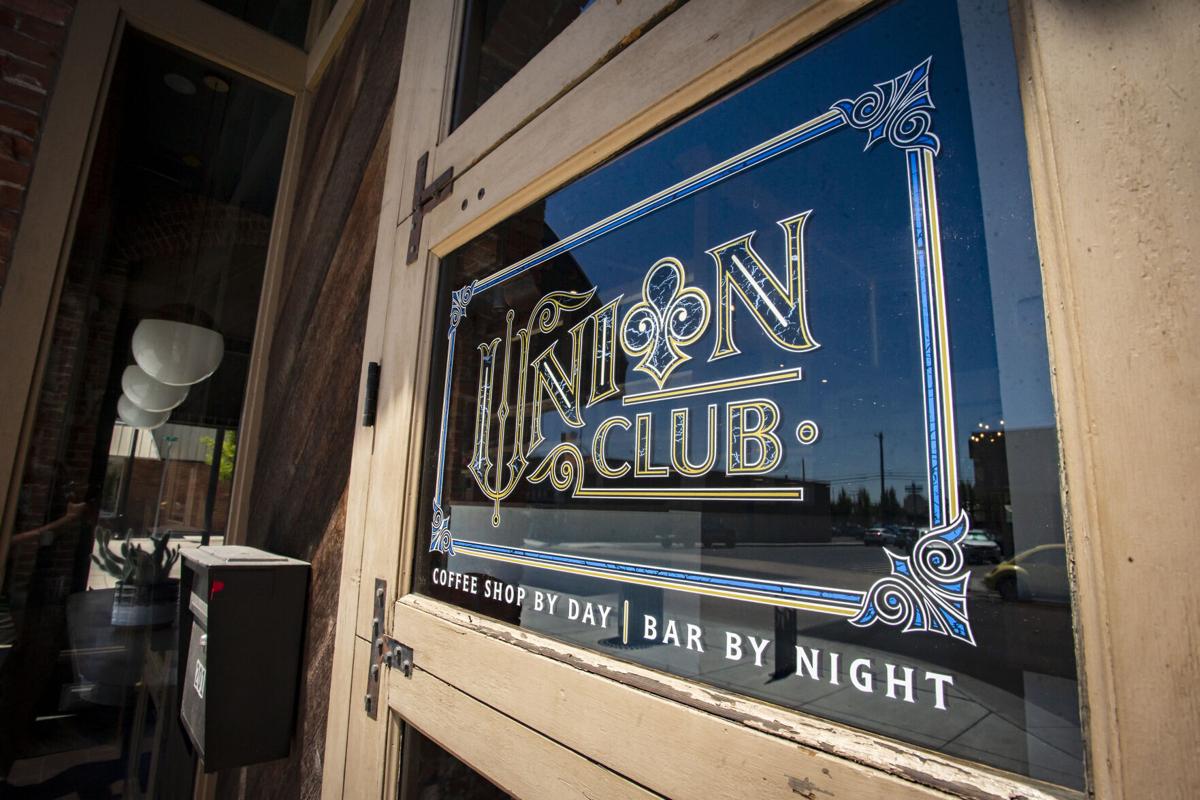 Signage for the Union Club remains on the door Thursday, June 17, 2021, at the eatery’s former location in downtown Hermiston. Pendleton-based OMG! Burgers & Brew has taken over the building with plans to open a Hermiston location. 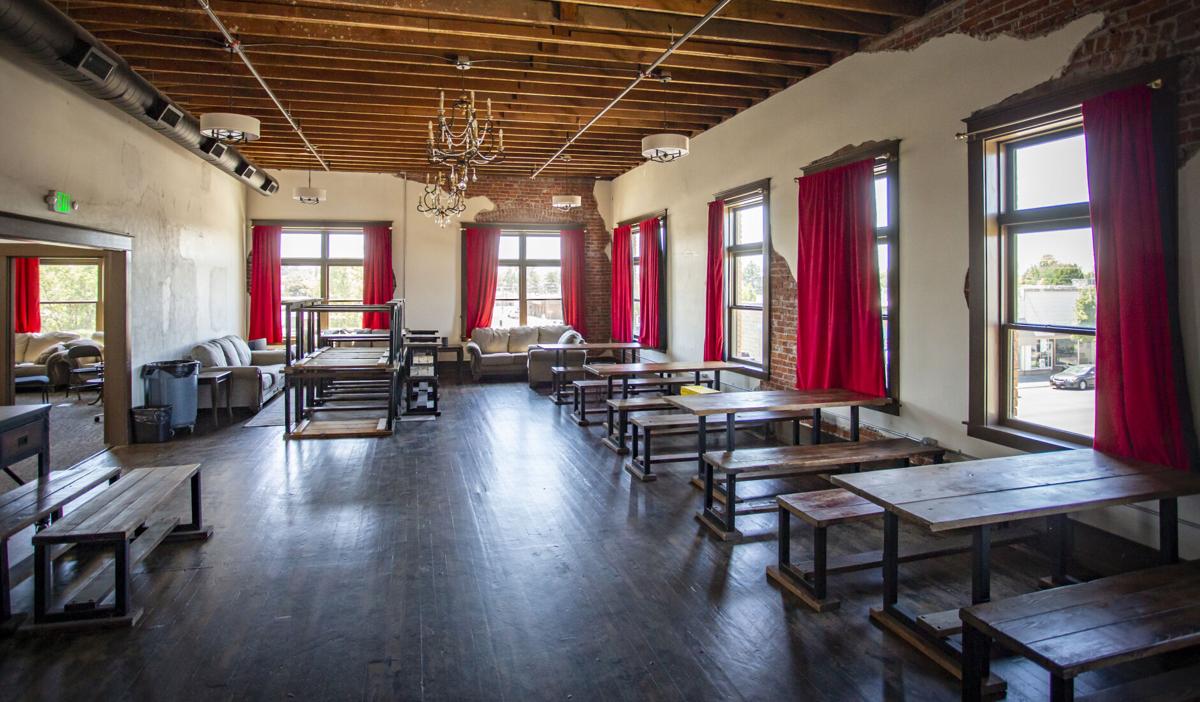 The upstairs dining room at the former Union Club building in Hermiston sits empty Thursday, June 17, 2021, as OMG! Burgers & Brew prepares to convert the space to a new location for the Pendleton-based eatery.

Elizabeth Stuart-Ramirez affixes the lid to a to-go cup Thursday, June 17, 2021, after preparing a drink at Daily Fix Nutrition in Hermiston.

Signage for the Union Club remains on the door Thursday, June 17, 2021, at the eatery’s former location in downtown Hermiston. Pendleton-based OMG! Burgers & Brew has taken over the building with plans to open a Hermiston location.

The upstairs dining room at the former Union Club building in Hermiston sits empty Thursday, June 17, 2021, as OMG! Burgers & Brew prepares to convert the space to a new location for the Pendleton-based eatery.

The state of Oregon still considers Umatilla County high risk for COVID-19, but some business owners see the county’s economy as less risky.

After a tough year for OMG! Burgers and Brews in Pendleton, business is now booming for the three-year-old burger joint — so much so, that owners Rodney and Kimberly Burt are opening up a new OMG! Burgers location in Hermiston.

Rodney Burt said the new location will look the same as the Pendleton one, featuring a menu of appetizers, salads, hot dogs, chicken sandwiches, alcoholic beverages and “about 20 different types of crazy hamburgers.” The restaurant is set to open sometime in mid-July, in the former Union Club building at 201 E Main St.

“I think what will set us apart is that we use the best beef you can get, all local from around Pendleton and Hermiston — fresh, never frozen, no antibiotics — with fresh-baked buns, and produce as fresh as we can get them,” he said.

Pandemic restrictions took their toll on OMG! Burgers in Pendleton like everywhere else, Burt said. The couple were planning to open a grilled cheese shop in Pendleton in 2020, but COVID-19 scrapped those plans. Lately, however, Burt said OMG! Burgers has had its busiest time ever, helping them feel confident in taking the plunge in Hermiston.

Diana Pena, who opened the shop with her husband, Felipe Pena, said they were looking at the 11th Street location they settled in before the pandemic started, but the shutdowns and uncertainty caused them to pull back for a while before finally “taking a leap of faith” this spring.

“It’s definitely scary, because you see so many businesses struggling,” she said.

Pena graduated from Umatilla and her husband graduated from Stanfield, so they “met in the middle” to live in Hermiston after getting married. She said she has been using Herbalife Nutrition products for about seven years, and eventually started selling them to other people. Now, Daily Fix Nutrition sells all Herbalife products, including meal replacement shakes.

“We wanted to bring something healthy and new to the community,” she said.

Hermiston has a few more new developments in the restaurant industry coming up, including “new and exciting changes” promised by Ye Olde Pizza Shoppe, which has used the pandemic shutdowns to renovate its space on North First Street.

Area residents can also expect more food truck options soon after a renovation of the city’s Orchard Avenue food truck pod that will take place next month, adding utility hookups for truck owners who have said they would be happy to join the pod if they could have access to water and sewer.

Delish Bistro is moving down the road, from a location that only allowed for outdoor seating to a full sit-down restaurant location at 1619 N. First St. They hope to open by the end of the month.

A smoothie shop called Get Fit Nutrition will open soon in the former Yo Country Yogurt building on the corner of Hurlburt Avenue and Southeast Third Street. Owner Laura Rivera said she wanted to open it not only to provide healthy options for the community, but also to provide a “cool place where people can hang out, get distracted and forget about this pandemic that it’s affecting all of us.”

She doesn’t yet know exactly when she will be able to open, because she is waiting on an inspection from the health department.

That’s a common refrain from local restaurant owners who aren’t ready to announce an opening date yet.

Burt said OMG! Burgers is hoping to open their Hermiston location in mid-July, but that will all depend on how quickly they are able to hire enough staff, and how quickly they can get the green light from Umatilla County Public Health. Every day they can’t check off those items is revenue lost, he said.

Umatilla County Public Health Director Joe Fiumara acknowledged that waits for food service plan reviews have been longer than usual for the past year.

That hasn’t been because of more requests from restaurants than normal, he said, but rather that staff have been far more busy with other things, including vaccinations and reviewing plans for events to see if they meet the criteria for COVID-19 protocols.

“A lot of that fell to the environmental health folks,” Fiumara said.

He said when it came to choosing between sending environmental health staff to a restaurant or staffing a vaccination clinic, he chose the latter, knowing that the more quickly Umatilla County residents were protected by vaccines, the sooner the economy could safely reopen.

While Umatilla County was in what was first known as baseline and later changed to extreme risk — for more days than any other county in the state, thanks to its high spread of COVID-19 — the health department wasn’t allowed by the state to do on-site inspections at all unless responding to a complaint. That not only hindered inspections, but also made it difficult to get a new environmental health staff member trained.

“So many restaurants were forced into new methods of operation, but at the same time, we were not allowed to do inspections,” Fiumara said.

He said the number for 2020 might not show the whole picture — several of those were before the pandemic began, and there is no guarantee all of the sites that submitted plans for review actually opened. He also noted that 2020 saw an unusually high percentage of reviews go to mobile units, as some owners tried to pivot away from indoor dining.

Fiumara said the health department is advertising for another environmental health position and also has brought back an environmental health supervisor position previously cut, which, once everything is in place, will boost the number of people able to handle site plan reviews and inspections.

There is other good news for restaurant owners opening now, as well. When the health department has been using environmental health staff for vaccination events and other duties, they have been paying them from a different pool of money than what the county sets aside for environmental health. As a result of those savings to that department budget, Fiumara said, they have temporarily reduced all licensed facility fees by 40%.

“We knew (the fees) wouldn’t be something that will make or break an operation over a year, but it’s something we could do, so we felt we needed it,” he said.