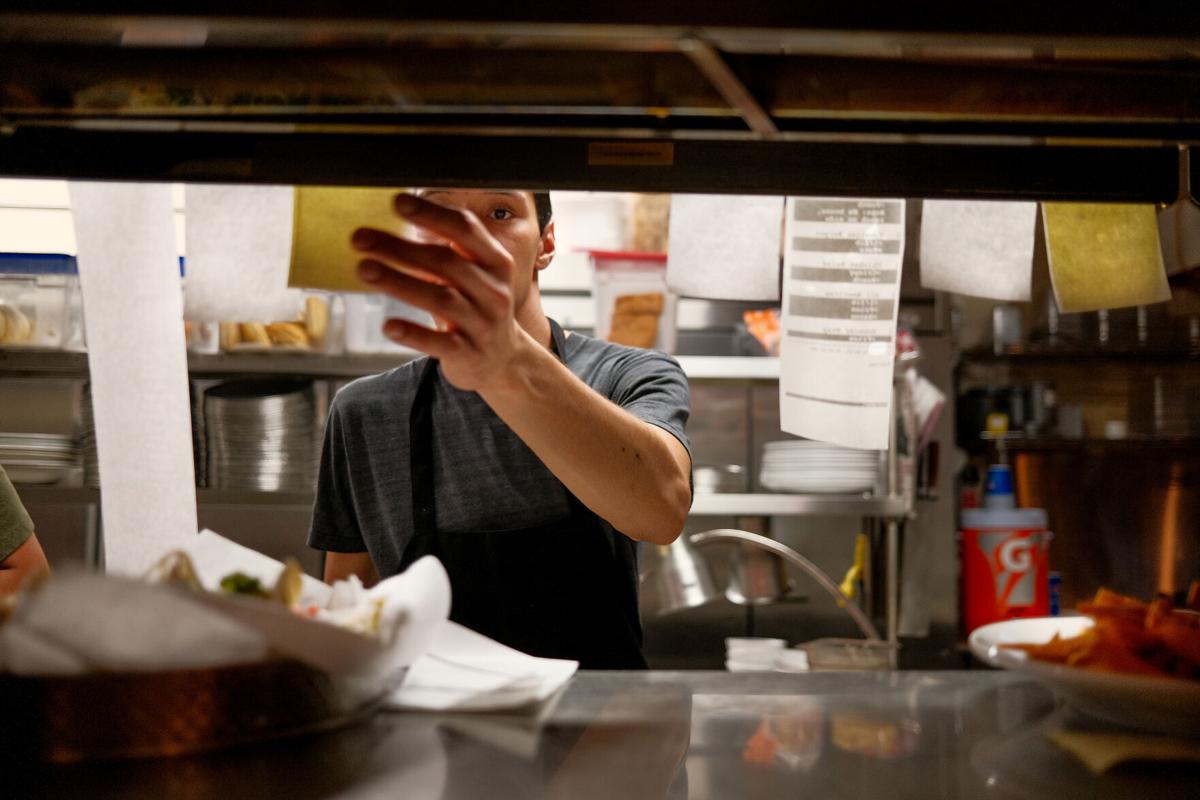 Head chef Trevor Olson looks through the line of orders June 26, 2021, during his shift at Nookie’s Restaurant & Brewery in Hermiston. Nearly every company in Eastern Oregon is looking for workers, but the restaurant industry is the most visible indication of the labor shortage, with many kitchens having overworked staff pushed to their limits. 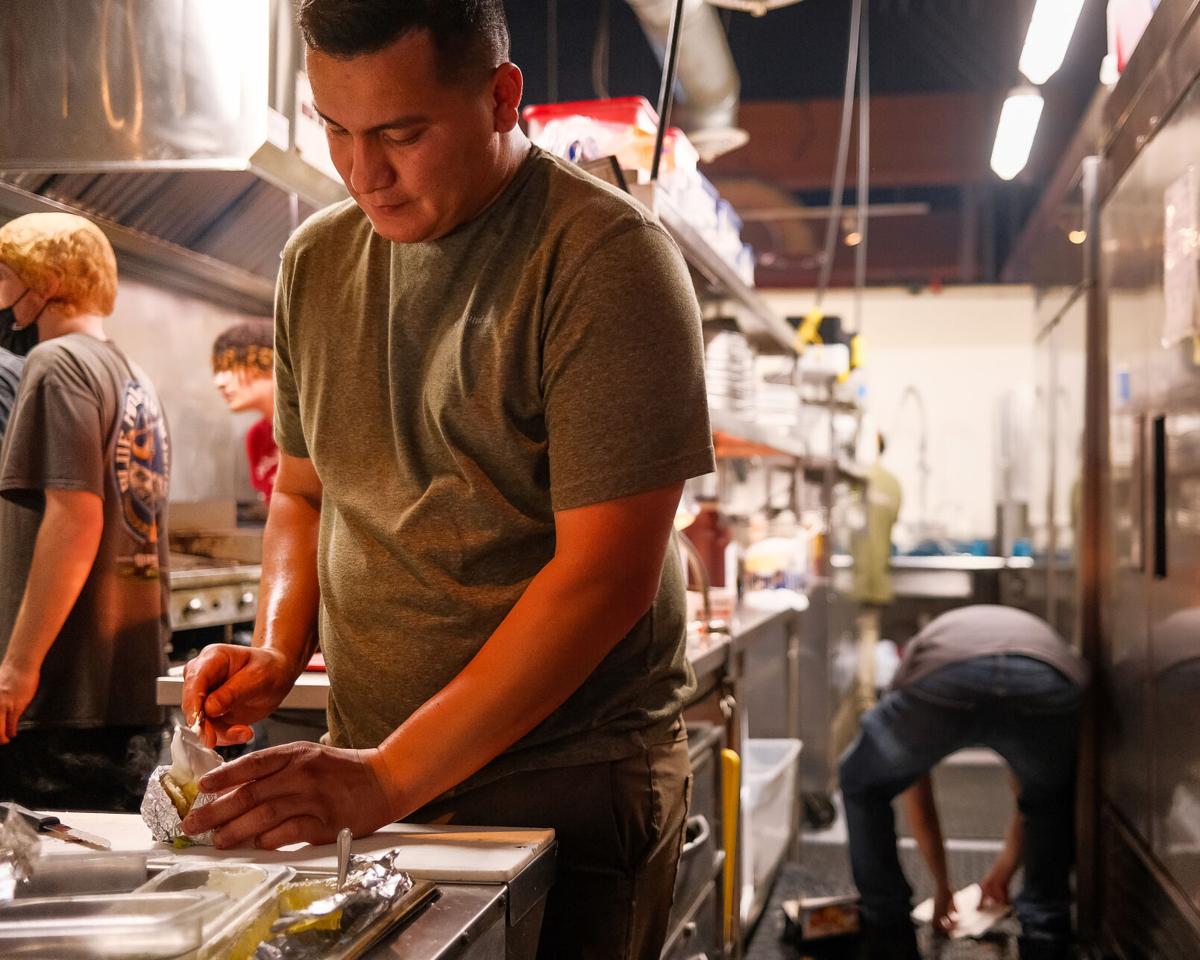 Lupe Delgado finishes up a side dish June 26, 2021, at Nookie's Restaurant & Brewery in Hermiston. Staff in the restaurant’s kitchen have been pushing overtime for months, and a worker shortage has drastically changed the demographic of the cook staff, where many of the workers are under 20 years old. 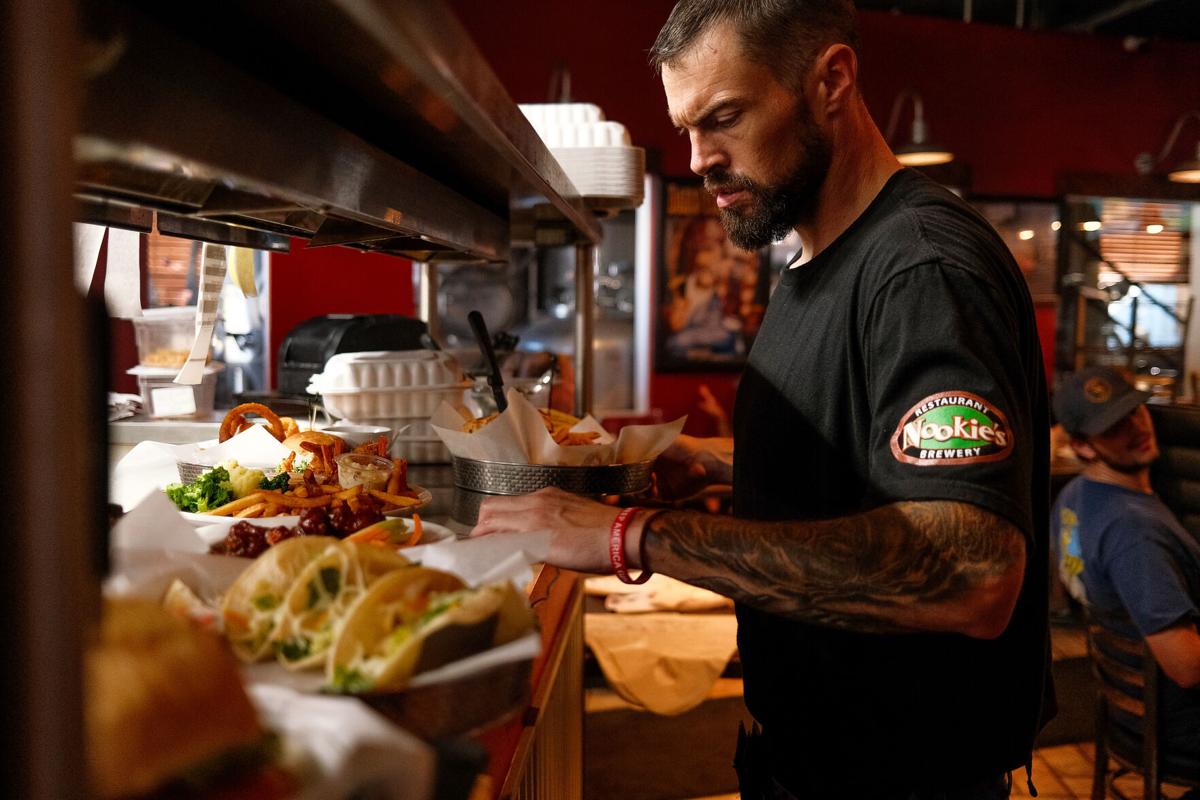 Sean Altizer, a server at Nookie’s Restaurant & Brewery in Hermiston, looks through orders Saturday, June 26, 2021, at the kitchen window. According to the managers, the restaurant had just finished staffing their wait staff, though the kitchen remains sorely understaffed, with nearly every cook working overtime. 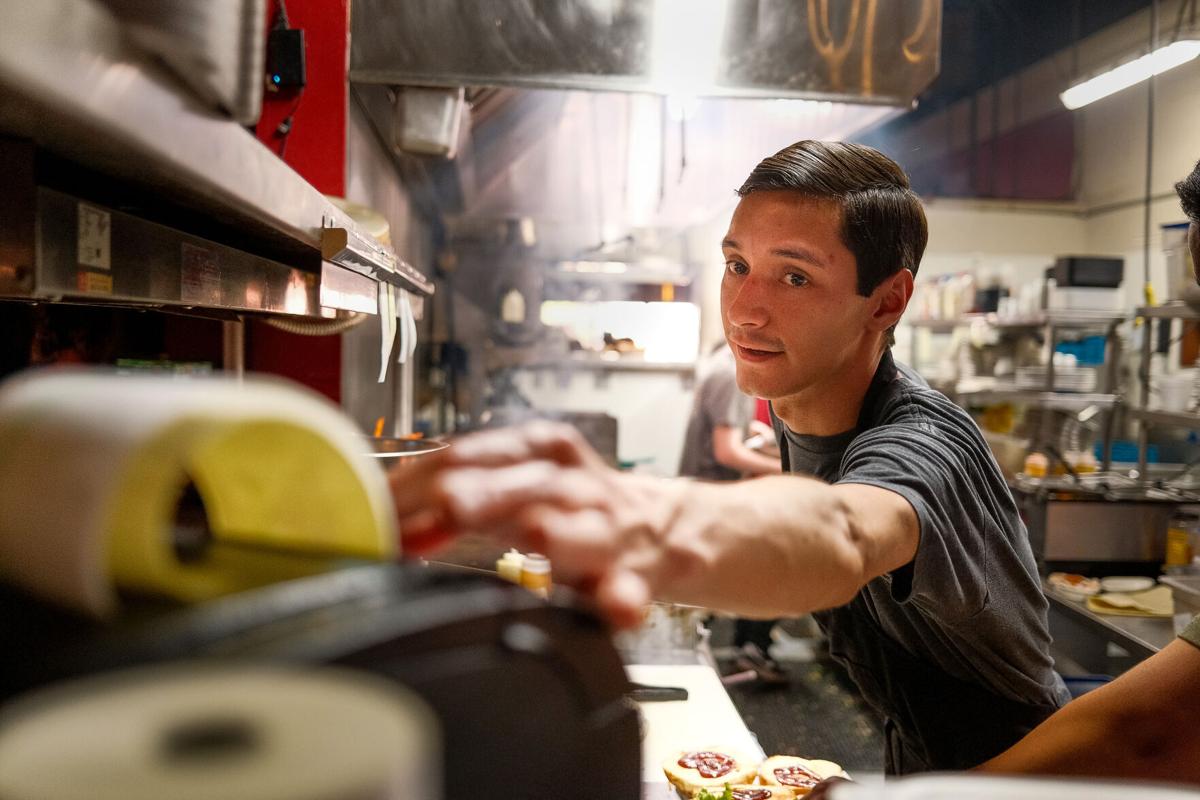 Trevor Olson reaches for a newly printed ticket order June 26, 2021, at Nookie's Restaurant & Brewery in Hermiston. As tickets pour in, so does the stress of running an understaffed kitchen. Restaurants across Eastern Oregon have struggled to fill vacancies after the government eased restrictions on dining and restaurants earlier this year. 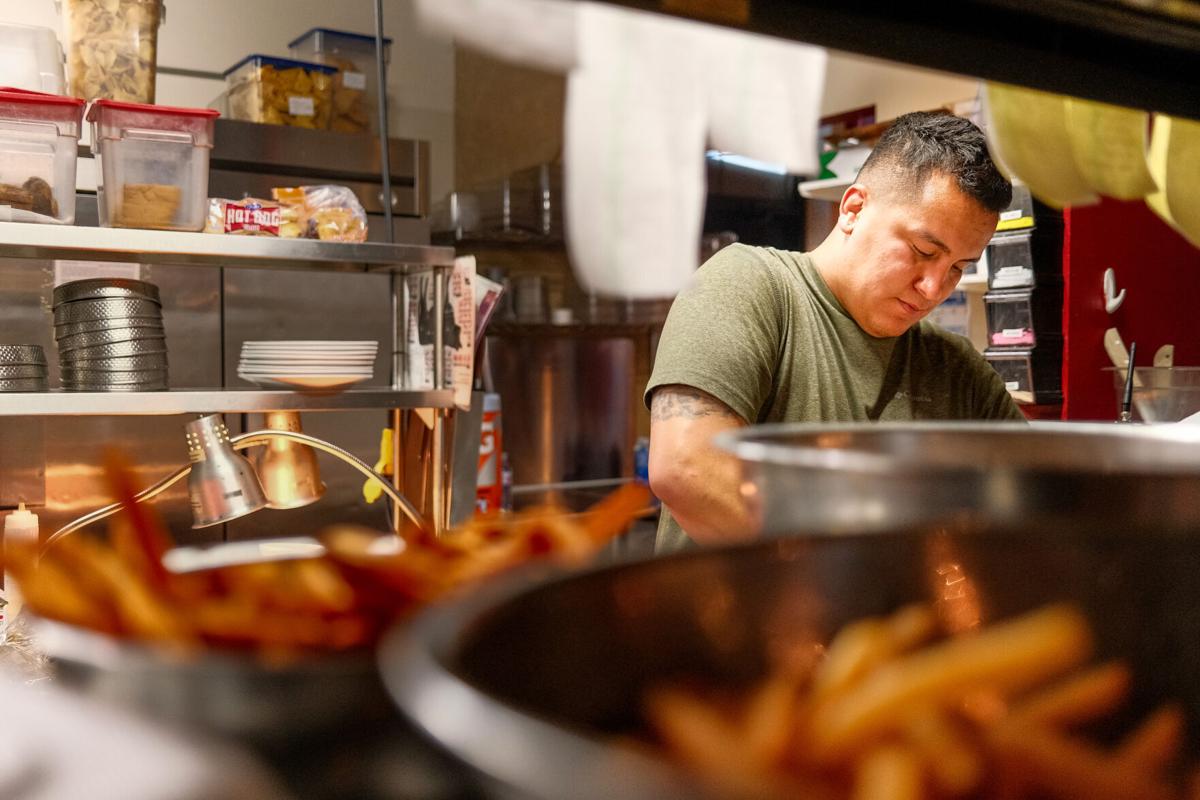 Lupe Delgado, the sous chef at Nookie’s Restaurant & Brewery in Hermiston, works through orders during the business’ rush hour June 26, 2021. Delgado and head chef Trevor Olsen have worked overtime for months following the sudden departure of the previous head chef at the restaurant, and have struggled to find workers to fill the vacancies at the business.

The Oregon Employment Department reported the number of residents in Eastern Oregon receiving unemployment benefits is lower now than it was before the pandemic started.

That statistic makes no difference to the lines of orders filing through the printer at Nookie’s Restaurant & Brewery in Hermiston, which has struggled to find workers as the nation faces a new complication in the economic recovery from the pandemic.

“I don’t have a single cook that’s not in overtime right now,” said Trevor Olson, the head chef at the restaurant and brewery.

He’s been a cook for nearly seven years, shifting around other restaurants in Hermiston and Tri-Cities before coming back to Nookie’s last winter. At 25, Olson is in charge of the entire kitchen at Nookie’s.

“Halibut in 30 seconds,” Olson said down the line.

The two prep cooks were busy at the stove as flames licked at the pans cooking seafood alfredo. Neither are over the age of 20.

Olson flipped two burgers, flames reached toward the ceiling. The previous head cook quit some time after the county relaxed its restrictions due to dropping COVID-19 cases in May 2021, leaving Olson and sous chef Lupe Delgado to run the restaurant.

Before his shift started that day, Olson clocked 60 hours for the week.

Some workers left the market

Most restaurant owners point to supplemental unemployment benefits as not only a principal cause of the labor shortage but also a cause of lowered morale among employees. However, record-low unemployment rates in states such as Nebraska, Idaho and Utah — which are at or below their pre-pandemic levels — has done little to stave off their own labor shortage problems.

The continued benefits, which are set to last until Sept. 6, prompted Eastern Oregon leaders and officials to send a letter to Gov. Kate Brown on June 7 demanding the end of the federal supplement to the 1,468 unemployed workers collecting benefits in Eastern Oregon.

But ending those benefits, according to economists, would not fix the economy’s woes.

Scott McConnell is an economics professor at Eastern Oregon University, and also runs Side A Brewing in La Grande, which has given him close-up experience with the labor shortage.

“The research says no,” said McConnell regarding whether or not ending expanded unemployment benefits would resolve the labor shortage. “I think it’s easy to point at that as being the sole reason.”

“These people were all making benefits — these people all made that decision to go away from benefits and get back in the (labor) market,” McConnell said. “This last group of people, what do we do for them, and why are they out of the workforce?”

Only 136 of those claims come from unemployed service industry workers — representing 9.26% of those receiving benefits. For Union County, that number of claimants was 19, while Umatilla and Baker counties had 56 and 19, respectively. The majority of continued claims, from all Eastern Oregon counties, came from the construction, agriculture and production industries.

According to Oregon Employment Department data, the leisure and hospitality industry saw a significant chunk of workers leave the field altogether over the course of the pandemic. Many, it seems, were able to find work in their professional careers — ones that matched their college degrees or training.

That economic theory is backed up anecdotally. The Oregon Restaurant & Lodging Association polled a number of restaurants across the state. Out of the dozens of responses that were published, approximately 20% mentioned employees not returning because they had found or were looking for a career change.

“There were a number of individuals that switched industries during the early part of the pandemic when it became clear that it was a crisis that was not going to resolve quickly,” wrote Cari Shafer of Oxford Suites in Pendleton to the restaurant association on March 17, 2021.

“There’s not just one thing going on right now,” said Chris Rich, the state’s regional economist for Eastern Oregon. “There’s a bunch of different pieces that contribute to what we would really term more of a tight labor market than a labor shortage.”

One of those factors has been a problem in Oregon for several years.

“The big one that everyone points to right now is actually child care,” McConnell said. “They’ve had a lot of closures of child care places permanently. It’s not so easy to take an economy, shut it down and then just expect it to wake back up.”

A January 2019 report from Oregon State University found much of Oregon remains a child care desert, meaning there were three children for every available slot at child care centers.

According to a report from the Oregon Employment Department, nearly 40% of the Oregon labor force has children at home, and with the inability to find adequate child care, that has left 17%, or roughly 350,000 workers, in a bind.

McConnell said the pandemic caused a great structural shift in the economy that pulled workers out of the labor force entirely, though data on this remains scarce.

“My hunch is that the majority of the 761 people (in Union County) have structural adjustment issues,” said McConnell, “such as child care availability. Many of them may also be unwilling to lose Medicare benefits. By moving back into the workforce, they will lose access to care. This economic crisis is highlighted by the significant lack of affordable health coverage in the economic system right now.”

McConnell also said the federal unemployment benefits kicker amounts to $2.7 million in Union County alone between July 1 and Sept. 4, when the benefits are expected to end. But ending them early, he said, would be a mistake.

“So you may add more incentive to look for work,” he said. “But in the meantime, you’re actually going to take a lot of money out of the system, which may actually depress the economy.”