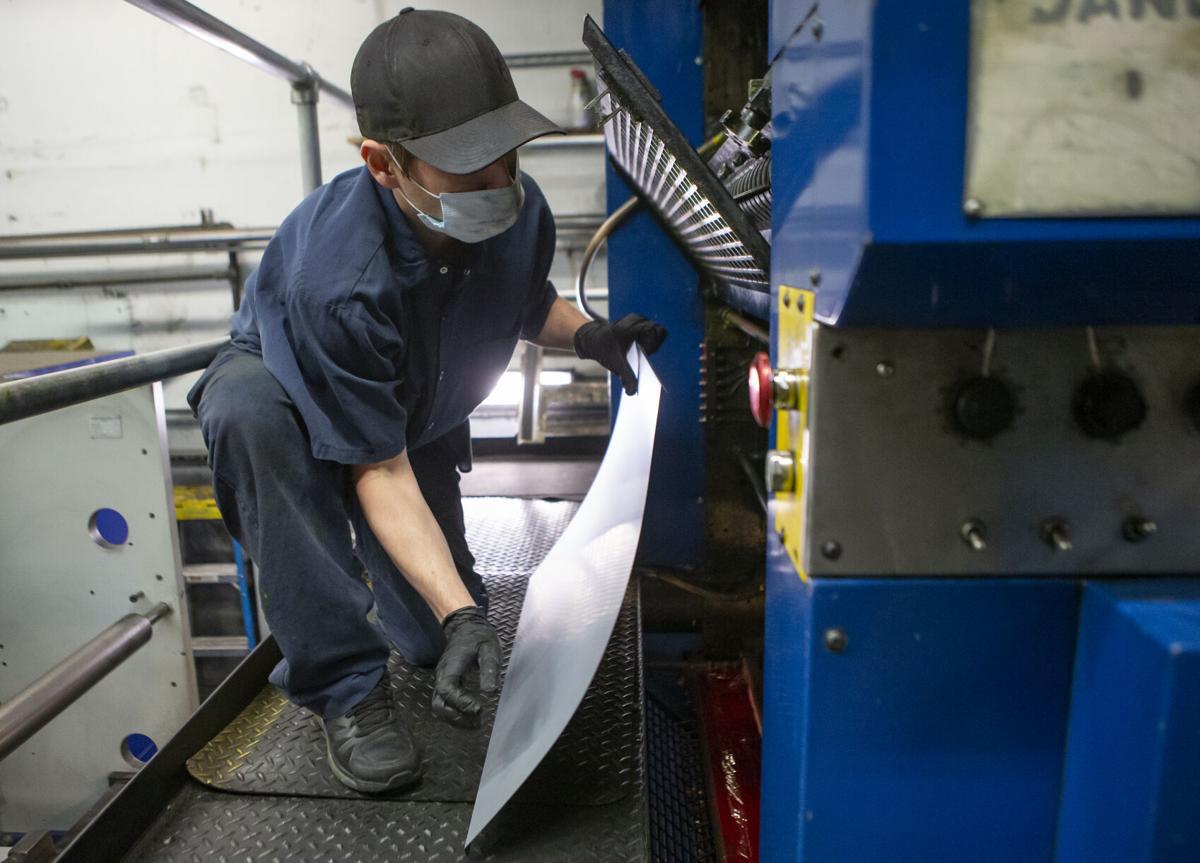 Mike Bordenkircher loads a plate into the press prior to printing the East Oregonian at the newspaper’s printing facility in Pendleton on Friday, Oct. 30, 2020. 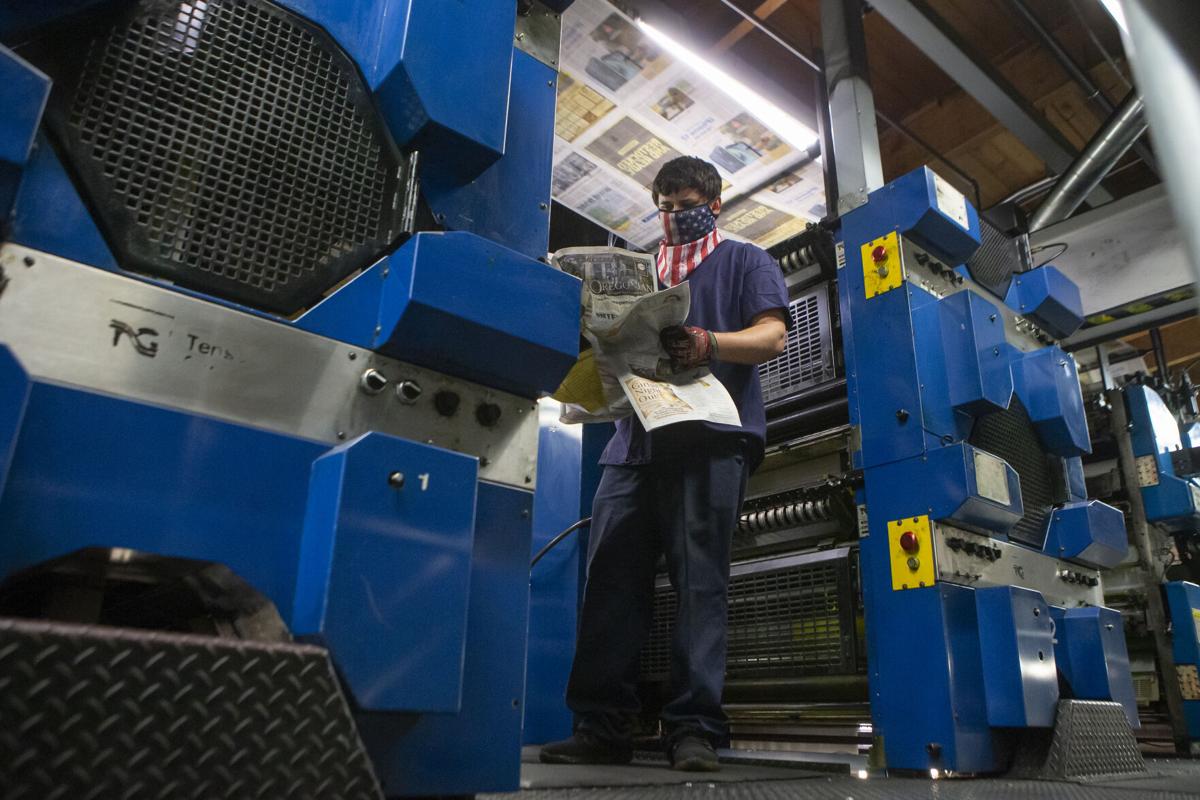 Alvaro Orrala inspects papers and makes adjustments as the East Oregonian runs off the press in Pendleton on Friday, Oct. 30, 2020. 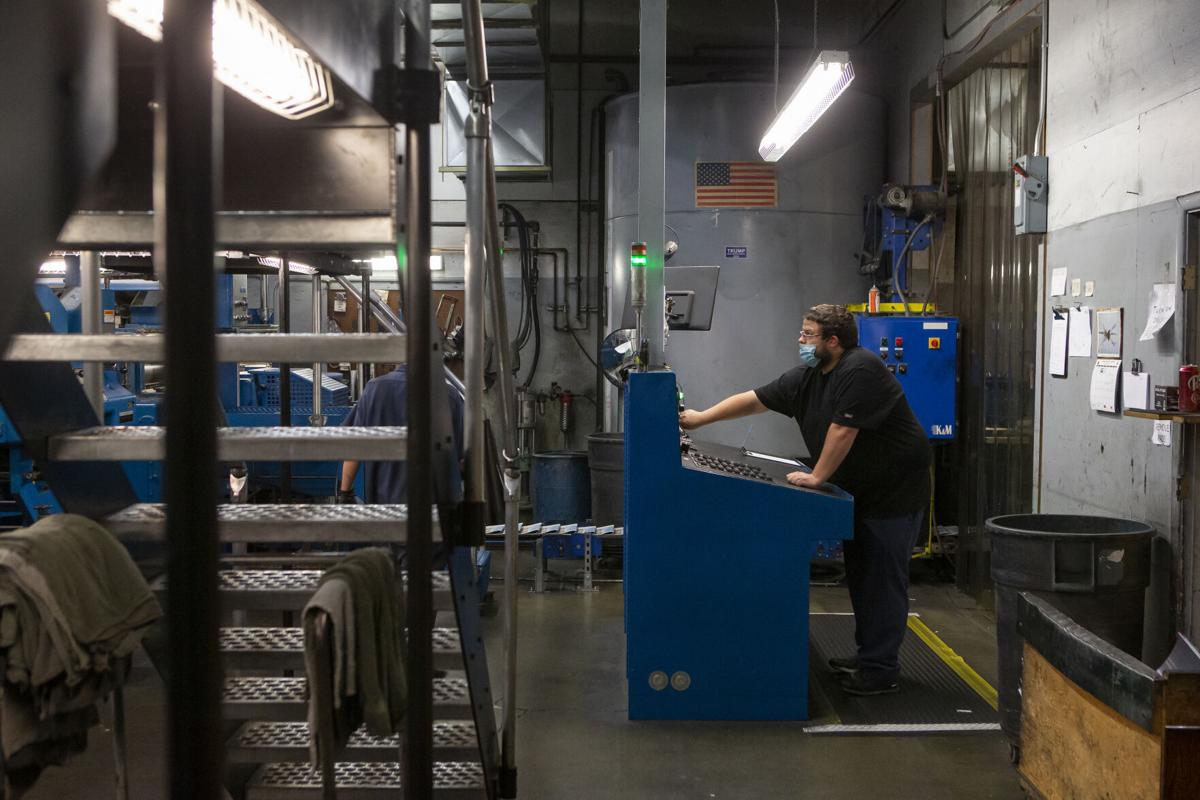 Pressman Nick Tinhof makes adjustments to the press during the press run on Friday, Oct. 30, 2020, at the East Oregonian press facility in Pendleton. 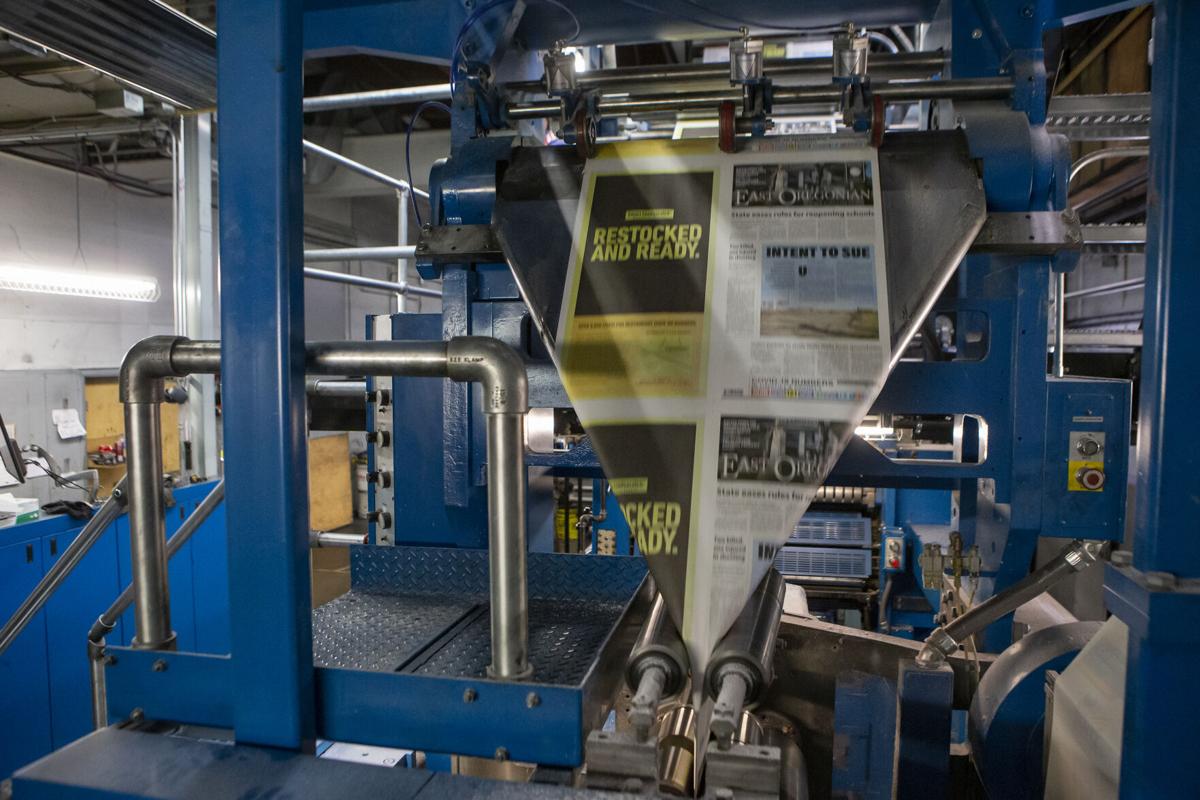 The East Oregonian newspaper runs into the folder on the press at the Pendleton press facility on Friday, Oct. 30, 2020. 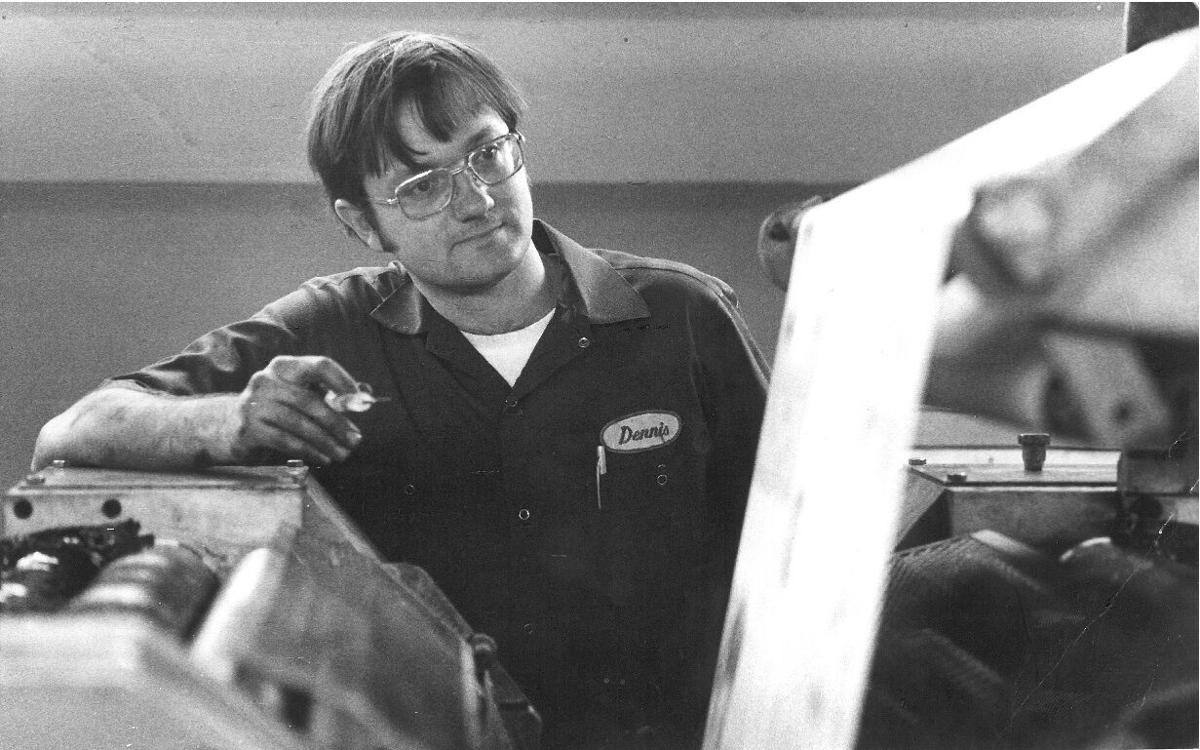 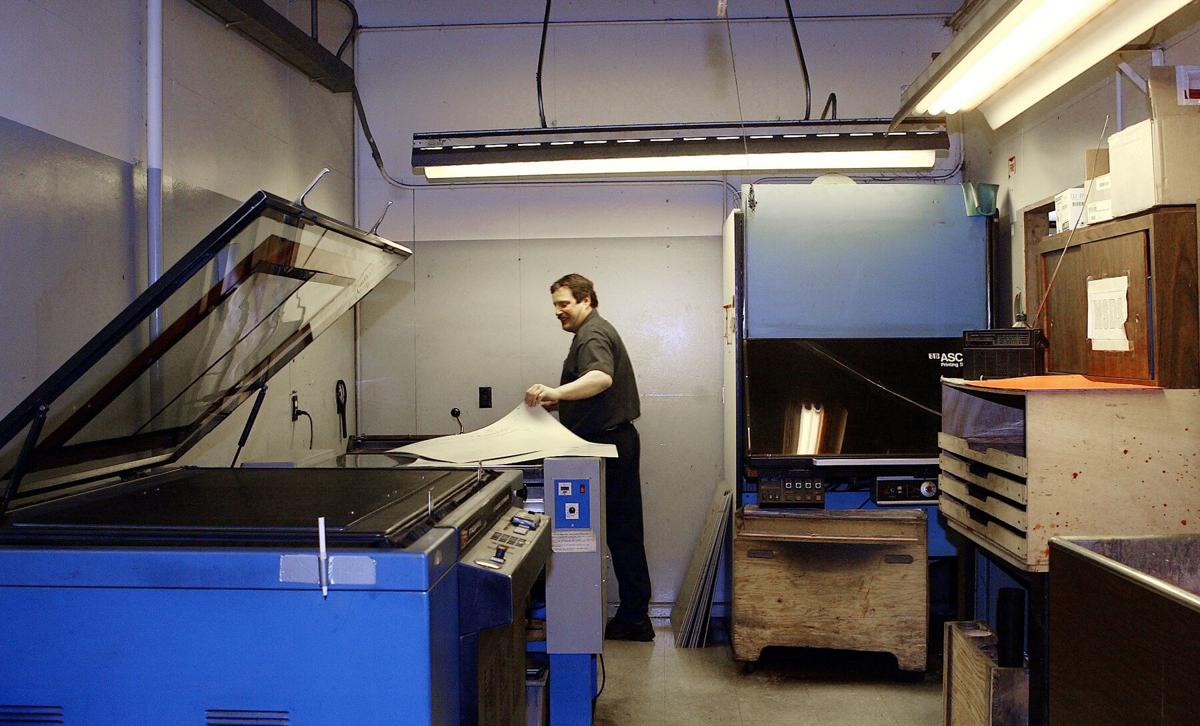 Former East Oregonian pressman Bob Rasmussen burns plates for the newspaper in this file photo from 2005.

Mike Bordenkircher loads a plate into the press prior to printing the East Oregonian at the newspaper’s printing facility in Pendleton on Friday, Oct. 30, 2020.

Alvaro Orrala inspects papers and makes adjustments as the East Oregonian runs off the press in Pendleton on Friday, Oct. 30, 2020.

Pressman Nick Tinhof makes adjustments to the press during the press run on Friday, Oct. 30, 2020, at the East Oregonian press facility in Pendleton.

The East Oregonian newspaper runs into the folder on the press at the Pendleton press facility on Friday, Oct. 30, 2020.

Former East Oregonian pressman Bob Rasmussen burns plates for the newspaper in this file photo from 2005.

When Nick Tinhof winds down his shift on Tuesday, Nov. 3, he knows it will be the end of an era at the East Oregonian.

Election Day marks the last time the EO’s Goss and Tensor press will operate in Pendleton as the East Oregonian begins the process of transitioning its printing services to The Seattle Times Company-owned Walla Walla Union-Bulletin. EO Media Group’s other publications on the east side of the state, including the Hermiston Herald, will also be printed in Walla Walla.

“I’m just sad to see it go, I don’t really know how to put it into words,” said Tinhof, the East Oregonian‘s lead pressman.

Tinhof began working on the press shortly after its installation in 2013 and quickly worked his way up from replacing plates and ink to running the entire show. Tinhof credits former Pendleton pressmen Bob Rasmussen, Jeff Davis and Dennis Duchek with mentoring him and helping him get up to speed on the press and its inner workings

“It’s always fun working at night, you can’t go to the hardware store to get spare parts if something goes wrong,” he said. “Whatever you’ve got in this building is what you’ve got to try to make it go, you’ve got no backup.”

Tinhof is passionate about the work, carefully checking each page for color, clarity or any smudge marks as papers come off the press, ramping the press up and down and making adjustments on the fly like a conductor orchestrating the moves of a symphony.

“You’re responsible for how good it looks,” said Tinhof. “No matter how late it is or what goes wrong there’s no just give up and go home.”

In the coming weeks, the press will be dismantled and shipped to Walla Walla where it will replace the Union-Bulletin‘s aging press. There, it will print papers throughout the region, including those operated by EO Media Group. In the interim, the EO Media Group newspapers and publications will be printed in Yakima at another printing facility operated by The Seattle Times Company.

“The East Oregonian has had a printing press in Pendleton since 1875, so it was a difficult decision to close our production facility and move our press to Walla Walla. But, having two presses within 40 miles of each other no longer makes sense,” said Kathryn Brown, EO Media Group vice president and former publisher of the East Oregonian.

Duchek, a former East Oregonian pressman, first began working on the press in the early 1970s after working as a paper delivery boy for the East Oregonian in his youth. At that time, the East Oregonian was printed on a Goss Suburban press, which the company had purchased more than a decade earlier in 1960. The first web-fed offset press west of the Mississippi River, the Goss Suburban could print 14,000 newspapers per hour from a roll of continuous newsprint.

Duchek’s first job on the press was melting down lead type and pouring lead “pigs” for typesetting machines and working in the camera room, where pages were photographed before being transferred to plates for the printing press.

“When I started we developed pictures by hand and got the inserts all made up from those,” he said. “My first job was pouring the lead pigs for the type.”

In the years to come the press would again be expanded and altered several times to add color printing, with the most significant change being the installation of a Goss Community press in 1977. The Goss Community press ran for 36 years until its replacement in 2013, shortly after Duchek’s retirement.

“The main thing was to put the paper out — and we did that on a daily basis,” he said.

Getting a good deal

In 2013, EO Media Group, which owns the East Oregonian and Hermiston Herald, started the roughly $1.3 million process of replacing the aging Goss Community press with newer Goss and Tensor units. Parts and components for the press were sourced from around the United States, and section by section the new press was pieced together.

With the recession having closed newspapers and printing operations across the country in the late 2000s, the market was full of available printing equipment.

At the time, former East Oregonian publisher Tom Brown referred to the new press as getting a 2-year-old pickup for a rock bottom price.

After the more than monthlong process of replacing the press, the new East Oregonian press roared to life and printed its first paper on Monday, July 15, 2013.

“It was quite a project — overwhelming at times even — but it worked out,” said Rasmussen, a former East Oregonian pressman of more than three decades. “We finally got it running good.”

“When we put that press in, I figured it’d last for a long time,” Rasmussen said. “But I do realize print media is going away.”

Looking to the future

As the EO Media Group looks toward the future, Brown said the consolidation of printing operations makes financial sense for EO Media Group and The Seattle Times Company and allows the East Oregonian and Walla Walla Union-Bulletin to focus on local journalism in the coming years, especially with the financial challenges of the COVID-19 pandemic.

“When we installed our new press in 2013, we knew we were in a period of transition, and that print newspapers would gradually fade away as more of our readers came to prefer to read their local news online,” said Brown. “We didn’t know then that the COVID-19 pandemic would bring significant financial challenges, not only to our company, but to the nation’s economy.”

“Although we won’t be printing in Pendleton, we do plan to continue publishing in print for at least a few more years,” she said.

Heidi Wright, the COO of EO Media Group and publisher of the Bend Bulletin, said the changes in Pendleton come at a time when the industry is looking for ways to adapt to the ever-changing media landscape and it didn’t make sense to have two presses within 40 miles of each other.

“We are excited to begin a new partnership with The Seattle Times Company and hope this can allow for further collaboration down the road,” she said.

Wright said the East Oregonian had lost two pressmen in the past several months and difficulties recruiting qualified applicants to the area added to the decision to move the printing facility.

Wright doubled down on the importance of local journalism and said the company was working to make moves to allow the East Oregonian and other local newspapers to maintain their newsrooms and continue to report local stories.

“I want to extend my sincere thank you to the hardworking people on the press crew and in the mail room,” said Wright. “This is by no means a reflection on any of them.”

Earlier this year, the East Oregonian decreased the number of print editions from five to three times a week, and laid off several staff members in an effort to cut costs amid the COVID-19 pandemic. Despite the adjustments, the paper continues to publish new stories daily, and staff remain committed to covering the news of Umatilla County and the surrounding areas.

East Oregonian publisher/editor Andrew Cutler said the staff at the paper will continue to put out award-winning journalism and work diligently to provide information to the public despite the changes in press location.

“Our mission will not change,” he said. “We remain as committed as ever to creating a quality product that provides the community with relevant, credible content.”