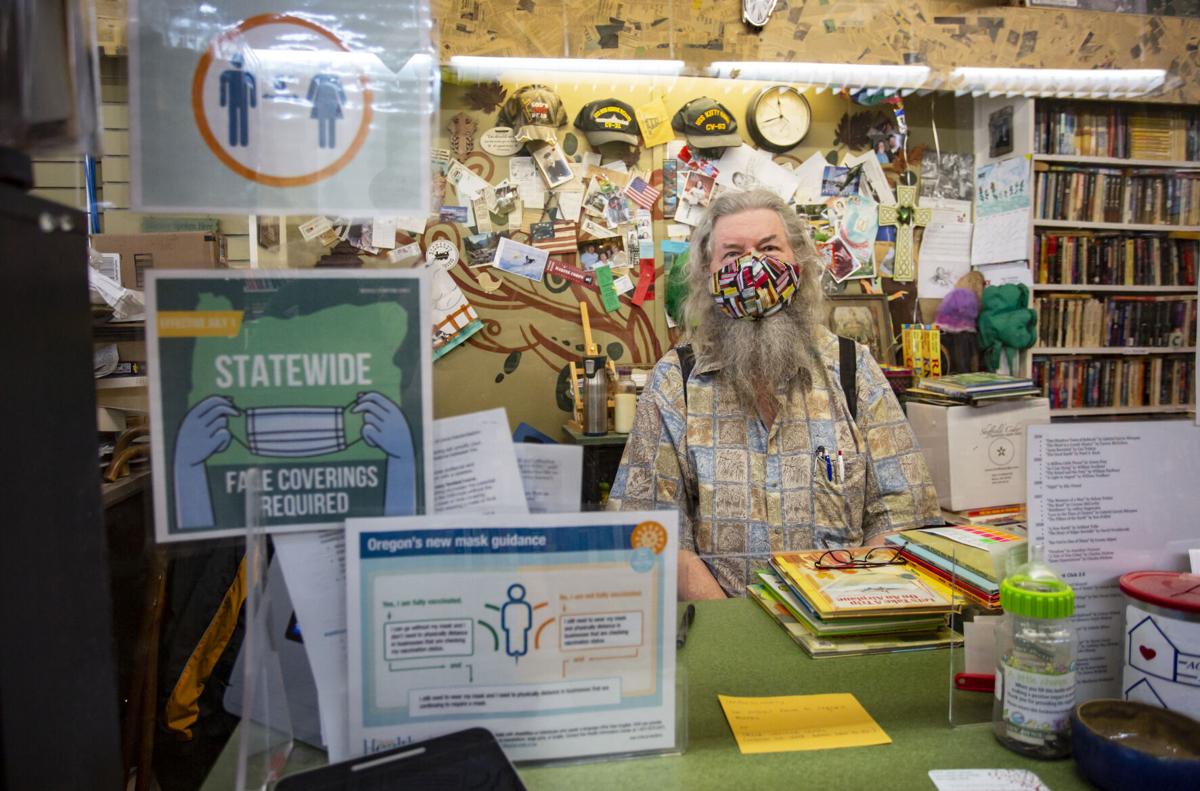 Michael Gormley sits behind a plexiglass shield plastered with various mask and social distancing guidelines at Neighborhood Books & Gifts, the Hermiston bookstore he co-owns with his wife Judy Gormley, on Wednesday, May 19, 2021. 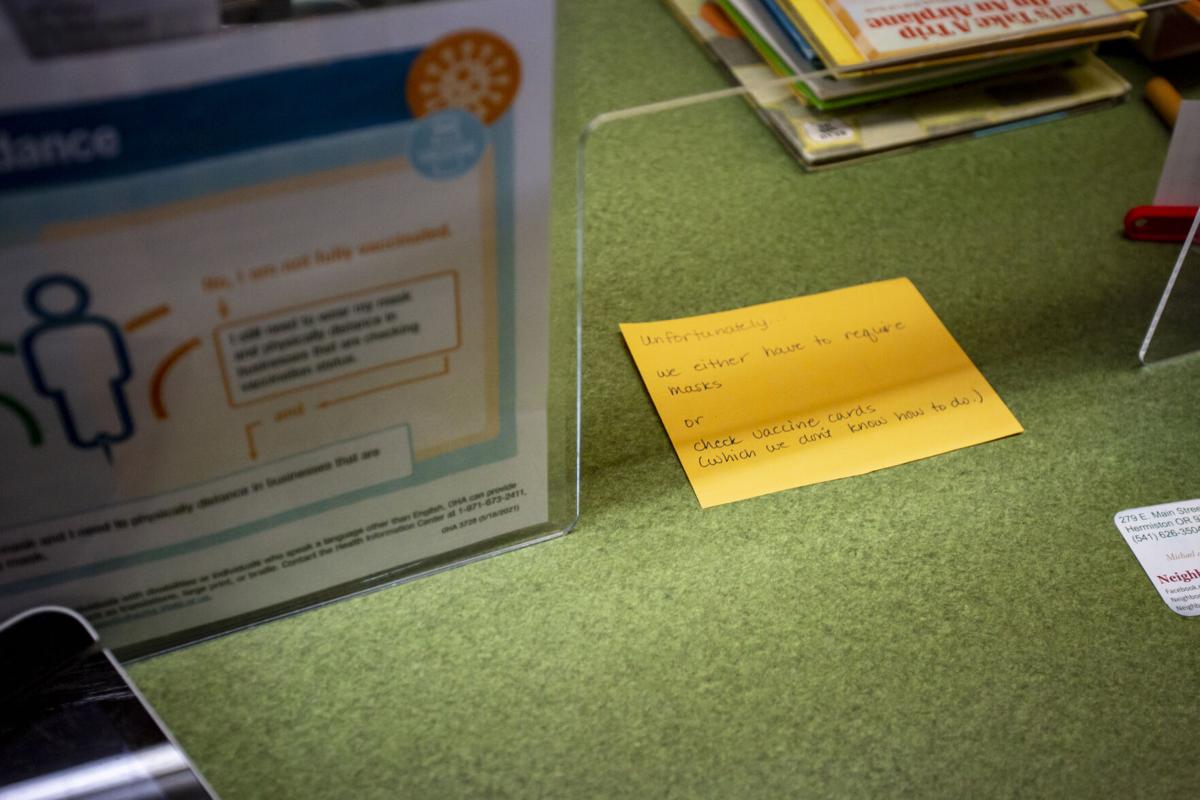 A slip of paper lays out the mask policy on the counter of Neighborhood Books & Gifts in Hermiston on Wednesday, May 19, 2021. The card reads, “Unfortunately, we either have to require masks or check vaccine cards (which we don’t know how to do).” 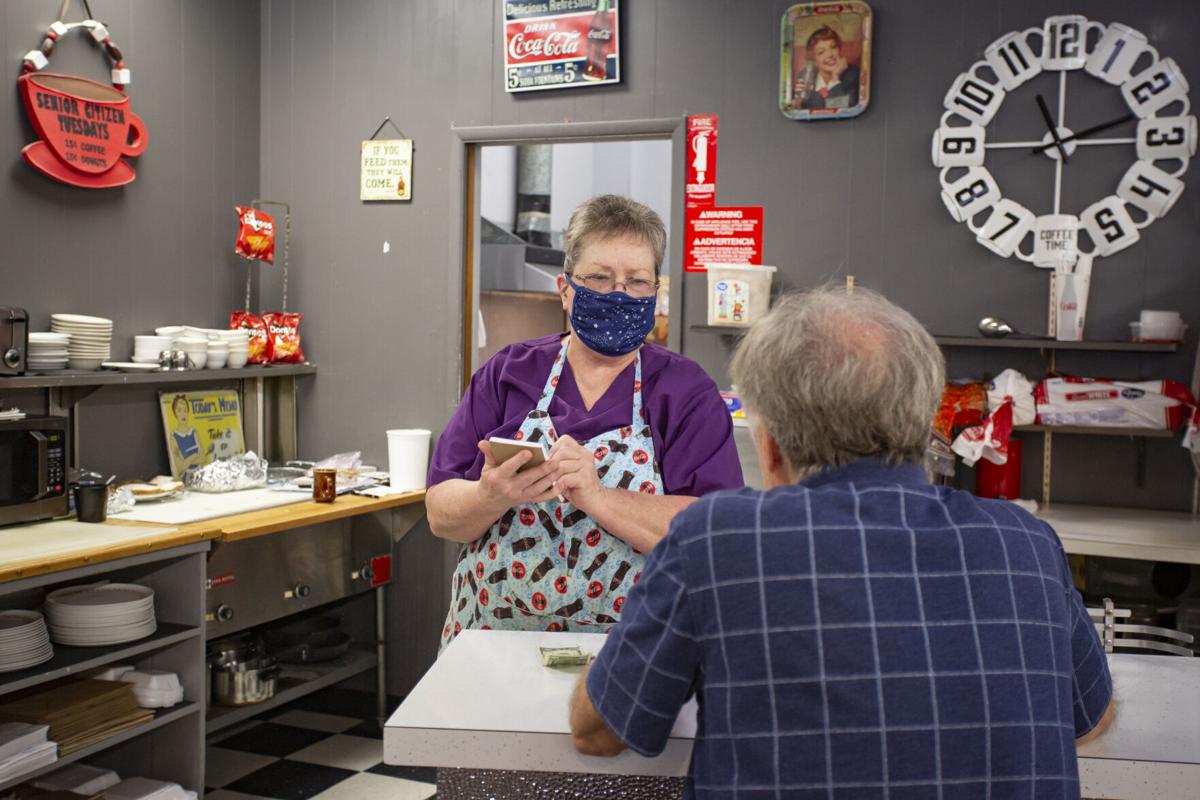 Roberta Picker, left, talks with her brother Larry Picker at the soda fountain counter at Hermiston Drug & Gift on Wednesday, May 19, 2021.

Michael Gormley sits behind a plexiglass shield plastered with various mask and social distancing guidelines at Neighborhood Books & Gifts, the Hermiston bookstore he co-owns with his wife Judy Gormley, on Wednesday, May 19, 2021.

A slip of paper lays out the mask policy on the counter of Neighborhood Books & Gifts in Hermiston on Wednesday, May 19, 2021. The card reads, “Unfortunately, we either have to require masks or check vaccine cards (which we don’t know how to do).”

Roberta Picker, left, talks with her brother Larry Picker at the soda fountain counter at Hermiston Drug & Gift on Wednesday, May 19, 2021.

There’s a small orange note that Michael Gormley, the owner of Neighborhood Books & Gifts in downtown Hermiston, plans to show his customers in the coming days.

It says: “Unfortunately, we either have to require masks or check vaccine cards (which we don’t know how to do).”

He’s not the only one.

Several Umatilla County business owners and employees have voiced frustration about the recent mask-wearing guidance put forth by the state this past week.

The new requirements, announced on Tuesday, May 18, say businesses allowing customers to be maskless indoors must verify if the customer is vaccinated against COVID-19. Businesses that don’t check must require masks, the state says.

Employers say the change puts businesses in a difficult position bound for conflict and confusion.

“I’m not going to ask, they’re just going to have to wear a mask,” Gormley said of checking vaccine status. He added that he’s lost customers by asking them to put their masks on or leave. “Unless they walk in here and show me their card, I’m not asking.”

The new rule comes less than a week after state and federal officials announced that people who have been vaccinated against COVID-19 are no longer required to wear masks or physically distance in most public settings.

But that change came with some caveats. The decision, first announced by the U.S. Centers for Disease Control and Prevention and later approved by the state, does not mean masks aren’t required anywhere. For instance, the federal government still advises fully vaccinated people cover their faces while visiting health care facilities, flying or taking public transit, and in other settings, including homeless shelters, prisons or jails.

The Oregon Health Authority says fully vaccinated people can go maskless in “most outdoor settings” and an “uncrowded private or public space.” However, as reported by The Oregonian/OregonLive, the “exceptions to the mask, face covering, or face shield requirement are not applicable to workplaces,” the state says. Private businesses can even make their mask rules stricter than CDC guidelines, according to the state.

“Some businesses may prefer to simply continue operating under the current guidance for now, rather than worrying about verifying vaccination status,” Gov. Kate Brown said on May 13, “and that’s fine.”

But the recent changes have left businesses across Umatilla County scrambling to clarify the guidelines and figure out what they’ll do. Several business owners and managers declined to be interviewed because they were unsure how to comply with the guidelines. At least one was concerned they would be penalized by the state for failing to adhere to the rules properly.

Umatilla County Public Health Director Joe Fiumara said the health department has been receiving calls all week from county businesses asking what they can and cannot do. He hasn’t had a complete answer for them.

“These folks are confused, and I empathize and sympathize with them, because we’re just as confused,” he said.

“The complete lack of clarity and how this will be implemented must be defined before we put this onto our business community,” she said.

Rosenberg said although businesses need to “understand the guidelines” the state has put forth, the state must understand that most people who will now be put in a position to check vaccination status are “frontline staff” who are “normally younger men and women.”

“To put this burden on them with the ever-changing guidelines creates a sense of uncertainty,” she said. “We want employers and patrons to feel safe in their interactions. I think over the past year it’s safe to say our businesses have gone above and beyond to understand safety procedures, provide education to staff and above all provide a safe space for patrons. To now ask that on top of all those measures, we’re not only adding more, but we’re doing it in a way that puts all liability on those frontline workers and small business owners.”

The change comes as reported COVID-19 cases, hospitalizations and deaths have declined nationally in recent weeks. Meanwhile, vaccines are becoming more widely available and are reaching the arms of thousands of people, showing promising signs that the nation is turning a corner in the pandemic.

Fiumara said the move to lift the mask and physical distancing guidelines was “a step in the right direction,” but added he would have gone a step even further — removing the mandate and replacing it with a “strong recommendation” to alleviate confusion.

“It seems to me that this was used as a political win without accounting for how things would be or work,” he said.

‘Another step towards normal’

Fiumara said he’s unsure how the verification process is enforceable. Like many others, he’s concerned that the rule “shifts more of the policing to the businesses.”

In addition, he’s concerned the new rule also could create a “black market” for selling counterfeit vaccine cards, saying “it doesn’t take much to make one of these” vaccine cards.

“I think you could have overall abuse of the system with some of your more honest people paying the price while trying to keep things in line,” Fiumara said.

Concern also is growing among Oregonians who say the move came too quickly, as large portions of the population have yet to receive the vaccine while case rates are still high. Scientists also say it’s unclear whether vaccinated people can spread the virus to others, though studies suggest vaccines may reduce transmission rates.

Umatilla County has reported the lowest vaccination rate and one of the highest COVID-19 case rates in Oregon, according to state health data. When asked whether lifting the mandate entirely would place the county under greater risk of outbreak, Fiumara said, “It could because of the low vaccination rates.”

“It’s not as quick as flipping a switch, unfortunately,” Fiumara said of the change.

For Bob Mullay, the owner of Hermiston Drug, he was glad to see masking guidelines lifted, calling it “another step towards normal.” However, “as the owner of a small business, I would hope that people would be honest enough to tell me the truth without having them show me the card.”

He, too, said the onus for checking vaccination status shouldn’t fall on the business.

“If they get sick, that should not be my responsibility,” he said. “People have to be responsible for their own actions. It shouldn’t be the business’ responsibility to police anyone.”