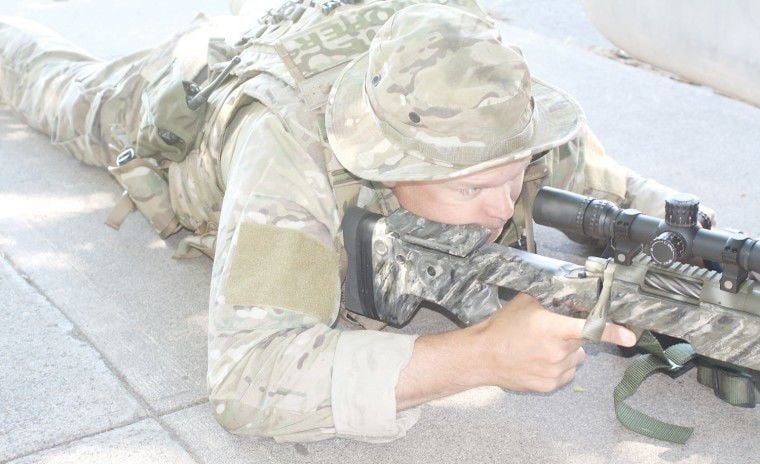 <p>Oregon State Police Sniper David Stone holds his position during a mock hostage scenario and zeros in on suspects inside a room at Armand Larive Middle School during training exercises on Wednesday. Right:</p> 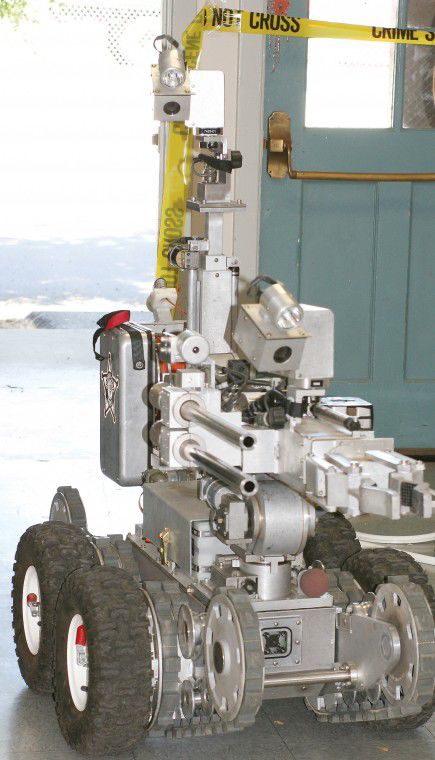 <p>Oregon State Police Sniper David Stone holds his position during a mock hostage scenario and zeros in on suspects inside a room at Armand Larive Middle School during training exercises on Wednesday. Right:</p>

If you happened to drive past Armand Larive Middle School this week, you may have noticed men and women in uniform carrying firearms and driving armored vehicles.

Hermiston's Police and Fire departments and the Oregon State Police were provided the opportunity to carry out exercises and mock crisis scenarios at the now abandoned ALMS.

ALMS is scheduled to be demolished this summer.

Lt. Darryl Johnson from the HPD said, "This is a rare opportunity and we needed to take advantage of it while we can."

Johnson explained that their department was using "simunitions," which are realistic but non-lethal rounds, during their training Monday and Tuesday.

According to Johnson, their simunitions were paint projectile rounds.

Johnson said that although the paint projectiles weren't life threatening, they sometimes left a mark.

Brianna Coulombe, a volunteer for the HPD's training exercises, displayed welts from the simunitions and said, "It's fun."

"We just want them to be aware that any situation can change," Johnson said.

"We're learning about options. We're thinking about survival at all times," he said.

The Oregon State Police suited up next, and brought their armored vehicles and explosives along with them during their exercises Wednesday and Thursday.

One V-150 armored vehicle roared into action during a mock active shooter scenario, in which  the shooter became inactive, turning it into a hostage situation.

At one point, the V-150 broke a window to the room where the hostages were being held to allow SWAT team members to drop a phone inside for negotiations.

Lt. Tim Fox said that having the school for training allowed them to carry out complete operations, which sometimes included breaking things (like windows).

Sniper David Stone said, as he zeroed in on mock suspects in the school through his rifle's scope, that if an active shooter situation ever occurred, they have be prepared.

"If you had a kid in the school, you'd want us to have the training to bring them to safety," he said.

Senior Trooper Jason Davis, a member of the entry team for the active shooter-hostage scenario, grew up in Hermiston and attended ALMS more than 20 years ago.

When asked how he felt about breaking in a window at his old school, Davis said, "Not bad."

The OSP Bomb Squad and Hermiston's Fire Department worked together during their training exercises Thursday.

The bomb squad brought along their robot, Remotec F-6A.

According to OSP Detective and Bomb Technician Dennis Wagner, who has been a bomb technician for seven years and part of the OSP for 25 years, the robot is used during dangerous situations where it's not safe for humans, such as high levels of carbon monoxide, low levels of oxygen, the presence of explosive gases or materials, suspicious devices, and other hazardous tasks.

The robot has three cameras with lights; two 12-gauge cannons,  used for precision shooting and for general disruption; and a claw on the front to move and pick up obstacles. The claw is strong enough to hold up a person.

An air monitor is attached to read the levels of gases that may be in a certain area and determine if it's immediately dangerous to life or health.

The robot is controlled by the bomb squad's operating system, which is set up in an armored vehicle. It's connected by approximately 1,500 feet of cord that is hooked to the operating system in the vehicle. Wagner said they were working on a wireless system.

Wagner used monitors in the armored vehicle to "see what the robot was seeing" and various controls to move the robot into ALMS, where a smoke bomb was placed inside a designated classroom for a test scenario.

Wagner passed with flying colors and nabbed the smoke bomb without setting the trap off.

Family members were also on scene during part of the exercises, including Hermiston Paramedic Mark Johnson's sons, Wyatt and Walker Johnson.

They said they thought the training exercises were "awesome."

For Wyatt, the exercises at ALMS were just the beginning of his involvement with fire department and OSP operations  he said he wanted to follow in his father's footsteps and become a paramedic.