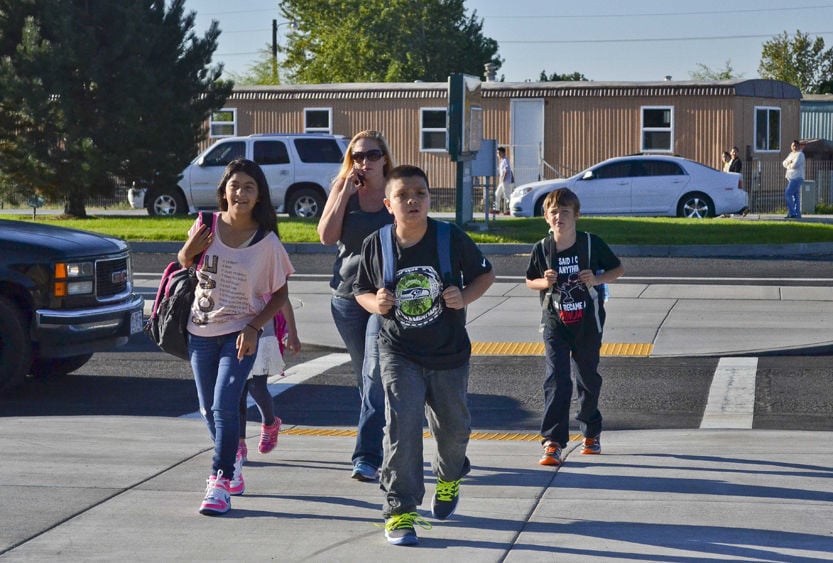 <p>A group of students makes its way across the new crosswalk in the McNary Heights Elementary School parking lot on the first day of school Tuesday.</p> 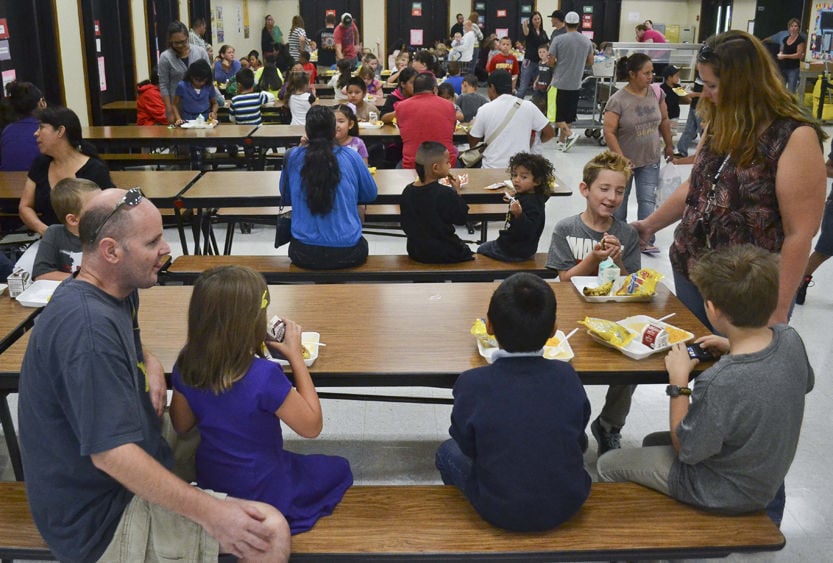 <p>Dozens of students and their families enjoy free breakfast at McNary Heights Elementary School. Tuesday marked the first day of the Umatilla School District's free meal program where all students in the district may now eat for free.</p>

<p>A group of students makes its way across the new crosswalk in the McNary Heights Elementary School parking lot on the first day of school Tuesday.</p>

<p>Dozens of students and their families enjoy free breakfast at McNary Heights Elementary School. Tuesday marked the first day of the Umatilla School District's free meal program where all students in the district may now eat for free.</p>

The first day of school for the Umatilla School District Tuesday marked the first of an assortment of new things happening in the district this year.

To start, all students in the district now have the opportunity to eat breakfast and lunch for free thanks to a new program offered through the U.S. Department of Agriculture. Umatilla Child Nutrition Director Rikkilynn Larsen said the number of students taking breakfast Tuesday was down from previous years but up from the first day last year.

Parents are driving their kids to school and are walking them through the whole process, she said. I still expect to see an increase as the week goes on.

Other than that, Larsen said the whole meal option seems to be going great and parents seem to be happy they no longer have to worry about paying for meals or packing their kids lunches.

Its going really well, she said. A lot of parents have come through. Its been great.

In the morning, students filed into the cafeteria at McNary Heights Elementary School. Many sat with their families to enjoy breakfast together before the start of their first day of classes. Many said they were pleased with the meal options.

Another large improvement to the district this year included a revamp of the parking lot at McNary Heights Elementary School  a project that has been long in the making. The schools parking lot now has a barrier indicating a bus-only lane and a new crosswalk that routes students safely through the center of the parking lot. The project was funded by a $391,000 Safe Routes to School grant, and the school district and City of Umatilla each contributed $28,000 in funds, as well. The improvements were made just in time for the start of the school year, and school staff seem pleased with the improvements.

Vice Principal Rick Cotterell said one of the goals of the improvements was to prevent cars from entering the bus lane, and it worked wonderfully Tuesday.

No cars have tried to drive up the bus lane yet, so it is looking pretty good, he said.

Umatilla High School and Clara Brownell Middle School students also went back to school to a newly resurfaced track this year, in addition to new goal posts and a new sound system at the Milt Durand Football Complex. The goal posts and sound system were funded by a $6,300 grant from the Wildhorse Foundation, and the district also allocated about $93,000 from its budget to resurface the track.

Students also had their share of firsts this year, each starting a new grade with new teachers and new experiences.

After dropping his two boys off at McNary Heights, John Monahan said he and his sons were feeling good about the first day of school. He said this year will mark his boys first full year in Umatilla after moving into the district after school had begun, last year.

They have been looking forward to school, he said.

Varik Rosenburg and his brother Wyatt started in second grade and preschool, respectively, this year. Rosenburg said he has looked forward to going back to school and, more specifically, to learn more about math.

Amanda Rosenburg, the boys mother, said Varik enjoys the after-school program and is looking forward to working with Legos in the robotics program at the elementary level. Varik said he mainly just likes playing with the Legos to see what he can create and aspires to be an artist someday.

I have paints and all that stuff, he said Tuesday. I like to paint, and I like to draw.

Second-grader Rory Viesca said she is most looking forward to working on her writing. She said she hopes to become a writer one day.

And for the Golladay family, the start of the first day of school was full of butterflies and a bit of nerves. Amanda Golladay said her children Brynn, Azayha and Camron started in fourth, second and kindergarten, respectively, Tuesday, and each was both nervous and excited for their first day back.

Azayha was saying whats this feeling in my stomach?  she said. Theyre all nervous.