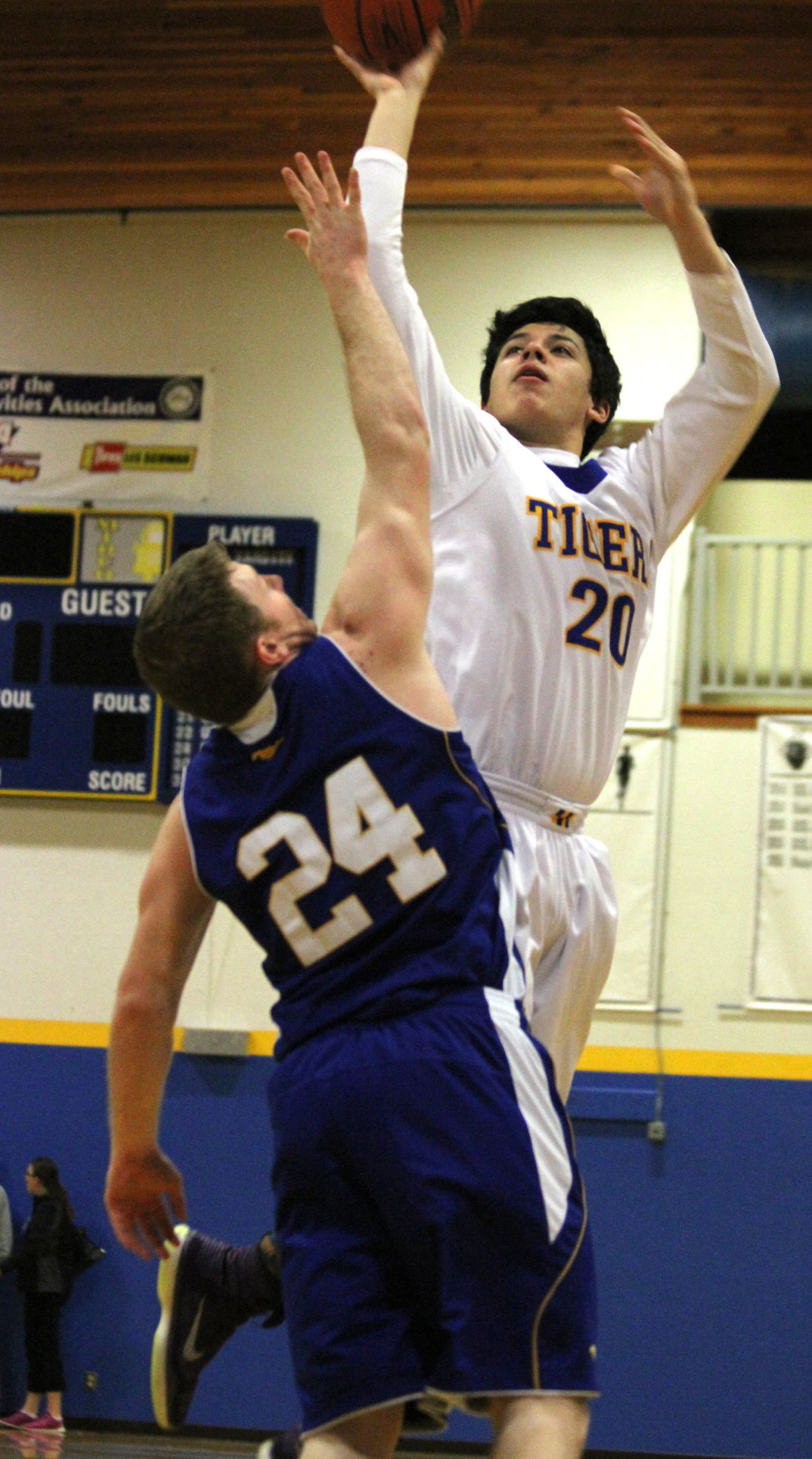 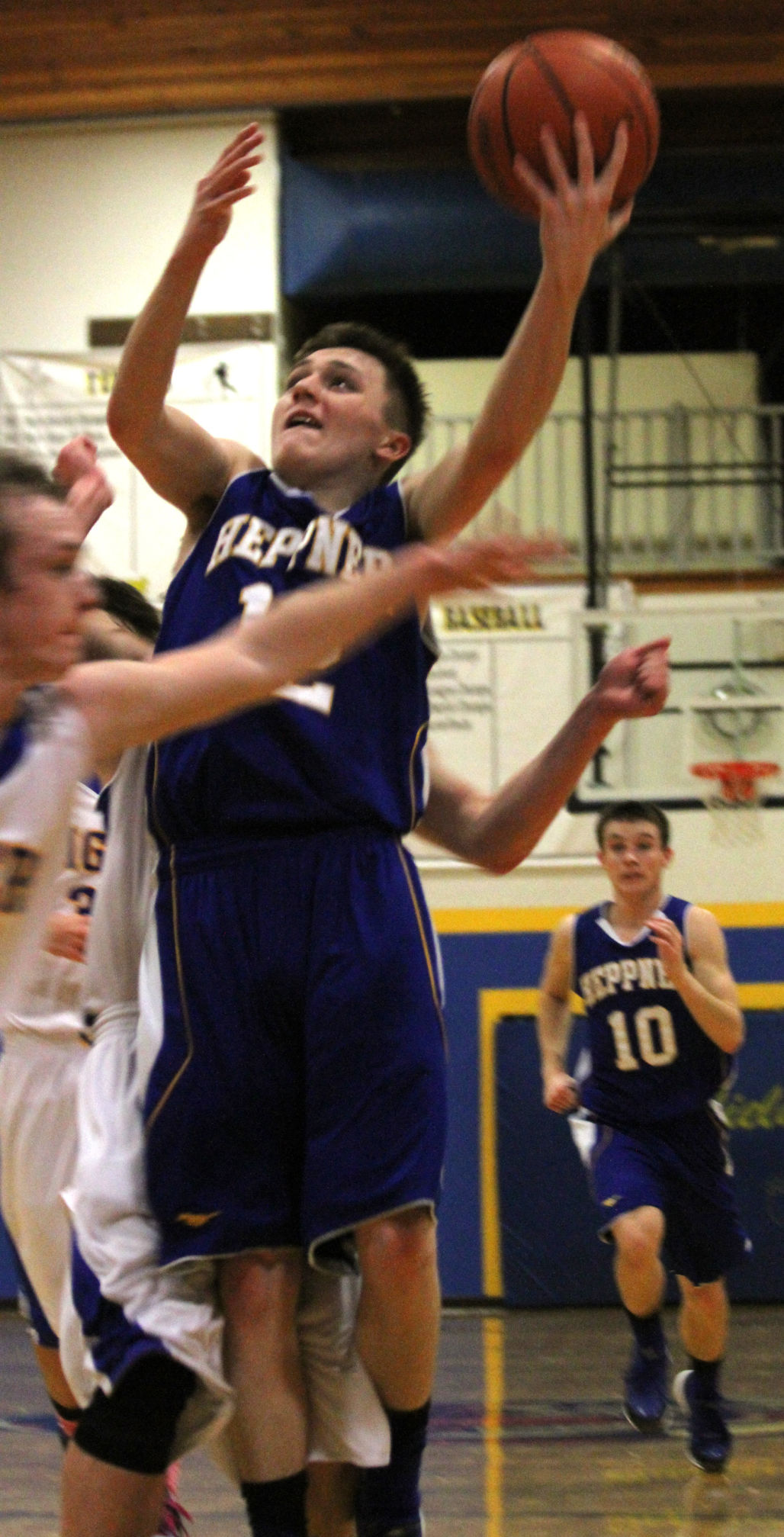 Staff photo by Sam Barbee Heppner's Caden Hedman (12) attempts a layup as a host of Stanfield Tigers defend during the Mustangs 44-43 win Saturday in Stanfield. 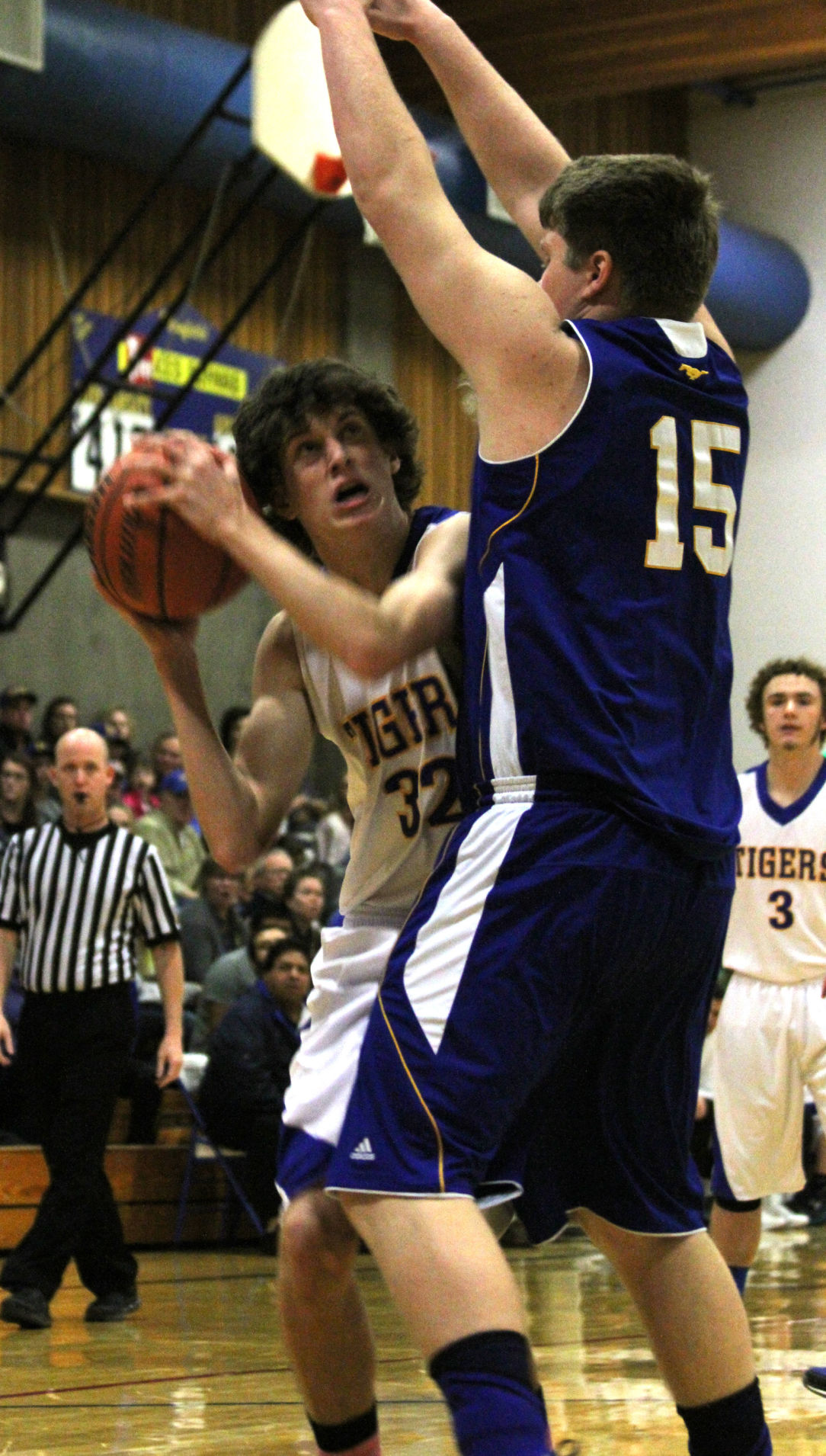 Staff photo by Sam Barbee Stanfield's Brody Woods (32) is defended by Heppner's Patrick Collins during the first half of Heppner's 44-43 win Saturday in Stanfield. 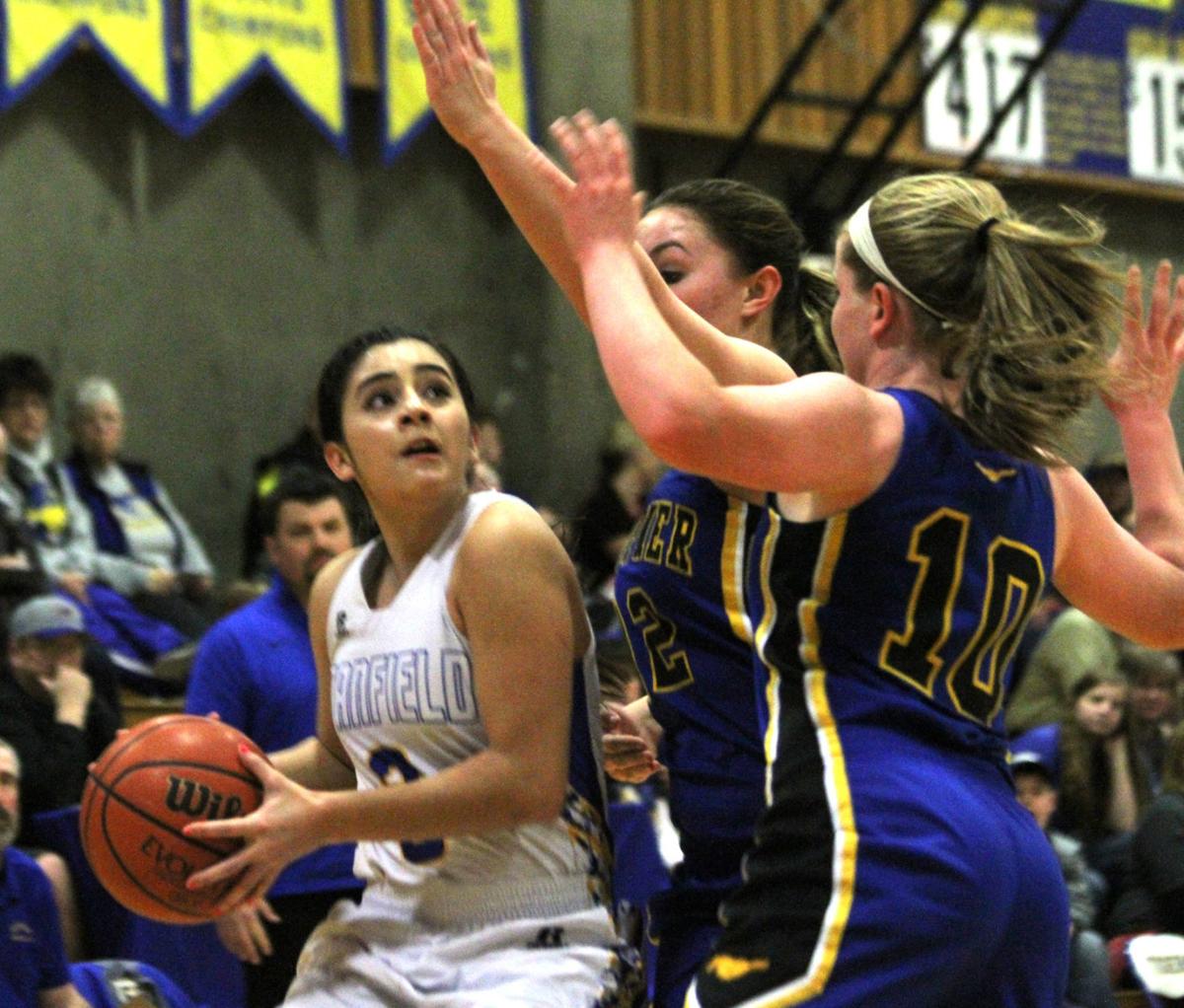 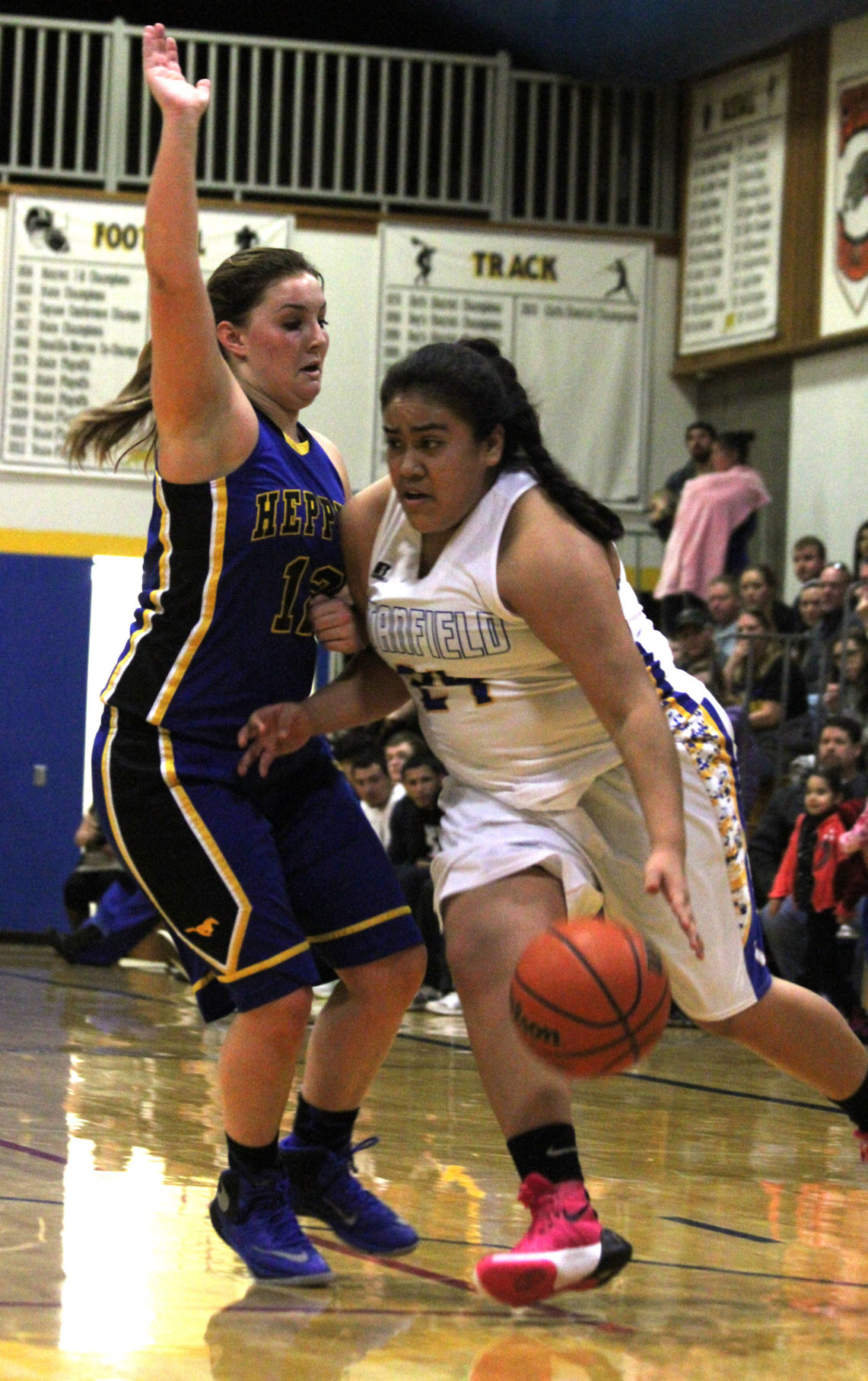 Staff photo by Sam Barbee Heppner's Caden Hedman (12) attempts a layup as a host of Stanfield Tigers defend during the Mustangs 44-43 win Saturday in Stanfield.

Staff photo by Sam Barbee Stanfield's Brody Woods (32) is defended by Heppner's Patrick Collins during the first half of Heppner's 44-43 win Saturday in Stanfield.

STANFIELD — The play worked exactly as it was supposed to.

With one second remaining and the Stanfield Tigers boys down 44-43, the Mustang defense collapsed down on Stanfield junior Dylan Grogan on the baseline inbounds, leaving Brody Woods open from eight feet out. The lob was accurate, Woods caught it and tossed it at the rim in one motion, but it went off back iron, giving Heppner an exciting one-point win Saturday evening.

“I knew by setting up that play that the ball was probably gonna end up in Brody’s hands. I knew they’d be tight on Dylan. That’s exactly how it happened, but the ball didn’t bounce the right way.”

“We knew coming in it was gonna be a dogfight,” Heppner coach Jeremy Rosenbalm said. “That’s two really good basketball teams that gave everything they had. I can’t ask anything more from my team in terms of effort or hustle. We’ve worked so hard to get to this point, and to have big road wins like this (is huge).”

It was a back-and-forth affair all night that was rather mistake-free. There were only a total of 15 turnovers committed by both teams combined, and, for the most part, there weren’t any silly fouls, either.

Entering the second quarter up 13-8, Heppner watched as the Tigers’ defense ratcheted up, forcing three straight turnovers while embarking on an 11-2 run to take the 19-15 lead on Flores’ 3. The possession prior, Thyler Monkus converted a three-point play to take a one-point lead at 16-15, then Flores hit his 3 for the four-point lead.

Then Weston Putman took over.

The 6-foot-2 senior scored 10 of Heppner’s last 13 points as Heppner closed the first half on a 13-2 run to take a seven-point lead into the break.

“A couple of (guys) didn’t play their best game (Friday) night (in a 49-42 loss vs. Irrigon), and so they were amped up and ready to redeem themselves tonight,” Rosenbalm said. “Weston was one of those guys. He was pretty upset last ngiht with the way he played and we wanted to come and show our fans what he can play like.”

The Mustangs largely controlled the action in the second half, grabbing the 10-point lead shortly into the third quarter. Stanfield, though, whittled it away. Grogan’s 3 with 4:59 in the frame cut the lead to seven, and a minute later Flores’ 3 cut the lead to five at 33-28 with 3:56 on the clock. Up five in the quarter’s last possession, Patrick Collins scored a putback as the buzzer sounded to give Heppner a seven-point lead heading into the final period. It was the second time Heppner scored as a quarter ended. Putman tossed in a layup as the first quarter buzzer rang.

Stanfield scored the first seven points of the fourth quarter to pull even at 37 on Grogan’s free throw, and Flores had a chance to take the lead in a one-and-one situation, but failed to convert. On the ensuing possession, Putman converted a three-point play with 6:12 left to put Heppner up three at 40-37. Stanfield wouldn’t tie again.

The Tigers got within three at 43-40 on a Grogan free throw, and got within two at 44-42 on Ryan Bailey’s basket with 1:18 left. Grogan, again, made one of two from the line to cut the Mustang lead to 44-43, and had a chance to win it with six seconds left. His shot was off, a jump ball was called, giving Stanfield one last shot, but Woods’ couldn’t win it.

“We’re not done. We still have good guys coming up,” Baros said. “It’s not all sealed in stone that we’re there. We still gotta work to get there.”

Stanfield is at Culver this Friday for a 4:30 p.m. tip. Heppner’s next outing is a 6 p.m. meeting with Weston-McEwen in Heppner the same day.

STANFIELD 38, HEPPNER 24 — After a slow start by both teams in Stanfield and perhaps a bit of a hangover from Stanfield after a big win Friday night at Pilot Rock, the Tigers used big second and third quarters to handle the Mustangs Friday night.

No player scored in double figures. Cynthia Curiel led everybody with nine points for Stanfield (9-9, 4-3), and Jacee Currin led Heppner (2-16, 0-7) with eight points and seven rebounds.

With starting guard Bailey Watson back in the lineup after missing several weeks due to an injury, Stanfield coach Daniel Sharp feels there’s finally some continuity back with his offense.

“When played on Tuesday, it was the first time we’ve had all 12 girls we started with a month and a half ago,” he said. “We’ve had various injuries and (players) gone (sometimes), and we’re back now. We had another girl go down with a sprained ankle the other night, but the continuity in practice and offensively we had good looks int he first quarter and just missed layups.”

In a scary moment, Heppner sophomore Morgan Correa left the game early on after hitting her head on the floor. She would not return to the game and left during halftime holding her head after likely suffering a concussion.

But it was the Tigers’ defensive pressure that proved the difference. Heppner committed 27 turnovers Friday night, while Stanfield coughed it up just 15 times. Thirteen of Heppner’s turnovers were Stanfield steals.

The Mustangs took a 6-2 lead into the second quarter, and Stanfield roared past, outscoring the visitors 14-3 in the frame. The third quarter was much of the same, wiht Stanfield starting the stanza on a 10-0 run and finishing the quarter at 14-4.

Heppner tried to come back in the second half, but Stanfield kept them at arm’s distance.

Auditors: ODOT can learn from missteps in wildfire logging

Auditors: ODOT can learn from missteps in wildfire logging