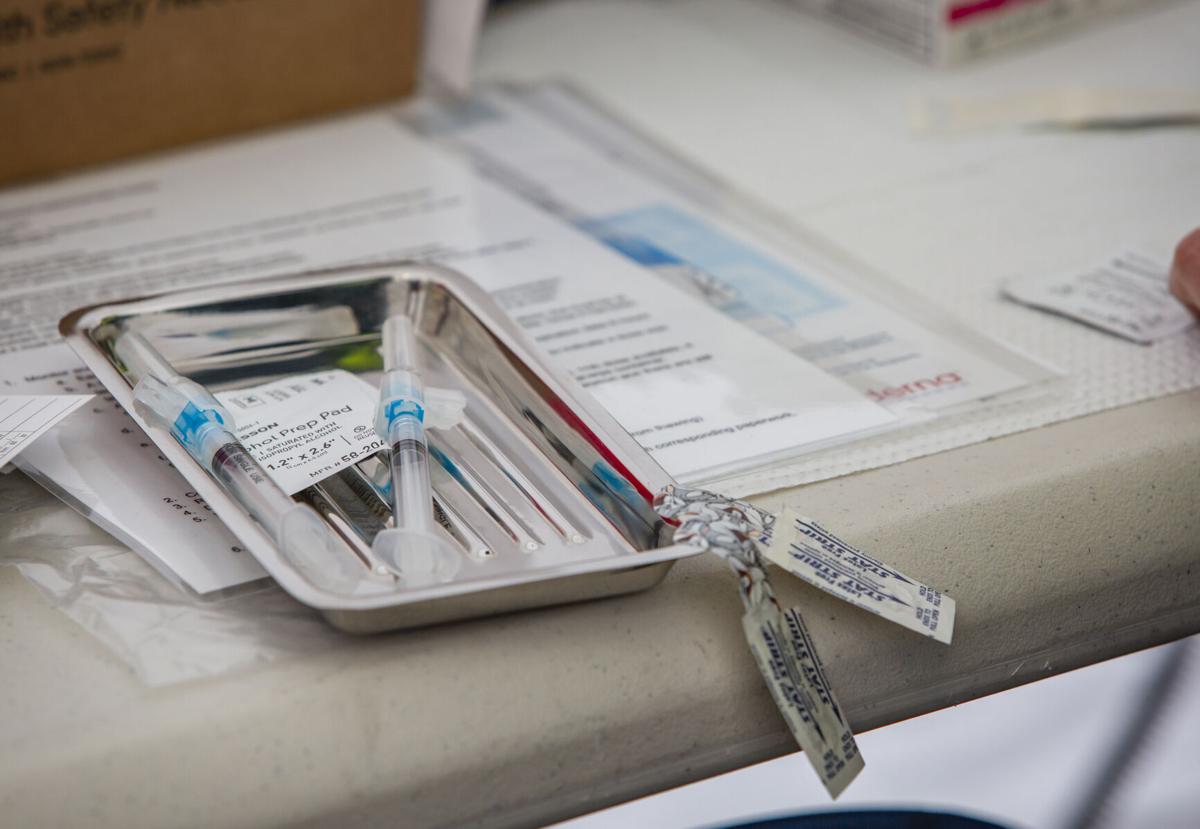 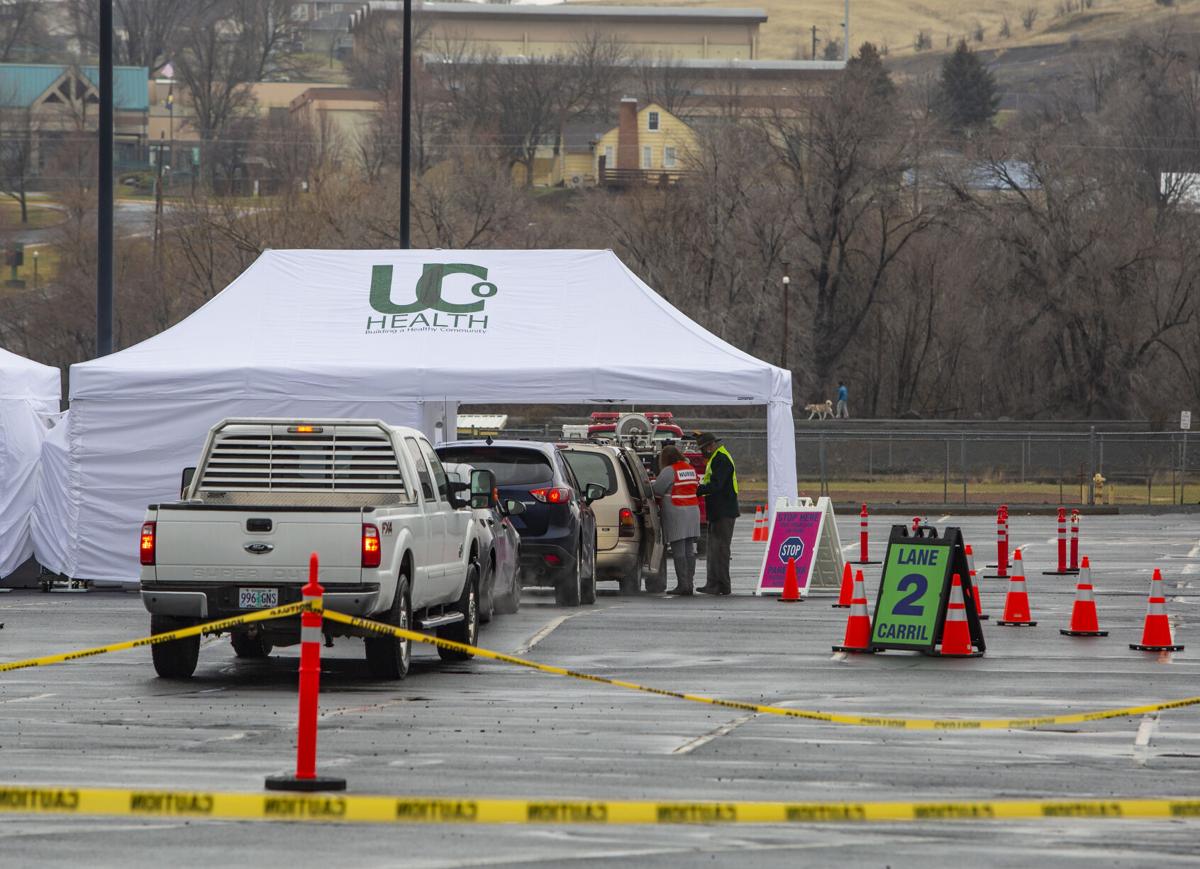 Cars pass through a drive-thru COVID-19 vaccination clinic at the Pendleton Convention Center on Friday, Jan. 22, 2021. 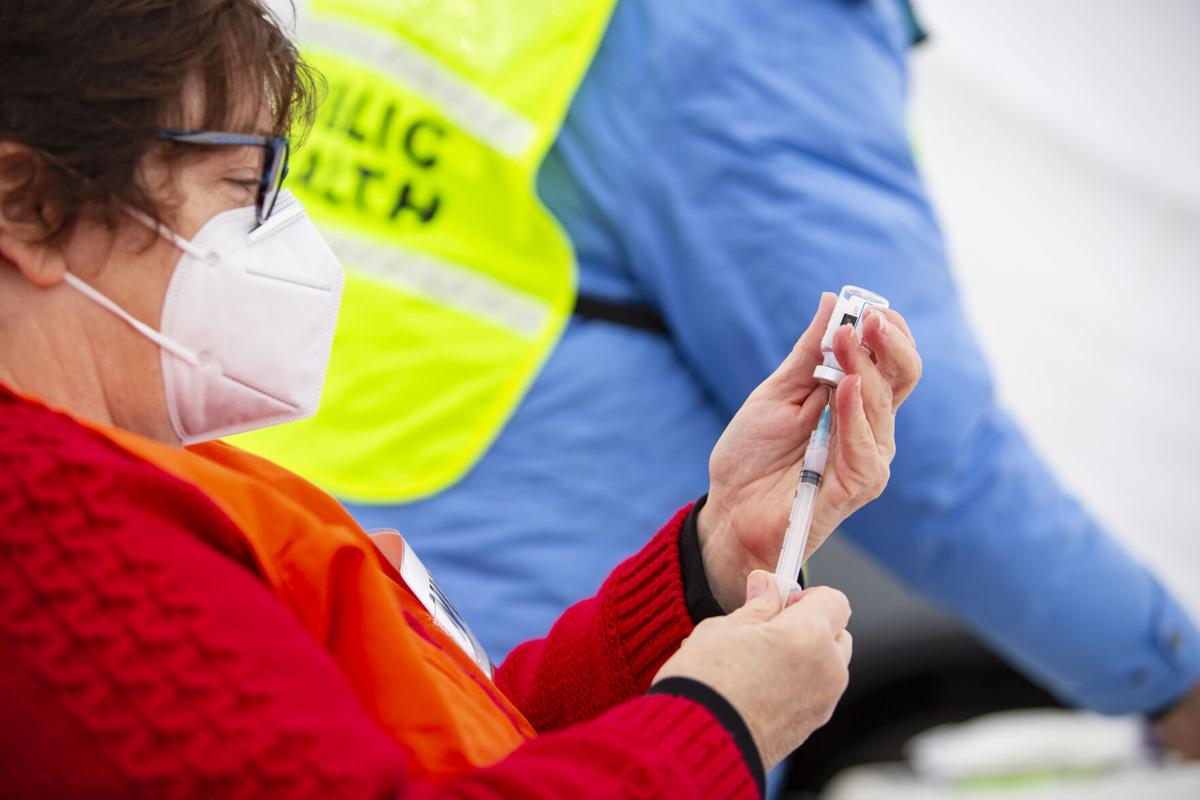 Cars pass through a drive-thru COVID-19 vaccination clinic at the Pendleton Convention Center on Friday, Jan. 22, 2021.

Umatilla County health officials say the health department is scheduled to receive 700 doses of COVID-19 vaccine in time for clinics planned to vaccinate the first round of educators in the county.

The outdoor events are planned to take place at the Pendleton Convention Center on Thursday, Jan. 28, and the parking lot of Hermiston High School on Friday, Jan. 29, from 8 a.m. to 6 p.m. Residents from Phase 1a who have yet to receive the vaccine are also eligible to be immunized at the events, according to Joe Fiumara, the county’s public health director.

“We are in communication with all school districts (including private schools) asking them to prioritize 25% of their staff to send to the events,” Fiumara said. “We ask that they prioritize based on special education and elementary educators, and those that work directly with children.”

Health department officials estimate there are perhaps 2,000 total educators in Umatilla County. Therefore, officials are looking to focus efforts on groups like elementary school teachers in an effort to get younger students, who often struggle with online learning, back in classrooms sooner.

As of Jan. 22 it was unclear exactly when the county would receive the next shipment, but county officials were moving forward with confidence that doses will be received prior to the Jan. 28 event, Fiumara said.

And on Friday, Jan. 22, the health department held a county-wide event at the Pendleton Convention Center where it planned to bring 500 doses to a group specified by the Oregon Health Authority, including long-term care providers and patients, people with intellectual and developmental disabilities and their caregivers, home health providers and health care workers who provide home-based health care.

The latest shipment to Umatilla County came just days after the health department learned that it wouldn’t be receiving any vaccine from Monday, Jan. 18, through Jan. 22. Days later, however, the county health department reached an agreement with state officials to receive the 1,000 doses from a batch originally reserved to be second doses but had yet to reach the arms of Oregonians.

The health department’s agreement with the state, according to Fiumara, stated the county would help immunize eight long-term care facilities that were not covered in the Federal Pharmacy Partnership, a national effort to send retail pharmacists into nursing homes to speed up COVID-19 immunization efforts after a slow initial rollout.

Fiumara said he’s confident that if the county receives ample doses, those long-term care homes will have each received their promised vaccines by the end of January.

Health care professionals have immunized more than 2,500 people in Umatilla County against COVID-19 as of Jan. 21 — approximately 3.1% of the county’s population, according data from the health department.

Oregonians who are 80 and older must wait until Feb. 8 to receive their vaccine, Gov. Kate Brown announced on Jan. 15. State health officials said during a Jan. 22 press conference that Oregonians older than 65 won’t be eligible for COVID-19 vaccinations until the week of March 7, a week later than previously promised.

Those with underlying conditions would be next in line after senior citizens, and those classified as essential workers — a list the state has not finalized yet — aren’t expected to be eligible to begin receiving the vaccine until May.

Brown came under pressure this week for her decision to prioritize vaccinating educators over elderly Oregonians. Some applauded the state’s decision, saying it is most important that students return to the classroom. Others deplored the move, saying it places the population most susceptible to COVID-19 at greater risk of severe or deadly infection.

Over half of Oregon’s 1,865 COVID-19 related deaths have been reported from residents over the age of 80, according to state health data.

“If we waited to vaccinate educators after seniors, we wouldn’t have enough doses of vaccine to finish vaccinating (educators) until May,” Rachael Bank, the public health director for the Oregon Health Authority, said in the press conference.

Bank added she was confident the state will be able to immunize “most educators” before Feb. 8, despite the sluggish statewide and national vaccine rollout.

Oregon is one of two states in the country to allow educators to be immunized before older residents, as reported by The Oregonian, while 45 other states have already begun or will soon be inoculating some of their oldest and most vulnerable residents. The move defies guidelines from the Centers for Disease Control and Prevention, which recommends vaccinating the elderly, people with underlying health conditions, and people at high risk of exposure first.

Reported COVID-19 deaths continue to surge to record-breaking heights in Oregon, according to OHA, with 195 reported deaths between Jan. 11 through Jan. 17. The total exceeded the previous record set a week before.

Weekly COVID-19 cases, however, recently declined, as health officials reported 7,860 new daily cases between Jan. 11 and Jan. 17, a 4% decline from the previous week. The percentage of positive tests also dropped recently to 5.9% for the week of Jan. 10 through Jan. 16, according to OHA.

In all, 186,896 Oregonians have been inoculated against the virus, with 31,517 of those having received their second dose, making them fully immunized against COVID-19, according to OHA.