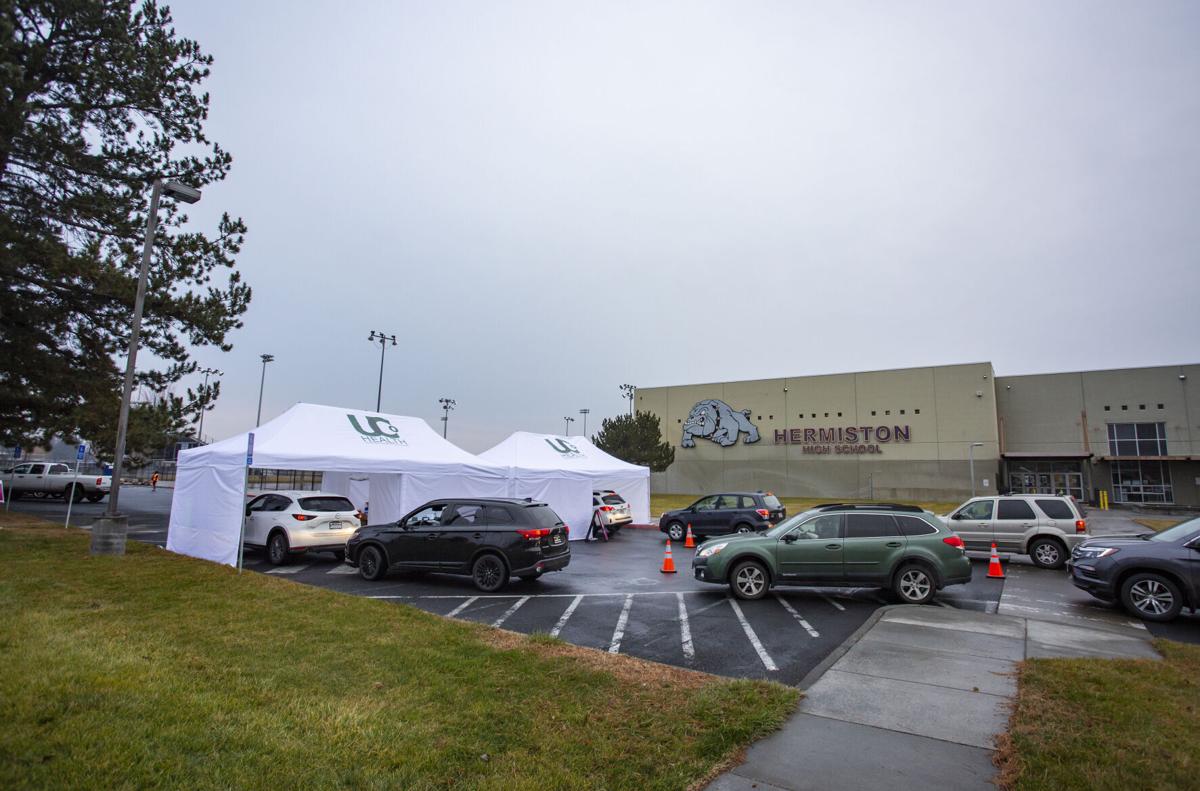 Cars drive through a COVID-19 vaccination clinic at Hermiston High School on Friday, Jan. 29, 2021. The clinic was aimed at teachers on the west side of the county following a similar event in Pendleton the day before. 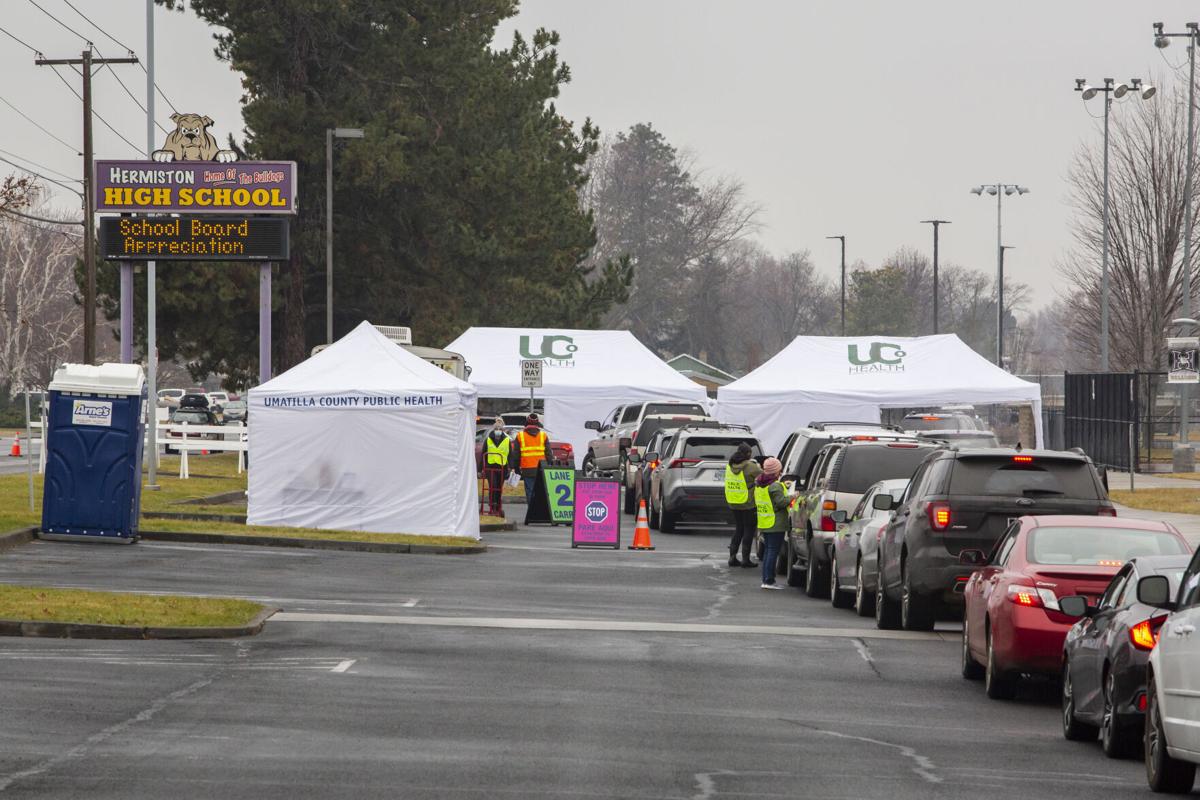 Vehicles line the parking lot at Hermiston High School as teachers wait to receive their first dose of the COVID-19 vaccine on Friday, Jan. 29, 2021. 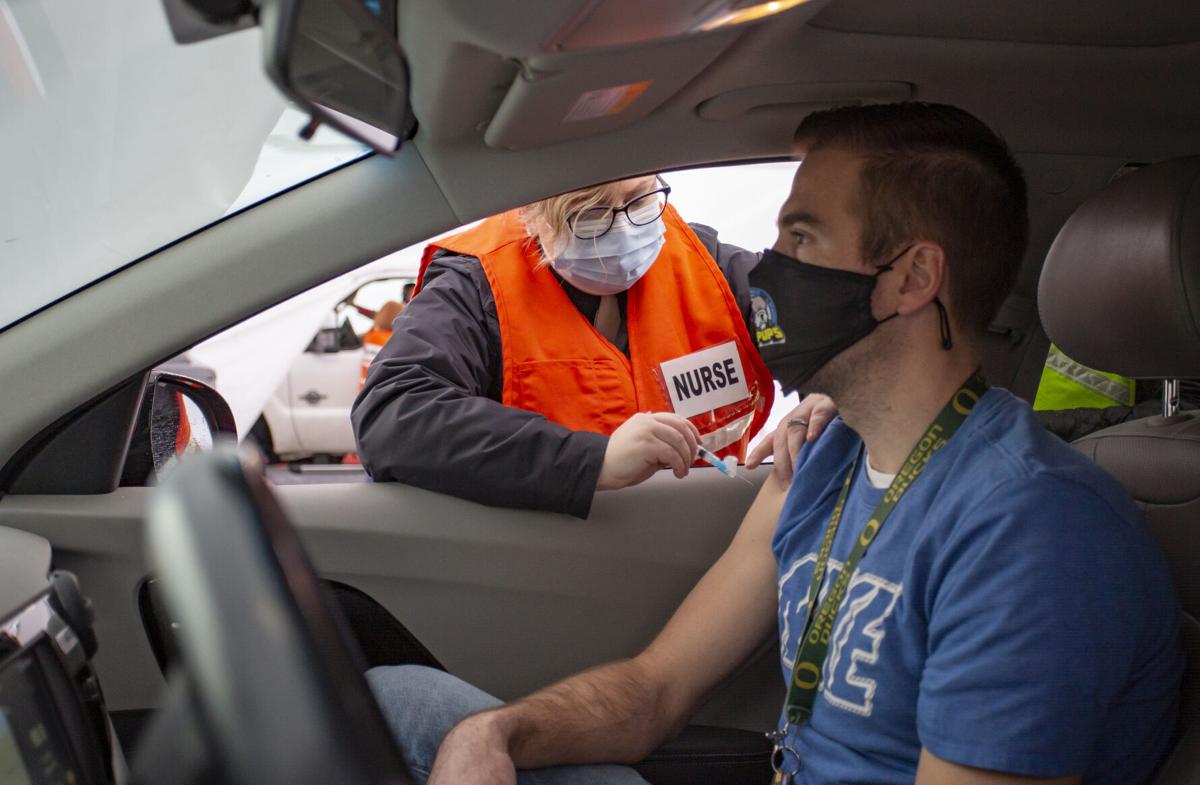 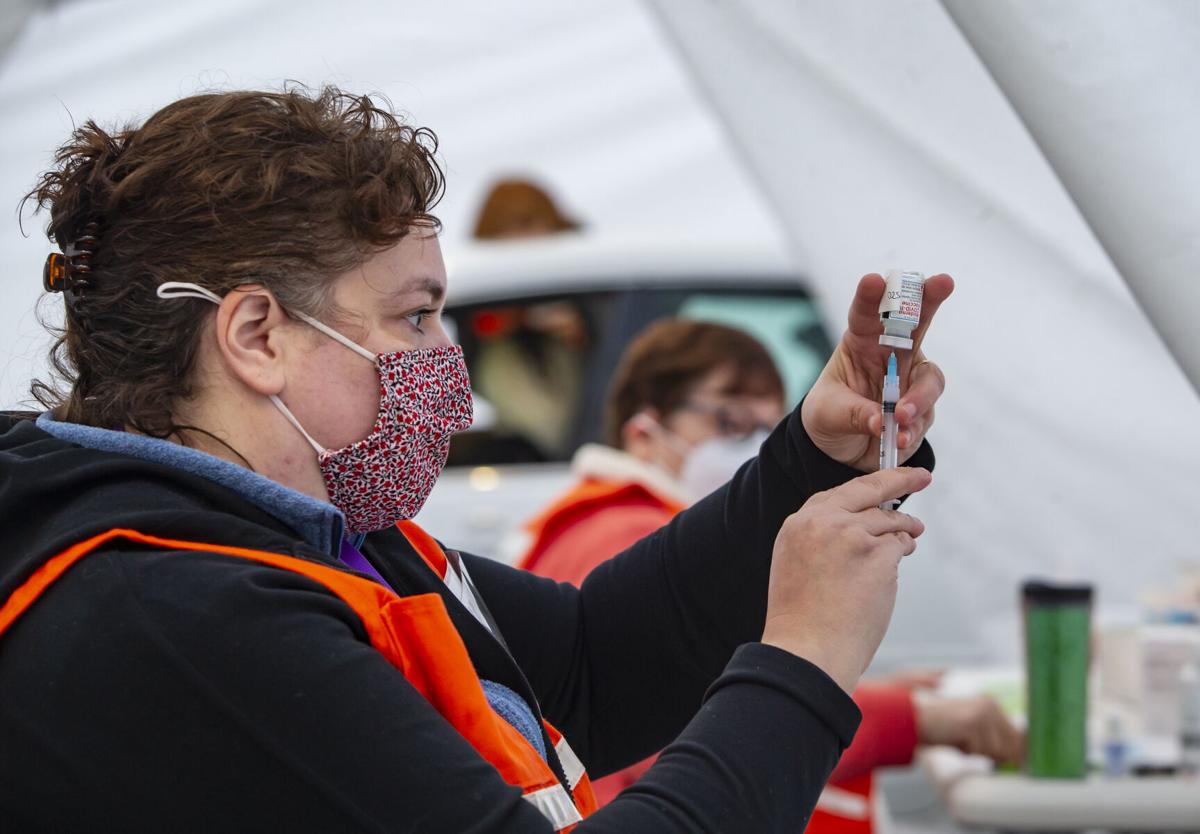 Jennifer Kelso, a registered nurse with the Hermiston School District, draws up a dose of the Moderna COVID-19 vaccine during a vaccination clinic at Hermiston High School on Friday, Jan. 29, 2021. Senior citizens who showed up that day were told they weren’t eligible yet.

Cars drive through a COVID-19 vaccination clinic at Hermiston High School on Friday, Jan. 29, 2021. The clinic was aimed at teachers on the west side of the county following a similar event in Pendleton the day before.

Vehicles line the parking lot at Hermiston High School as teachers wait to receive their first dose of the COVID-19 vaccine on Friday, Jan. 29, 2021.

Jennifer Kelso, a registered nurse with the Hermiston School District, draws up a dose of the Moderna COVID-19 vaccine during a vaccination clinic at Hermiston High School on Friday, Jan. 29, 2021. Senior citizens who showed up that day were told they weren’t eligible yet.

Hermiston High School’s parking lot has been mostly empty for the past year, but on Friday, Jan. 29, a long line of vehicles snaked through it, ending at a set of white tents.

Inside the tents, drivers rolled up their sleeves and nurses reached through car windows to deliver doses of the COVID-19 vaccine.

Bri Silva, operations manager for Little Tots Daycare & Preschool in Hermiston, was taking selfies while she waited in line, barely able to contain her excitement.

After previously limiting vaccinations to categories such as health care workers and nursing home residents, Oregon opened COVID-19 vaccinations to people working in education and child care on Jan. 25. Umatilla County officials estimated they had enough doses to vaccinate about 25% of the county’s educators during the Hermiston clinic and one held the day before in Pendleton.

Silva said she was getting the vaccine as soon as she was eligible to protect not only herself but her coworkers, the children she cares for and the families they go home to — most of which aren’t eligible to receive the vaccine themselves yet.

If the daycare requires children to be vaccinated against childhood illnesses, such as measles, to attend, Silva said, it’s only fair that she does her part to get the vaccines she qualifies for.

“It’s not political,” she said. “We’re not being Republicans or Democrats, we’re just being healthy.”

With limited supplies, the county requested that each school district prioritize 25% of its employees for the first week, and suggested an emphasis on those working with special education students and teachers for the youngest grades that will return to the classroom first. So educators in that first round were blazing the way for coworkers who will get their turn in the next couple of weeks.

Cori Applegate, a Hermiston teacher, admitted as she waited in line that she was a little nervous about receiving a vaccine that was so new, but afterward, as she waited in her car for the requisite 15 minutes of observation, she gave a thumbs up and said she was feeling good.

“It’s going much smoother than I expected,” she said of the clinic.

She said she has gained a lot of new ideas and new skills during her time teaching virtually, but it’s just not the same as being in a classroom with students, and she looks forward to the day they get to be together in person again.

Tavin Hamm, who teaches at Armand Larive Middle School, said she wished that her grandparents and other loved ones were already able to be vaccinated, but she was grateful for the opportunity. She said she waited about 45 minutes in line before receiving her dose.

“I’m not nervous,” she said. “My mother is a nurse practitioner and I got a lot of assurance from her.”

Not everyone who showed up at the clinic was allowed one of the more than 450 vaccine doses available. Over the first hour, several people peeled away from the main line after speaking with a screener and being told the event was only for educators and people in the Phase 1a category, which includes health care workers and people in nursing homes.

He said he planned to return when he is allowed. The state plans to begin allowing seniors ages 80 and up to receive the vaccine on Feb. 8.

Joe Fiumara, Umatilla County Public Health director, said he had seen a lot of people over the age of 65 show up to the clinics held Jan. 28-29, mistakenly believing Oregon is vaccinating seniors now. But the county is following the timeline set by the state, which dictates that educators are in line before seniors and those with underlying conditions.

Some counties that tried to vaccinate seniors before February, including Morrow County, had their shipments of the vaccine canceled and redirected to counties not done vaccinating Phase 1a people yet.

Some vaccine clinics around the United States have at times vaccinated people who don’t fit their state’s eligibility requirements in order to use up doses that would otherwise expire. Fiumara said some people had shown up at the end of the previous day’s clinic in Pendleton in the hopes they would get lucky.

He said there have been a few doses given out that way in the county, but it is rare. The county doesn’t open a 10-dose Moderna vial unless there are eligible people present to receive the vaccine. And if there are handful of doses left in the last vial for the day with no more eligible people in line, those doses have usually gone to the health care workers running the clinic, who qualify under Phase 1a. During Hermiston’s clinic Friday, for example, Fiumara said there were four workers who were ready for their second shot but had not yet gotten it, so they would be the priority if there were a couple of doses left after the last eligible driver in line was vaccinated.

Teachers who got vaccinated on Jan. 29 in Hermiston can return to a clinic in the same location that will take place 28 days later to receive their second dose.

“People need to go back to where they got their first dose, because that is who got their second dose (from the state),” Fiumara said. “Every time we set one of these up, it’s paired with another one in 28 days, and everyone here gets a flier with that information.”

Educators in some parts of the country have stated they won’t be willing to return to the classroom until they are fully vaccinated, but Hermiston School District plans to start returning kindergarten and first grade students to the classroom in mid-February, before teachers have had an opportunity for their second dose of the vaccine.

Laurel Woodward of Hermiston Association of Teachers said in an email that “Access to a full course of the COVID-19 vaccine will bring a great sense of relief to many educators working in Hermiston schools, and will help keep our students and communities safe as we bring kids back to the classroom.

“Of course, HAT would have preferred for Governor Brown to have prioritized vaccinating senior citizens and Oregon’s most vulnerable rather than her push to quickly reopen schools, but this is the course she has chosen. We are committed to continuing to serve our students during this transition, and we will work with the state and the district to ensure our return to in-person instruction is as safe as possible,” she wrote.