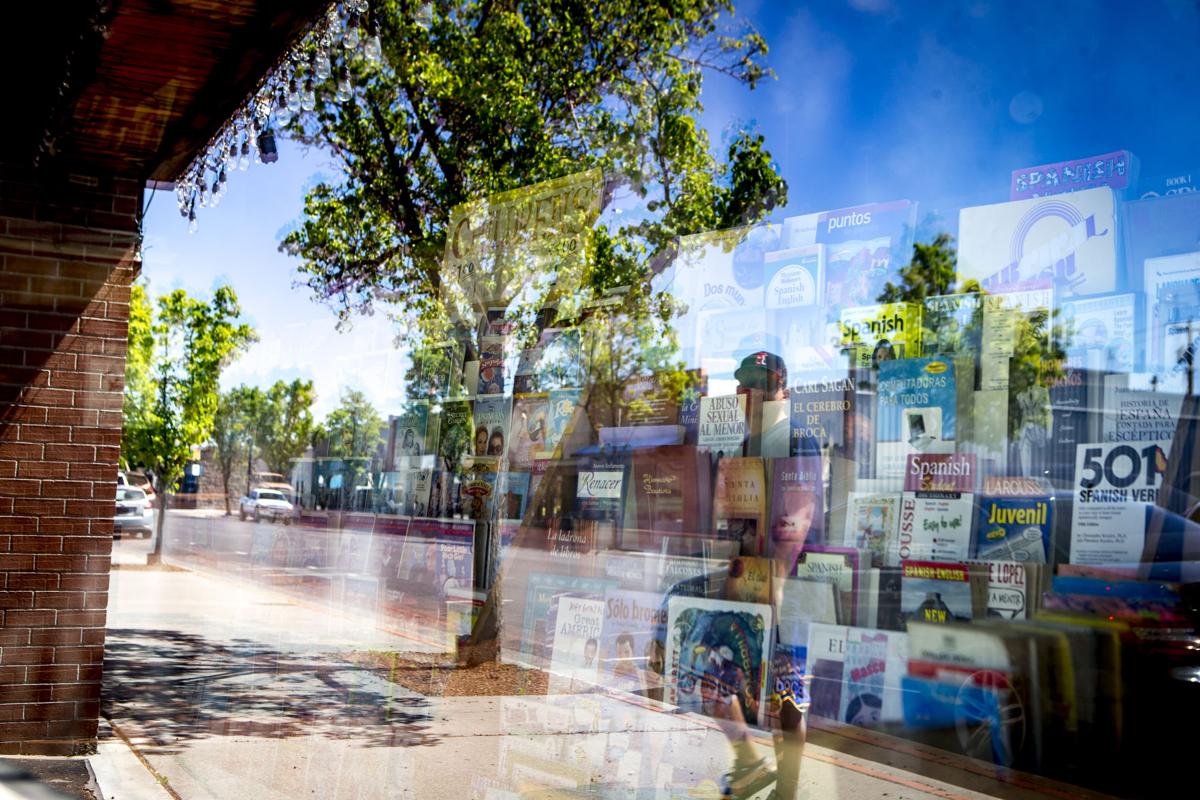 A passerby is reflected in the window of Neighborhood Books & Gifts in Hermiston on Monday afternoon. The business, which has been closed under the governor’s stay-home order, is among those left out of the initial iteration of the Paycheck Protection Program. 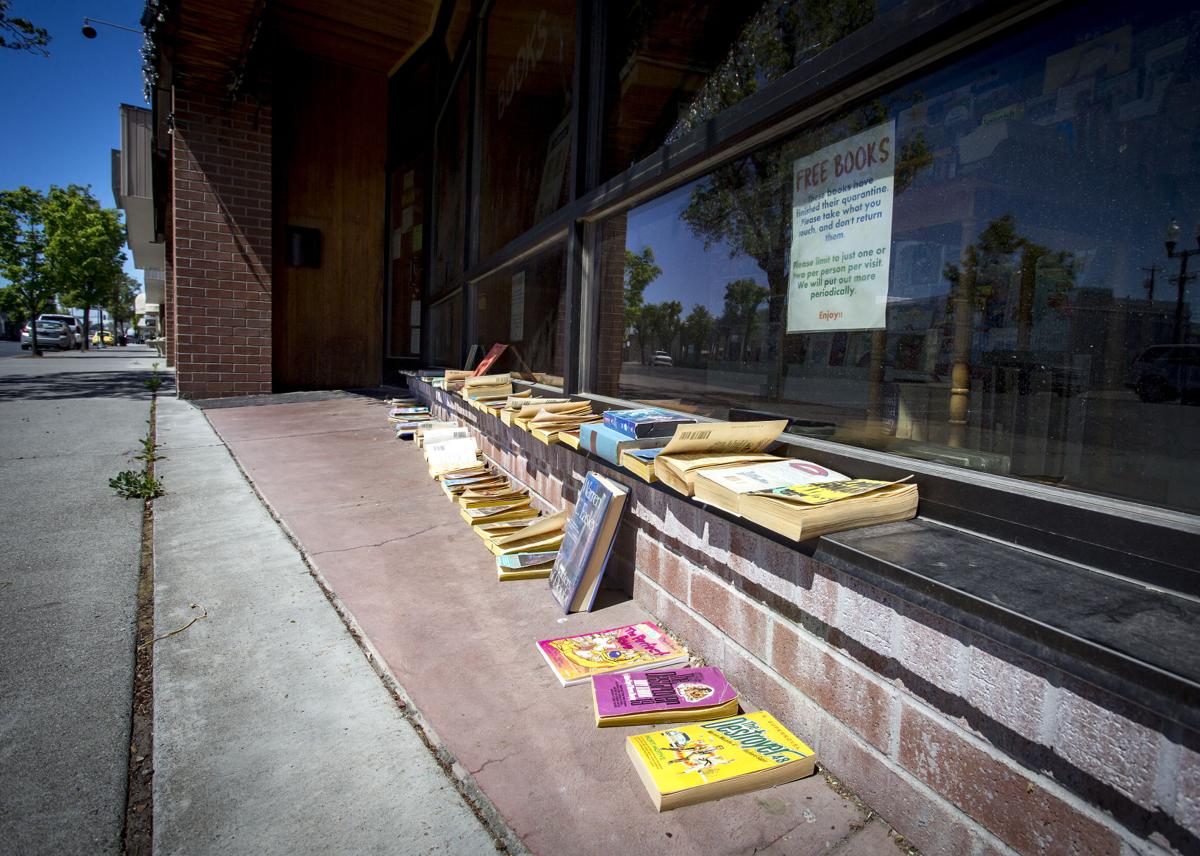 Free books sit on the front windowsill of Neighborhood Books & Gifts in Hermiston on Monday afternoon. The sole proprietorship was among those businesses left out of the initial iteration of the Paycheck Protection Program.

A passerby is reflected in the window of Neighborhood Books & Gifts in Hermiston on Monday afternoon. The business, which has been closed under the governor’s stay-home order, is among those left out of the initial iteration of the Paycheck Protection Program.

Free books sit on the front windowsill of Neighborhood Books & Gifts in Hermiston on Monday afternoon. The sole proprietorship was among those businesses left out of the initial iteration of the Paycheck Protection Program.

As stimulus money helps prop up the economy, sole proprietors are getting left out of some types of help.

The Paycheck Protection Program, for example, was launched to provide loans to cover payroll, rent and utilities, which can be forgiven if up to 75% of the money is spent on payroll. The initial guidelines left business owners without any employees out in the cold at first, and by the time the program was opened up to them a week later, the money was gone before those in the back of the line got anything.

Judy Gormley, who owns Neighborhood Books & Gifts in Hermiston with her husband, Michael, said she was still waiting to hear back from their accountant on questions about whether they qualify to apply for an Economic Injury Disaster Loan, which is also currently out of money.

“It’s really hard to get good information, because it’s all new,” she said. “Even the banks don’t know. It takes a lot of time to figure out. I spent hours a couple of weeks ago.”

Thursday afternoon Gormley said she was waiting to hear back from Umatilla County about whether Neighborhood Books & Gifts would get one of the county’s grants for small businesses affected by COVID-19, which were being awarded by random draw. An hour later she called back with good news — the bookstore will get $1,000 from the county.

“That does help a huge amount,” she said.

Bookstores weren’t specified by name in Gov. Kate Brown’s executive order of March 23 shutting down nonessential businesses, but the Gormleys closed along with neighboring stores on Main Street selling furniture, jewelry and other goods that were named in the order. Gormley said they felt that they fit within the spirit of the order for people to only leave their house for essential reasons, they didn’t want to aid in the spread of COVID-19, and she and her husband fall into a senior age category that put them at additional risk.

She said they are lucky to have retirement money to live on, “but as far as the business goes, there’s nothing to pay the insurance and utilities and rent.”

They’ll put their personal stimulus checks into the business to supplement whatever isn’t covered by the county’s $1,000 grant, including safety upgrades to reduce contact with customers during transactions when they reopen sometime in the future.

“We’re covering that on our own, but we feel it’s worth it,” she said.

Bonnie and Glenn Greiner have been doing a little bit of work for their upholstery side business at home, but their retail shop, Wild Goose Design in Hermiston, had to close its doors under the March 23 executive order.

Bonnie said she has been posting pictures of items to the Wild Goose Design social media pages, along with a phone number people can call for delivery or curbside pickup, but so far they’ve only sold two items that way.

“I’ve been posting on Facebook and Instagram, but I don’t have a big following, and when you don’t have money it’s hard to buy ads on TV or radio or in the paper,” she said.

She said it’s been “really kind of a challenge” trying to find grants that business owners without employees can apply for to cover a shop’s rent and other costs that still pile up even with the doors closed. Self-employment can also make it difficult for people to qualify for benefits, such as unemployment and health insurance.

Still, she said she was optimistic that “this too shall pass,” and she wouldn’t want to say that her situation was worse than anyone else’s.

“I know it’s a challenge for everyone,” she said. “Everyone’s having to deal with something. I’m glad I don’t have small children at home.”

Not all small businesses will survive the challenges presented by COVID-19. Cynthia Traner, who runs Her Shabby Shed in Hermiston, said the vintage shop is done for good.

“This was the final cherry on the cupcake for me,” she said. “I’m not opening again.”

She said she hadn’t been making enough money from the business to draw a paycheck before the pandemic hit, and she knew she wasn’t going to be a good candidate for loans and other help for the business in that situation. She still has plenty of inventory left over that she hopes to take on the road at some point in the future once big vendor shows like Junk Barn Girls start happening again.

Traner said it was frustrating to see entire families crowding into large stores like Walmart, and yet the hair stylist across the street who serves one customer at a time is ordered to close.

“I see it both ways,” she said. “My heart really aches for people who have lost loved ones, and my heart goes out to first responders and hospital workers on the front lines, but it seems (the government) could do something to let these little mom and pop shops reopen.”

Umatilla County has awarded the grants that were available to small businesses affected by COVID-19. Businesses with fewer than 26 employees were eligible for the $1,000 grants.

The number of grants awarded in each city was based on population, and then those spots in each city were awarded by lottery draw. According to the county, a total of 137 businesses applied.

Gail Nelson, economic development director for the county, said the funds were meant to help fill in gaps between state and federal funds that could assist businesses with rent and other necessities.