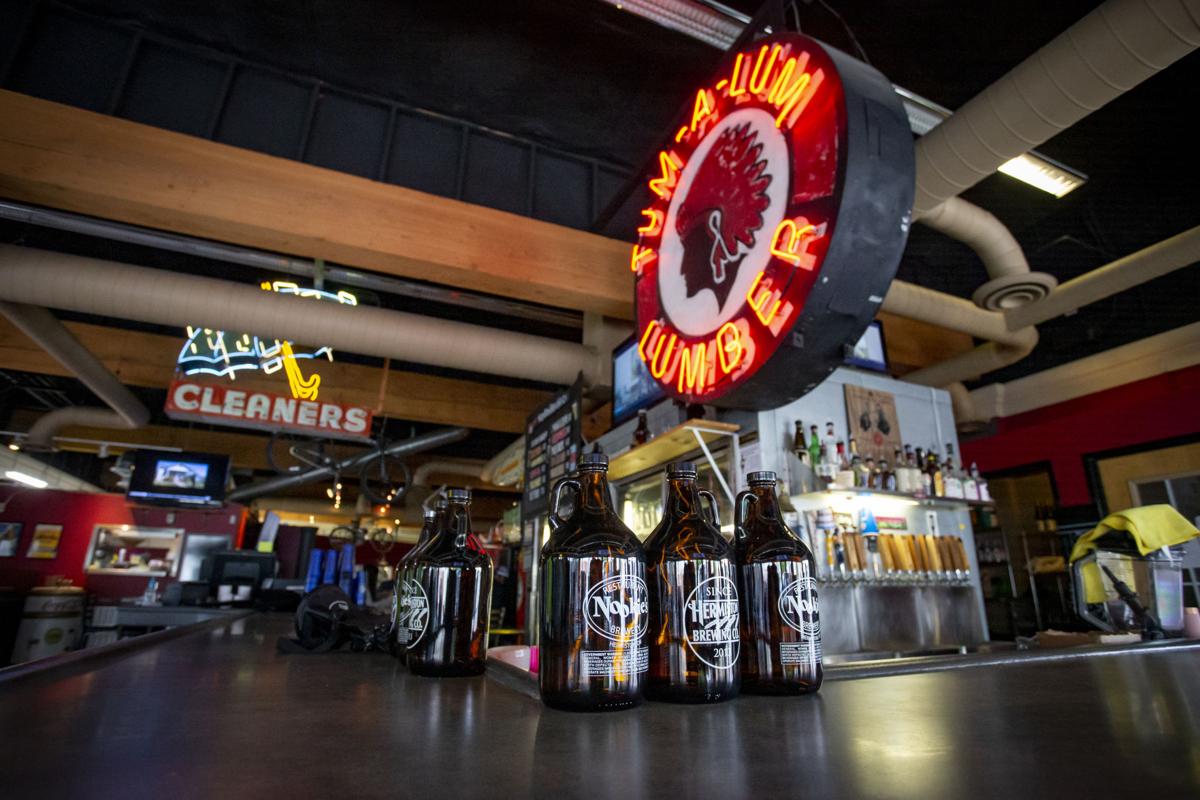 Growlers sit on the bar top at Nookie’s Restaurant and Brewery in Hermiston in May. The restaurant is one of several that has had to hire new staff after reopening. 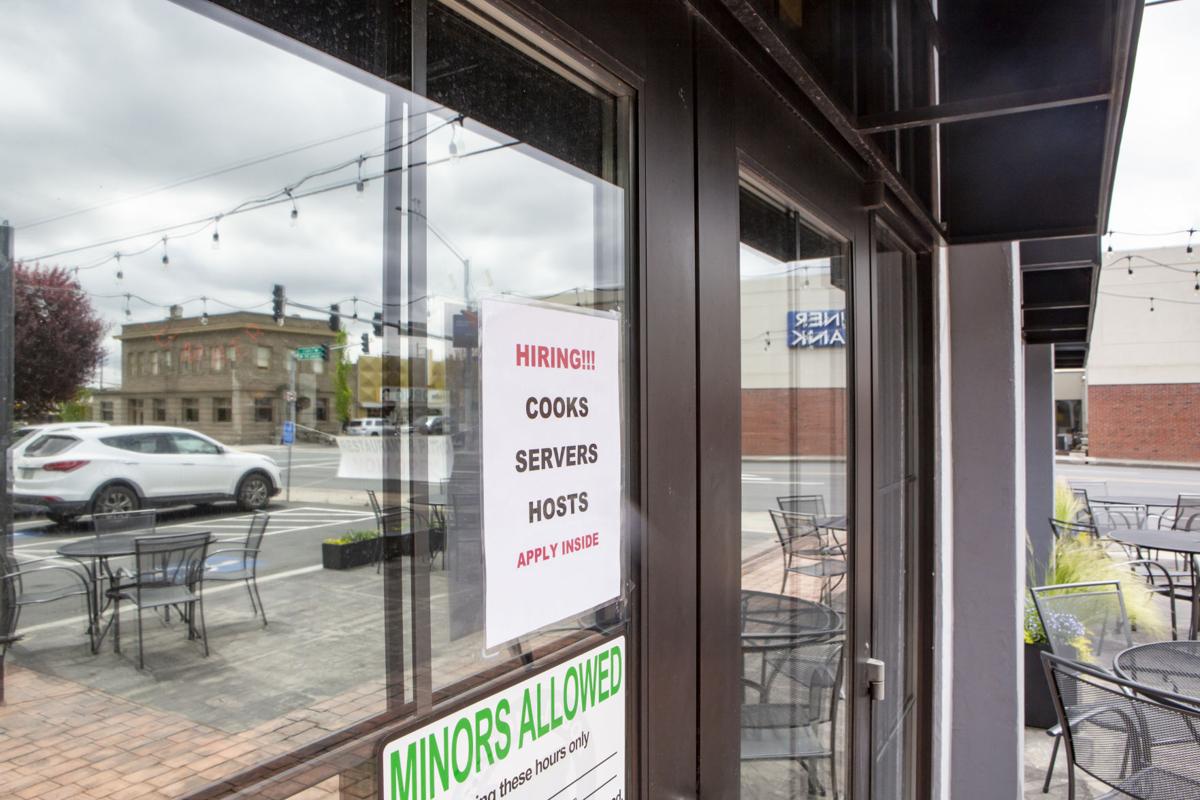 A hiring sign taped to the front of Nookie’s restaurant in Hermiston in May is one of many seen around town since restaurants reopened. 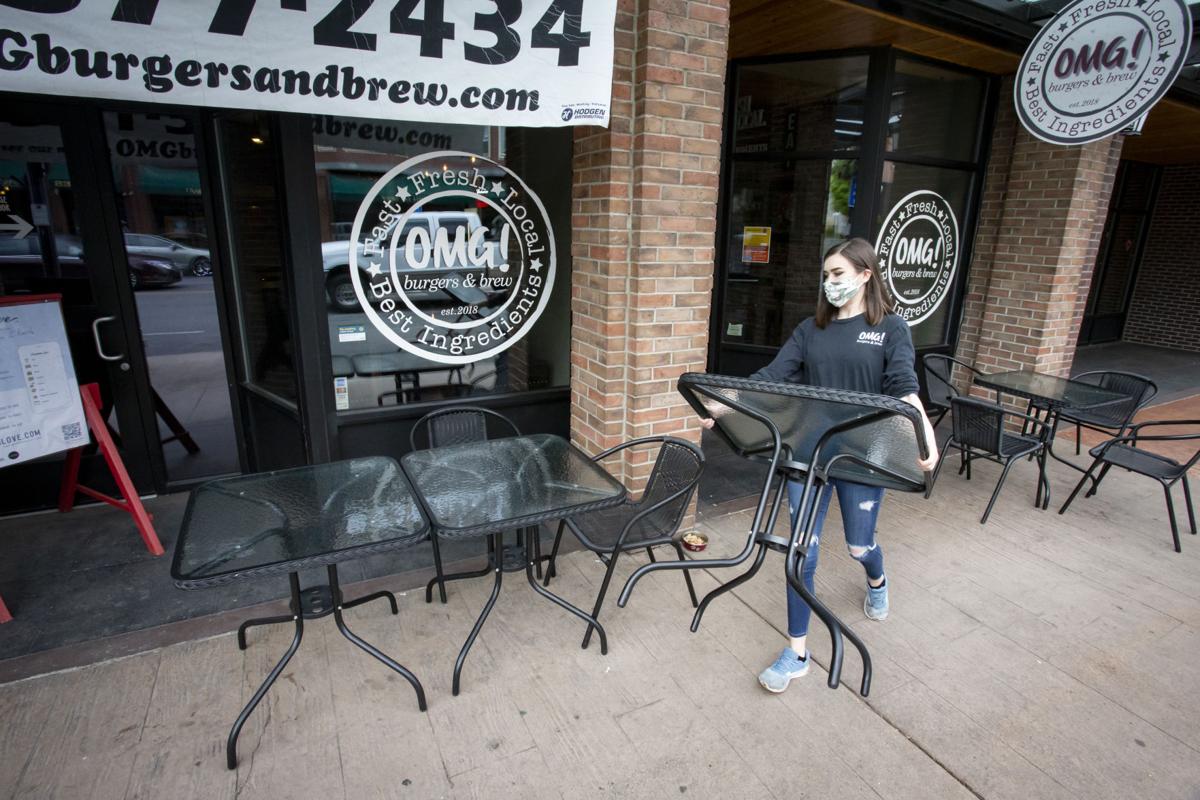 Reannah Thurman sets up outdoor seating at OMG! Burgers & Brew in downtown Pendleton on May 15, 2020, as the restaurant prepared to open for dine-in service.

Growlers sit on the bar top at Nookie’s Restaurant and Brewery in Hermiston in May. The restaurant is one of several that has had to hire new staff after reopening.

A hiring sign taped to the front of Nookie’s restaurant in Hermiston in May is one of many seen around town since restaurants reopened.

Reannah Thurman sets up outdoor seating at OMG! Burgers & Brew in downtown Pendleton on May 15, 2020, as the restaurant prepared to open for dine-in service.

Hermiston and other Eastern Oregon restaurants, bars and hotels said they are happy to be back, with many reopening their dining room floors, hiring additional staff members and rehiring old ones too.

Service staff — cooks, dishwashers, servers and bartenders — were among the hardest-hit when the pandemic closed down restaurants across the state, but now “We’re Hiring” signs are popping up on restaurant windows around Hermiston.

“We’re thrilled to have been able to reopen our Bistro ... and our guests have been excited about that, too,” Oxford Hotel and Suites senior marketing manager Lorealle Bishop said.

With counties moving into Phase 2 of reopening, the Oregon Employment Department anticipates more jobs gained, in both Oregon and Umatilla County, after COVID-19 layoffs sent the economy reeling.

Projections Economist Felicia Bechtoldt said the Oregon Employment Department anticipates Umatilla County will continue to gain jobs in industries that were hardest hit, such as restaurants and other businesses in the hospitality industry.

“We anticipate the unemployment to decline a bit and we anticipate some jobs that were lost to be added back, in particular leisure and hospitality,” Bechtoldt said. “That’s the quickest and largest impact to gaining some of the jobs back.”

Currently, The Pheasant is looking to hire a part-time bartender. General Manager Deanne Jensen said their restaurant has been busy since reopening, which contributes to an increase in hiring to fill the demand.

“Business wise, we are busy, busy, busy,” Jensen said. “We’re trying to get back to as normal as we can or the new norm. We appreciate everyone’s business and their support.”

Jensen also added that she’s talked to customers coming up from Tri Cities, which has helped contribute to business and the flow in the service industry economy.

Although restaurants are reopening, not all of their pre-pandemic staff are coming back. Some restaurant owners said they could not rehire previous staff members for several reasons, mainly because some are either pursuing other avenues, or because the unemployment compensation seems more certain and safe than working in a restaurant mid-pandemic.

When it comes to employment challenges, a few restaurants, including Shari’s in Hermiston and Prodigal Son Brewery & Pub in Pendleton, noted transitions of employment and safety.

Co-owner of Prodigal Son Brewery & Pub Tim Guenther said some are afraid of serving the public and noted that service staff are especially vulnerable because they interact with a lot of customers throughout their shift.

Shari’s manager Becky Jones said the newly reopened jobs are “definitely different” than before the pandemic.

“The masks, we’re definitely not used to that,” she said. “The gloves, we’ve had challenges, but we’re on board with it.”

Other hospitality businesses said they have not only rehired their old workforce, but have added additional jobs on the payroll. In Oxford Hotel and Suites’ Hermiston location, the hotel is currently hiring cooks, housekeepers, maintenance staff and front desk agents.

In May, Oregon was able to regain 22,500 nonfarm payroll jobs, and one out of 10 jobs were recently added back that were cut in April, according to reporting by the state. The unemployment rate statewide decreased from 14.9% to 14.2% and is expected to keep decreasing in the coming months.

In Oregon, beside leisure and hospitality, industries that gained jobs in May were mainly health care and social assistance. Bechtoldt said she anticipates a hiring surge in the coming months in construction, manufacturing, and retail and trade. As more nonessential businesses reopen, jobs in restaurants, shops, hair salons and other retailers also should become available.

“As far as other industries, we expect some jobs to return but it’s too early to say what the long term impact COVID-19 will have on the local economy,” she said.

Although Oregon has seen job gains, Bechtoldt said there were still substantial job losses in Oregon, more specifically in government and education.

Permanent job losses, jobs that no longer exist, are going to take a long time to regain.

“I think statewide it’s going to take a long time to recover all the jobs that have been lost in the three months,” she said. “This is a historic loss and Oregonians are suffering the economic realities of being unemployed.”

The employment department has been experiencing high volumes of calls and delayed payments, but Bechtoldt noted their worksource centers are ready to provide job seekers with services and additional assistance.