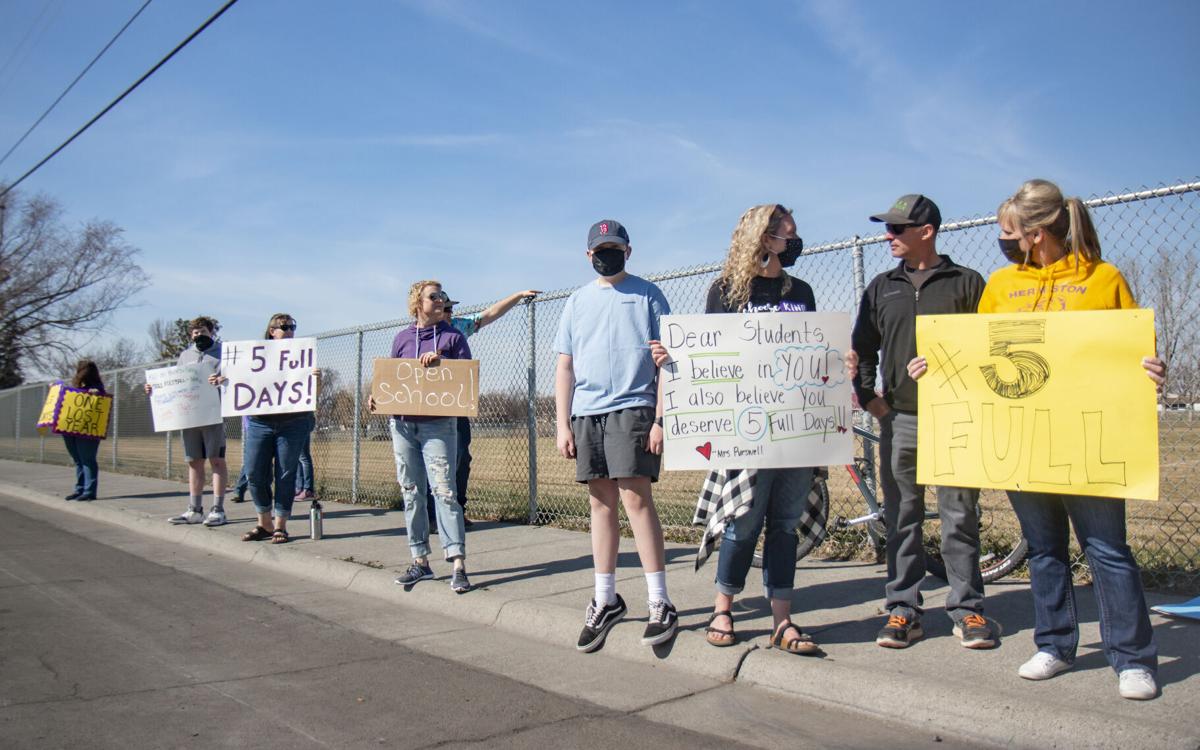 A group of parents, teachers and students hold signs along West Highland Avenue in Hermiston on Saturday, March 13, 2021, during a rally in favor of a full return to in-person schooling. 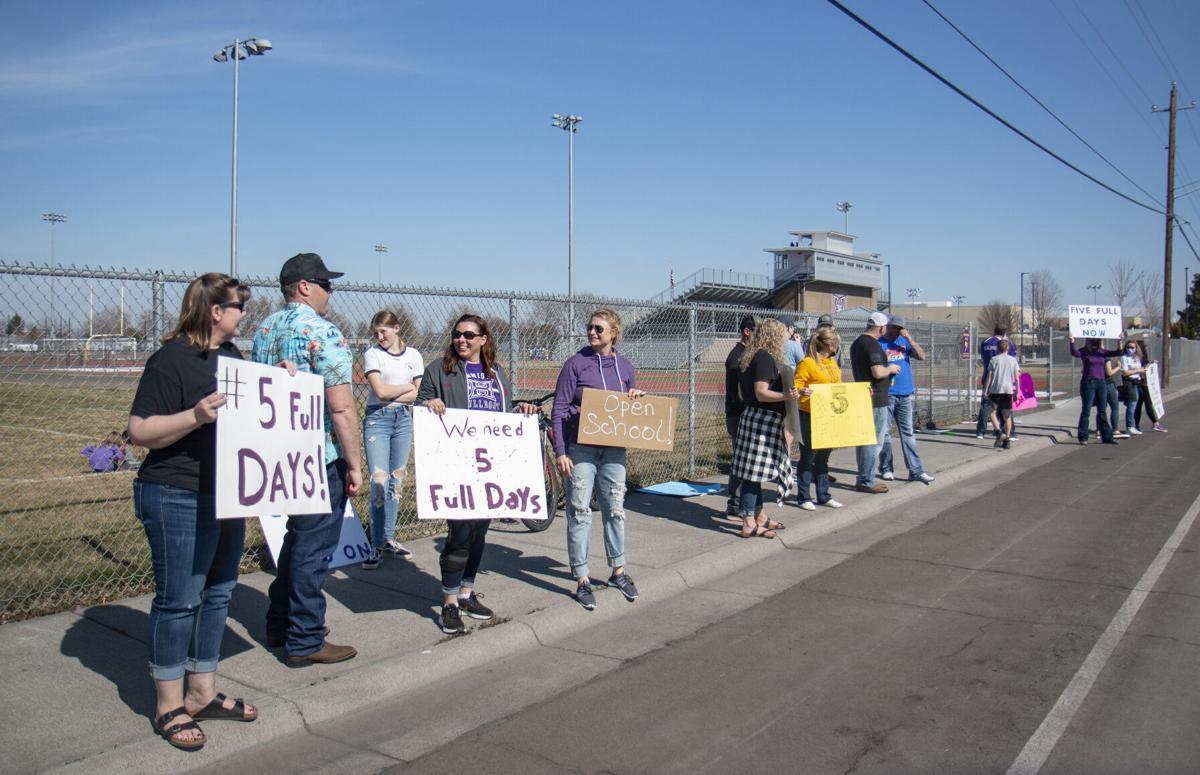 Parents, teachers and students stand along West Highland Avenue outside of Hermiston High School with signs encouraging the full return to in-person classes on Saturday, March 13, 2021.

A group of parents, teachers and students hold signs along West Highland Avenue in Hermiston on Saturday, March 13, 2021, during a rally in favor of a full return to in-person schooling.

Parents, teachers and students stand along West Highland Avenue outside of Hermiston High School with signs encouraging the full return to in-person classes on Saturday, March 13, 2021.

Garett Robinson stood with his brother and a friend beside the fields bordering Hermiston High School, each holding signs calling for an end to a monotonous year with one message in common — “five full days.”

The three boys were part of a group of more than two dozen people who gathered for a rally at the high school on Saturday, March 13, calling for changes in state coronavirus guidelines that are preventing students from fully returning to in-person classes. The rally marked the one-year anniversary of students’ last day of classes before schools across Oregon were shut down in 2020.

“We’re not learning as much. We’re going to be pretty much behind next year,” said Robinson, who will get to return to the classroom at Armand Larive Middle School part time on Monday, March 22.

Robinson enjoys school. He likes science, spending time with teachers, having fun with friends and “becoming smarter so you don’t fail when you get older.” But finding help during online-school has been challenging, he said, and he misses sports and his friends.

Oregon Department of Education rules currently require school children and employees to stay 6 feet apart while in a school, with at least 36 square feet of space for each student in a classroom. That means a classroom can only have about 10 to 12 students at a time, roughly half the size of a normal classroom.

Shane Robinson, Garett’s father, who helped organize the rally, said he’s concerned those rules will keep students from the classrooms through the coming months.

“If that’s going to carry through to the fall, they’re not going to see a full day of school on a consistent basis,” he said. “You can’t do it. Not with the spacing we have. Unless you’re going to magically rebuild schools overnight, it just isn’t going to happen.”

The rally took place a day after a top public health official announced in a press conference on Friday, March 12, that the state was considering reducing required distancing in schools from 6 feet to 3 feet, which would allow students to get more hours of in-person instruction.

However, Dean Sidelinger, Oregon’s epidemiologist, said the state would only do so in a gradual manner. Afterward, on Monday, March 15, the Oregon Department of Education released updated guidelines that altered some rules, but left the 6 foot one in place for now.

“I think gradual approaches are appropriate,” said Josh Goller, board chair for the Hermiston School District. “But at the same time, waiting until the fall to get to a full day of school is not appropriate.”

Federal officials in recent weeks have urged schools nationally to bring students back to the classroom, citing statistics showing it is safe to do so if health and safety guidelines, such as mask wearing and physical distancing, are consistently maintained in both the school and the broader community.

Goller said he believes that, by maintaining health and safety guidelines, schools can be open on a bigger scale sooner rather than later.

“Is there potential risk involved? Perhaps,” Goller said. “But a slightly-reduced physical distancing, combined with masks and cohorts that are perhaps a little bit larger to facilitate more student movement in the building, those sorts of things” can keep schools safe.

Amy Robinson, a teacher in Umatilla who is married to Shane, said that several of her students who take care of their siblings are “failing miserably.”

“We’re sending kids out into the world who are missing a year to a year and a half of school, and that’s just not OK,” she said.

She said some of her students struggle with mental health problems, and when hybrid classes began last week in Umatilla, it was clear that staying at home had made them more socially awkward.

Like many people at the rally, Mooney said that current rules, requiring students and employees to stay 6 feet apart and only have contact with small “cohorts” of people at the school, are preventing students from returning to school full time.

“At this point, if there isn’t a relaxing of the guidance around the square footage per-person in classrooms, and the cohort size, we can’t go any further,” she said. “It’s really those two restrictions that are going to keep us from having our students back in classrooms.”

Last week, Oregon Gov. Kate Brown announced in a press conference that she was ordering public schools to reopen by mid-April. That announcement, however, didn’t change plans for Umatilla County school districts like Pendleton, where K-5 students had returned to hybrid schooling (part online, part in person) and plans were already in place to bring back middle and high school students soon thereafter. Most smaller districts have already brought back all grades.

Hermiston’s K-5 students have already started hybrid classes, and middle schoolers and high schoolers will soon join them in the coming weeks. Mooney said the school district has implemented a variety of health and safety protocols and sanitation services that will allow students to return to classes safely.

With hybrid classes beginning soon, and football having started weeks ago, Elijah Robinson, Garett’s older brother, said he’s enjoyed seeing his friends again and is excited to see more. However, with some school still online, he’s still worried about how things will go.

“If the format’s the same as online learning, it’s still going to be pretty, overall, just — you’re still gonna get no help after class and what not,” he said. “You get to see your friends, but it’s not close to what five days will be like.