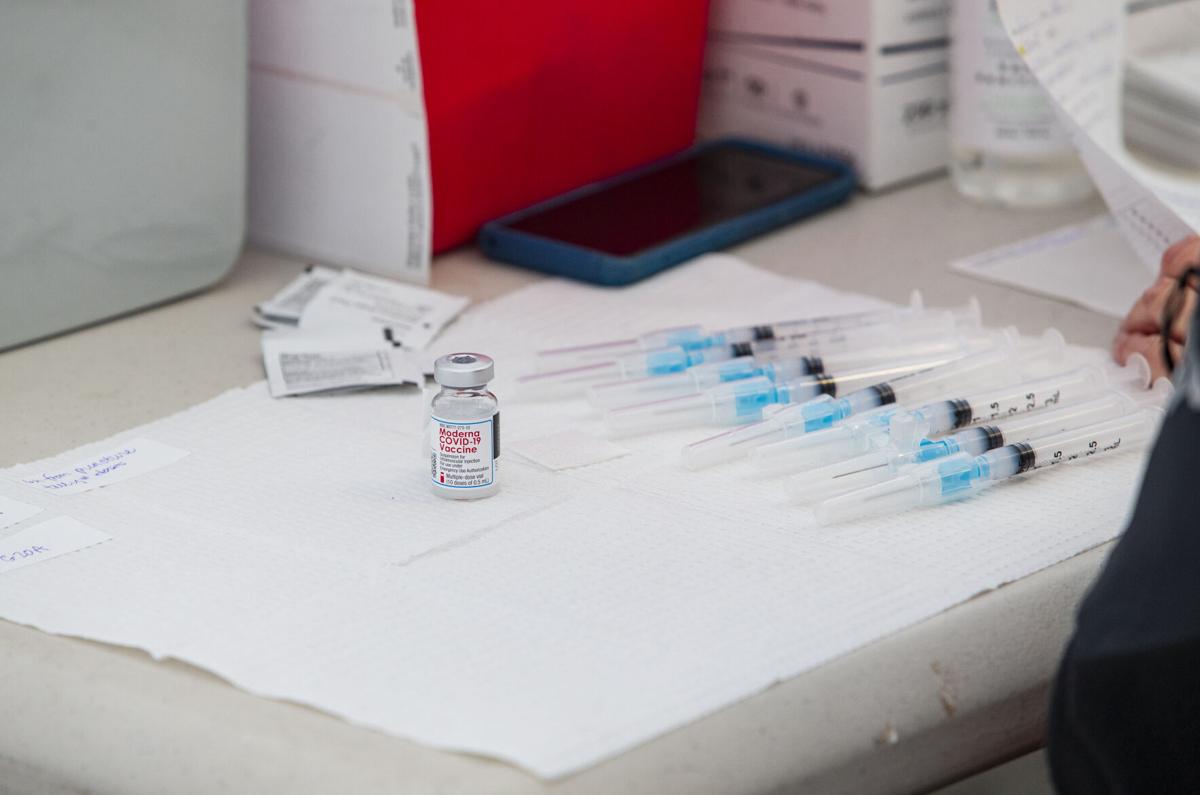 A vial of the Moderna COVID-19 vaccine sits alongside syringes at a Umatilla County Public Heath drive-thru vaccination clinic at the Pendleton Convention Center on Jan. 28, 2021. 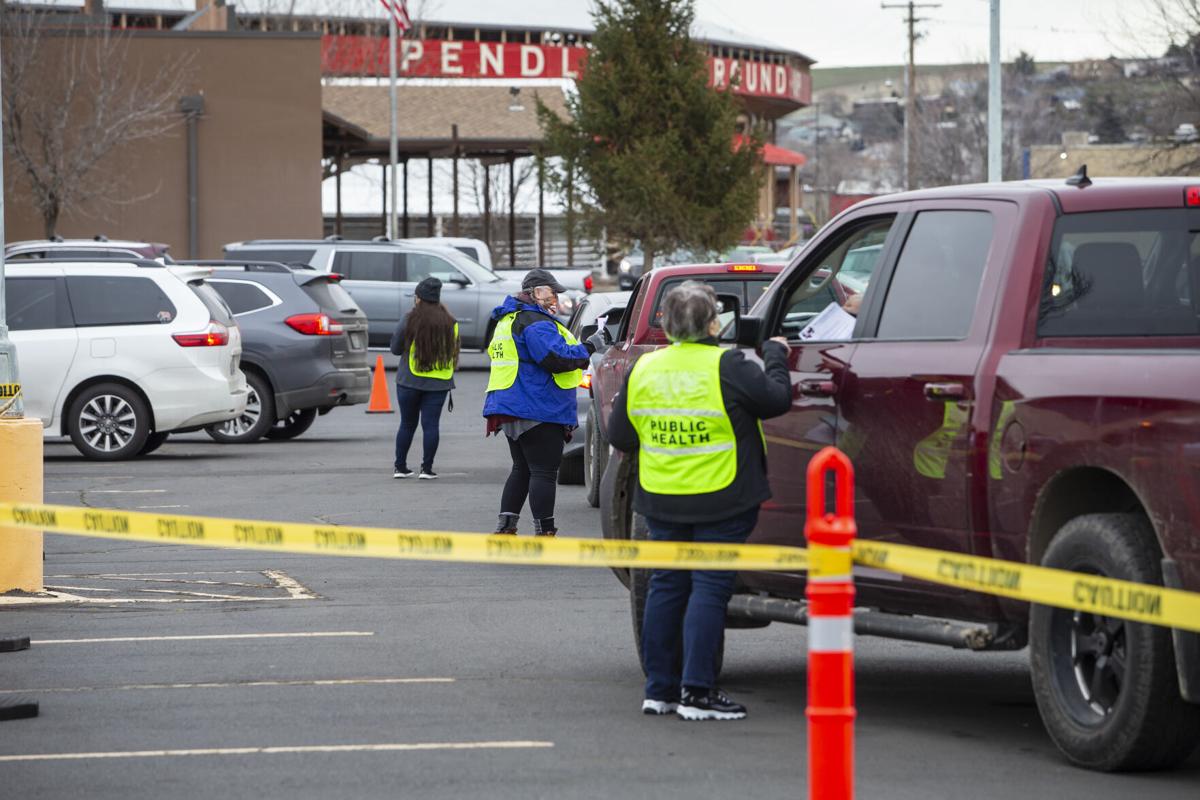 Volunteers check eligibility and distribute information to those seeking a COVID-19 vaccine at the Pendleton Convention Center on Jan. 28, 2021.

A vial of the Moderna COVID-19 vaccine sits alongside syringes at a Umatilla County Public Heath drive-thru vaccination clinic at the Pendleton Convention Center on Jan. 28, 2021.

Volunteers check eligibility and distribute information to those seeking a COVID-19 vaccine at the Pendleton Convention Center on Jan. 28, 2021.

A boost in COVID-19 vaccine allocations Umatilla County health officials thought they would be receiving from now on turned out to be a typo.

Officials had received an email from the Oregon Health Authority promising counties across Oregon a sharp uptick in their weekly allocated COVID-19 vaccines — an increase from 700 doses to 2,400, including 1,600 more first doses of the Moderna vaccine.

With the new doses, Umatilla County health officials hoped to speed up the vaccination schedule after shipments and events had been delayed time and time again.

On Monday, March 1, however, Joe Fiumara, the county’s public health director, received some unfortunate news: The increase was a one-time shipment.

“Turns out it was a typo,” Fiumara said of the email from the state. “And 700 of those doses was a one-time boost because our per-capita rates were low. We’re expecting 900 (first doses) next week, not 1,600.”

In the email, state officials said nine counties would receive a one-time increased shipment of doses to improve their vaccination rates. However, according to Fiumara, the email only listed eight counties, and Umatilla County was the one left out.

“We thought that was the new (weekly) floor for us,” Fiumara said. He added that the typo was “frustrating” and “disappointing.”

Approximately 10,043 county residents have been vaccinated as of Monday, March 8, according to data from the Oregon Health Authority, placing it at second to last in vaccinations per capita.

“Us and our partners in the county have been pretty good at kicking our vaccine out as of seven days of having received it,” Fiumara said. “There’s been a few instances where it’s taken the second week to get rid of some stragglers, but we’ve pretty much kicked it out pretty fast. We just haven’t received enough” doses.

In response to the low totals, county officials last week sent a letter to Gov. Kate Brown’s office, claiming the state was failing at its promises to focus vaccine distribution toward vulnerable minority communities where infection has spread disproportionately.

“This is not due to a lack of capacity to vaccinate our residents. We have never even tapped the upper limits of our vaccine allocations,” the letter says. “While equity is high on Oregon’s agenda, this is an embarrassing and inexcusable contradiction.”

But there is reason to hope that things will soon begin to shift, Fiumara said. The county has a significant population of essential workers who will soon become eligible for the vaccine, which “in theory” should make it so the state allocates more doses toward the county, Fiumara said.

In addition, several new county businesses are to receive doses in the coming weeks, including Bi-Mart, Walmart and Rite Aid. Both Safeway and Mirasol Family Health Center are also expected to see larger shipments of vaccines than they have previously, Fiumara said.

The doses sent to those facilities are in addition to the 900 doses sent from the state to the county health department, he added.

“All of that is way more than we’ve been getting,” Fiumara said.

The county this week also received its first shipment of 100 doses of the Johnson & Johnson vaccine — a single-dose vaccine with an efficacy rate of 72% against moderate and severe cases.

Due to its effectiveness compared to that of the Pfizer and Moderna vaccine, which are each over 90% effective, some people have voiced skepticism about the new Johnson & Johnson vaccine.

Experts say that comparing these numbers is problematic. The trials were held at different places at different times where infection was spreading at different rates. That makes it difficult to judge if the lower percent is genuinely due to the product or the environment.

“It really isn’t an apples to apples comparison,” Fiumara said, adding that the efficacy rate for the Johnson & Johnson vaccine is still very high compared to a common flu shot. “And I know that makes it really tough for folks to understand.”

The new vaccine can also be stored in normal refrigeration for months, and because it is a one-shot immunization, health officials nationally have expressed enthusiasm that it will help the vaccine rollout immensely. Trials also showed the vaccine prevented 100% of hospitalizations and deaths related to COVID-19.

Fiumara said local Bi-Marts are now receiving the Johnson & Johnson vaccine, and health officials are now working with the businesses to help with their scheduling and procedures.

“For now, it has been approved with really good effectiveness rates, especially against severe illness,” Fiumara said. “Any way you look at any of these (vaccines), they are far better than anything a year ago we thought we would have.”