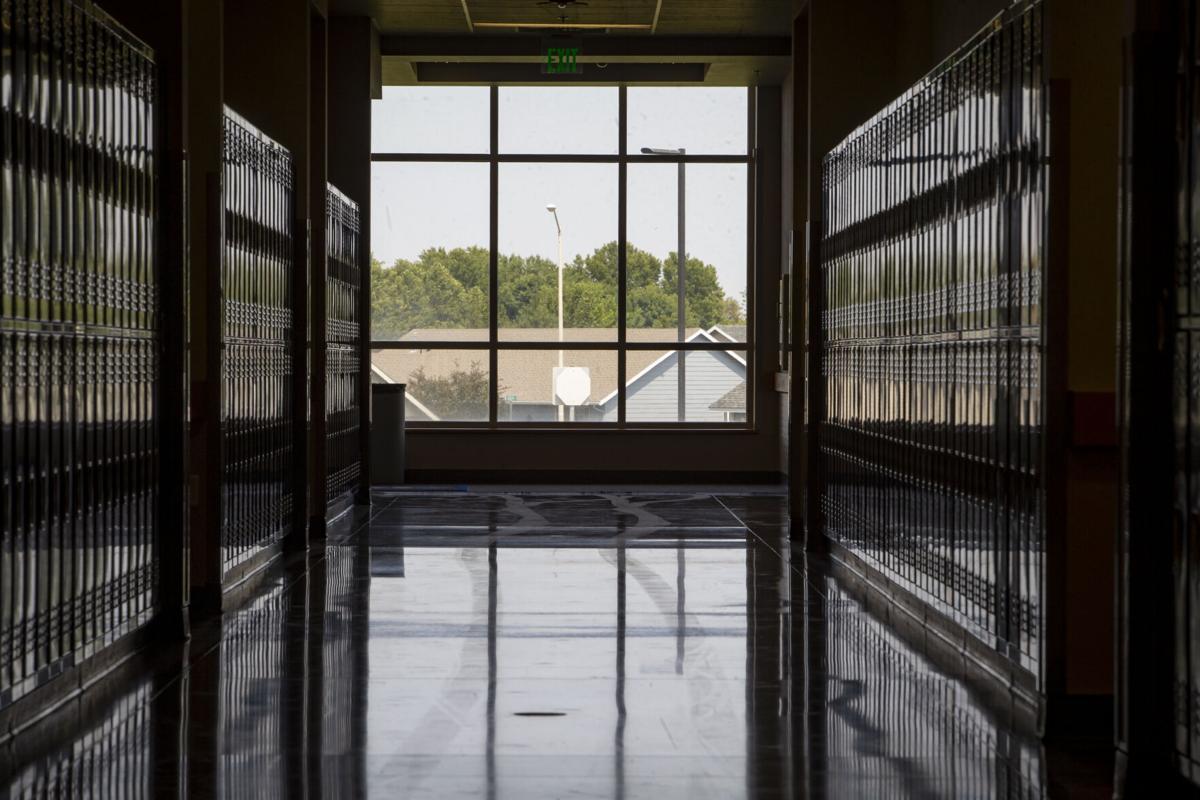 Hallways at Armand Larive Middle School and other schools throughout Hermiston will be empty to start the school year as the district looks to begin the school year with distance learning. 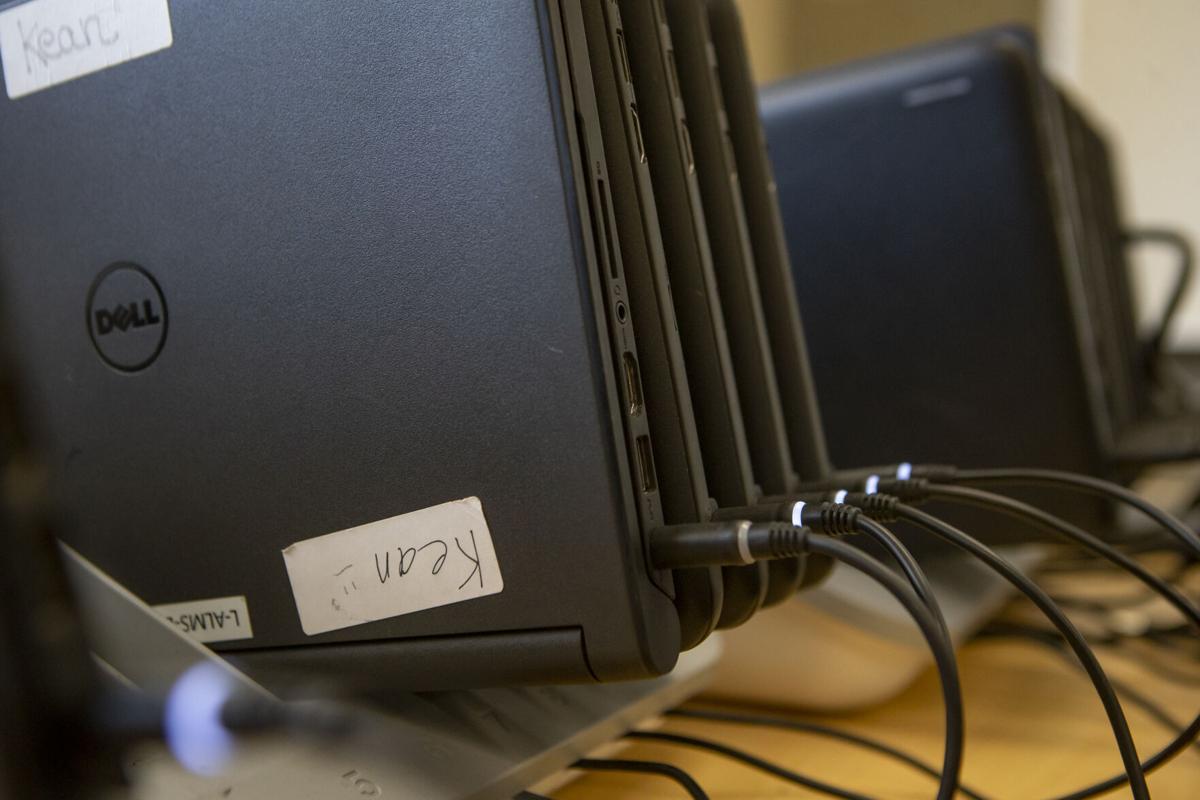 Laptops charge in a classroom at Armand Larive Middle School in Hermiston on Tuesday, July 28, 2020. The Hermiston School District will begin the year with distance learning. 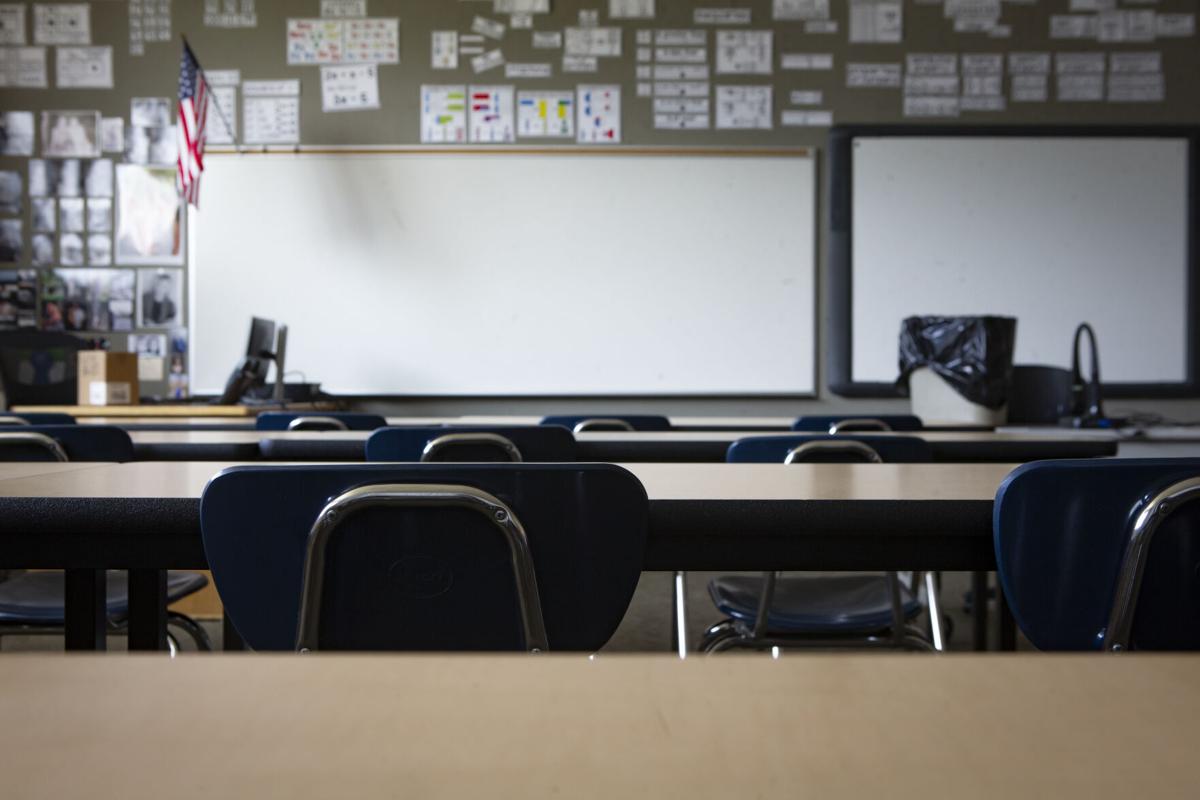 Classrooms will remain empty when school resumes this fall as students in the Hermiston School District will be distance learning. 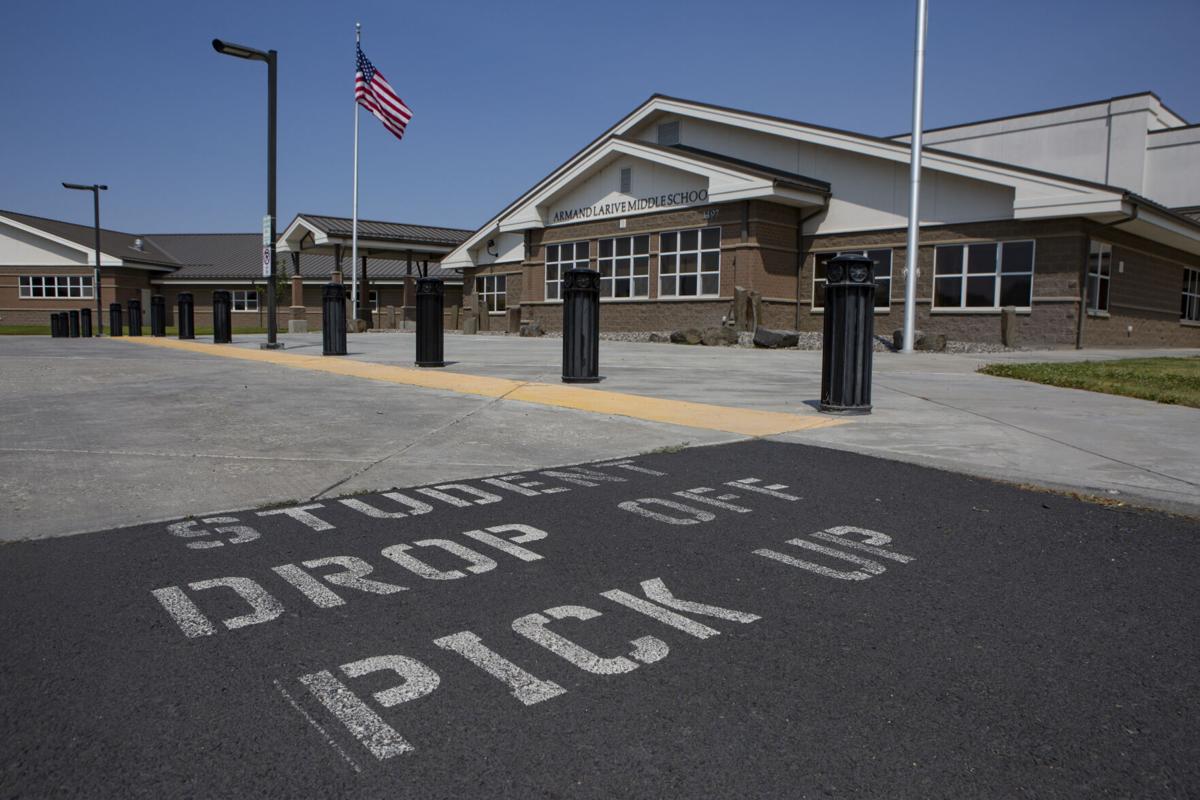 Student drop-off lanes at Armand Larive Middle School and other schools throughout the Hermiston School District will be empty of cars as the district transitions to distance learning for the fall.

Hallways at Armand Larive Middle School and other schools throughout Hermiston will be empty to start the school year as the district looks to begin the school year with distance learning.

Laptops charge in a classroom at Armand Larive Middle School in Hermiston on Tuesday, July 28, 2020. The Hermiston School District will begin the year with distance learning.

Classrooms will remain empty when school resumes this fall as students in the Hermiston School District will be distance learning.

Student drop-off lanes at Armand Larive Middle School and other schools throughout the Hermiston School District will be empty of cars as the district transitions to distance learning for the fall.

In addition to an online-only start, Hermiston School District will also start school later than usual in the fall.

During their Monday, July 27 meeting, the school board adopted an updated 2020-21 school year calendar that includes a few schedule changes, including delaying school starts from Monday, Aug. 24, until Tuesday, Sept 8.

The decision to delay the first day of school comes after the district announced on Thursday, July 23, that it will begin the school year with distance learning only, as a result of Hermiston’s rise in COVID-19 cases.

Hermiston School District likely wouldn’t be able to start the school year with in-person learning whether the board voted to or not. On Tuesday, July 28, the Oregon Department of Education released new guidelines for when schools are allowed to hold in-person classes. The guidelines state that counties must have a less than 5% positive rate of tests, and 10 or fewer new cases of COVID-19 per 100,000 people over a seven-day period, three weeks in a row, before in-person classes will be allowed.

According to a spreadsheet compiled by Rachel Alexander of the Salem Reporter, Umatilla County had 465.6 cases per 100,000 the week of July 21-28, and 420 the week before that.

Oregon must also have a less than 5% positive rate for COVID-19 tests, which has not happened in the month of July.

“The metrics released today will give our public schools, private schools, and communities the opportunity to make sound decisions based on the latest science and health data,” Gov. Kate Brown said in a news release. “They make a clear connection between the spread of the disease in a community, and statewide, and when a school may resume, or must halt, in-person instruction.

Superintendent Tricia Mooney said pushing the start day for schools will give educators an extra two weeks to prepare for the shift in teaching style. Surveys provided to teachers will help identify specific professional development needs that can be addressed within the two-week period.

“There is a lot to do, but I know our staff will rise to the challenge,” Mooney said. “This will be different than anything we’ve done before.”

Shifting the calendar would also mean pushing semester breaks and the end of the school year forward to June 14, 2021.

“It’s still our plan to offer the same courses, but some things will look very different,” she said.

In terms of what day-to-day distance learning will look like for primary and secondary schools, Mooney said the district will try and maintain as much of a schedule as possible.

For secondary schools, distance learning will look more like a full school day that follows a “bell schedule” in terms of structured class times and courses. At the secondary level, attendance also will be taken for each period.

In the elementary schools, schedule development is still in process. Although students will be working remotely, teachers will be instructing via video from their classrooms.

Grading practices will return to the district’s usual practices, unlike spring term when the district switched to a complete/incomplete model.

The move to distance learning for fall does not affect staff size. As of now, the district plans on retaining staff. Mooney said at this point it is the district’s plan to not implement furloughs or cuts in force. However, positions may change in terms of duties.

The district is still required to provide lunches, but details on what that system will look like is still underway. As for sports programs and extracurriculars, the district is still awaiting guidance from the state on how to proceed, but it is likely that the season will be pushed back. The Washington Interscholastic Activities Association, of which Hermiston is a part, has tentatively planned to move football to March.

In June, the state issued guidance for early learning and child care programs that included three possible instruction methods — on-site, hybrid and distance learning — for the 2020-21 school year. Each school district will make their own decisions regarding which instruction methods to utilize, depending on the progression of COVID-19 and guidance released by the Department of Education.

“With heightened concern related to the COVID-19 virus and indoor gatherings, Hermiston School District will begin the year with a comprehensive distance learning model, with the intent of moving to a hybrid model when it is safe to return students to the classroom,” Mooney said.

Mooney stated it is the district’s goal to have students return to face-to-face instruction as soon as possible, if it can be done safely.

“We have a large percentage of staff that want to be in school and with our students,” Mooney said. “But it is not an option right now to plan for face-to-face instruction.”

What tipped the scale, according to Mooney, is the guidance stated that within the coming weeks a set of guideposts, protocols and public health indicators will help determine the best instructional model for a given ZIP code or county. Since COVID-19 rates in a given county will help inform school decisions regarding distance learning, Mooney said it was clear that Hermiston was not ready to move to face-to-face learning.

“That language in light of the fact that Umatilla County is a hot spot in Oregon, and Hermiston being the largest community in Umatilla County and having the most cases, we felt it is pretty clear that our model to begin school is to be comprehensive distant learning,” she said.

The guidance, which includes protocols for daily health checks, group sizes, Personal Protective Equipment for children and adults, daily activities, cleaning and response protocols for possible and confirmed COVID-19 cases, will be applied statewide once it is finalized on Friday, Aug. 14.

“Much like K-12 schools, we know that our early childhood programs won’t look the same this fall. But, one thing is clear: We know that kids need safe, caring, quality environments while their parents are at work,” stated Gov. Kate Brown in a July 23 press release.

Umatilla School District had been planning a hybrid model of instruction for the fall, giving students the option to attend in-person classes four days a week if desired.

In an email after the state’s announcement, Superintendent Heidi Sipe released an outline of what the district’s online-only learning will look like until Umatilla County schools are allowed to have students in the classroom.

Elementary school students will remain with the teacher they have already been assigned, and will be given a schedule of times to check in online for video learning. They can participate in the video sessions with their teacher live, or watch a recording of the session at their convenience. Teachers will have times available on Friday to help students individually or in smaller groups as needed.

Students in grades six through 12 will function similarly, but with multiple teachers for the various core classes and electives they signed up for. They will turn in homework through Google Classroom and other online tools, and have scheduled check-ins with their teachers.

“Some lessons may be modified, but families should expect rigor and expectations equal to the on-site classroom,” the plan stated.

More information will be released at a later date on how and when Chromebooks, routers and Wi-Fi hotspots can be checked out. For now, the district asks everyone who checked out devices in the spring to return them for cleaning and upgrades. Devices may be dropped off at the district offices July 28-30 from noon to 7 p.m. or Aug. 3-6 from 8 a.m. to 7 p.m.