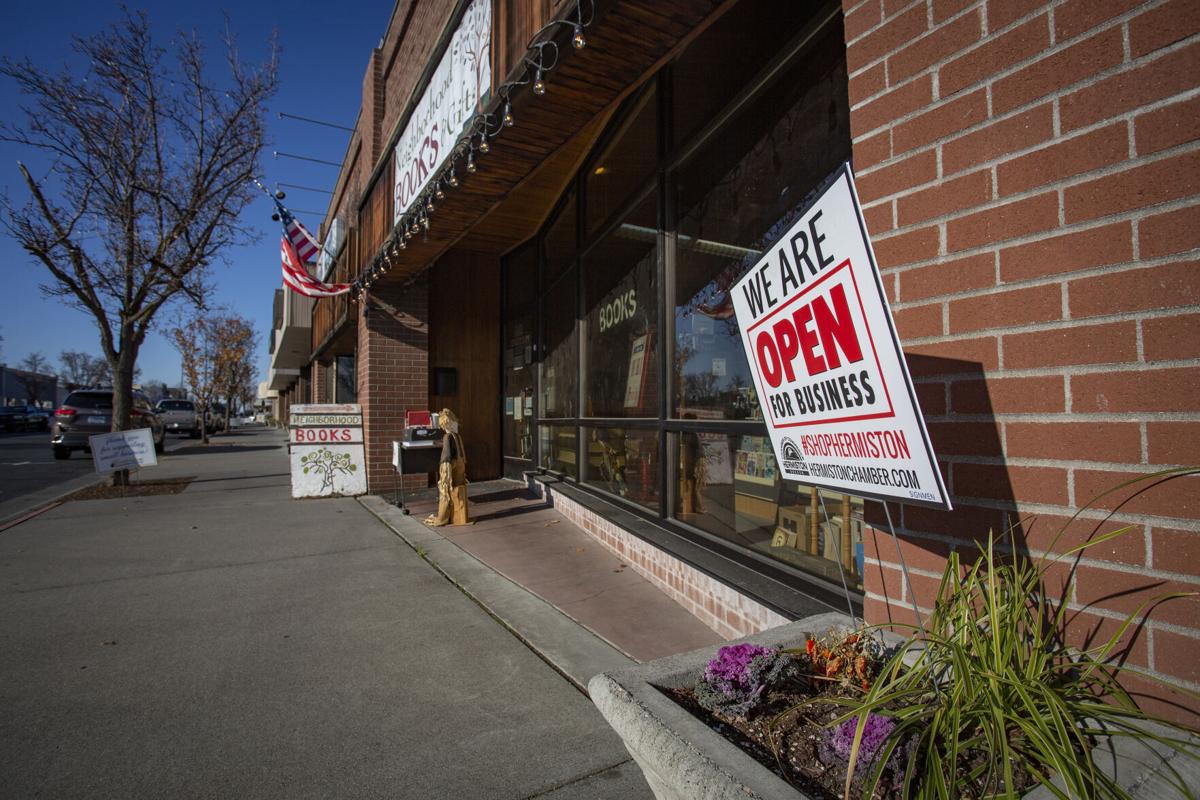 Signs featuring the Hermiston Chamber of Commerce advise shoppers that businesses are open on Friday, Nov. 20, 2020. 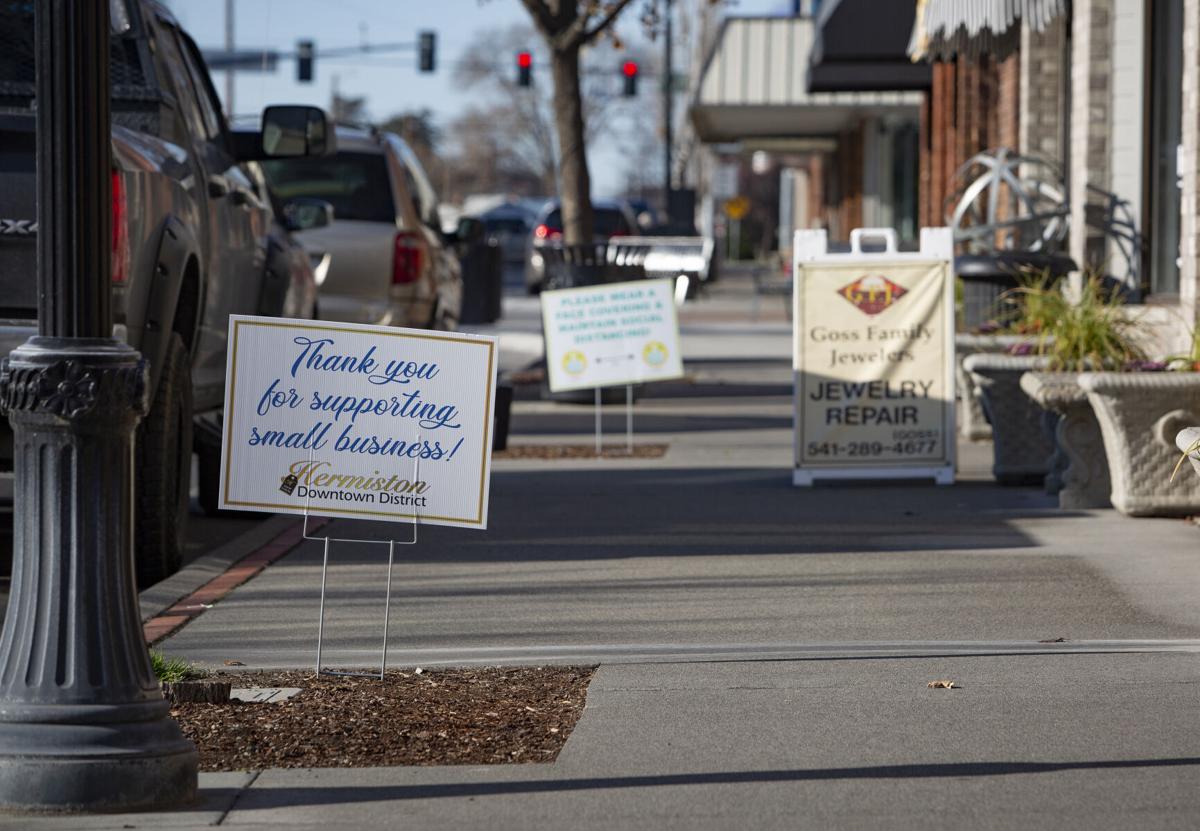 Signs for the Hermiston Downtown District thank shoppers for shopping at small businesses on Friday, Nov. 20, 2020.

Signs featuring the Hermiston Chamber of Commerce advise shoppers that businesses are open on Friday, Nov. 20, 2020.

Signs for the Hermiston Downtown District thank shoppers for shopping at small businesses on Friday, Nov. 20, 2020.

Like everything else, the holiday shopping season will look a little different this year.

Despite the challenges of operating during a pandemic, however, local businesses say they’re still gearing up to serve customers on Black Friday and Small Business Saturday.

Julie Lara, who co-owns JB Brick Company in Hermiston with her husband, said their LEGO store had its best sales days of the year on Black Friday and Small Business Saturday last year after opening a few months prior. They will be offering holiday deals again this year, while sticking to rules the state has in place about masking, sanitizing and keeping stores at 75% capacity during the current two-week, statewide “freeze” to crack down on the spread of COVID-19.

She said the store has been popular during the pandemic, as kids have been “cooped up and bored.” Some customers have told her they are using LEGOs purchased at the store as rewards for their children doing well in their online schooling.

“I don’t want to say we’re essentially, exactly, but for parents’ sanity we might be essential,” she said.

Despite doing well now, she said in April sales were “dismal” as retailers were ordered to offer curbside pickup only, and people were hunkering down at home. Since then, business owners have had to keep track of ever-changing restrictions as Umatilla County has gone through various phases, and Lara said she has appreciated help from the Hermiston Chamber of Commerce.

“The chamber has been awesome at keeping us abreast of changes, and what it means for your specific type of business,” she said.

Nadia Monroy is opening the doors to her new business for the first time on Wednesday, Nov. 25, and said she hopes to start off on the right foot with the surge in sales that usually comes for retailers during the holiday season.

After years of selling homemade soaps and other items at area bazaars, she is opening Bella Grace Boutique at 158 E. Main St. in Hermiston. The shop will sell women’s clothing, accessories and home décor.

“I’ve always dreamed of opening my own storefront, and finally that dream came true,” she said.

Monroy said she knows it’s a risky time to be opening a business, but she has faith that it will work out. The hardest part, she said, is that businesses never know when another set of mandates relating to COVID-19 might come along and what they will look like.

“It has been nerve-racking, because I was afraid I wasn’t going to be able to open because of the freeze,” Monroy said.

Tammy James of 60 Minute Photo in Hermiston agreed that the uncertainty has added to the difficulty of the shutdowns this year. Under the current restrictions the photo studio can still operate, for example, but Gov. Kate Brown has warned that further action could be taken at the end of the freeze if hospitalization numbers in the state are not trending in the right direction.

Usually, 60 Minute Photo has Santa visit every weekend in December, and families show up unannounced, forming long lines as they wait their turn. This year, appointments with Santa must be scheduled in advance in 10-minute increments, with time in between each session for sanitizing everything. They’re also offering holiday mini-sessions and other services, with COVID-19 protocols in place.

“Even the front counter, every time someone walks out, we’re re-sanitizing the counter,” James said.

She said the year has been difficult on businesses, but customers from Hermiston and the surrounding areas have been loyal, and 60 Minute Photo staff have tried their best to protect those customers’ health in return.

Kimberly Rill, executive director of the Hermiston Chamber of Commerce, said the chamber has been doing what it can to promote shopping locally during the holiday season.

The chamber has been promoting businesses on its Facebook page and recently emailed out a list of what restaurants were providing takeout or delivery during the two-week freeze.

Rill said the main thing she’s hearing from local businesses right now is that they really want to do their best to follow the rules that have been set for them so that their business and others can stay open. She said in light of the 75% capacity rule currently in place, many retailers are planning to spread out their deals over several days instead of having one big event.

She said she’s “so proud” of local businesses for the way they’ve adapted this year.

During their Nov. 9 meeting, the Hermiston City Council issued a proclamation in support of Small Business Saturday. The proclamation stated that according to the Small Business Administration, small businesses were responsible for 64.9% of net new jobs created from 2000 to 2018. It also stated that 62% of U.S. small businesses “reported that they need to see consumer spending return to pre-COVID levels by the end of 2020 in order to stay in business.”

In addition to small businesses, the weekend after Thanksgiving represents a major sales spike for “big box” retailers as well. This year, many of those retailers have announced they are also spreading out their deals beyond just Black Friday, and offering sales online.

Walmart, for example, has been emphasizing a Deals for Days sale rather than a traditional Black Friday event. The promotion was rolled out in three phases — Nov. 4, Nov. 11 and Nov. 25. While the bulk of its holiday deals are available online and by pickup throughout the month, the company has stated on its website that it will be offering some in-store Black Friday deals starting at 5 a.m. on Friday, Nov. 27. During that sale, the website states, store capacity will be reduced and customers will be asked to wait in a socially distanced line outside the store for their turn to enter.