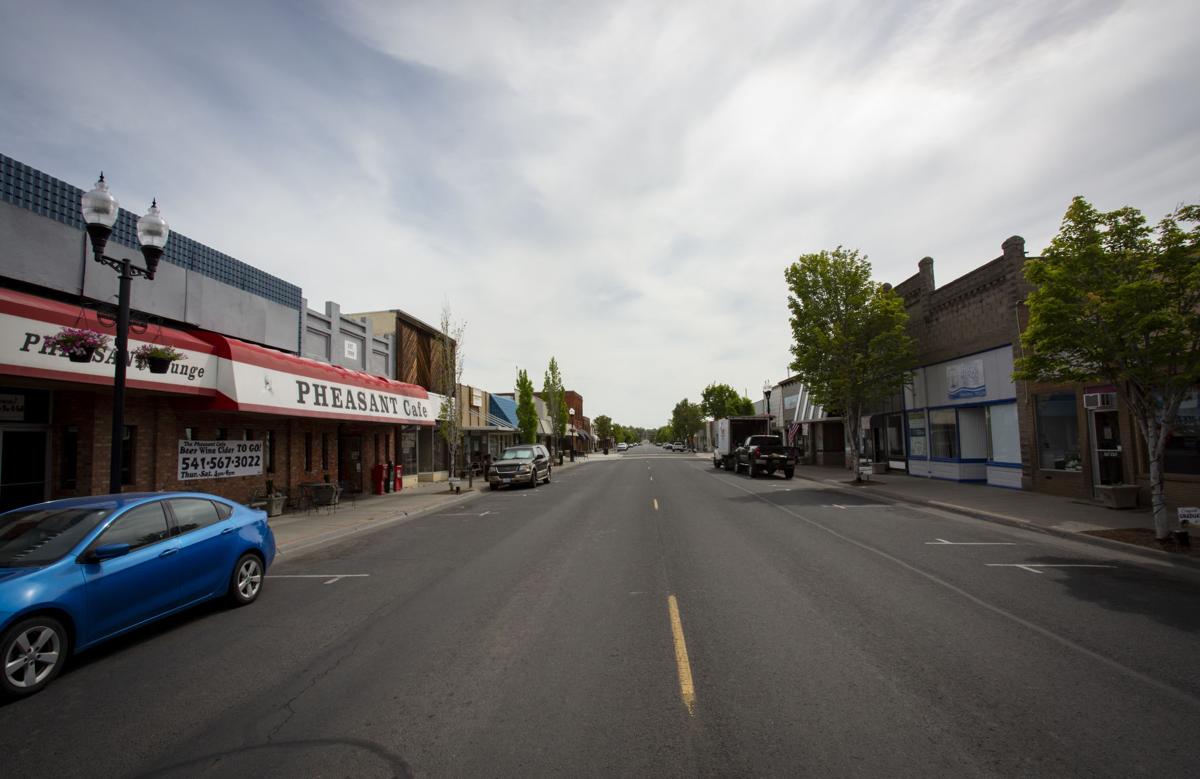 The Pheasant Bar and Grill is among a group of Hermiston businesses and residents pushing to reopen the town. 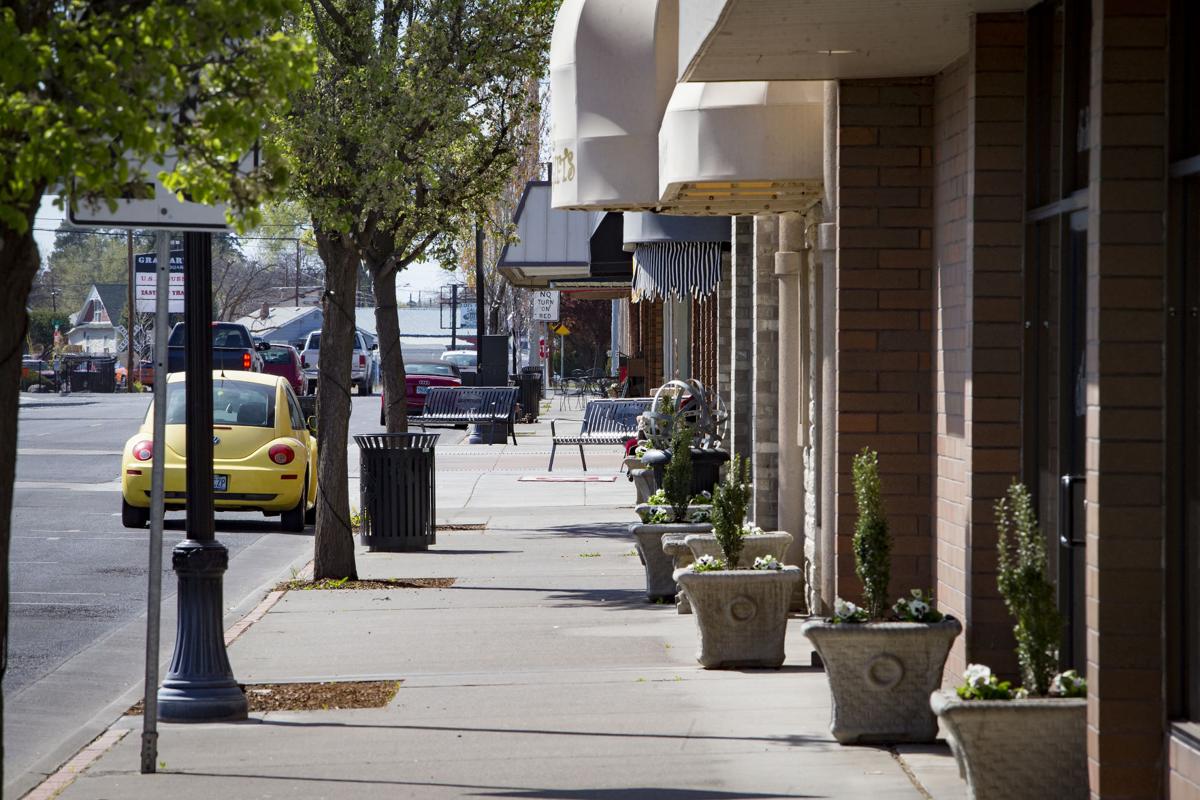 The sidewalks in downtown Hermiston sit empty on a Friday afternoon in early April. A group of Hermiston residents is pushing to reopen the town and put an end to social distancing requirements.

The Pheasant Bar and Grill is among a group of Hermiston businesses and residents pushing to reopen the town.

The sidewalks in downtown Hermiston sit empty on a Friday afternoon in early April. A group of Hermiston residents is pushing to reopen the town and put an end to social distancing requirements.

As the first phase of reopening businesses in Oregon approaches on May 15, some Hermiston business owners want to see the government go much farther.

They have coalesced around a Facebook page called “Reopen Hermiston & Eastern Oregon.” There, Hermiston-area residents share YouTube videos that support putting an end to social distancing — some of which have since been removed from social media platforms that say they spread false information — and news stories about business owners in other parts of the country that have defied shutdown orders.

The group had more than 900 members as of Monday. Members have been talking about holding an in-person rally in Hermiston in defiance of restrictions on large gatherings, and Colin Hodges, who runs the page, said the date they are currently looking at is May 30.

“Where our heads are really at with this thing, is we’d like to see congregations come back, gatherings come back,” Hodges said. “Things like charity dinners, lifestyle events, the fair and rodeo.”

Umatilla County has submitted a reopening plan to Gov. Kate Brown, which county commissioners have agreed won’t happen without state approval. That plan calls for allowing businesses, such as hair salons, to reopen with social distancing requirements in place on May 15. A second phase would open up schools and allow gatherings of up to 50 people, while the third phase would allow gatherings of up to 250 people.

Brown has stated that counties will only be able to move on to the next phase once they have shown a steady decrease in COVID-19 hospitalizations and emergency room visits for respiratory illnesses over 14 days. She said the ban on mass gatherings, such as fairs and sporting events, will stay in place until at least September.

The idea behind a slow rollback of restrictions is to keep cases from rising to the point that hospital resources are overwhelmed and there are not enough ventilators or ICU beds to treat everyone who needs them, as has happened in some parts of the country. Fatality rates of the virus have been higher in those circumstances.

Hodges said he doesn’t believe Umatilla County should wait any longer to allow gatherings and reopening of businesses and churches, however.

And when they do open, he said, they shouldn’t be required to take down peoples’ information so they can be contacted and asked to quarantine in the event they were exposed to the virus. He also doesn’t want to see people required to wear masks to do their jobs, or to be vaccinated in order to enter an establishment, once one is available. He called those type of safety measures recommended by public health experts “medical tyranny,” and said efforts to track the virus are turning America into a surveillance state.

“There has never been a government in history that has taken rights away from people, and then given them freely back,” he said. “It’s never happened, and we don’t think it will here.”

He rejects the idea that people who are protesting for businesses to reopen are “selfish,” a message he said he is getting a lot on social media from people concerned about the increased spread of COVID-19 expected from relaxing social distancing rules.

He said he is trying to protect peoples’ constitutional rights, and protect people from negative effects of social distancing, such as increased rates of depression and abuse.

“People are being cut off from the things that keep them healthy physically and spiritually,” he said.

Cherie Bumpaous, who owns The Pheasant Bar and Grill, said business there is down 95% since the governor ordered bars and restaurants to switch to takeout and delivery only. She said she wants to see businesses be allowed to reopen, even if there have to be some extra sanitation measures in place.

Delivery would still be available for those who are at higher risk of complications from COVID-19, such as the elderly or those with conditions such as asthma or high blood pressure, as well as those who live with or work with them.

“If you’re afraid to get sick, stay home,” Bumphous said. “People who are healthy and not afraid should be able to go out and about.”

She said she supports Hodges’ efforts to ask Umatilla County and the city of Hermiston to hold town hall meetings about COVID-19 regulations, and believes that businesses should hire an attorney if they need to in order to fight regulations they feel are unconstitutional.

Tricia Munoz, who runs Yo Country Frozen Yogurt with her husband and is also an independent medical billing specialist, said she joined the Reopen Hermiston movement because she believes all COVID-19 restrictions need to be lifted.

“I feel they’re just an overtaking by the governor, and she’s abusing her power and allowing small businesses to go under,” she said.

Munoz said she had to lay off employees and let product go to waste. Even if businesses are allowed to reopen, Brown’s social distancing restrictions are too onerous, she said, including a ban on self-serve that would require extra employees for Yo Country to implement.

“It would be almost $24 an hour just paying for labor,” she said. “You think we’re going to sell that much yogurt every hour?”

The Centers for Disease Control and Prevention has reported 79,756 deaths from COVID-19 in the United States as of May 11, which is higher than yearly flu mortality numbers, but Munoz said she believes the government is falsifying COVID-19 numbers.

“If people are worried, then that’s their right to stay home and self-quarantine,” she said.